Boris Johnson’s Jewish moments, from a broken menorah to a change in Israel-UN policy 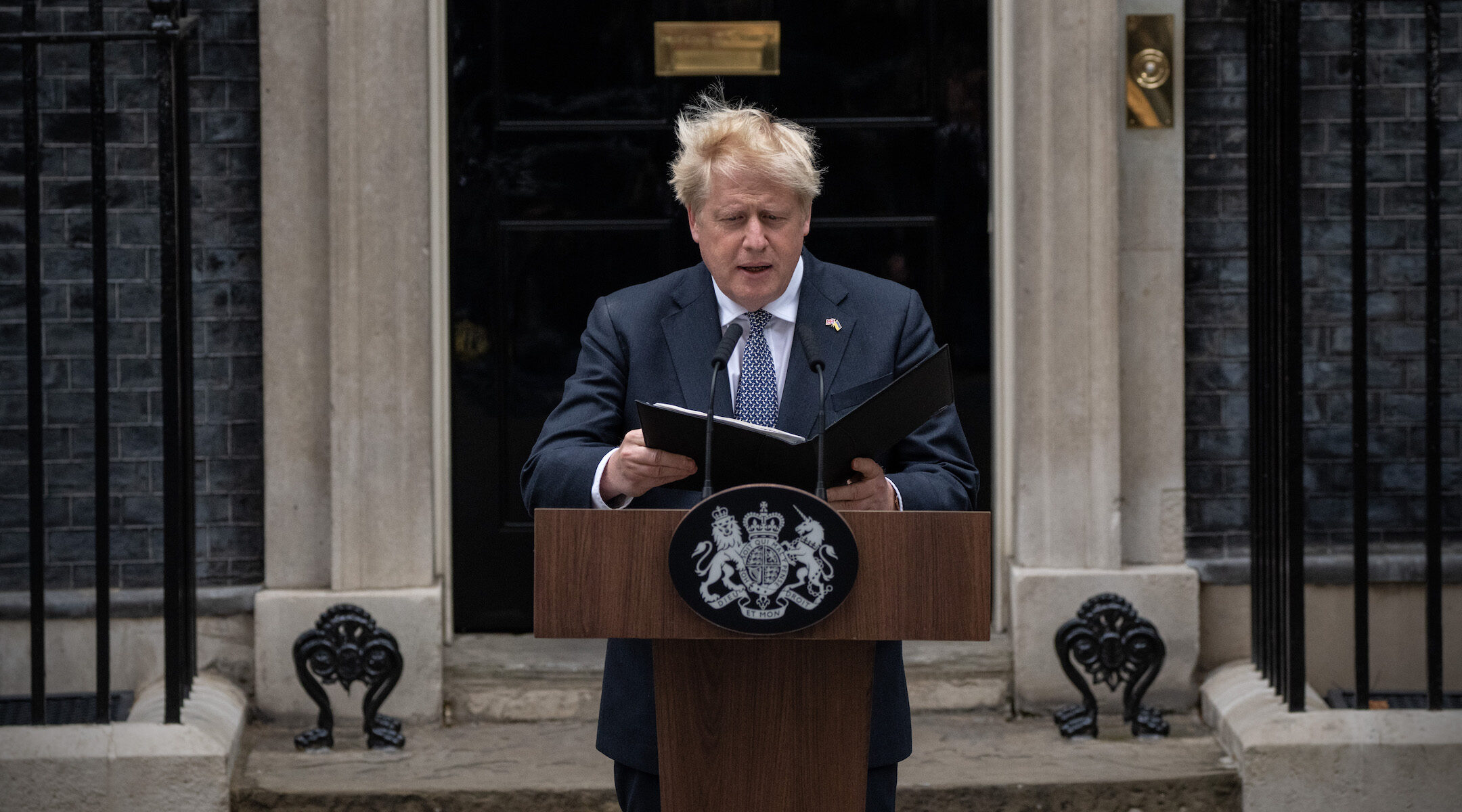 (JTA) – For many Britons, Boris Johnson’s tenure as prime minister will have been defined by scandals like the one that forced him to resign on Thursday.

For Jewish Britons, the memories might well include a broken menorah.

Elected in 2019, the Conservative Party leader announced Thursday that he would step down after his cabinet collapsed amid his latest scandal — the way Johnson handled the case of a senior official who had been accused of sexual abuse. Johnson has also come under criticism for his violations of the United Kingdom’s COVID-19 rules and his alleged failure to report some meetings with Russian oligarchs (notwithstanding, Johnson has been relatively tough in his criticism of Russian President Vladimir Putin.)

Johnson said he intends to stay on until his party holds an internal vote for a successor, leaving open the question of when and whether he will actually vacate the office.

When he does, Britain’s nearly 300,000 Jews are likely to remember him as someone whose leadership had little lasting effect on their status. Johnson’s predecessor, Theresa May, led the U.K.’s adoption of the International Holocaust Remembrance Alliance’s definition of antisemitism, blacklisted Hezbollah as a terrorist group and lifted the unofficial boycott on official visits to Israel by senior members of the British Royal House.

In contrast, Johnson’s tenure featured few changes, for better or worse, on the issues that many community members hold dear, according to Herschel Gluck, an influential Orthodox rabbi from northern London. He noted that under Johnson, British authorities did strengthen enforcement of rules that haredi Jewish schools in the United Kingdom seem reluctant to uphold.

“Johnson has charisma, spoke generally in positive terms and gave the feeling that the community was dear to his heart, which a lot of people liked. But I can’t think of a single area where he actually delivered,” Gluck said.

“He was a friend to Israel with a warm attitude to the Jewish community,” she said. “He made sure there isn’t a deterioration when it comes to the government’s attitudes to Israel and the Jews, and that’s already a lot.”

Whatever his scorecard on Jewish issues, Johnson certainly provided some memorable Jewish moments since 2019.

A rare visit to the Belfast synagogue

During a coalition-building visit last month to the offshore British territory, Johnson, who is a key promoter of the U.K.’s departure from the European Union, visited the Belfast synagogue and vowed to sort out the kosher market problems that Brexit helped create. The issue has not been solved as of yet, but its acknowledgment was an unusual recognition of the plight of a small minority by a politician who has sought to minimize Brexit’s negative effects.

During a Hanukkah reception in London last year, Johnson enthusiastically waved around a delicate menorah that he had just been given as a token of the appreciation of the Conservative Friends of Israel group. The object’s candle holders went flying across the room. Johnson, true to his bumbling public image, looked sheepish while the menorah was reassembled. Yair Lapid, who was then Israel’s foreign minister, laughed at the situation, Johnson, or both. “I guess you’re not supposed to wave a menorah about,” Johnson was heard mumbling.

In a 2021 video greeting for Passover, Johnson, whose maternal great-grandfather, Elias Avery Lowe, was a Moscow-born Jew, demonstrated some deep familiarity with Jewish customs and even used a Yiddish word, kvetch — which means to whine — to refer to some of what goes on when Jewish families sit around the Passover Seder dinner table.

A shift on Israel and the UN

As foreign secretary, Johnson spoke out pointedly against what he described as anti-Israel bias at United Nations forums. He also shifted the position of the United Kingdom on items dedicated to criticizing Israel alone, moving it from “yes” to abstention and finally to a “no.” In 2021, he went one step further and stated that the United Kingdom was opposed to the Palestinian bid for an investigation into alleged war crimes by Israel. “This investigation gives the impression of being a partial and prejudicial attack on a friend and ally of the U.K.,” he said. His position furthered the reversal started by his predecessor May, which ended decades of the Foreign Office’s endorsement of resolutions and initiatives hostile to Israel.

Whereas his predecessors often spoke at events featuring Holocaust survivors and commemoration activists, Johnson last year organized an hour-long video call with a survivor and a death camp liberator in which his role was to listen. Johnson sat on the edge of his seat as he heard the stories of Auschwitz survivor Renee Salt and a Bergen-Belsen liberator Ian Forsyth. As he interviewed the two elderly speakers, he stopped to inquire about certain details (“You must have been 14 by then?” he asked Salt) and told the two that what they had told him was “one of the most powerful things I’ve ever heard.”