A Holocaust survivor celebrates her 100th birthday at a Queens synagogue 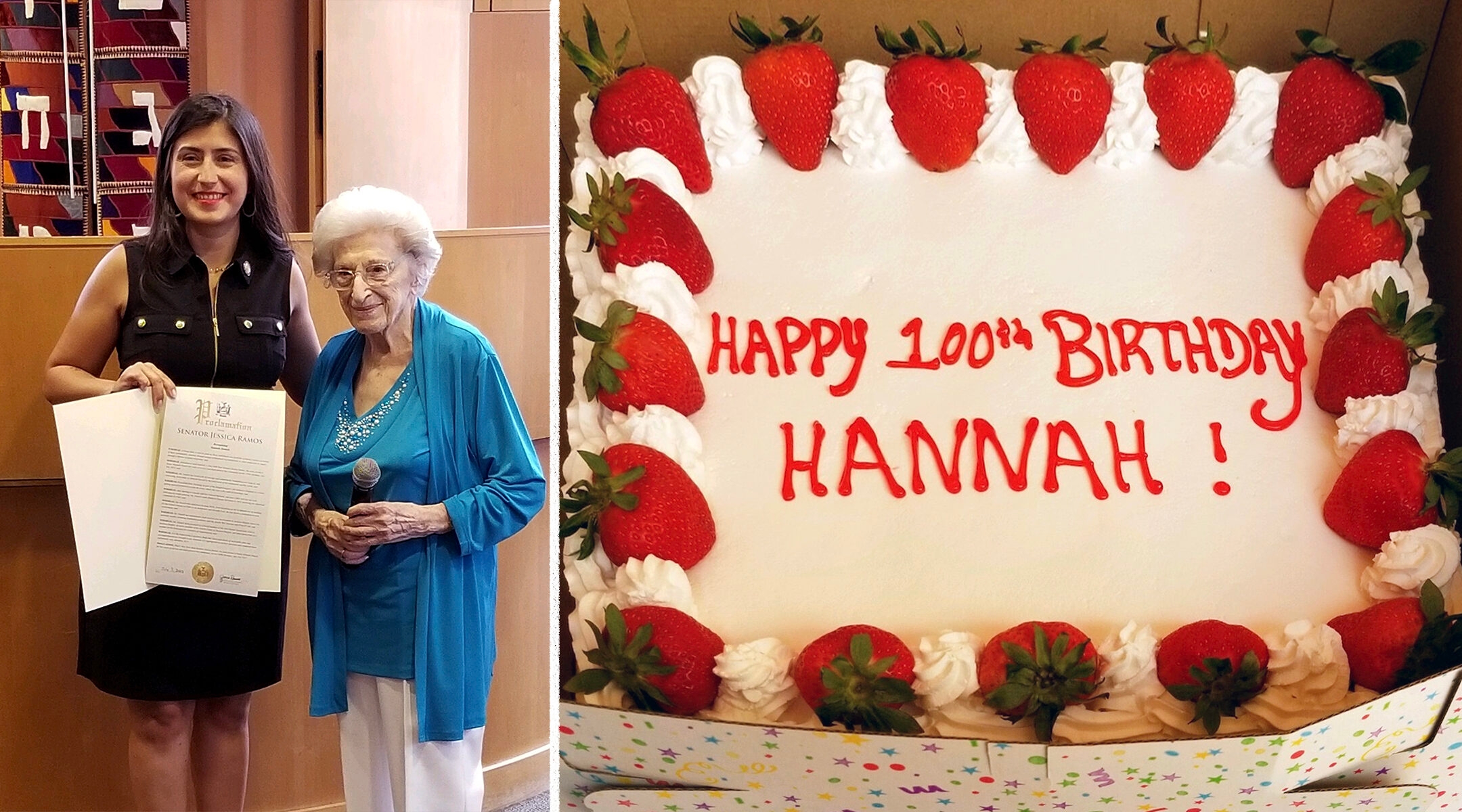 (New York Jewish Week) — Holocaust survivor Hannah Deutch, who escaped Germany via the Kindertransport in 1939, celebrated her 100th birthday this past Shabbat at the Jewish Center of Jackson Heights in Queens — one of her favorite places in New York.

“She’s a regular Shabbat service attender,” said the congregation’s president, Suzanne Knobel. “If the weather is good, Hannah is here.”

At the party, which took place during a kiddush after Shabbat services on Saturday morning, around 50 people celebrated Deutch’s miraculous and tenacious life. There was a large cake, and Deutch was honored with speeches from State Senator Jessica Ramos as well as representatives from the offices of City Council member Shekar Krishnan and Queens Borough President Donovan Richards.

“Today we are here to celebrate Hannah Deutch, who answered God’s call. Today, we recommit ourselves to the fight against hate, ignorance, and intolerance in all of its forms. Today, we celebrate community and humanity. Today, we celebrate life,” Chuck Park, speaking on behalf of City Councilmember Krishnan, who represents Elmhurst and Jackson Heights, Queens, told the crowd. “Hannah’s exemplary life isn’t just a history lesson. It also stands as a living claim on our conscience.” Deutch speaks with an emissary from the office of the Queens Borough President. (Lenore Skenazy)

Deutch is an active speaker on the Holocaust education circuit in New York schools and universities. Over the past 40 years, she’s frequently shared her story of survival, working with several Jewish and Holocaust memorial organizations including Jewish War Veterans, Hadassah and B’nai B’rith.

Born Hannah Kronheim in Dusseldorf on July 3, 1922, Deutch moved to Bochum, Germany when she was 2 years old to be raised primarily by her grandparents. She was 16 when German Jews experienced the horrors of the Nazi-led pogrom known as Kristallnacht on Nov. 9, 1938 — Deutch still vividly remembers waking up in the middle of the night when the synagogue behind her home was set ablaze.

“A 16-year-old then was not like a 16-year-old here [now] in the United States,” Deutch told the New York Jewish Week via telephone from her Queens apartment. “We were brought up very shielded. We were really kids.”

In February 1939, her cousin helped organize her escape to England via the Kindertransport, a series of rescue efforts that brought mostly Jewish children to Great Britain from Nazi Germany between 1938 and 1940. As one of the oldest members of the Kindertransport, she acted as a caretaker for the younger children on the journey. But when they arrived in London, most children were adopted or spoken for — except for her, she remembers. “I’m standing in that big hall all by myself. Nobody there,” she recalls. “I said, ‘Dear God, what has happened? Nobody is here for me. Nobody wants me. How am I going to live?’”

But she did live. Deutch was set up with a room in a boarding house, and, as she had received an advanced high school education in Germany, was able to secure a job as a nurse in a hospital. Within six months, she said, “I was just like a limey.”

Deutch’s mother and stepfather also managed to escape on a boat leaving from Holland to Chile, while the rest of her family — aunts, uncles and grandparents — remained behind in Germany and perished in concentration camps.

As the war broke out in England in the fall of 1939, Deutch and other German refugees were moved to a refugee internment camp in Isle of Man, where she continued her studies and work as a nurse. She enlisted in the British army in 1941, where she worked as a nurse treating war casualties in London until 1944. She vividly remembers the Blitz in London, and at one point, the apartment building she was living in, which was near the home of a duke, was bombed out.

“England saved my life, and I had to repay them somehow,” she said. “I was the guinea pig. I had a letter from the Home Office stating that if I was successful, other refugees could become nurses for England, too.”

While in the army, Deutch was an active member in the Jewish Forces Club, where Jewish officers from all over the world would convene and socialize — Canadians, Americans, British, and freed French, German and Polish refugees. “We all spoke Yiddish,” Deutch said. “It was amazing.”

Deutch became engaged to Daniel Deutch, a Canadian officer, on her 21st birthday, and soon married him in a large wedding in London, which made her a Canadian citizen. She moved to Canada with her husband in 1944 to raise her first son. “Everyday I used to go to the Canadian Jewish Congress to see if anybody from my family survived,” she recalled. Of those trapped in Europe, only a second cousin, who lived in Holland, remained alive. “Nobody survived. Nobody.”

Deutch wouldn’t know what became of her family members until decades later, when she visited the United States Holocaust Memorial Museum in Washington, which had “all the information I didn’t want to know,” including names, birthdays and the location and date of family members’ deaths. “It was unbelievable. It boggles the mind,” she said. 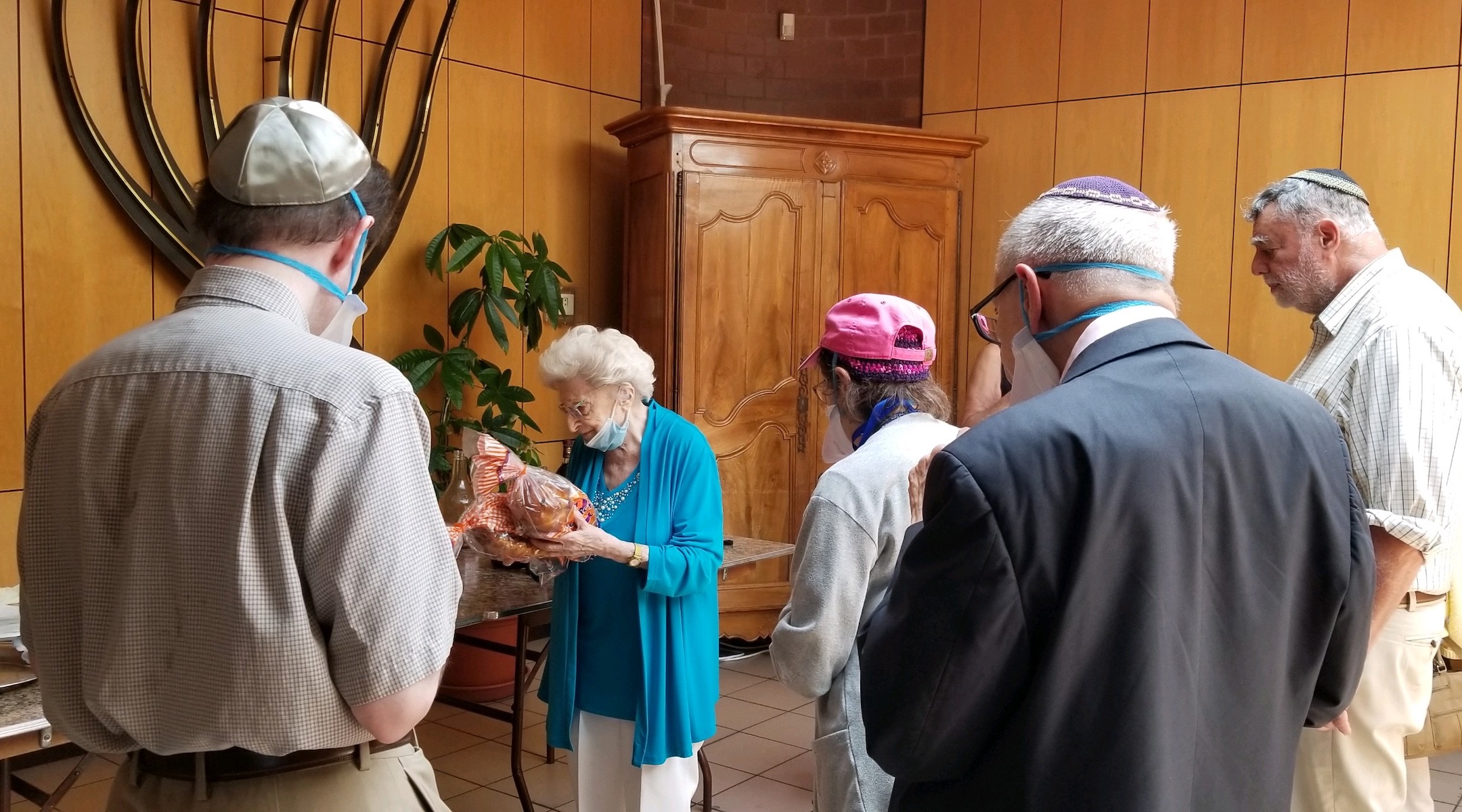 Hannah Deutch, a Holocaust survivor who escaped Germany in 1939, says the blessing over the challah at her birthday celebration at the Jewish Center of Jackson Heights in Queens, New York, July 9, 2022. (Lenore Skenazy)

In 1949, Deutch’s husband died from injuries he incurred during the war, and she was alone yet again at age 28, this time with two young boys. She moved to Chile to reunite with her mother and stepfather and quickly learned Spanish to find a job as a translator and accountant.

Deutch moved to Elmhurst, Queens, in 1962, and to Jackson Heights in 1979, where she has lived ever since. Her sons, one of whom joined the Israeli army, now live in Canada and New Hampshire. Since she retired in 1984, she has made it her life’s purpose to continue Holocaust education and stay active in the Jewish community in Queens.

“We all became friends, and then we became a family,” Deutch said of the Holocaust survivor network she found in New York City. “The teaching of the Holocaust has kept me busy the last 38 years.”

Deutch has also been a member of the Jackson Heights Jewish Center for more than 40 years. “We cherish all our members but Hannah is special,” Knobel told the New York Jewish Week. “Not everybody is fortunate to be in very good shape, to make it to age 100 and to be aware and with it, and be able to share her experiences with us. “We value her friendship and her membership.”