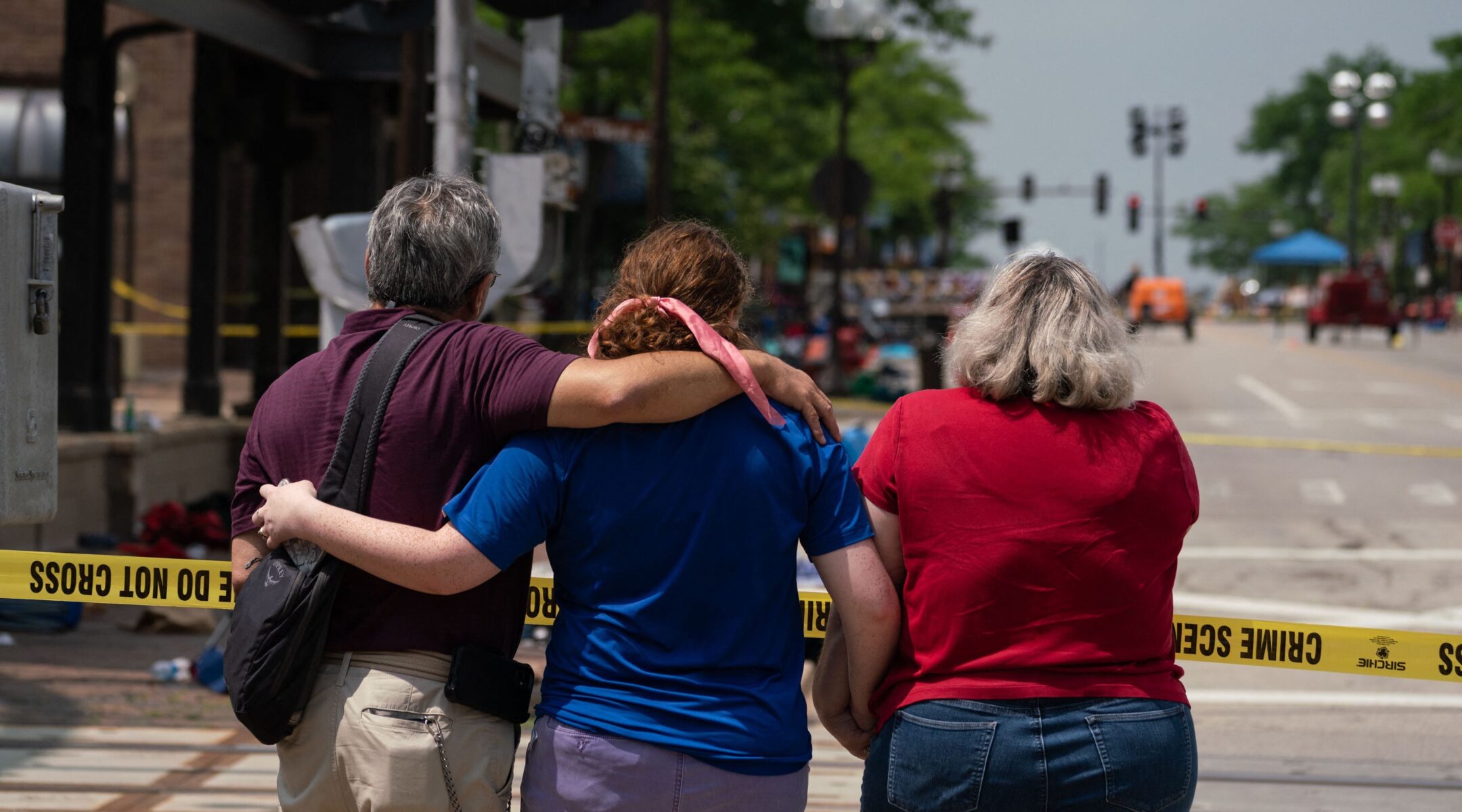 A family embraces while observing the scene of a mass shooting at a July 4th parade in downtown Highland Park, Ill., July 5, 2022. (Max Herman/AFP via Getty Images)
Advertisement

When the newly established Community Security Initiative in New York began offering active shooter response trainings shortly after it was founded in February 2020, there seemed to be limited interest among synagogues and local Jewish institutions.

Over two years, only about five area Jewish institutions underwent such trainings, according to Mitch Silber, executive director of the Jewish community program.

But then one Shabbat morning this past January, a British Pakistani man took four people hostage at Congregation Beth Israel in Colleyville, Texas, threatening their lives for over 11 hours before the rabbi orchestrated a daring escape.

At an opportune moment, Rabbi Charlie Cytron-Walker yelled at the hostages to run and threw a chair at the perpetrator, enabling him and the two remaining hostages (one had been released hours earlier) to escape alive. An armed tactical team then entered the synagogue and fatally shot the terrorist.

Afterward, Cytron-Walker said he and the other hostages survived because of the active threat safety training they received.

“For the past few years, we’ve had training — it’s not training, it’s, I guess, courses, instruction — with the FBI, with the Colleyville Police Department, with the Anti-Defamation League, with Secure Community Network, and they really teach you in those moments that if you’re when your life is threatened, you need to do whatever you can,” he said in an interview with CBS TV. “To get to safety you need to do whatever you can to get out.”

The Colleyville episode reverberated in the New York Jewish community. In the days that followed, the Community Security Initiative received about 75 requests for active threat training from leaders of synagogues, day schools and other Jewish institutions, according to Silber, who previously worked on an initiative assessing the threats to Jewish communities in Europe for Jewish businessman and philanthropist Ronald Lauder and as director of intelligence analysis for the New York City Police Department.

Amid heightened worries about threats to the Jewish community, Silber’s organization — established by UJA-Federation of New York and managed in partnership with the Jewish Community Relations Council of New York — has worked to meet that demand and provide those who work in and use Jewish institutions with the know-how to feel, and hopefully be, less vulnerable to such attacks.

The deadly July Fourth parade shooting in the heavily Jewish Chicago suburb of Highland Park, Illinois, underscores the dangers not just to Jews, several of whom were among the victims, but to Americans anywhere.

The Community Security Initiative has eight people who provide trainings to synagogue leaders, clergy, teachers and congregants, among others. During a typical session, an instructor reviews past shooting incidents, such as the 2019 attack in California at the Chabad of Poway synagogue, where one woman was killed and three others were injured.

“Among a number of issues, we discuss what have proven to be the behaviors and the actions, taken by people in these situations that have been predictive of a higher possibility of survival,” Silber said.

The instructors discuss creating “a culture of security” — which means, for example, establishing a security committee that might include clergy, maintenance staff and local law enforcement.

“When you think about your favorite athlete or team or musician, do they get good at what they do and then stop practicing? No, certainly not,” Bill Hayes, the Community Security Initiative’s Westchester and Bronx regional security manager, said during a recent virtual training. “Likewise, security is not a spectator sport. It requires the full involvement of the entire community.”

Hayes and others also emphasize the importance of access control.

If an assailant manages to enter the building, the choices are: “Run. Hide. Fight” and they are not necessarily sequential in their utility.

The goal is to “buy time and save ourselves until police come,” said Liron Filiby, regional security manager for Long Island.

“If you evacuate, where do you go?” Filiby said. “If you’re hiding, how do you do that? How do you close the door? Do you have a lock on the door? If you’re fighting, how do you fight? Now, we are not teaching people how to fight. We are teaching them the principle of where to position themselves against an attacker to delay his entrance to the safe shelter-in-place area.”

UJA-Federation of New York decided to invest in the Community Security Initiative after the 2018 shooting at the Tree of Life synagogue in Pittsburgh, which left 11 victims dead in what was America’s deadliest-ever antisemitic attack, as well as the attack against a Chabad in Poway, California, that left one dead.

But those assaults didn’t result in the same demand for active threat trainings, Silber observed. He conjectured that perhaps the outcome in Pittsburgh was so horrific that Jews around the country didn’t realize the utility active shooter trainings can have.

“Even though they had had some training,” Silber said of the Tree of Life congregation, “and even though that mitigated it from being worse, I don’t think the message that the broader Jewish community in the United States took from that was: Do this training. It will be helpful.”

But in Colleyville the circumstances were different: The rabbi’s actions clearly made a difference.

“I think that unfortunately being Jewish in 2022 in the United States means that you need to be prepared for events that that have, unfortunately, become way too common,” Silber said. 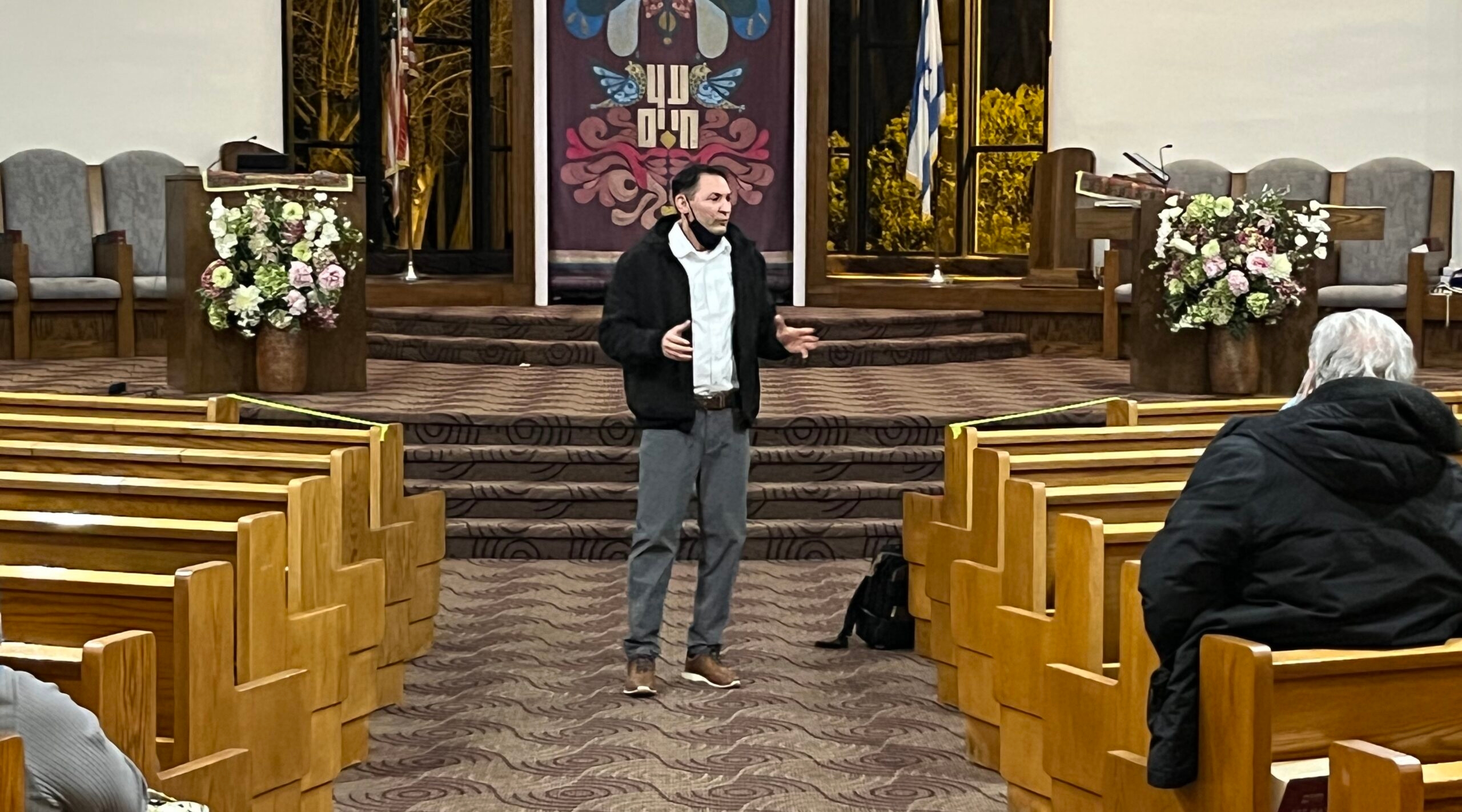 In 2021, more than 2,700 antisemitic incidents in the United States were reported to the Anti-Defamation League and its partners, according to the group’s annual report, 34% more than the ADL tallied in 2020 and the highest number since the organization started tracking such incidents in 1979.

The Community Security Initiative also monitors online threats, employing a threat intelligence analyst who scours both mainstream social media platforms, such as Facebook, Twitter and Instagram, as well as darker corners of the internet.

The analyst looks for postings that may merit alerting law enforcement about a possible threat — for example, if there appears to be a clear and present threat or if a specific institution is named. The public can also play an important role by reporting antisemitic posts to the Community Security Initiative.

During an in-person training at The Community Synagogue in Sands Point, New York, Filiby showed staff safe places to hide and provided tips such as closing the blinds during an attack, recalled Jeff Rembrandt, the Reform congregation’s executive director.

“Most shooters are looking for easy targets,” said Rembrandt, who has participated in several trainings. “They are not shooting into rooms where they don’t know what is going on. So close the window blinds, lock the door, and you make it a hard target.”

At Kehillath Shalom Synagogue, a Reconstructionist congregation in the woods of Huntington, New York, participants of a training course asked Filiby whether they should run out the front or the back door during an attack, recalled Rabbi Lina Zerbarini.

Filiby said recent assailants have entered through the front door, but the guidance, of course, is to run in the opposite direction of the attack. He also emphasized the importance of routinely conducting drills, Zerbarini said.

Based on Filiby’s recommendation, the congregation placed shades on its front windows.