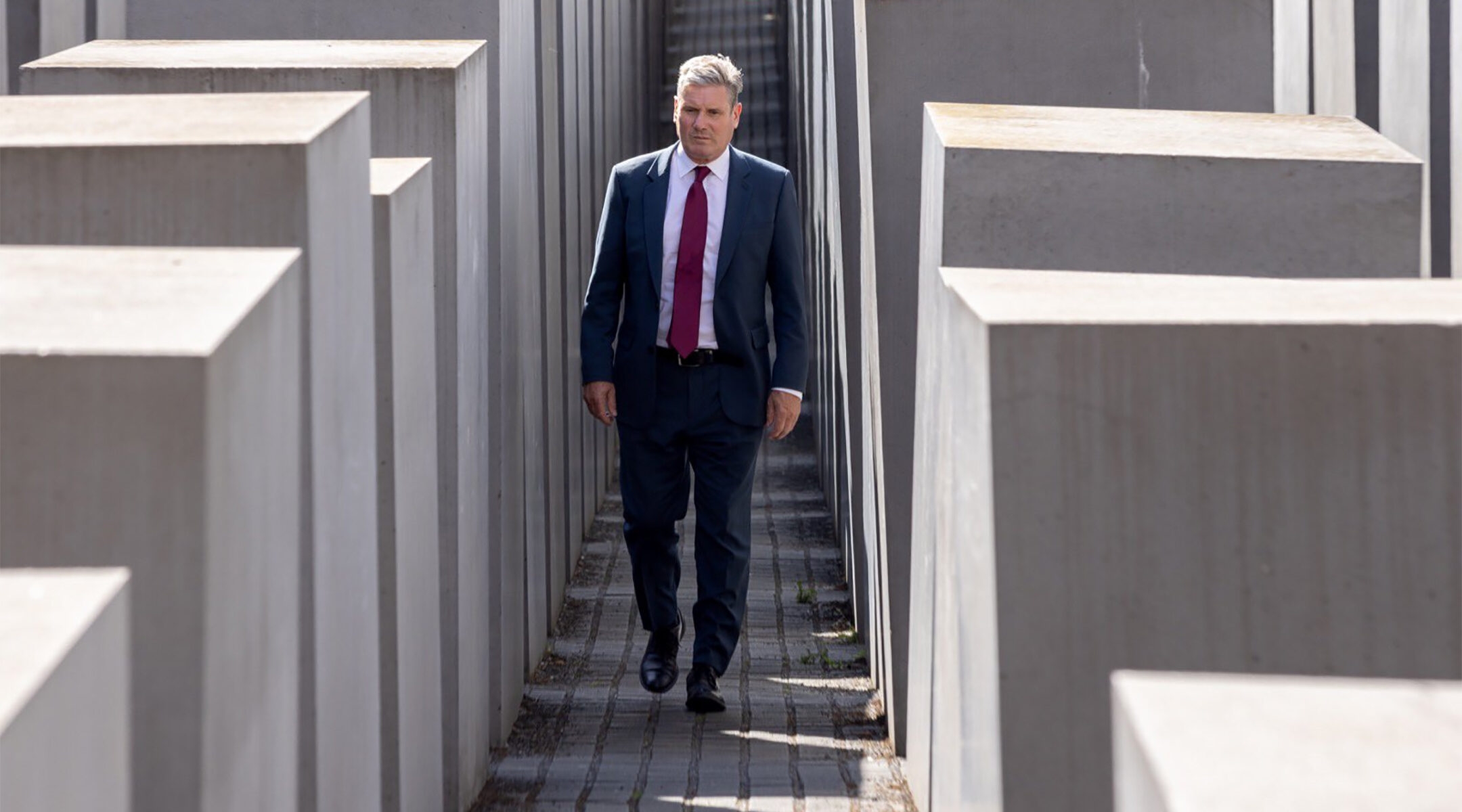 Keir Starmer, the head of Britain’s Labour Party, visits the the Memorial to the Murdered Jews of Europe in Berlin, Germany, July 15, 2022. (Courtesy of Starmer's office)
Advertisement

(JTA) — Keir Starmer, the head of Britain’s Labour Party, has come under fire for a political video that includes a shot of him walking inside Berlin’s famous Holocaust memorial.

The Memorial to the Murdered Jews of Europe, a striking maze of stone pillars that was dedicated in 2005, is typically off-limits for political displays. Even selfies taken there are frowned upon.

So when Starmer released a video Sunday about his recent trip to Germany that shows him walking through the memorial but does not mention Jews or the Holocaust, he quickly drew criticism from Jewish leaders in the United Kingdom and Germany.

“To incorporate the Memorial as the backdrop for a political clip that does not even mention the Holocaust is an insult,” Joe Glasman of the Campaign Against Antisemitism, a British-Jewish watchdog group, told the Jewish Chronicle of London.

“Keir Starmer made the Holocaust Memorial just a meaningless backdrop,” Sigmount Königsberg, the commissioner for antisemitism for the Berlin Jewish Community, told the Chronicle.

The incident is notable because Starmer vowed to remove what he called “the stain of antisemitism” on the Labour Party when he took over in 2020. The centrist replaced Jeremy Corbyn, a far-left politician who has been accused of stoking antisemitism within the party.

“Starmer should apologize and listen to the criticism that people in the Jewish community are making if Labour wants to make good on his promise to follow on from the Corbyn years in a positive way,” Nicholas Potter of the Amadeu Antonio Foundation, a Berlin-based watchdog on racism, told the Chronicle.

Two days before the video’s release, Starmer tweeted a photo of himself at the monument with the text: “We must always remember the millions of Jewish people who were murdered and persecuted because of who they were.”

A Labour spokesperson told the Chronicle that the site was included in the video precisely because of Starmer’s reaction to visiting it.

“Visiting the Memorial to Murdered Jews of Europe was a very moving experience for Keir Starmer which is why we wanted to include it in our record of his visit to Berlin,” the spokesperson said. “Keir also spoke to the media about the visit, the power of the Memorial and why we must never forget the Holocaust.”

Ruth Smeeth, a Jewish former Labour lawmaker and vocal critic of Corbyn, defended Starmer on Twitter, writing that he “has a proud record in fighting antisemitism. He visited the Holocaust memorial and spoke about it at the time. This attack is not only wrong, but completely disingenuous and deeply unfair. And attempts to politicize something that simply shouldn’t be.”

Also depicted in the political video were other destinations in Berlin that would be easily recognizable to a British tourist: the Brandenburg Gate, remnants of the Berlin Wall and the Bundestag, the seat of government. The portion in the Holocaust memorial lasts for 3 seconds of the 1:08 video.