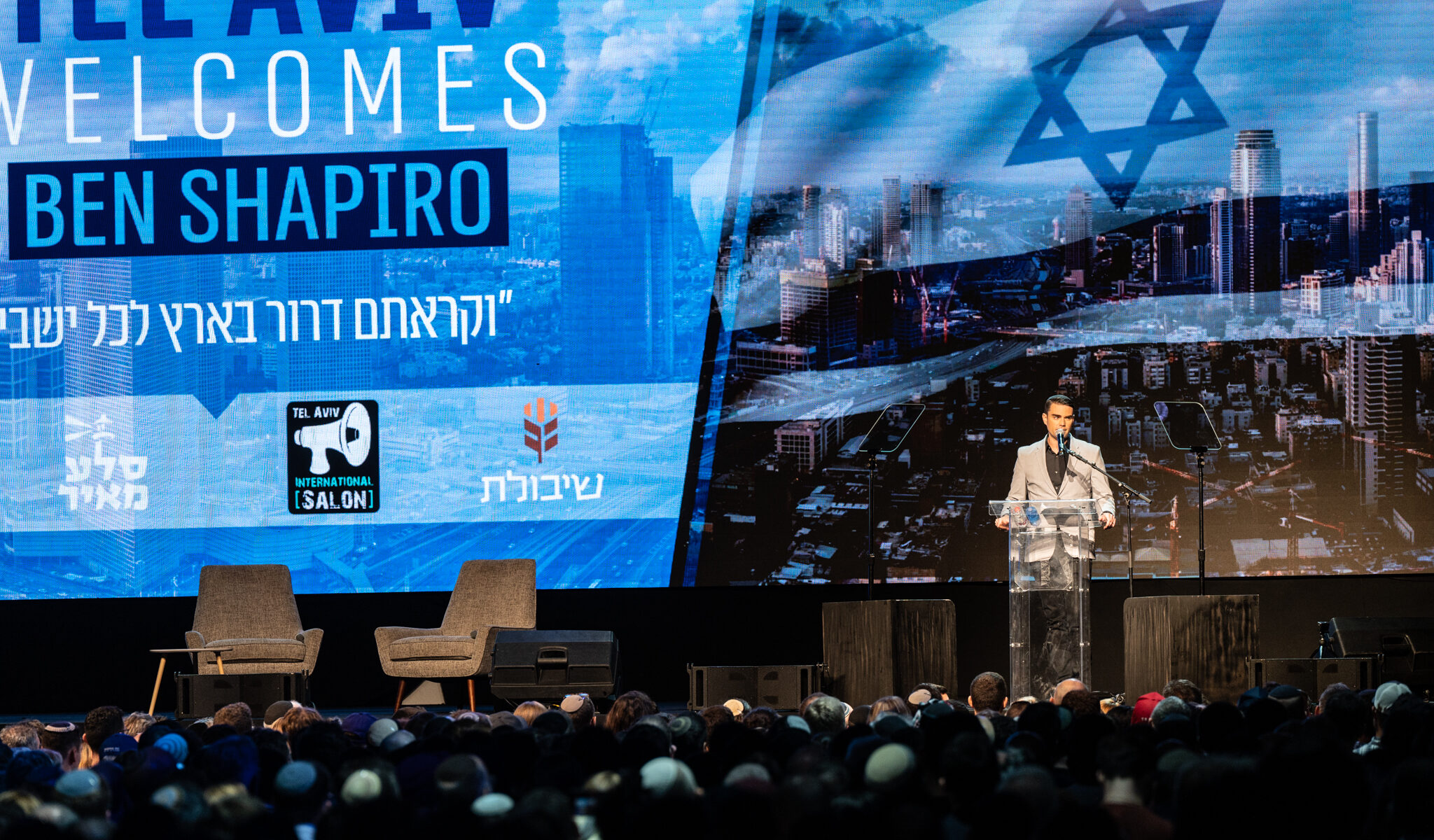 TEL AVIV (JTA) — While Israeli hip-hop sensation Hadag Nahash was rocking out the Tel Aviv Port in an outdoor concert Wednesday evening, across the road another celebrity sensation was met with roaring applause of a different kind: Conservative pundit and arguably the world’s most famous Orthodox Jew, Ben Shapiro, was in Tel Aviv.

“I may not agree with Shapiro’s views, but it’s a good thing he’s around to balance out the craziness in the U.S.,” said veteran Israeli columnist Ben Dror Yemini, who was among the 2,500 Israelis and expat Americans who came out to hear Shapiro on a hot July night. Yemini, who not unlike Shapiro has devoted himself to denouncing what he sees as liberal dominance of the media, said he was particularly worried about antisemitism on college campuses and what he said was anti-Israel reporting in The New York Times.

Shapiro, who through his podcast has become a standard-bearer for the American right, often defends Israel but had never previously spoken there. His talk — the keynote event for CPAC Israel, an Israeli version of the U.S. conservative conference — packed one of the biggest indoor venues in Tel Aviv, in a sign that American-style conservatism is finding a warm reception in a country where political debates between right and left have focused mainly on the Israeli-Palestinian conflict and on the role of religion in public life.

Israel, Shapiro told the Jewish Telegraphic Agency in an off-stage interview before he addressed the crowd, has shown itself to be vulnerable to “woke culture,” but added that he hoped that it would reject it.

“It’s a terrible export from the United States,” he said, adding that the tide is now turning and that America is facing a correction after the left “pushed too far too fast.”

In his address, which was jointly organized by CPAC, Tel Aviv International Salon and Sella Meir Shibolet Press, an Israeli publishing house focusing on conservative writing, Shapiro told the audience that Israel should take inspiration from other aspects of the United States, by lowering taxes and regulation, removing judiciary influence over the government and removing unions from the public sector.

Israel’s success in its 74 years of existence was due to its social capital, he said, and not due to its economic system which is “kind of a dumpster fire.”

“This is the first thing that Israel can learn from America. Free market economics is a very, very good thing,” he said, to loud cheers.

“America’s dynamism is the result of the tax structure that benefits investment; precisely the reverse is true in Israel,” he said, citing large gaps between the two countries’ respective tax burdens.

“There’s a reason people from Israel, in Israel, choose to do business in the U.S. And that needs to stop,” Shapiro said.

Interviewed in English by leading Israeli political reporter and fellow kippah-wearer Amit Segal, Shapiro said Israel was plagued by a problem that, until they recently gained a majority, galled U.S. conservatives: the “unelected bureaucracy” of the judiciary.

The Israeli Supreme Court’s power in striking down legal acts of the Knesset means that an “unelected, unaccountable set of oligarchs [are] in charge of national policies in the name of a non-existent constitution,” Shapiro said. Israel’s top court has recently ruled that the country must certify conversions performed abroad and accept online civil marriages, positions not held by the country’s religious leadership.

In Israel, Shapiro said, the problem is compounded by the fact that the Knesset, Israel’s parliament, gave power to the Supreme Court in the first place, and also that the court selects its own successors. “This is totally insane.”

Also “insane,” according to Shapiro: that a governing coalition could not be formed when 80 of the Knesset’s 120 seats were center or right of center, well surpassing the requirement for a 61-seat majority.

Shapiro predicted an end to political gridlock in the next election, set for November. “I think Bibi will win,” he told JTA, referring to longtime prime minister and current opposition leader Benjamin Netanyahu.

“This coalition has proved to enough Israelis that opposition to Bibi is not an agenda,” Shapiro said. “They couldn’t even do basic things.”

While he may be a “cutthroat politician,” Netanyahu is the “most important prime minister the state of Israel has ever had with the possible exceptions of [David] Ben Gurion and [Menachem] Begin,” he said.

“That earns him the ability and the right to choose when he wants to leave,” he added.

Summing up his thoughts in a true-to-form tongue twister, Shapiro said: “The bitching that has replaced the strategy to actually replace [Netanyahu] is not actually a strategy to replace him.”

For many Israelis, even those well ensconced in the political right, some of Shapiro’s views are extreme. Take his unequivocal stance on the U.S. Supreme Court decision to strike down Roe vs. Wade, which had ensured abortion rights to Americans. Israel recently reformed access to abortion with nary a peep from the far-right — even from its firebrand elements — and many rabbis from mainstream Orthodoxy have said that abortion in certain cases is not only justified, but mandated.

Asked how he squares his opposition to abortion rights with Jewish law, or halacha, Shapiro began with the disclaimer that Jewish law should never represent public policy in the United States.

“That said, there is no position in halacha that suggests that ‘a woman’s right to bodily autonomy’ is a rationale for abortion,” he told JTA. “Halacha is significantly more pro-life than what is made out to be in the media.”

“On a moral level I would love to see a constitutional amendment protecting the right to life,” he said, adding that because such an amendment would be unlikely to garner enough support to pass, it should not even be considered.

Shapiro, who is often mocked or hated on for his rhetoric — leading some detractors to muse that he might be purposefully inflammatory — admitted that there are “many times where I say things that just pop out,” but maintained that his messages were “not uniquely vitriolic.”

He said he regretted many of his past tweets, including one that claimed “Arabs like to bomb crap and live in open sewage,” which he said was “idiotic” to write.

He had no regrets, however, for making derogatory remarks about Jewish Democrats.

“If you’re a Jew and your value system supports gay marriage and abortion above religious freedom and the security of the state of Israel then your identity as a Jew is not the core of your identity,” he said.

He denounced mainstream American Jewry for its use of the Hebrew term tikkun olam — loosely translated to mean “repairing the world” — saying, “The phrase tikkun olam has come to mean a bunch of social justice policies that literally have nothing to do with Judaism.”

Addressing President Joe Biden’s visit to the region last week, Shapiro said it “went pretty much as his presidency and every day goes for him. He gets out of bed, he takes a couple of steps, those go okay and then he falls directly on his face.”

Biden, according to Shapiro, made some “nice Zionistic sounds,” citing the American president’s interview on Israeli television in which he said he “told his progressive base that they were wrong” about Israel being an apartheid state, as well getting down on his knee to speak to Holocaust survivors during a visit to the Yad Vashem Holocaust Memorial in Jerusalem.

“When Biden does the occasional right thing, I’ll praise him for it,” said Shapiro.

But after that, he said, the trip went downhill, beginning with Biden’s decision to remove the Israeli flag from his limousine while visiting East Jerusalem and continuing with his “asinine comparison” between the plight of Irish living under the rule of the United Kingdom and the Palestinians today.

Asked later on stage by Segal if he would ever flee the U.S., Shapiro said Israel’s existence was the “single greatest guarantor of my loyalty to the United States.”

The United States is a “more welcoming place for me because Israel is there as a backstop in case anything should go wrong,” he said.

Segal pressed Shapiro: “I feel you tried to dodge the question, so I’ll ask it more bluntly: Why won’t you make aliyah to the State of Israel?”