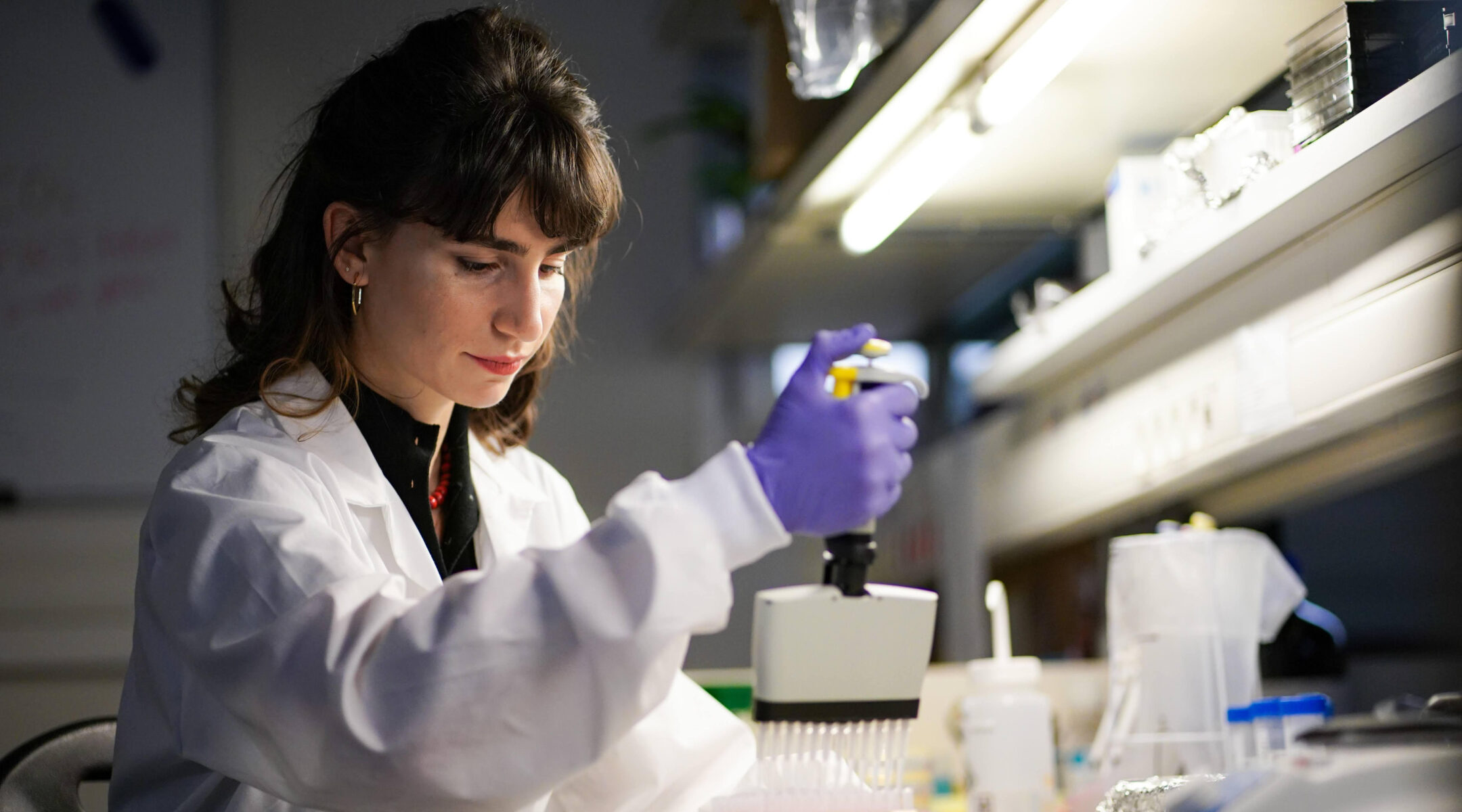 Tamar Koren, an MD/PhD candidate at the Technion, is researching how patients' mental states may cause or exacerbate illness. Koren's work is part of the Technion Human Health Initiative. (Nitzan Zohar/Technion)
Advertisement

If thinking you’re sick can make you feel sick, is there a way to train your brain — and your body — to reverse that process and restore you to health?

That’s the central question that Tamar Koren, an MD-PhD candidate at the Technion–Israel Institute of Technology in Haifa focused on psychosomatic illness, is researching.

Professor Shai Shen-Orr, head of the school’s Systems Immunology & Precision Medicine Laboratory, is mapping how the immune system ages as people age — to the point of being able to calculate the age of someone’s immune system based on cellular data.

Professor Ron Kimmel, founder of the Geometric Image Processing Lab in the Technion’s Henry and Marilyn Taub Faculty of Computer Science, is using artificial intelligence and machine learning to train computers to analyze biopsy images of human tissue in order to determine not only whether a tissue is cancerous, but also what type of mutation it is and how much it has metastasized.

All three projects are examples of the kind of research being cultivated under the Technion’s new Human Health Initiative (THHI) — a recently announced effort to bring together teaching hospitals, different Technion departments and commercial companies to focus on solving specific health-related challenges.

“This initiative addresses world challenges that require multidisciplinary solutions,” said Shen-Orr, who is also the cofounder of CytoReason, a pharmaceutical artificial intelligence company. “We’re moving from research based on departments and faculties to being goal oriented. In addressing problems of human health, it doesn’t matter where people sit. They need to work together.”

The THHI is focused on six areas: staff and student engagement, new undergraduate and graduate educational programs, recruitment of top-notch researchers, funding, shared office and lab space for “essential meeting of minds,” and acquisition of cutting-edge lab equipment and other research infrastructure.

The new initiative dovetails with other Technion projects with outside partners, such as the university’s Bridge to Next-Generation Medicine program with Cincinnati Children’s Medical Center. That project aims to revolutionize pediatric medicine by combining the Technion’s technological prowess, including world-renowned expertise in computational science and artificial intelligence, with doctors and scientists focused on understanding and treating childhood diseases.

“The Technion believes that the time is ripe for taking the next quantum leap: addressing human health in a comprehensive, institute-wide manner,” Technion President Uri Sivan said. “The THHI represents a major intellectual and cultural undertaking in this direction. No other university in the country, and only a handful around the world, are positioned so well to take this leap.”

The idea behind the THHI is to pull people out of their comfort zones and create collaborations across units and disciplines.

“Rather than telling our investigators what they should be doing, the best way is bringing them together, and the magic is guaranteed to happen,” said Noam Ziv, who is spearheading the THHI project.

Ziv said the Technion’s prime advantage is that it’s one of the world’s few technical universities that also has a medical school.

“I don’t think you have to convince anybody that human health is a huge challenge,” Ziv said. “Our population is expanding, average age is increasing and the number of challenges associated with human health seems to be growing all the time. The coronavirus is a prime example of how things that affect one part of the world quickly affect other parts.”

During the height of the pandemic, for instance, Technion data scientists raced to improve the efficiency of PCR tests using algorithms. Biologists worked to create rapid testing kits that wouldn’t need sophisticated machines to yield quick results. Still others aimed to devised a sticker, which when placed on a mask, neutralizes viruses on contact.

To prove their hypothesis about psychosomatic illness, Koren and her team induced colitis in lab mice and waited for them to recover. Researchers then artificially stimulated the neurons in the brain that had become active during the bout of colitis. Inflammation re-emerged in the exact same location even though there was no infection. Likewise, suppressing memory neurons reduced the inflammation in mice who were sick with colitis.

“If, for example, you receive a text message from your friend that he has COVID and you just saw him last night, you immediately start to envision that you’re also sick. And you start to manifest physical presentations of a very similar disease: your throat itches, you start coughing, you feel weaker,” Koren said. “Studies have shown that stress or emotional triggers can initiate disease, or sometimes exacerbate a disease that’s already been diagnosed.”

Koren’s research represents a joint effort among neurosurgeons, neurologists and immunologists — the kind of collaboration THHI seeks to cultivate and which is different from traditional approaches to research.

“These kinds of collaborations have already started to develop,” Koren said. “The fact that it’s both basic science and clinical research is a novelty.”

Eventually, Koren said, her team’s work could lead to a variety of new therapies for diseases that currently have no cure, in the form of magnetic stimulation or other non-invasive therapies for patients with rheumatic arthritis, lupus, multiple sclerosis and other disorders.

“What we’re suggesting is not drugs, which also have adverse effects,” she said, “but regulation of brain activity that can alleviate their symptoms and improve their quality of life.”