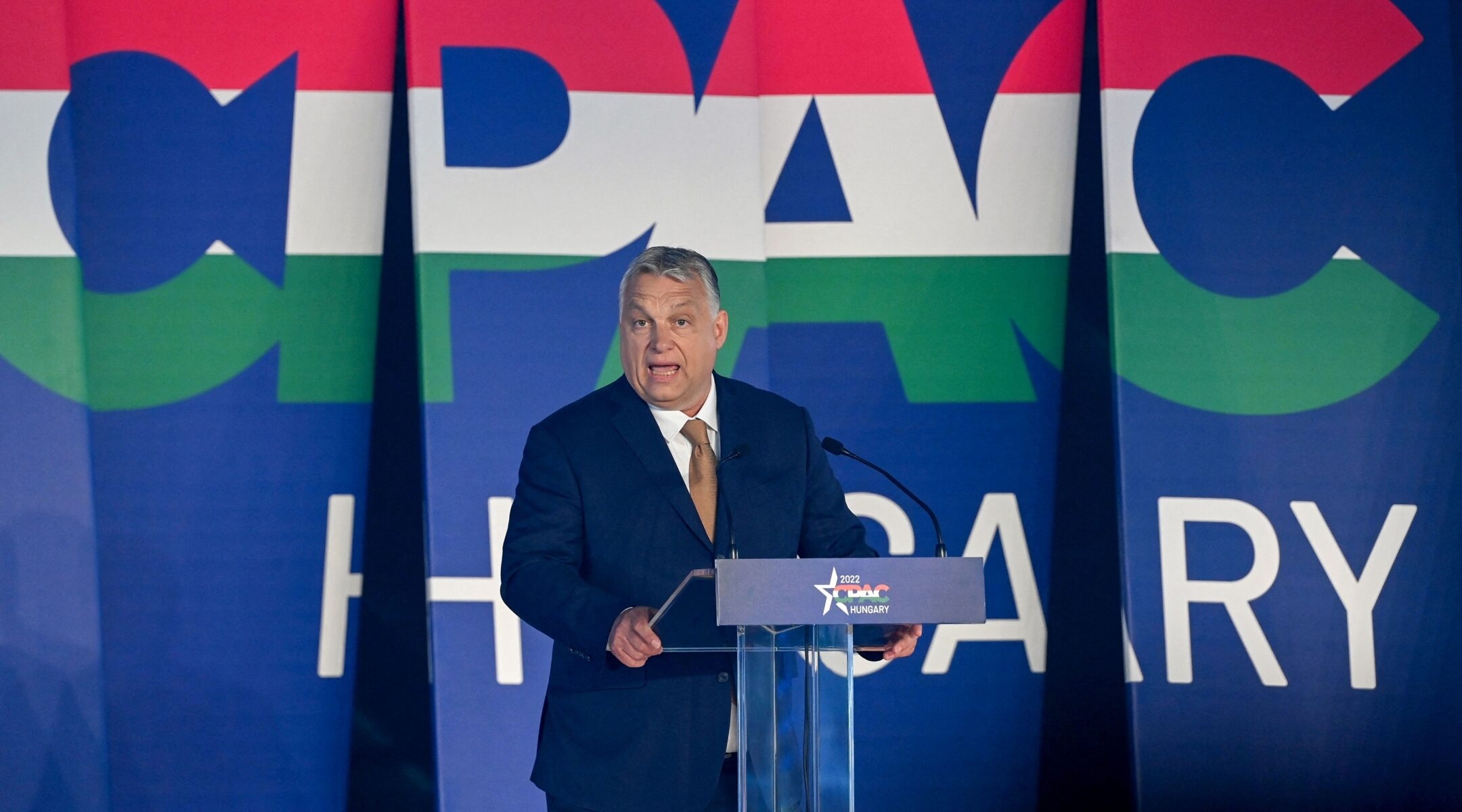 (JTA) — Hungary’s top rabbis have added their voice to a torrent of criticism about a speech by Prime Minister Viktor Orban in which he said that Hungarians “do not want to become peoples of mixed races.”

Orban, whose far-right rhetoric has long galvanized his base and millions abroad while angering many others, made the remark Saturday during a speech in Romania decrying the arrival to Europe of millions of Muslims.

Orban’s remark prompted an advisor, Zsuzsa Hegedus, to resign. In a letter announcing her resignation, Hegedus, who is Jewish, called the speech “a pure Nazi diatribe worthy of Joseph Goebbels,” the Nazi propaganda chief.

Rabbi Robert Frölich, the chief rabbi of the Mazsihisz umbrella group of Hungarian Jewish communities, told the Jewish Telegraphic Agency that Orban’s remark was “a violation of human dignity and morals.” Slomó Köves, the head of the EMIH Orthodox umbrella of Jewish communities in Hungary, called Orban’s choice of words “unfortunate,” suggesting it was not compatible with “Judeo-Christian values.”

The rabbis’ criticism is notable because they typically refrain from criticizing the prime minister, even when others do so.

Deborah Lipstadt, the U.S. State Department’s antisemitism monitor, also condemned Orban’s speech. “Deeply alarmed by the Hungarian prime minister’s use of rhetoric that clearly evokes Nazi racial ideology,” she tweeted, saying that the rhetoric was especially inexcusable for “one who claims zero tolerance of antisemitism.”

In a part of the speech pertaining to the peoples of the Carpathian region, Orban said: “We are willing to mix with each other, but we don’t want to become a mixed race.” He characterized Muslims moving to Hungary as a “flood” being forced upon the country, in rhetoric that echoes “replacement theory,” the racist sentiment animating many white supremacists.

Orban is scheduled to speak next week at CPAC, the conservative political conference in the United States; in May, he hosted a CPAC convening in Hungary where a Hungarian writer known for antisemitic remarks was a featured speaker. CPAC organizers said Orban’s speech would go on as planned despite the backlash.

Focusing on the issue of race in speeches is unusual for Orban, but he has made multiple statements that critics said were racist and antisemitic. In 2018, he used during a speech terms that critics said echoed Nazi propaganda against Jews.

“We are fighting an enemy that is different from us. Not open, but hiding; not straightforward but crafty; not honest but base; not national but international; does not believe in working but speculates with money; does not have its own homeland but feels it owns the whole world,” he said at the time, in remarks reported by The Guardian.

On Thursday, Orban made a rare concession to his critics when he offered a clarification about his comments.

“It happens that I speak in ambiguous terms,” he said during a press conference in Vienna, according to the Index news site.  “We are proud of what Hungary has achieved in the fight against racism,” he added. The speech in Romania “is not about racism, it’s about cultural differences.”

In a letter to Hegedus, his former adviser, Orban wrote: “You can’t be serious about accusing me of racism after 20 years of working together. You know that, according to my understanding, God created all people in his own image. Therefore, in the case of people like me, racism is excluded from the get-go.”

In his statement about Orban’s speech, Köves, the Orthodox rabbi, said any discussion of race at all is “unfortunate” even as it may be appropriate to lament “the loss of space in Western Judeo-Christian culture.” (“Judeo-Christian” is a term popularized in the mid-20th century to signify religious unity but which has more recently become a catchphrase for conservatives.)

“As I understand it, a significant part of the speech was about the loss of space in Western Judeo-Christian culture and the challenges that this poses,” Köves said. But, he added, “one of the fundamental values of Judeo-Christian civilization is that God created every human being in his own image. For this reason alone, it is particularly unfortunate to speak of races.”