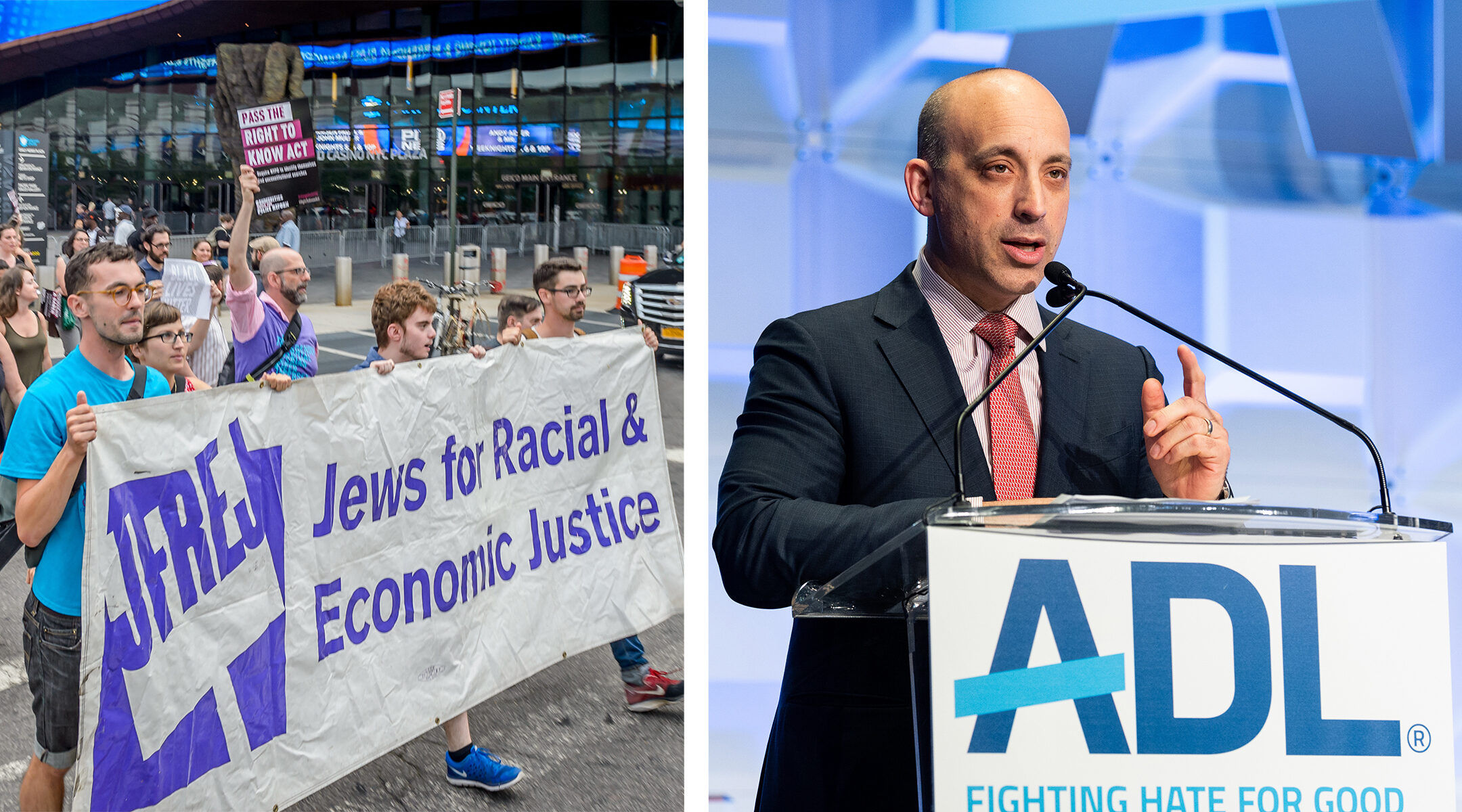 Brian Robinson, a Jewish businessman who is one of 17 Democrats vying to represent New York’s newly drawn District 10, put up a 16-post-long Twitter thread that called Jews for Racial & Economic Justice and its political arm, the Jewish Vote, a “far-left scam.”

“We need to have an honest conversation about JFREJ,” Robinson began, with a tweet that reached his 4,500 followers.

“We have allowed this pro-dystopian organization to LARP on behalf of the mainstream Jewish community for far too long,” Robinson went on, using a term referring to role-playing. “During primary time, JFREJ suddenly pretends to be liberal and pro-Jewish when they are consistently against both mainstream Jewish values and interests.”

The following day, the ADL’s CEO, Jonathan Greenblatt — who has close to 350,000 followers on Twitter — retweeted Robinson’s thread, leading many who saw it to wonder whether Greenblatt was endorsing what Robinson had said.

1. We have allowed this pro-dystopian organization to LARP on behalf of the mainstream Jewish community for far too long. During primary time, JFREJ suddenly pretends to be liberal and pro-Jewish when they are consistently against both mainstream Jewish values and interests. pic.twitter.com/GQnixkhQMK

The answer was yes — but not every word.

Greenblatt’s retweet, which was of the first message only, reflected “agreement with the larger view that a group calling itself The Jewish Vote isn’t representative in any way of the majority of the Jewish community,” an ADL spokesperson confirmed to the New York Jewish Week on Friday.

“We need to have an honest conversation about JFREJ, their support for BDS, and how out of touch they are with the majority of the Jewish community,” the spokesperson said.

But, the spokesperson added, “It was not meant to imply agreement with all aspects of the thread and, to be clear, we reject any attacks on the Jewish identity of people we have disagreements with.”

The ADL has traditionally monitored and responded to antisemitism and hate speech. Greenblatt’s retweet and the ADL’s statement is in line with the ADL leader’s recent speech equating anti-Zionism with antisemitism.

JFREJ’s communications director, Sophie Ellman-Golan, noted that the ADL’s statement was inaccurate because JFREJ does not have a position on BDS, the movement to boycott Israel.

She said Greenblatt had appeared to condone criticism impugning JFREJ’s members as not really Jewish — and that his decision to do so had consequences for the group’s members.

“The ADL is a bigger organization than JFREJ,” Ellman-Golan said. “There’s power in that. It’s all nice and well to say in a statement that you reject attacks on Jewish identity, but instead they have used the ADL to legitimize attacks on us.”

Publicly, the group responded to the thread in a light-hearted manner, with a cat picture and a sunny statement whose audience was implied.

“At JFREJ, we affirm that all Jews … are Jewish! We draw meaning & power from a plurality of relationships to Judaism. Most of us find the juiciest inspiration at intersections of a few: historical, cultural, religious, political, familial,” the group tweeted. “It’s nice! More people should try it.”

But privately, members and other critics of the retweet were facing harsh personal attacks. After critiquing Greenblatt’s retweet this week, Harry Reis, the former policy director of the New Israel Fund who previously worked as Greenblatt’s special assistant at the ADL, was publicly called a member of “the Judenrat left” as well as a “kapo” on Twitter, referring to Jews who collaborated with Nazis during World War II.

Another member who asked for anonymity because of harassment said she locked her account after receiving threatening messages that called her a “self-hating kapo.”

“I think there’s an effort overall to say who are the real Jews and who are the not real Jews, that the only people who count are the people who agree with us,” Ellman-Golan said. “That’s really distressing and sad.”

In some ways, JFREJ’s outlook does map to that of the broader Jewish community, including in New York City. According to a survey from the Jewish Electorate Institute, a non-partisan think tank dedicated to understanding American Jewry, 70% of American Jewish voters lean Democratic and favor issues such as climate change, voting rights, jobs and health care — all issues that are part of JFREJ’s activism.

On Israel, multiple recent surveys have found that younger U.S. Jews are less emotionally attached to Israel than older ones and that Jews overall increasingly agree with harsh criticism of Israel.

The Jewish Vote, which JFREJ launched in 2018 to get involved directly in electoral politics, endorses progressive candidates in New York. It has backed City Comptroller Brad Lander, who is Jewish, and former mayoral candidate Maya Wiley. In the current District 10 congressional race, the Jewish Vote endorsed Yuh-Line Niou, a progressive who has supported the BDS movement throughout her campaign.

Polls show Robinson, the candidate who kicked off the kerfuffle, garnering 1% of the District 10 vote. On Wednesday, he picked up an endorsement from the Orthodox Jewish firebrand Heshy Tischler, a Republican. The primary is Aug. 23.