Survey: A quarter of US Jews agree that Israel ‘is an apartheid state’ 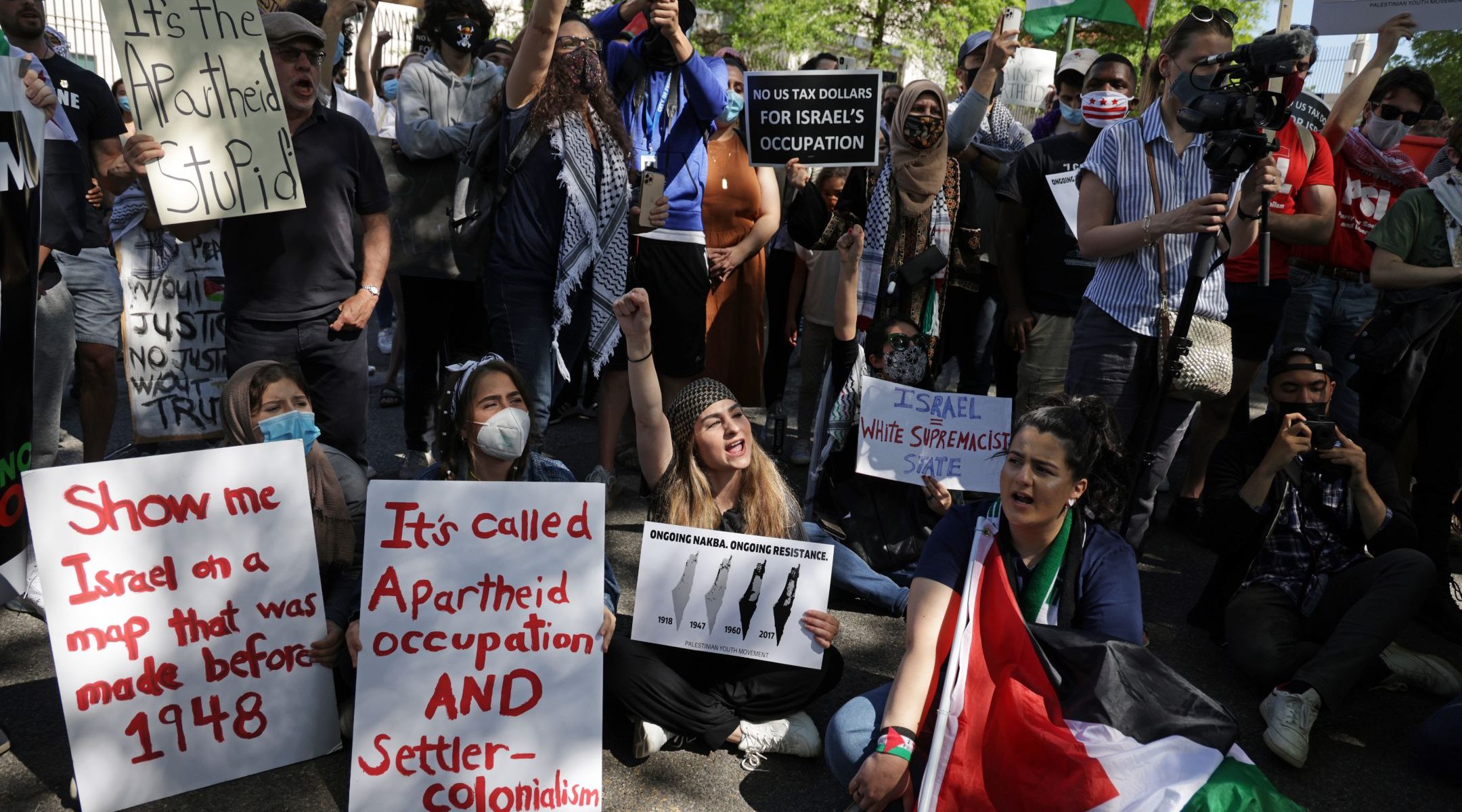 Activists protest Israel’s military actions against Palestinians outside the Israeli Embassy in Washington, DC. on May 18, 2021. (Alex Wong/Getty Images)
Advertisement

(JTA) — A survey of U.S. Jewish voters taken after the Israel-Gaza conflict finds that a sizable minority believe some of the harshest criticisms of Israel, including that it is committing genocide and apartheid.

Among younger voters included in the survey released Tuesday, agreement with those statements was higher, though still in the minority. The poll found that 9% of voters agreed with the statement, “Israel doesn’t have a right to exist.” But among voters under 40, that proportion was 20%. A third of younger voters agreed that Israel is committing genocide, a position that even human rights lawyers who are critical of Israel say is extreme; more than a third agreed that Israel is an apartheid state.

The findings are striking as mainstream pro-Israel organizations struggle to make the case that Israel is central to Jewish identity and that criticism of it often veers into antisemitism. They suggest that many American Jews agree with statements by some of Israel’s harshest critics on the left made during the Gaza-Israel conflict in May, including in some cases by a handful of Democratic members of Congress who were then criticized by their colleagues.

The survey of American Jewish political sentiment was wide-ranging, finding wide approval for President Joe Biden and deep concern about Republican efforts in Georgia and Florida to tighten access to the ballot booth. When it came to measuring criticism of Israel, the poll first asked respondents whether they thought each of the four critical statements was antisemitic; those who said a statement was not antisemitic were then asked if they agreed with it.

Of the four statements, only in one case, did a majority — 67% — agree that it was antisemitic to say, “Israel doesn’t have a right to exist.” For the other three questions, more respondents disagreed that the statement was antisemitic than agreed.

While the proportion of respondents agreeing with critical statements about Israel was higher than many pro-Israel advocates have characterized, at least one finding is in line with that of another recent survey. Asked if they felt emotionally attached to Israel, 62% of respondents to the Jewish Electorate Institute survey said they did and 38% said they did not, numbers that matched those in the Pew study of 4,700 American Jews released in May.

The new survey presents the latest challenge as the new Israeli government endeavors to repair ties with a U.S. Jewish community that to a degree became alienated from Israel during the 12 years Benjamin Netanyahu was prime minister. Surveys have found that Israeli and American Jews know little about one another.

One statement in the survey, echoing a claim by former President Donald Trump, that “Jews who vote Democratic are disloyal to Israel” was also put forward to respondents to assess whether it is antisemitic; mainstream Jewish organizations have suggested that it is. However, while a vast majority of respondents, 77%, disagreed with the statement, only 26% said they believed it is antisemitic.

Asked about the two-state solution, 61% of survey respondents said it was their preferred outcome. But 19% said they preferred annexation of the West Bank that would deny Palestinians the right to vote in national elections, while 20% said they preferred “establishing one state that is neither Jewish nor Palestinian” and encompassing Israel, the West Bank and Gaza. Gaza is currently controlled by the Hamas terrorist group.

The Democratic lawmakers who lashed out at Israel during the conflict, including Reps. Cori Bush, Ilhan Omar and Rashida Tlaib, have also raised the prospect of cutting aid to Israel. While a substantial majority of survey respondents, 71%, said it was “important” to provide financial assistance to Israel, a smaller majority, 58%, said it would be appropriate to restrict aid to Israel so it could not spend U.S. money on settlements. A majority, 62%, support Biden’s reversal of Trump’s policy of cutting off aid to the Palestinians.

The survey showed continued support among Jewish voters for Biden and for Democrats, commensurate with an American Jewish Committee poll taken just before the Gaza conflict. In the latest poll, Biden earned 80% job approval, and 74% approval on how he is “handling relations with Israel.” He got 62% approval ratings for how he handled the recent Israel-Gaza conflict.

Asked whether they would prefer a Democrat to a Republican in a vote for Congress in next year’s midterm elections, 68% favored a generic Democrat and 21% favored a Republican.

On domestic issues, respondents placed high climate change, voting rights, jobs, and the economy, and the coronavirus pandemic. Strikingly, 83% of respondents said they were concerned about Republican efforts in Georgia and Florida to tighten access to the ballot booth, which Democrats say are aimed at inhibiting minority voters. Some 76% of respondents backed federal legislation backed by Democrats that would block the state efforts to restrict voting rights, and 62% supported eliminating the Senate filibuster to allow the Democratic majority to pass the legislation.