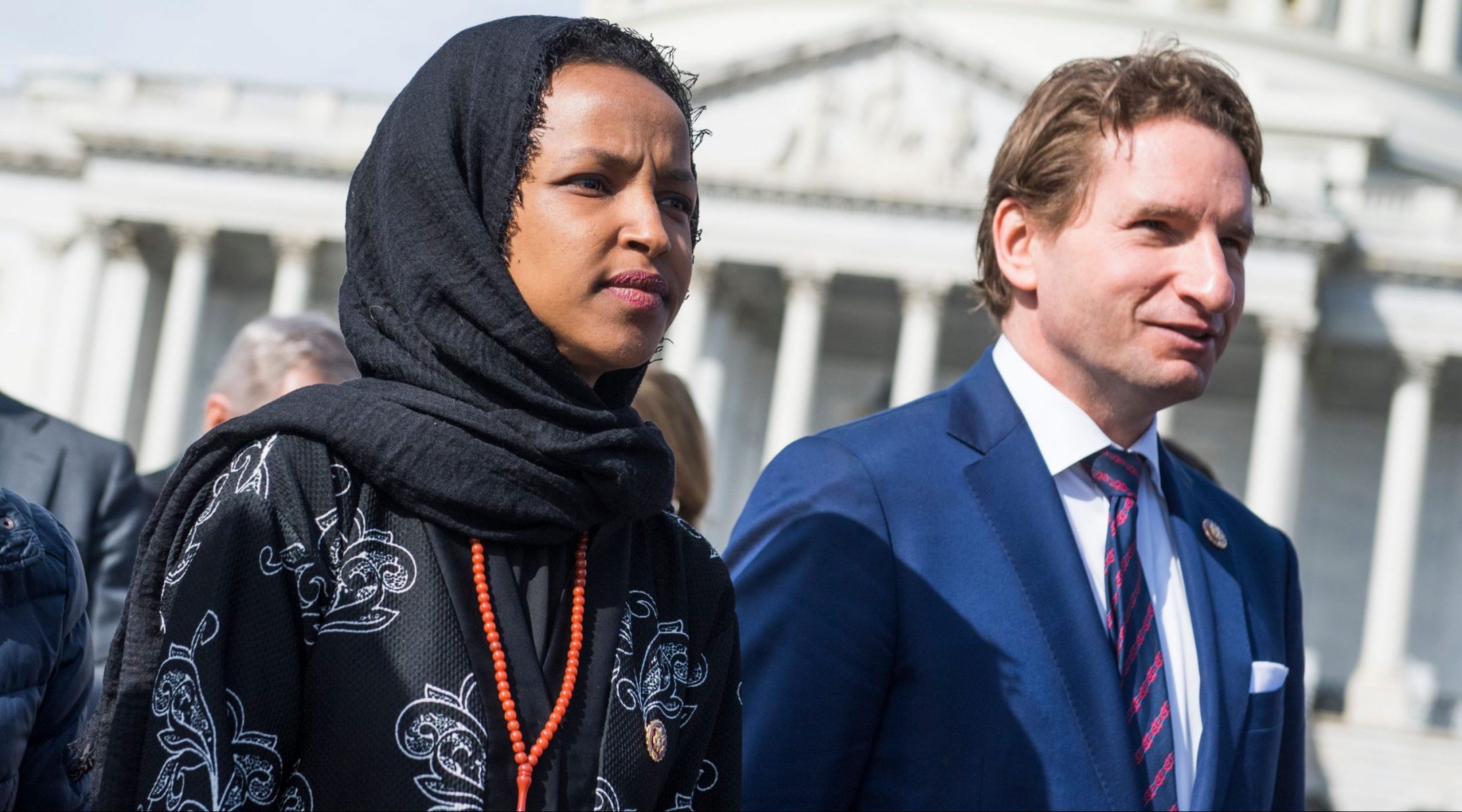 Rep. Dean Phillips was among the Jewish Democrats who called out Rep. Ilhan Omar, a fellow Minnesotan, without using her name. (Tom Williams/CQ Roll Call)
Advertisement

WASHINGTON (JTA) — Four Jewish House Democrats have called out party colleagues who accused Israel of apartheid and terrorism, as well as a Republican who has likened coronavirus restrictions to the Holocaust.

Their rebuke was part of a letter condemning the rising antisemitism sparked by the Israel-Hamas war earlier this month — the latest plea to President Joe Biden to make a priority of tackling the phenomenon.

One congressman who signed the letter, Dean Phillips of Minnesota, was chastising a fellow Democrat, Ilhan Omar, in a neighboring district, though Phillips did not use her name.

Along with Phillips, the other signers are Reps. Josh Gottheimer of New Jersey, Elaine Luria of Virginia and Kathy Manning of North Carolina. They do not name their targets but include direct quotes of their controversial comments.

“These include repeated, unacceptable, and blatantly antisemitic statements made by a Member of Congress comparing facemasks and other COVID-19 public health measures to ‘what happened in Nazi Germany’ during the Holocaust,” the letter said, referring to Rep. Marjorie Taylor Greene, R-Ga., who has drawn condemnations from leaders of her own party for her remarks.

“We also reject comments from Members of Congress accusing Israel of being an ‘apartheid state’ and committing ‘act[s]’ of terrorism,” the letter said. “These statements are antisemitic at their core and contribute to a climate that is hostile to many Jews. We must never forget that less than eighty years ago, within the lifetime of our parents and grandparents, six million people were murdered by the Nazis in the Holocaust because they were Jews. Israel has long provided the Jewish people with a homeland in which they can be safe after facing centuries of persecution.”

Omar and Reps. Rashida Tlaib of Michigan and Alexandria Ocasio-Cortez of New York have accused Israel of apartheid, and Omar has said “Israeli airstrikes killing civilians in Gaza is an act of terrorism.”

Phillips’ district covers the suburbs of Minneapolis; Omar’s includes part of Minneapolis. Phillips has criticized Omar in the past for her Israel statements, but has also defended her.

Omar’s spokesman said her terminology was merited, and accused the letter writers of conflating Israel with Jews.

“If we rightly condemn Hamas’s indiscriminate firing of rockets at civilian populations—which is a war crime—how can we ignore Israeli military bombs that terrorize the Palestinian population?” the spokesman said.

“Additionally, human rights organizations in Israel and around the world have released detailed reports concluding that the Israeli government is guilty of the crime of apartheid — as clearly defined under international law in the 2002 Rome Statute,” he said, referring to findings that Israel has criticized as baseless. “We are all horrified by the rise in antisemitic incidents. Equating legitimate, well-sourced criticism of Israeli actions with antisemitism conflates the activities of a government with an entire faith and does nothing to make Jews safer.”

There are 25 Jewish Democrats in the House. The letter comes as Republican leaders who have criticized Greene have lambasted Democratic leaders for sparing Omar, Tlaib and Ocasio-Cortez.