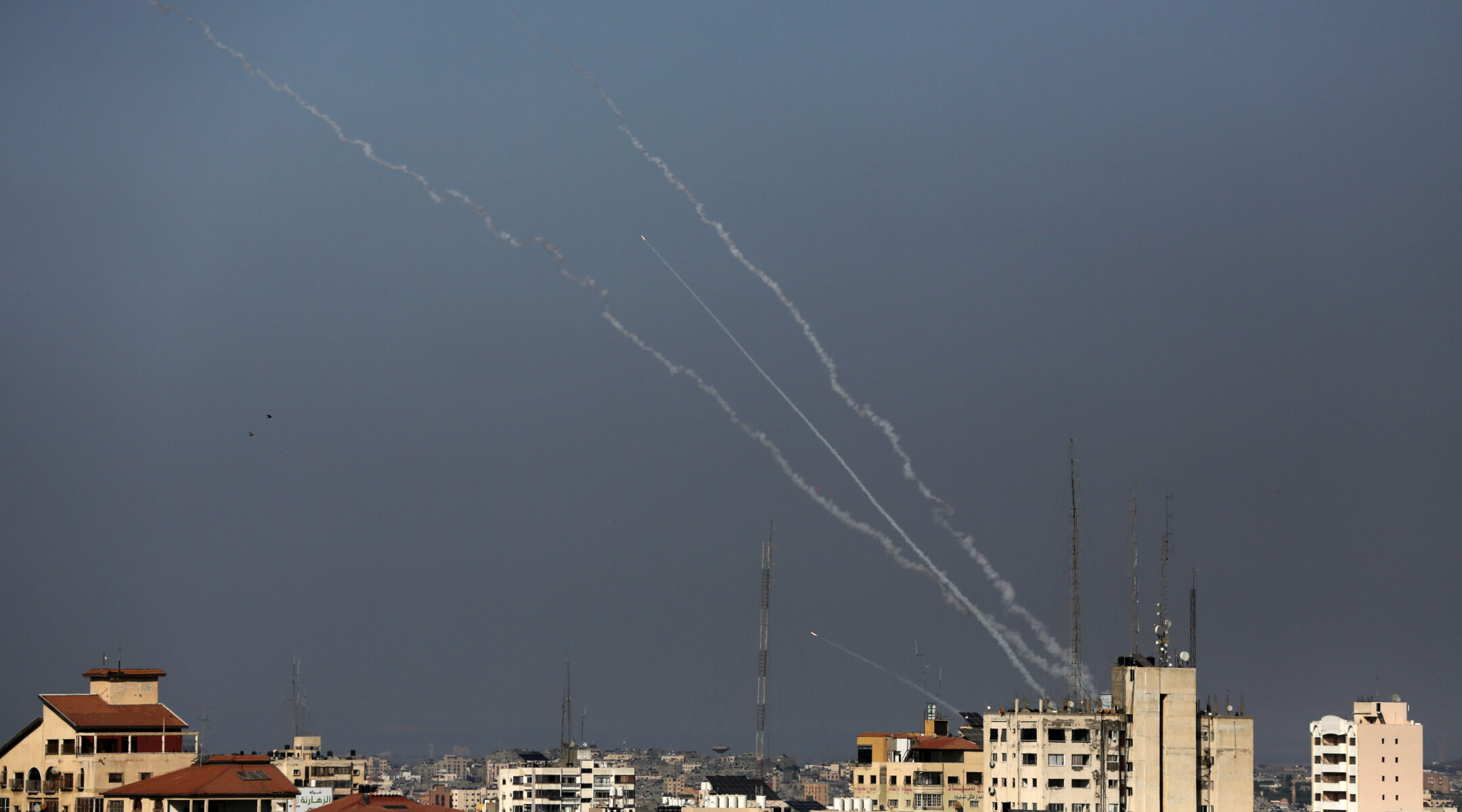 A salvo of rockets is fired from Gaza City towards Israel in the hours before a ceasefire between Israel and Palestinian Islamic Jihad, a militant group in Gaza, Aug. 7, 2022. (Majdi Fathi/NurPhoto via Getty Images)
Advertisement

(JTA) — After more than 48 hours in which hundreds of rockets were fired from Gaza toward targets in Israel, calm reigned again Sunday night after a ceasefire brokered by Egypt took effect.

Although a handful of rockets were fired shortly after the ceasefire start, 11:30 p.m. in Israel, the truce between Israel and Islamic Jihad appeared to be holding throughout the night.

The ceasefire marked a swift conclusion to a conflict that erupted early Friday when Israel that killed a senior commander of Palestinian Islamic Jihad, a group that promotes the military destruction of Israel and is regarded as a terrorist organization by the United States and the European Union.

Islamic Jihad leaders vowed to retaliate, and over the next two days, sirens blared frequently in Israeli towns near Gaza and occasionally farther afield in Tel Aviv and outside Jerusalem as nearly a thousand rockets were fired from Gaza. Israeli officials said the Iron Dome defense system intercepted 300 of them, with most of the rest that fell within Israel landing in open areas.

Meanwhile, Israeli armed forces continued to strike targets in Gaza and by Sunday, Israeli leaders said they had killed the entire leadership of Palestinian Islamic Jihad, preventing an offensive that they said the group had planned.

According to the Palestinian Ministry of Health in Gaza, at least 44 Palestinians were killed, including 11 children. Israeli officials said the children had died when Islamic Jihad missiles fell within Gaza.

Seeking to demonstrate its care in avoiding civilian casualties, the Israeli army released videos, some subtitled in English, showing pilots aborting missions when civilians were present. According to Israel’s Channel 12, the head of the country’s Shin Bet security service urged lawmakers Saturday night to end the operation, titled Breaking Dawn, before an “accident or mistake” complicated it.

U.S. President Joe Biden released a statement welcoming the ceasefire and calling for both humanitarian aid to Gaza and a “timely and thorough investigation” into reports of civilian deaths there.

“My support for Israel’s security is long-standing and unwavering — including its right to defend itself against attacks,” Biden said in the statement. “Over these recent days, Israel has defended its people from indiscriminate rocket attacks launched by the terrorist group Palestinian Islamic Jihad, and the United States is proud of our support for Israel’s Iron-Dome, which intercepted hundreds of rockets and saved countless lives. I commend Prime Minister Yair Lapid and his government’s steady leadership throughout the crisis.”

The campaign was the first overseen by Lapid, who is a month into a five-month caretaker government before scheduled elections. Lapid’s military credentials — he served only for the required minimum three years and worked primarily as a reporter for a military news organization — are seen as a weakness on his political resume.

This story has been updated to remove references to a story published elsewhere that was not accurate.