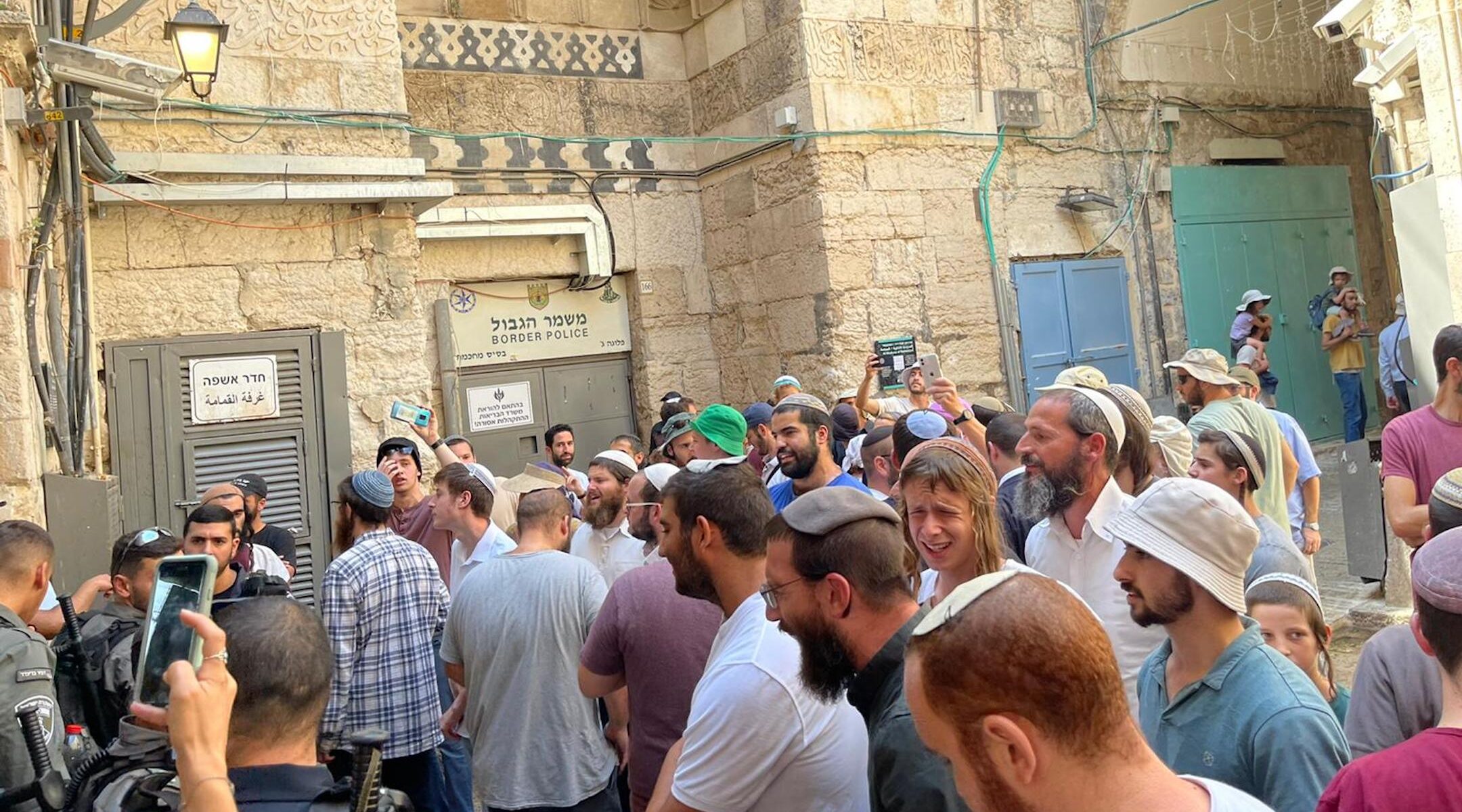 A group of Jewish men shouts the Shema prayer after leaving the Temple Mount, where prayer by non-Muslims is prohibited, Aug. 7, 2022. (Ron Kampeas)
Advertisement

But near the Temple Mount in Jerusalem’s Old City, other sounds prevailed: loud singing by Jewish men who ascended to it in honor of a day of mourning despite the fact that doing so has triggered conflicts before; stern warnings by police officers against prayer; and shouting by Muslim women and children affronted by the scene.

Such was the scene on the 10th of Av, a day after the 9th of Av, a fast day marking many things, but above all the destruction of the Jewish Temple. (Jewish tradition mandates a one-day delay of fasts that fall on Shabbat, with the exception of Yom Kippur.)

The Temple Mount is open to people of all backgrounds but only Muslims are permitted to pray there. Tourists were present on Sunday alongside those participating in the holiday pilgrimage, who included the far-right Knesset member Itamar Ben Gvir, the American Jewish right-wing pundit Ben Shapiro, and a group of Texas Christians invested in seeing the Temple rebuilt as a place where all can pray.

“There is to be no ritual!” a policeman told a group of about 30 Jews, almost every one a man, before he waved them through through the Mughrabi gate into the Temple Mount, the holiest site in Judaism and the third holiest in Islam.

But the very presence of the group was itself a ritual, designed to mark the destruction of the Temple, to pray for its rebuilding and to demonstrate Jewish attachment to the site. For these men, the act of walking across the plateau, some shod, others in their bare feet, is an act of resistance and prayer.

The tug of war between the supplicants and the police this Sunday was made more acute by the latest conflict in Gaza, launched Friday by Israel and targeting Islamic Jihad, the terrorist group Israeli officials claim was set to launch guided missiles on Israeli targets. The Iran-backed group launched hundreds of unguided rockets on Israel in retaliation, and on Sunday morning, there were sirens in the Jerusalem area.

The sirens did not sound near the Temple Mount, but the threat they heralded was very much in the air. Israeli officials want to keep the fight to Islamic Jihad, and to keep Hamas from joining. Hamas, the terrorist group that controls the strip, appears to be pleased so far with Israel’s decimation of its rival, but it has in the past been spurred to join in attacks on Israel for what it sees as Jewish encroachments on Muslim areas, including the Temple Mount. Israeli media reported that security officials were watching the Tisha B’Av event warily.

The tensions manifested in a push and pull between the Jewish supplicants and the police officers charged with preventing their pilgrimage from inflaming an already volatile situation.

“We’ll be quiet, we’ll be quiet,” Yehuda Ben David, 18, told a policeman who threatened to cut short the visit as the singing of “Take comfort, take comfort my love” got louder. The singing dropped to a low moan. Then, the officer became preoccupied with his walkie talkie, and Ben David led the group in a new song pleading for the Temple to be rebuilt.

Elchanan Nonhait, a nursing student, was among the 2,000 or so people waiting for the police to break them up into groups of 30 or 40 people to walk around the mount’s periphery. He said he understood the mass entry could spark all-out war, but that sharpened his resolve to stake a Jewish claim to the Temple Mount and to the entire country. 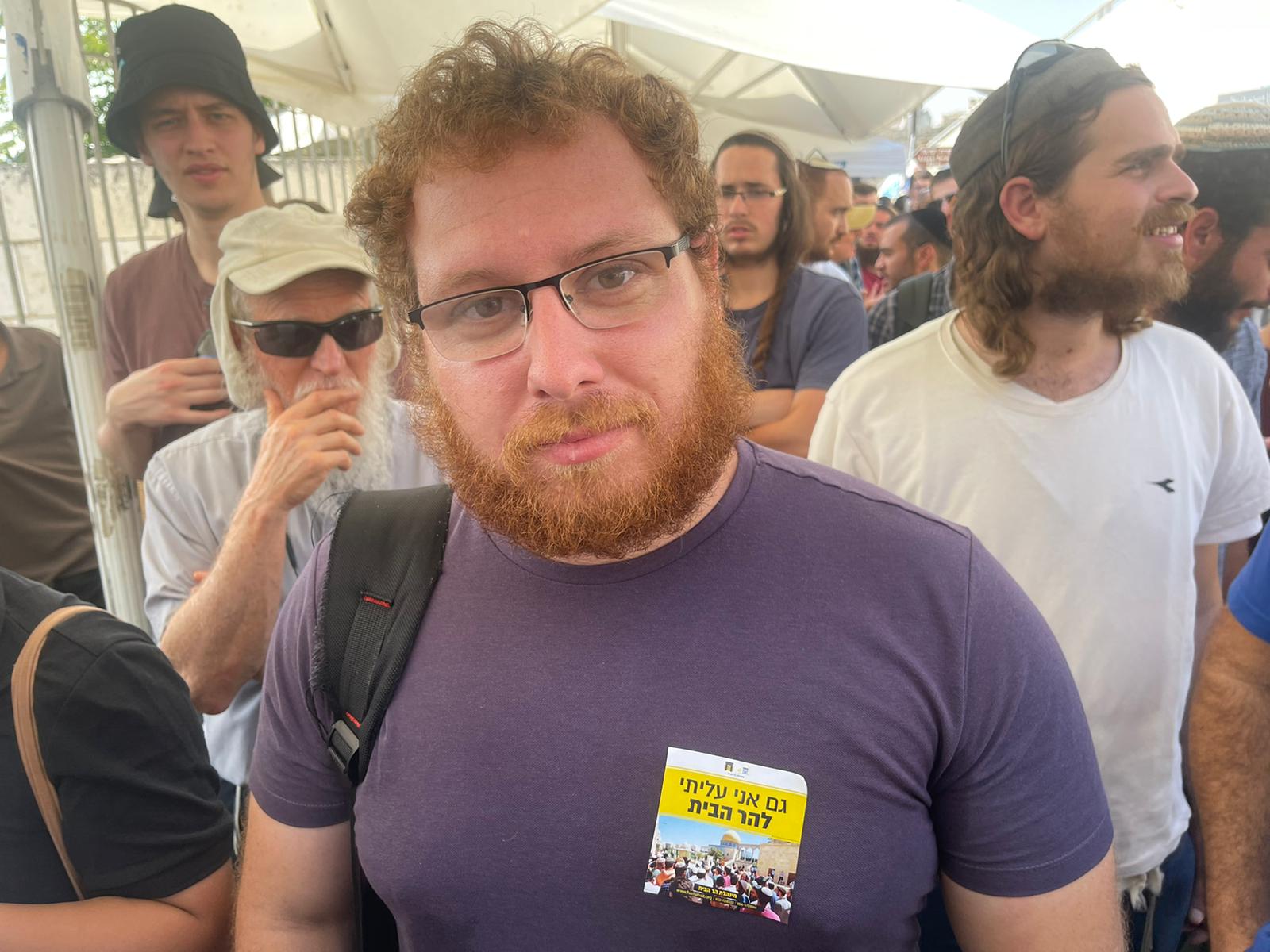 Elhanan Nonhait was among the Jewish pilgrims ascending the Temple Mount Aug. 7, 2022. Police asked him to remove his sticker which they viewed as a provocation. (Ron Kampeas)

“You can’t deny the connection” between mass Jewish Temple Mount events and the risk of violence, he said, “but look, they shut down the Jewish areas around Gaza,” he said, referring to Israeli orders that residents of those areas keep indoors until the threat of rocket fire had abated. “This is the reality — if we can’t be on the Temple Mount, we can’t be anywhere,” he said.

Nonhait wore a sticker on his T-shirt declaring, “I also ascended the Temple Mount,” in Hebrew. An officer ordered him to remove it as he approached Mughrabi Gate.

An abundance of conflicting rules sounded in waves as the supplicants inched along the wooden riser between climbing from the Western Wall plaza and Mughrabi gate. Rabbi Yehuda Glick, a former Knesset member and the president of the Shalom Jerusalem Foundation, which organizes the pilgrimage, walked up and down the line of supplicants waiting to get in and reminded them of the prerequisites for a presence on the Temple Mount: a ritual bath in a mikveh, or a spring, or the sea, before arriving, and no leather footwear. 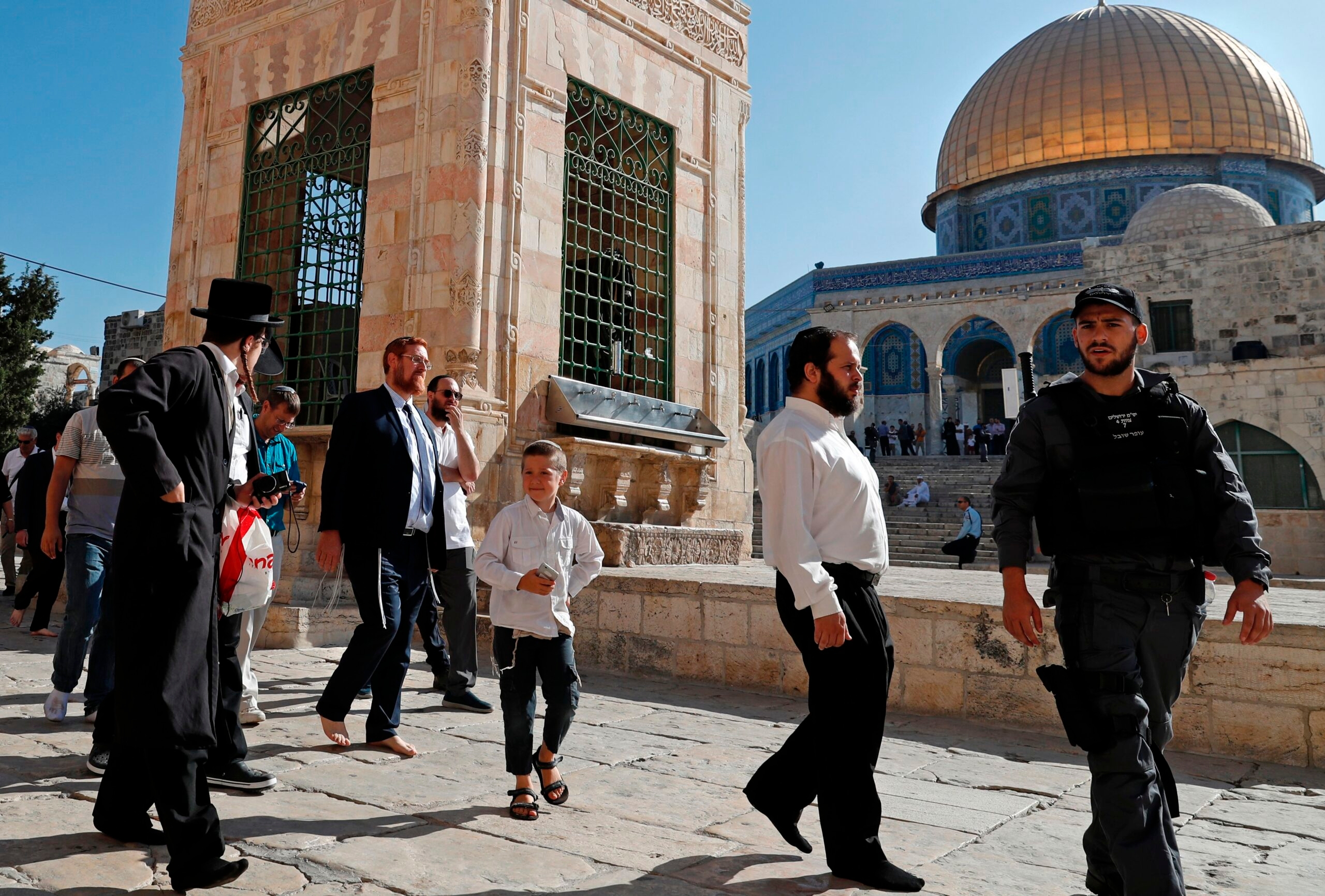 A scattering of Orthodox Jews who still abide by rabbinical rulings last century banning entry onto the mount, based on the risks of traversing Holy Ground forbidden to all but the purest of priests, tried to engage with those waiting in line. They offered fliers to the supplicants and politely reminded them that an array of former chief rabbis have ruled against entry onto the mount.

Most of the supplicants ignored the traditionalists, but one or two engaged, citing competing rulings, sometimes from the same rabbi. There were rapid-fire exchanges quoting ancient sages, and sometimes these veered into debates about piety. “You’re an ignoramus!” one of the Temple Mount supplicants yelled at a youthful traditionalist, who was perched on a ledge overlooking the line.

Outside Mughrabi gate, Glick’s ethos ruled, and he realized it. He was among the first to ascend to the mount, arriving before 5 a.m., and he lavished the others with praise for making the pilgrimage, in between reminding them of the ritual prerequisites.

He introduced reporters to a group of Texan Christians who joined him on his tour, a representation of his hope that the rebuilt Temple will have parts that are open to all for prayer, as it was before it was destroyed two millennia ago.

“This will soon be the house of prayer for all nations,” said Steve Wearp, a Dallas-area resident who imports settlement goods into the United States. “And we have to understand that when the Temple was destroyed, it wasn’t just a loss for the Jewish people, it was a loss for the entire world.” 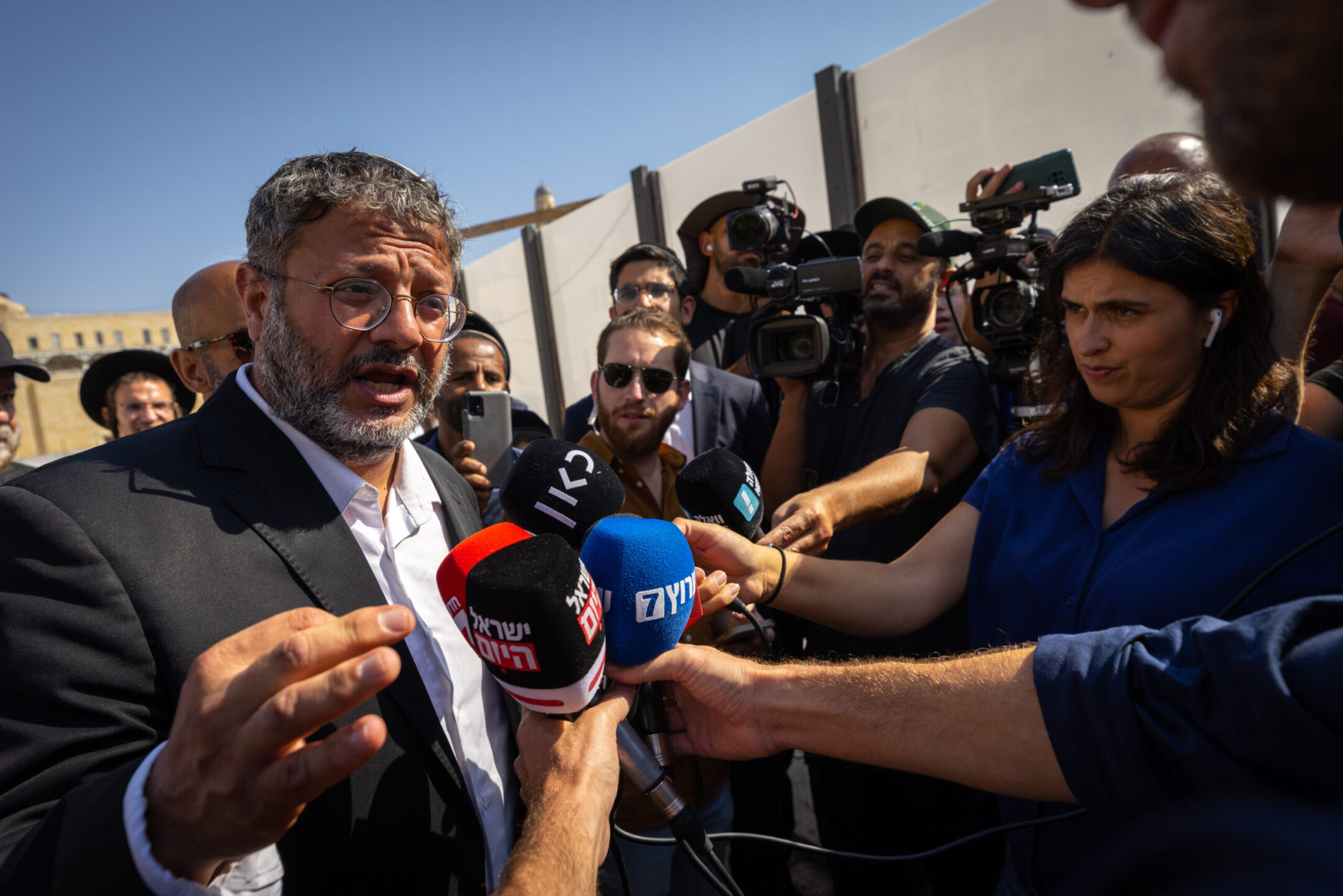 Wearp said he was leading a group of about 200 Christians — including about 30 who were with him in Jerusalem Sunday — who were fasting for Tisha B’Av. “A dry fast,” he said, grimacing. They call themselves “Nations’ Ninth of Av.”

As the supplicants inched up the wooden riser they left behind Glick’s encouragement and approached a reality that is wary, among the police, if not outright hostile, among Muslims. As the group of 30 or so people were shepherded into a waiting area featuring a model of the rebuilt Temple, a husky tall man asked, “How many years since the Temple was destroyed?” When no one answered, he asked again. “1,954,” a man finally answered.

Police scrutiny was intense. A policeman advised the men not to bring attention to themselves as they toured the site. A second officer, wearing sunglasses, warned a man singing loudly to keep quiet. The man, wearing a red sun hat, dropped his voice, but a third officer, tracking the group with a video camera, ran up to his colleague and said he had caught the man in a red hat in prayer. The policeman demanded to see the man’s I.D. and let him off with a warning.

Leaders emerge organically among groups of strangers, and Yehuda Ben David, the 18-year old, was a natural. He started singing songs in a murmur and then a full voice, and then others followed. Muslim women sitting in the shade of trees shouted out “Allahu Akbar,” “God is Great,” and a group of children joined in.

The policeman, echoing every dad who has said “I will stop this car,” pointed at a gate and said, “I marched another group out of here early and I will do the same with you.”

“We’ll be quiet, we’ll be quiet,” Ben David said, and the group followed his lead and remained quiet — but soon began singing again. Ben David faced the Dome of the Rock mosque, which occupies part of the site where the Temple is believed to have stood, and quickly shuckled, making the rocking movements of Orthodox Jews in prayer; others followed.

As the group approached the Chain Gate, where the walk finishes, the men were less abashed, and sang loudly. Some of them bowed toward the Dome of the Rock as they backed out, an ancient way of acknowledging the Temple’s holiness by not turning their backs to it. Police tackled them and pushed them out the gate. The man with the red hat fell to the ground and kissed it, and police picked him up and hustled him out.

Outside the gate, in a cramped plaza leading into the Arab market, the men joined in an ecstatic rendering of “The Temple will be Rebuilt” and then the Shema prayer.

Ben David, a bony teenager, said he was pleased with his leadership. He pulled the wool over the cop’s eyes, he said: He kept the group quiet until it was too late for the policeman to make good on his threat to cut short the visit.

Moreover, those women who shouted Allahu Akbar? “We showed them who’s in charge.”

There were a few scuffles outside the Chain Gate, between police and Jewish supplicants, between the police and some Palestinian protesters. An appearance by Ben Gvir, a far-right Knesset member who regularly visits the Temple Mount at provocative times, occasioned a shouted exchange with Muslim worshippers.

Shapiro, the prominent U.S. Jewish conservative, also visited the mount. “It’s unbelievable!” he told admiring Israeli right-wing media. On Twitter, he emphasized that, contrary to characterizations by Hamas and Islamic Jihad, the Jews on the Temple Mount Sunday were hardly “storming al-Aqsa,” the Arabic name for the Dome of the Rock.

Hamas and Islamic Jihad say they will fire rockets at civilians in response to Jews "storming Al-Aqsa." As one of the thousands of Jews who visited the Temple Mount today, this is what "storming" supposedly looks like. pic.twitter.com/sN0TPZWLsc

The morning ended without Hamas’ entry into the conflict, a win for the Israeli security establishment.