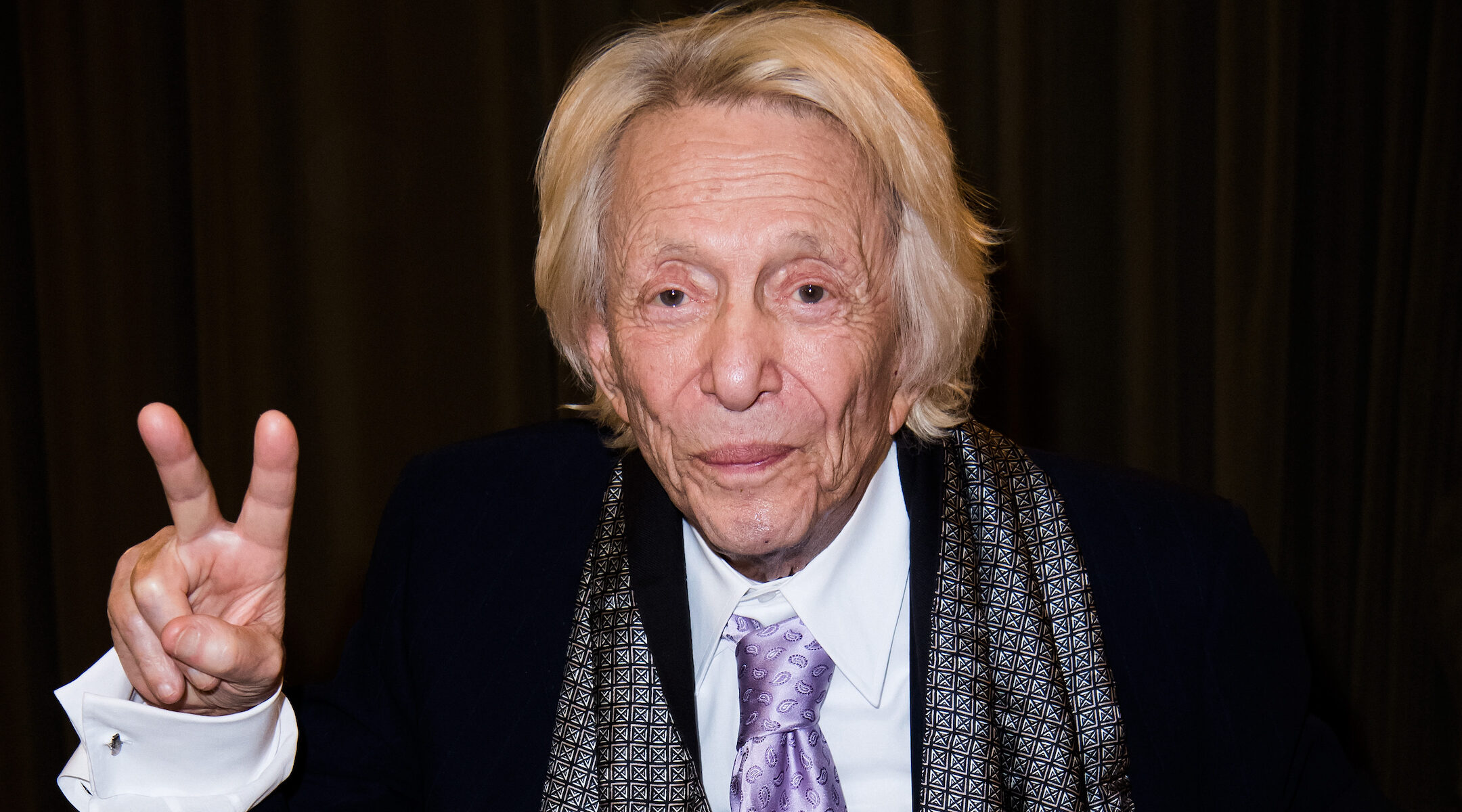 (JTA) — Wars had shaped much of the early life of Rolf Eden, a German-Jewish impresario and nightclub owner who died Thursday in Berlin at the age of 92.

But Eden’s adult years were shaped by the pursuit of pleasure, as he became one of Germany’s leading playboys, an unapologetic womanizer who left an outsized legacy on the Berlin nightlife scene and the country’s broader sex culture.

In 1933, when he was only 3, his family fled the Nazis in Germany for Israel, where Eden, born Rolf Sigmund Sostheim, grew up and fought in Israel’s War of Independence.

Eden served in the Palmach force, which served as the basis for the Israel Defense Forces, as a member of its dreaded convoys that attempted to reach besieged Jerusalem. Many of those were suicide missions that ended with dozens of dead and wounded defenders.

“Today I would be the first to run the other way, but back then I was young and naïve,” Eden said in a 2012 interview with the Süddeutsche Zeitung newspaper. “I was often the first to rush ahead. I was a brave soldier and of course I only wanted to join the very best soldiers. Everyone tried to be a hero and everyone who could fight had to fight. It was all or nothing.”

But after the war, Eden moved to Paris and eventually settled in West Berlin in 1956, beginning a career in entertainment that gave him the reputation as an “eternal playboy” and “king of nightlife” in Berlin.

In 1957, Eden opened the “Eden Saloon,” followed by the “Eden Playboy Club” and “Big Eden,” clubs that dominated the city’s nightlife scene. Eden is widely seen as the first person to open a discotheque in Germany.

At Eden Saloon, a small jazz club, Eden organized striptease shows inspired by the Parisian scene and American-style bikini pageants, at a time when such events were considered lude.

“He was always a bit ahead of the German times,” according to an obituary in DPA, the German news agency.

A tall man with an infectious smile, he nurtured his public image as a playboy — including by sharing in interviews the number of women he believed he had had sex with (estimated at 3,000) along with his dating routine.

“It begins with semi-sweet sparkling wine from the house brand ‘Rolf Eden’ at the house bar, then a little song strummed on the white piano and finally the night in the ‘study,’” the Bietigheimer Zeitung quoted him as saying. By study, the paper added, Eden meant a bedroom with mirrored ceilings.

Eden, who used to drive around Berlin in a Rolls-Royce, had kept a log of the women he had entertained there. He said the log was to defend against alimony claims — Eden used to boast about having “at least seven children from seven different women” — and for tracing purposes in case of a fear of an HIV infection, he told the Neue Deister-Zeitung.

“Joking aside, I have a fantastic relationship with all of my children,” he told the Süddeutsche Zeitung. He also said that he has paid about 30,000 euros in child support each month in certain periods of his life.

The veracity of those boasts, which were part and parcel of Eden’s public image, is not known. But he seemed to relish that image, once leaking to tabloids a claim that his dying will states that whichever woman is in bed with him when he dies will inherit 250,000 marks. Later he told another tabloid that the figure had been raised to 350,000 euros.

“I will die as I lived — on a woman. It must be the most glorious death of all,” he told the BZ tabloid in 2002. “My last lover,” he added, will receive the money “in honor of the thousands of women who have made me happy.” There was no woman in Eden’s bed when he died on Aug. 11, meaning that his will’s so-called “love clause” was not invoked, the German-language edition of the earlybulletins.com website reported.

One of his children, Irit Dolev, lives in Israel, where she and her husband have raised three children. Eden had a close relationship with his daughter in Israel and her children, whom he would enjoy hosting in his Berlin apartment on visits. He also visited Israel, a country he often called his homeland, at least twice a year to visit his family and many friends there, including the late author Yoram Kanyuk, whom Eden knew from the Palmach.

In 2012, Eden said he had never encountered antisemitism in Germany.

“If anything happened to me, I would go to Israel,” he told the Süddeutsche Zeitung. “But I don’t want to leave. It would be such a shame. I love Berlin, I love Germany. And the German women are so beautiful! Wouldn’t we rather talk about women than politics?”

Eden’s attachment to Israel did not extend to Judaism.

“I can’t remember ever being in a synagogue,” he said. ” What am I supposed to do there? Just because I was born into a Jewish family doesn’t mean I have to go there. In the past I might have gone there because people gathered to talk. But that’s completely outdated now: You meet your buddies in cafes and clubs.

“I don’t celebrate the holidays either,” he added. “Why should you fast on Yom Kippur?”

Yet Eden was an advocate of ritual circumcision, or brith milah.

“I don’t care why they decided on it 5,000 years ago. But there’s a good medical reason for circumcision: It’s just more hygienic. Women much prefer that, believe me,” he said in the 2012 interview, which happened amid a rise in antisemitic incidents and following a German court ruling that called the nonmedical circumcision of boys a form of child abuse.

Commenting on those issues, Eden said: “The here and now has always mattered to me. And the future. My advice: pray less, but instead enjoy the beautiful things in life. Then everyone would be better off.”