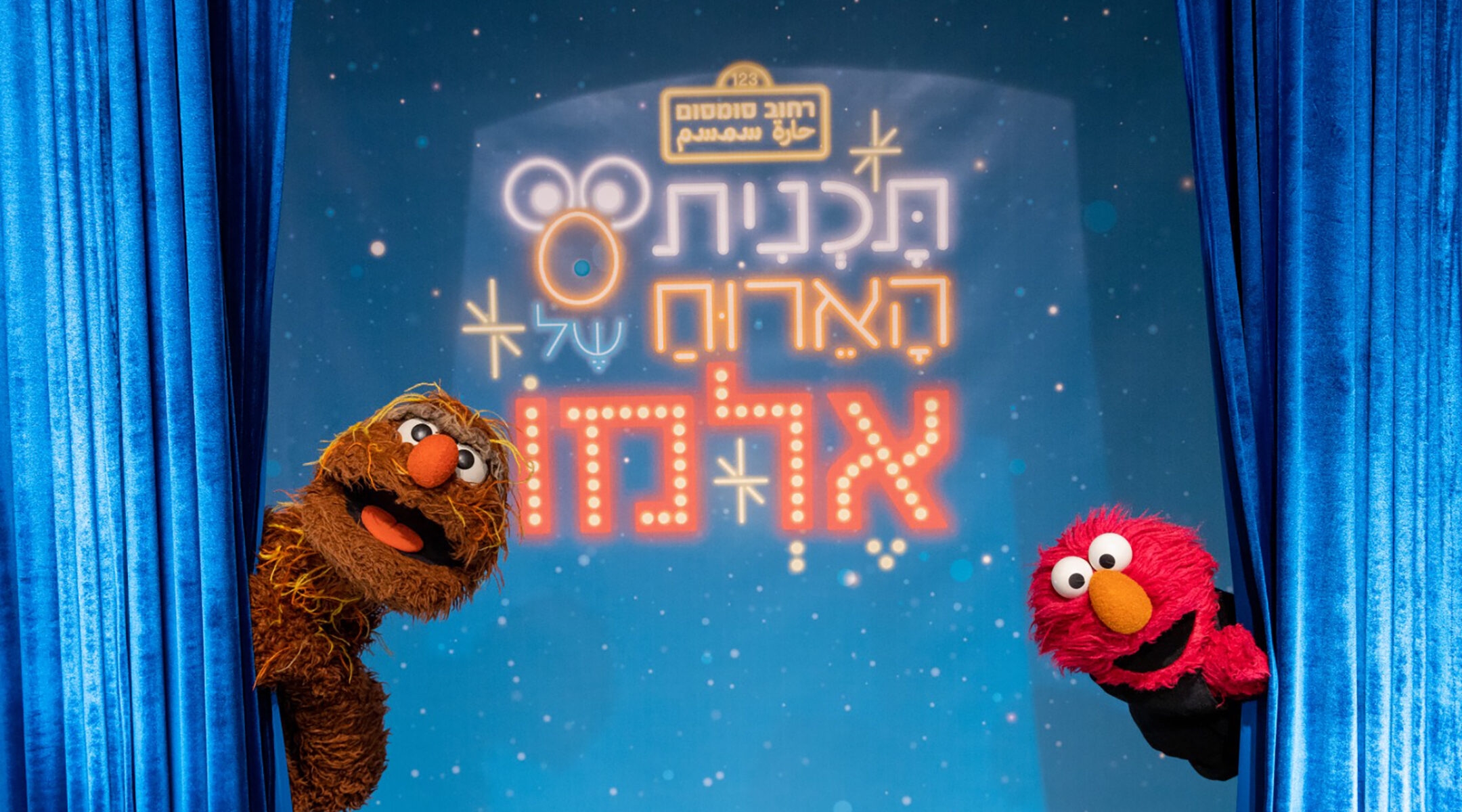 HERZLIYA, Israel (JTA) — Linoy Ashram, the 2020 Olympic all-around champion in rhythmic gymnastics, was clinging to her gold medal on a recent afternoon in her native Israel.

“No,” she told a puppet who was trying to convince her to give up her gold for a piece of fruit. “I wouldn’t exchange this for anything. Not even for your tangerine, not for a lot of money.”

Ashram was on a soundstage taping an episode of “Tochnit Eiruach im Elmo,” a forthcoming Israeli version of the HBO talk show spinoff of “Sesame Street” hosted by Elmo, the lovable red puppet who has been a fixture of children’s programming for more than 40 years.

Israel is the first country to produce a local version of “The Not-Too-Late Show with Elmo,” which has put Elmo in conversation with American celebrities from Jimmy Fallon to Batman. (HBO announced this week that it would be pulling the show off its streaming platform.)

“It is fun for us to do something that is both entertaining and educational, and it is an amazing opportunity, and the excellent response we’ve had from the celebrities we approached has been great,” said Asaf Becker, the show’s content director.

Elmo, whose characteristic high-pitched voice comes across clearly in the Hebrew-language version, too, was overwhelmed by the Israeli celebrities lining up for his talk show.

“Elmo is very excited that you’re here,” he told Ashram, who responded: “I’m excited too.” 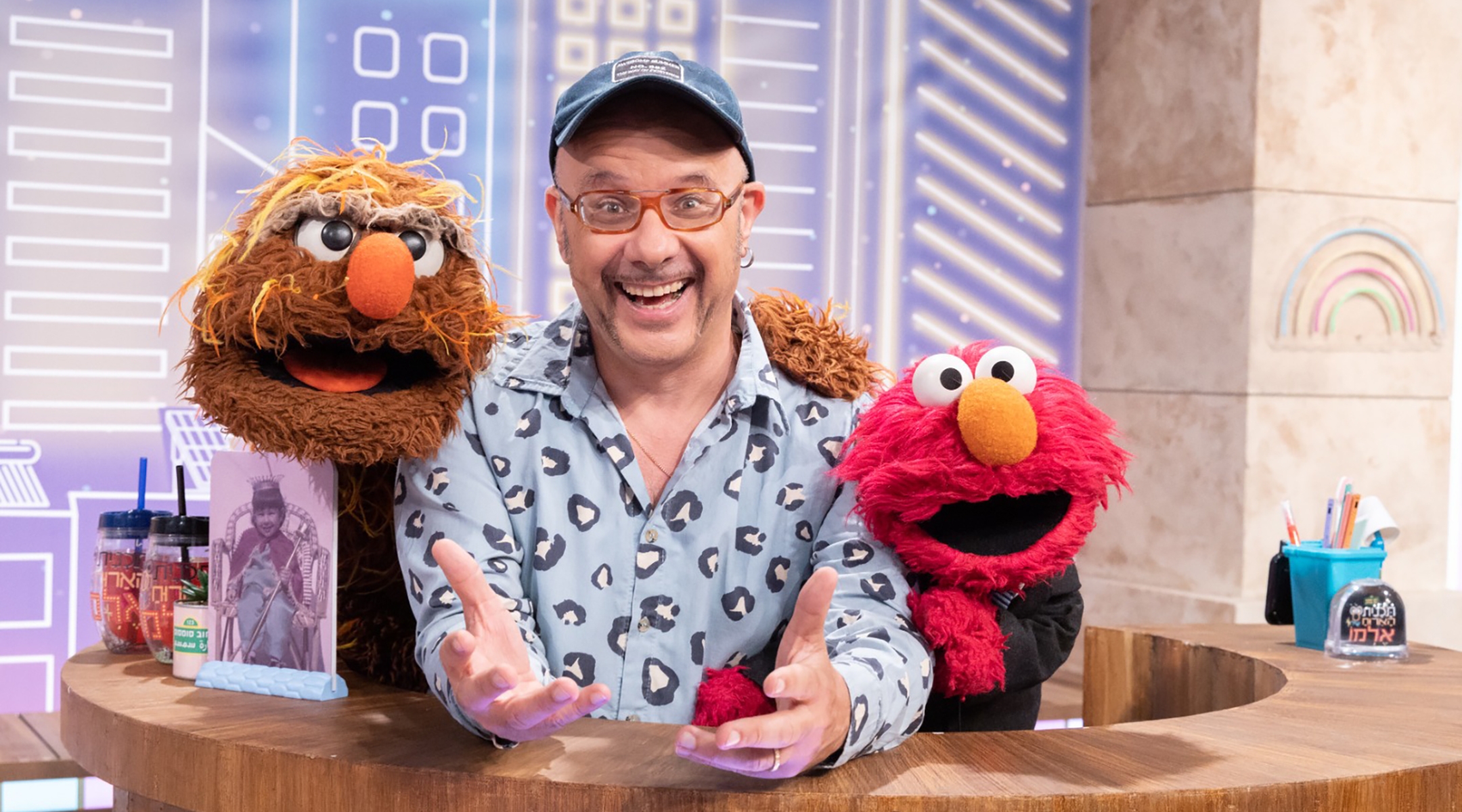 Singer and songwriter Kobi Oz is among Israeli celebrity guests interviewed by Elmo and his sidekick Moishe Oofnik on the Israeli version of “The Not-Too-Late Show with Elmo” Aug. 11, 2022. (Nir Stolo/ Courtesy of Hop Media Group)

Israeli children — and certainly their parents — will recognize Moishe Oofnik, Oscar the Grouch’s Israeli cousin from the long-running Israeli “Sesame Street” adaptation “Rechov Sumsum,” who is a recurring character as Elmo’s sidekick.

In fact, it was Oofnik who was trying to finagle Ashram’s shiny medal. But she rebuffed him, explaining that she’d worked hard for it — something that she urged the audience at home to do when they have important goals. “Work hard every day,” she said. “Practice a lot.”

True to the late-night genre, Elmo and Oofnik came prepared for the interview with anecdotes from the lives of their guests. But it didn’t always work as expected.

“Can you knit with your eyes shut?” Oofnik asked Ashram. The former gymnast seemed perplexed. “I don’t know how to knit, with my eyes open or shut.” Elmo, confusing balls of yarn for the large air-filled accoutrements of ground gymnastics, tried to explain: “But that’s what it said in our research.” The conversation didn’t go very well.

Israel’s “Sesame Street” history is notable. “Rehov Sumsum,” launched in 1983 as a co-production between Israeli Educational Television and the Children’s Television Workshop in the United States, brought the well known characters and theory about high-quality educational programming to Israel. A successor English-language version, “Shalom Sesame,” became required viewing for American Jewish children being taught about Israel. And a third version in the late 1990s, also financed largely by American philanthropists, was pioneering for the way it promoted Israeli-Palestinian coexistence on TV.

That version went off the air amid a collapse of the peace prospects that had been heady at the time it was conceived. Subsequent versions were made by HOP!, the cable channel for preschool children, or were simply dubbed versions of the American show.

Now, the Elmo show, a 14-episode series set to premiere in October, will offer another generation of Israeli children the chance to learn from puppets and their friends.

Avi Becker, a child psychologist and a consultant to the show, said the role of children’s programs can be “to explain, to support and to reassure” young viewers about complicated topics. (Avi Becker is Asaf Becker’s father.)

Danny Labin, Sesame Workshop’s vice president for international projects and social impact, traveled to Israel from the United States for the filming. (His Israeli niece and nephews, one wearing a favorite Cookie Monster T-shirt, joined in the studio audience.)

Elmo’s show, Labin said, “is about asking questions and meeting new people and getting to know them in a deeper way” and aims to nurture the natural curiosity of children and stimulate conversations within families. And while the show remains strictly apolitical, he said it does aim to promote “respect and understanding within Israeli society and regionally.”

Among the guests are Israel Aharoni, 71, an engaging and hip celebrity chef even grandparents will be eager to see; the actor Amir Shurush; and fellow actor Guri Alfi, the son of a British mother, who said he watched “Sesame Street” in England and “Rehov Sumsum” in Israel as a child. Alfi, a comedian who himself has hosted a late night talk show, described his appearance on the show as nothing less than “a childhood dream come true.” His episode is dedicated to humor and the benefits that can come from a good joke.

“Humor aerates many things among us,” he said. “It is a replacement for angry, negative, or violent things. It takes their place.”

Shurush’s appearance will focus on how personal identities can be complex. Many Israeli viewers know that the Eilat-born-and-bred Shurush has his own complex personal identity, as the child of a Christian Arab father and Jewish mother in a country where religious intermarriage is unusual.

Shurush’s delight was not an act. Coming onto the show was “an honor,” he said, in an interview.

“I grew up on the show, with these characters,” he said. “It felt like it was closing a circle in my life, and it was so much fun.”