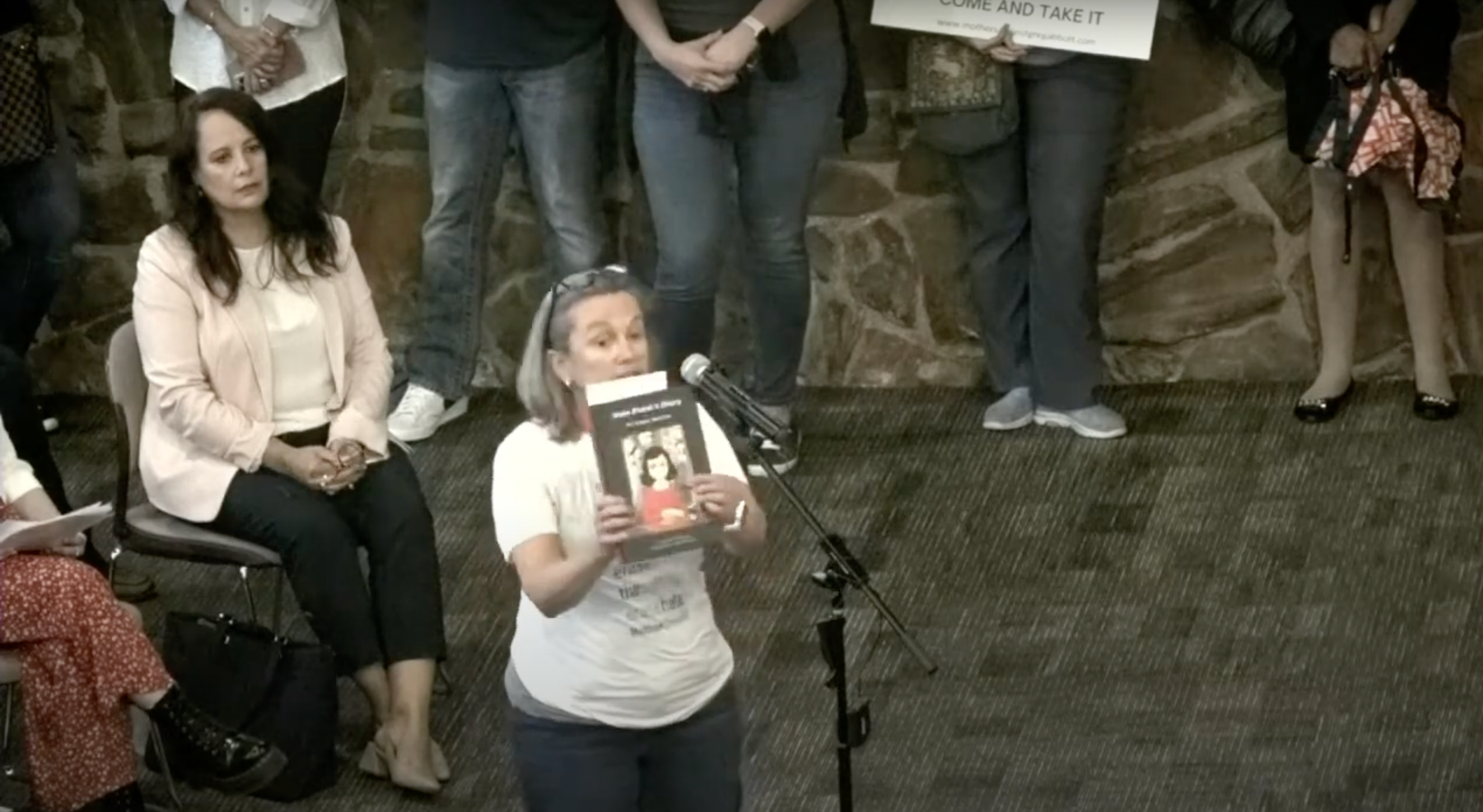 Gretchen Veling reads aloud from "Anne Frank's Diary: The Graphic Adaptation" at a board meeting for the Keller Independent School District in Keller, Texas, Aug. 22, 2022. The district had ordered the removal of the book from its schools the week prior. (Screenshot)
Advertisement

(JTA) — The Texas school district that ordered a version of Anne Frank’s diary to be removed from its shelves last week says it has added the book back into its schools after igniting a media firestorm, as outside groups prepared to send hundreds of copies of the famed Holocaust text to the district.

Keller Independent School District outside Fort Worth had returned “Anne Frank’s Diary: The Graphic Adaptation” as of Friday, along with the Bible and a children’s graphic novel, the district told the Jewish Telegraphic Agency. The district also updated its database of books that have been challenged by parents to indicate that these texts had been reinstated.

The 2018 graphic reimagining of the famous Holocaust diary was caught up, along with the Bible, in a conservative-led push to remove “pornographic” material from the district. The resulting attention made the district the poster child of a national controversy about conservative campaigns to remove books from schools, particularly ones dealing with race, gender and sexual identity. Some Jewish-themed books have been ensnared in the campaigns.

The head of the Anti-Defamation League, the American Jewish Committee, Hadassah and other Jewish groups had condemned the Keller school board’s actions. The district soon insisted that the books were only “under re-evaluation.”

Board president Charles Randklev lashed out at the media and outside critics of the district during the board’s public meeting Monday.

“The media has done an absolute[ly] terrible job on covering what’s happened over the last week within Keller ISD,” he said in a statement, to applause and some yells in the room. “For the record, Keller ISD is not banning the Bible or Anne Frank.”

Attacking what he said was “a misinformation campaign of lies” and an “unhinged mob,” Randklev said the board’s aims were “to protect our children from pornographic material” and “championing transparency by opening up the procurement and challenge process to the public.”

Prior to the board’s announcement that the graphic diary would be back on shelves, multiple organizations said they intended to send copies of different versions of the diary to the district, in a repeat of events from earlier this year when copies of “Maus” flooded into a rural Tennessee school district that had removed the book from its curriculum.

New Jersey-based kosher meat provisioner Abeles & Heymann announced Monday morning that the company would “gift” 50 copies of both the original and graphic versions of Frank’s diary to the district.

“Anti-Semitism and Holocaust denial take many forms. Removing a book that tells the true story of a Jewish girl who was killed by Nazis is one of them,” Seth Leavitt, the CEO of Abeles & Heymann, said in the release Monday. “I’m sending these books so that the people of Keller, Texas have the opportunity to read her story. We cannot erase history.”

In addition, Laney Hawes, a Keller parent who voted on the initial committee to keep Anne Frank in schools and has since become a leading local voice against the board’s policies, said that a different outside benefactor, Nancy Schultz, would be shipping another 100 copies of the books to Keller. Hawes told JTA that Keller would now have enough copies of the diary to put in libraries in the district across multiple grade levels.

“Before this there were only a handful of copies of the books in our school district,” she said. “Now we hope to have them in every single middle, intermediate, and high school library.”

At its meeting Monday, the district also voted to pass its new guidelines for books of all grades. Parents and educators criticized the new guidelines for, among other things, instituting checklists of “unacceptable” material for each grade level, and outright prohibiting any book discussing sexual assault.

Among other restrictions, the new guidelines also prohibit “illustrations or description(s) of nude intimate body parts” at all grade levels. This provision, some parents said, would theoretically keep both the graphic and the unabridged text versions of Frank’s diary out of the district, as Frank describes her genitals in both versions. (The same rubric allows for “some” or “common” depictions of “violence” across all grade levels.)

One parent in the district, Gretchen Veling, read aloud from the graphic adaptation during the board meeting’s public comment section as a way of criticizing the new policy.

“You’re saying you’re going to put this on the shelf,” she said. “However, based on your criteria that you’re emergency-voting on tonight, because you didn’t want to get caught in ‘oh we have a policy, we don’t have a policy,’ this is going to have to be pulled. This is on you.”

But a Keller spokesperson told JTA that under the new guidelines, “Anne Frank’s Diary: The Graphic Adaptation” would still be permitted in schools, because that particular passage “was non-sexual in nature.”

The board meeting was often raucous, with dozens of district parents and employees speaking out against the policies, some wearing shirts and signs supporting free distribution of library books. One speaker, Sherry Simon, identified herself as a parent of three former Keller students, a former school board candidate and as a member of Dallas’ Jewish community who learned about the Holocaust from firsthand survivor testimony.

“Do you know how the Nazis began their campaign against the Jewish people?” Simon asked the board. “It started with the banning of books and ideas. Then the burning of books… Banning books for the sake of politics is a slippery slope.”

A few also spoke out in support of the book removals. One supportive speaker read aloud from the Bible, citing a passage about “God’s love for Israel.” “You’re taking the arrows, but you have a wall of people behind you, the real majority,” he said.

Though Hawes said the district’s new guidelines still concerned her, “we’re so happy ‘The Diary of Anne Frank’ is back.”