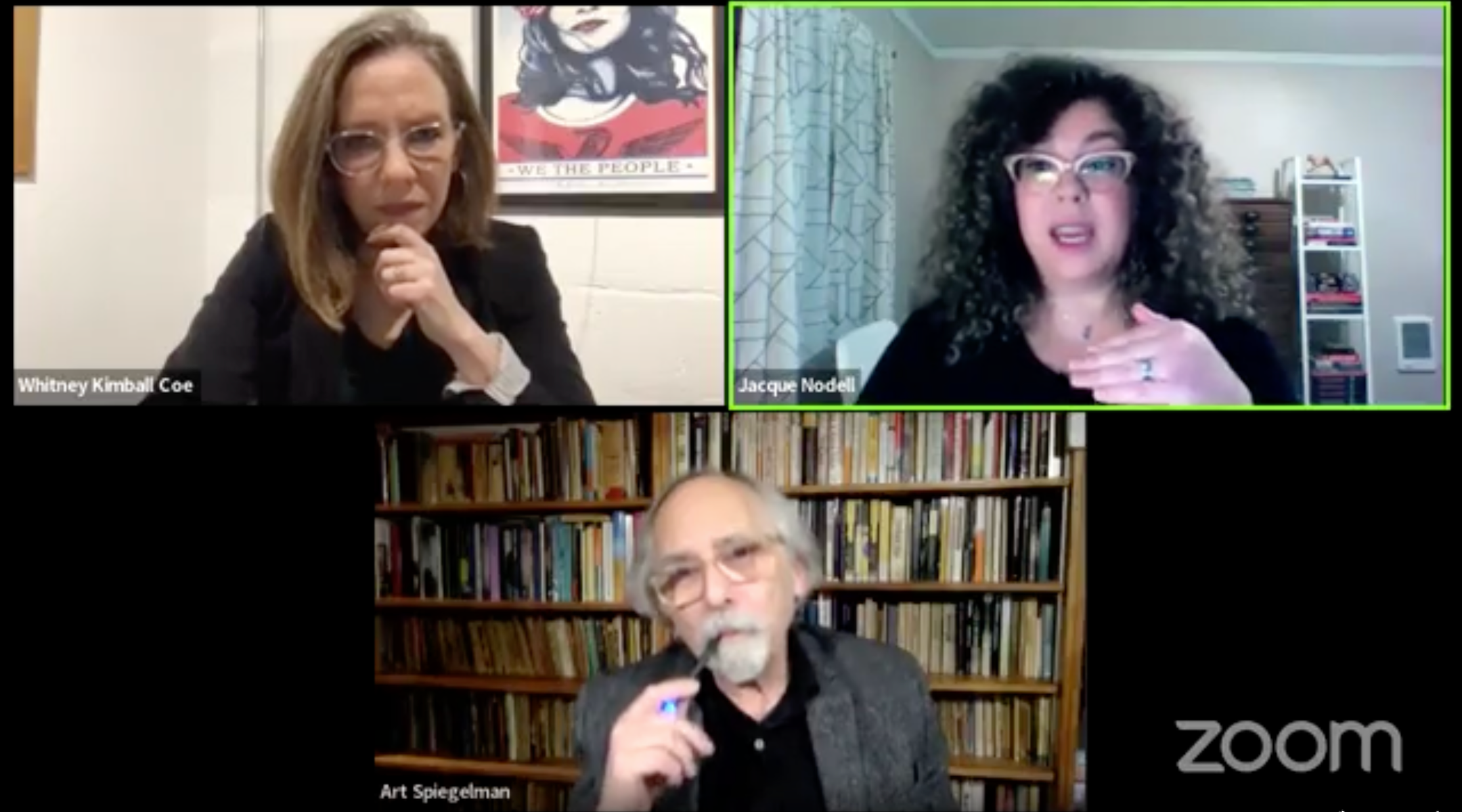 (JTA) — Celebrated comics author Art Spiegelman said that, “on the malevolence-to-ignorance scale,” the Tennessee school board that voted in January to remove his book “Maus” was “closer to ignorance.”

At the same time, Spiegelman acknowledged that he himself has mixed feelings about his illustrated Holocaust memoir being used in middle schools as “Auschwitz for beginners.”

“At first I agreed with the school board,” he told a virtual audience of thousands convened in part by the Jewish Federation of Greater Chattanooga. In some cases, he said, it may be better for people to wait until they have reached college before they read “Maus.” He added, “Hey board, I’m with you: We shouldn’t be teaching this to young kids.”

But, he said, he found the ways in which the McMinn County school board had objected to his book, including their criticisms of its language, illustrations of dead Jews as mice and depiction of Spiegelman’s mother in the nude as she committed suicide following the events of the war, “deeply troubling.”

“They want a fuzzier, warmer, more gentler Holocaust that shows how great the Americans were when coming in to liberate,” he said.

His biggest concern, Spiegelman said, was the “strong political headwinds” that seemed to be undergirding the board’s decision. Referencing the outgrowth of new state laws around race education and other subjects, as well as a recent pastor-led book burning near Nashville, Spiegelman said, “What’s going on now is about controlling: controlling what kids can look at, what kids can read, what kids can see. And it makes them less able to think, not more. And it takes the form of criticisms from this board.”

Spiegelman’s conversation took place nearly a month after the McMinn County school board deemed his Pulitzer Prize-winning comic about his parents’ survival in Auschwitz inappropriate for classroom instruction, but only two weeks since it had broken into public view.

Following a nationwide uproar and intense outside efforts to deliver many copies of the book to students in the county anyway, the Jewish Federation of Greater Chattanooga, 50 miles away, brought the artist to virtually speak to the community, and to the more than 10,000 registered Zoom guests and more who tuned in on Facebook Live.

Moderated by a Jewish local comics historian, Jacque Nodell, and Whitney Kimball Coe, director of the rural policy group Rural Assembly, Spiegelman fielded a handful of student-submitted questions while occasionally puffing on his vape pen. He walked through individual panels from “Maus” that the school board had found objectionable (including one use of the word “bitch,” which he suggested the board could replace with “bagel” or “blintz”), and discussed his reluctant acceptance of the book’s popularity as a Holocaust education tool.

He told his audience that, above all else, the board’s decision reminded him of something fellow Jewish author and artist Maurice Sendak, who himself had lost several family members in the Holocaust, had told him before he died: “One can’t protect kids. They know everything already.”

The conversation was co-sponsored by a Reform and a Conservative congregation in Chattanooga, an Evangelical Lutheran church in the city and Tennessee Holler, the progressive blog and political advocacy site that initially broke the story.

Days before Spiegelman’s talk, the mother of a Jewish public school student in Chattanooga said the teacher of a middle school class covering “the Bible as literature” had incorporated antisemitic material into her class, including instructing the class on “how to torture a Jew” by speaking the traditional Hebrew name of God out loud.

The talk with Spiegelman was not meant to discuss the Bible class incident, and Michael Dzik, executive director of the Chattanooga federation, told the Jewish Telegraphic Agency that moderators were instructed not to ask him about it in order to keep the focus on the author and his work. Still, Spiegelman referenced the event, saying it was an example of an instructor choosing to teach “something poisonous.”

The Jewish community of Chattanooga, the state’s fourth-largest city, numbers around 1,500 individuals out of a metropolitan area of around 500,000, according to Dzik, who said that “less than a dozen” of the region’s Jewish families reside in McMinn County.

Dzik noted that a non-Jewish employee of the Chattanooga federation resides in the county, and that “she’s shocked that this is happening where she lives, where she and her husband have raised kids. … She herself is participating in these conversations.”

Coe, one of the talk’s moderators and another resident in the county, had written an op-ed for her organization’s website the previous week in which she said the global reaction to the “Maus” removal was harmful to her community. “With each op-ed from another coastal publication, Tennessee becomes more alienated, and our public officials dig their heels in deeper,” she implored the national media. “And those of us dissenting locally are left to bridge the gap, trying to figure out how to protect our hometown and organize for change.”

Dzik said he hoped that viewers would be inspired to look beyond McMinn County, to the libraries and school boards in their own backyards, many of which have recently had to field similar parental challenges to books they deemed objectionable for children.

Mostly, Spiegelman was in an upbeat mood. He praised the evening’s dialogue as “inspiring,” saying it “has made me a better person.” He also emphasized that he has largely benefitted, not suffered, from “the very shrewd marketers on the school board,” as the three-decade-old “Maus” climbed back up the bestseller list following the controversy. Antisemitism in general, he wryly noted, has been “good for business.”

He offered his “condolences” to any educator looking to teach “Maus” to their students, and added that he had no objections if they wanted to replace it with a different Holocaust book in their curriculum — so long, he said, as it isn’t John Boyne’s “The Boy In The Striped Pajamas,” which has been widely panned in the wake of the “Maus” controversy.

Spiegelman said, “The guy didn’t do any research whatsoever.”