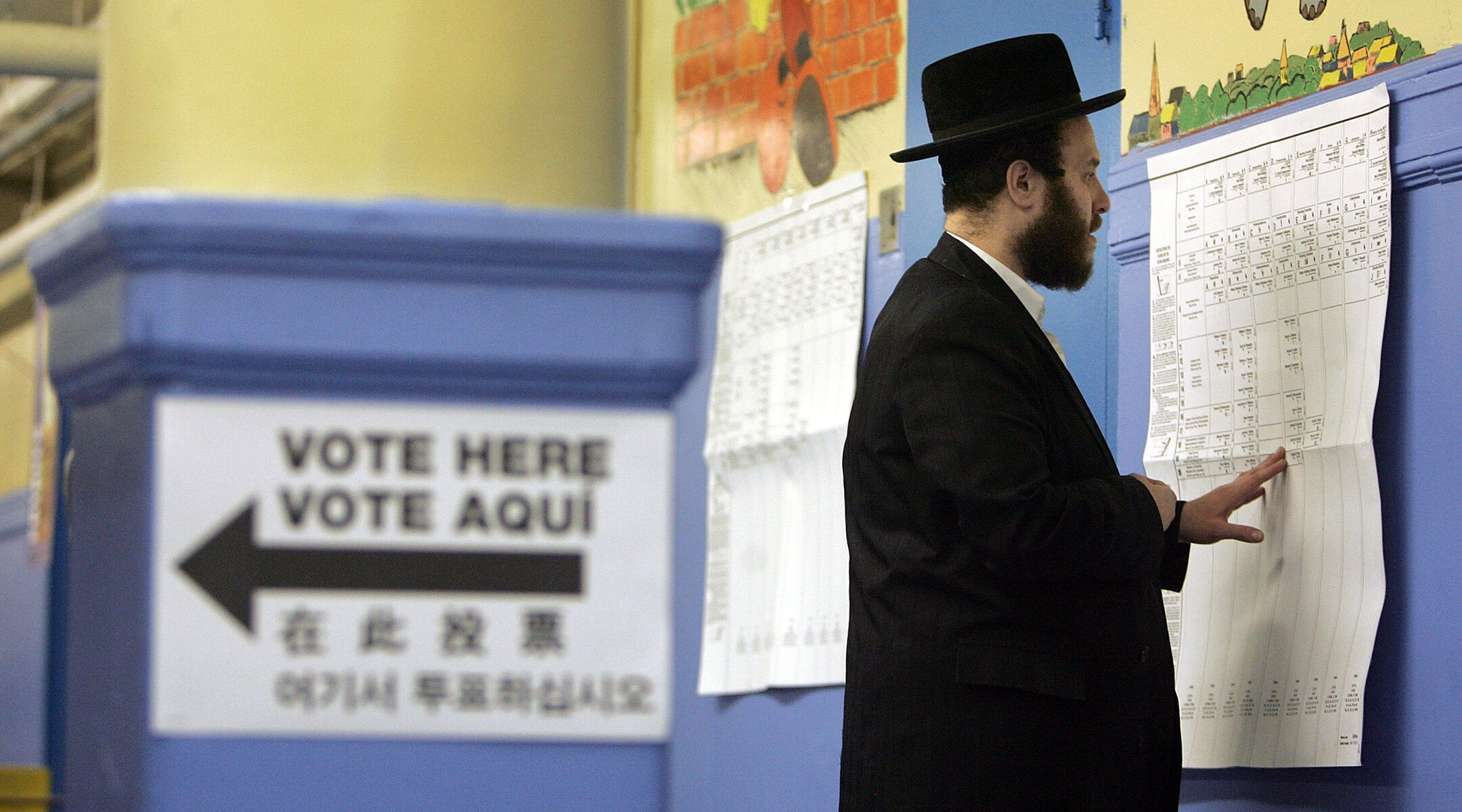 (New York Jewish Week) — With victories in Tuesday’s Democratic primaries by Rep. Jerry Nadler and attorney Dan Goldman, the obituaries for New York City’s “Last Remaining Jewish Congressman” may have turned out to be premature.

Jewish representation in the New York delegation to the House of Representatives is still a fraction of what it was even two decades ago. National outlets noted the dearth of “Jewish seats,” and Nadler made identity politics part of his campaign, telling voters that New York without a Jewish member of Congress would be “unthinkable for a city that is home to more Jewish people than anywhere in the world outside Israel.”

But political observers told the New York Jewish Week that a Jewish candidate representing Jewish interests may no longer be important in a changing city — and especially to a diverse Jewish community that might not even agree on what those Jewish interests are.

“Just because somebody is Jewish does not mean that they are aligned with our values and priorities,” said Matt Nosanchuk, the president of New York Jewish Agenda, a progressive group that does not endorse candidates. “There are certainly many differences between NYJA’s values and those of the current Republican nominee for governor.”

Nosanchuk added that diversity is a value that he supports, and “diversity includes the Jewish community.”

“That’s certainly one aspect of the diversity of the state and city that should continue to be reflected in all levels of government in New York City,” he said.

Yitzchok Fleischer, a member of Borough Park’s Hasidic Bobov community who has close ties with former mayor Bill de Blasio, told the New York Jewish Week that he “does not care if a candidate is Jewish.”

“The issue is what the candidate stands for,” Fleischer said. “The main thing is the issues.”

Last night I spent the final stretch campaigning with @danielsgoldman on 13th Avenue. Was great seeing Dan connect with every individual voter.

Dan is by far the most qualified candidate in this race.

Go out and vote! Let’s bring this home! pic.twitter.com/t1PdVzLD6j

He noted that Borough Park has strong Jewish representation within its local government through Assembly member Simcha Eichenstein and State Sen. Simcha Felder.

“They are excellent for the Jewish community,” Fleischer said. “But that is more localized. They understand the community, that’s why they are very popular in our community. Sometimes our local leaders are more important than Congress.”

From Hasidic neighborhoods to the historically liberal Upper West Side to the famously posh Upper East Side, there are “multiple Jewish presences” flowing throughout the city, said Ruth Messinger, the former Manhattan borough president and president of American Jewish World Service from 1998 to 2016.

“There is a sense of identity that goes with who we see as one of our own,” Messinger said. “That is a piece of our politics.”

Messinger threw her support behind Nadler but told the New York Jewish Week that regardless of Jewish representation, New York will still be a “dramatically Jewish city.”

She recalled the Senate race in 1998, when former Senator Alfonse D’Amato called his rival, then Brooklyn Rep. Chuck Schumer, a “putzhead” in front of a room of Jewish supporters. (The story was first reported by the New York Jewish Week.) The incident suggested that the Catholic D’Amato felt comfortable using a Yiddish vulgarity in front of a Jewish crowd. Still, it backfired: Many voters thought he had gone too far.

“He thought it was a good Yiddish swear word, which it was,” Messinger said. “It’s a city that is not only diverse, but diverse in ways that plays out in a thousand different ways.”

When Messinger was borough president from 1990-1997, she said the Jewish communities were places where she could use her own networks for connection and for organizing.

“To put it differently, when I reached out to African-American and Latino organizations to get them engaged, I went with an awareness that I don’t know exactly what it’s like to be in their church or mosque or their local organization,” Messinger said.

Goldman’s campaign in the 10th District, which included parts of heavily Orthodox Borough Park, showed the importance of appealing to at least one important set of Jewish voters: He was able to lock down the endorsement of major players in the neighborhood, including the influential Bobov community and various Satmar groups.

On Tuesday night, Goldman told the Forward, “My Jewish faith and values have inspired me to dedicate my career to public service, and I look forward to joining Congressman Jerry Nadler in Congress to represent the Jewish community in the city and country.”

But gone are the days when Jewish neighborhoods habitually cast their votes for Jewish candidates. In 2002, there were five Jewish members representing New York City in the House. Even now, Nadler is the only Jew in the delegation.

Mik Moore, a political strategist, is a member of the steering committee of The Jewish Vote, the electoral arm of the progressive activist group Jews for Racial & Economic Justice. He said that the Jewish community, “with or without Jewish elected officials, has excellent access to the halls of government where its interests are well known.”

“Other communities need representation in ways that are no longer as important to American Jews,” Moore said. “We should be helping those community leaders take the steps we took generations ago.”

Messinger suggests that public service doesn’t  have the draw for Jews that it once had.

“I spend a lot of time urging people to go into politics,” Messinger said. “But for various reasons, it doesn’t look like the world’s most attractive profession to people.”

She added that the Asian community has the “best example” of a pipeline of representation in New York politics, which she attributed to the response to a rise in anti-Asian hate crimes.

“There’s a feeling in that community that they need to get more people into public life,” Messinger said. “That behavior of getting more of us into public life, this can bring a group from the margins into the mainstream.”

Moore hopes and expects Jews will “continue to be elected to public office in the city and beyond, with inclusive politics and increasingly reflecting the greater diversity of our own Jewish community.”

The Jewish Vote, for example, backs candidates whose progressive values often do not jibe with centrist and right-leaning Jews, especially on Israel. In one stark example, they backed Goldman’s rival, State Assembly member Yuh-Line Niou, who at one point in the campaign purported to support a boycott of Israel. In southern Westchester County, a pro-Israel PAC, Pro-Israel America, tried to warn Jewish voters away from another eventually successful candidate backed by The Jewish Vote, Rep. Jamaal Bowman, saying he “couldn’t be trusted” on Israel.

Why we’re #JewsForYuhLine: https://t.co/53JO5Omk7p A letter from Jewish #NY10 voters expressing our strong support for Assembly member @Yuhline’s candidacy, to represent our communities in Congress. Read on:

“As people from more and more places around the world come to New York, start families and chase today’s American dreams, some of the most important work that the Jewish community can do is building bridges with future elected officials who themselves are as diverse as the communities they represent,” Loeser said.

He added that what’s more important than getting Jewish leaders elected is getting “Jews of all stripes, including otherwise totally unaffiliated Jews, to overperform in voter turnout.”

“The Jewish community has an opportunity to command attention from policymakers by reliably turning out in huge numbers in elections, making the community a key constituency in every Congressional district in New York City, and in perhaps as many as 100 more Congressional Districts in the U.S.,” Loeser said.