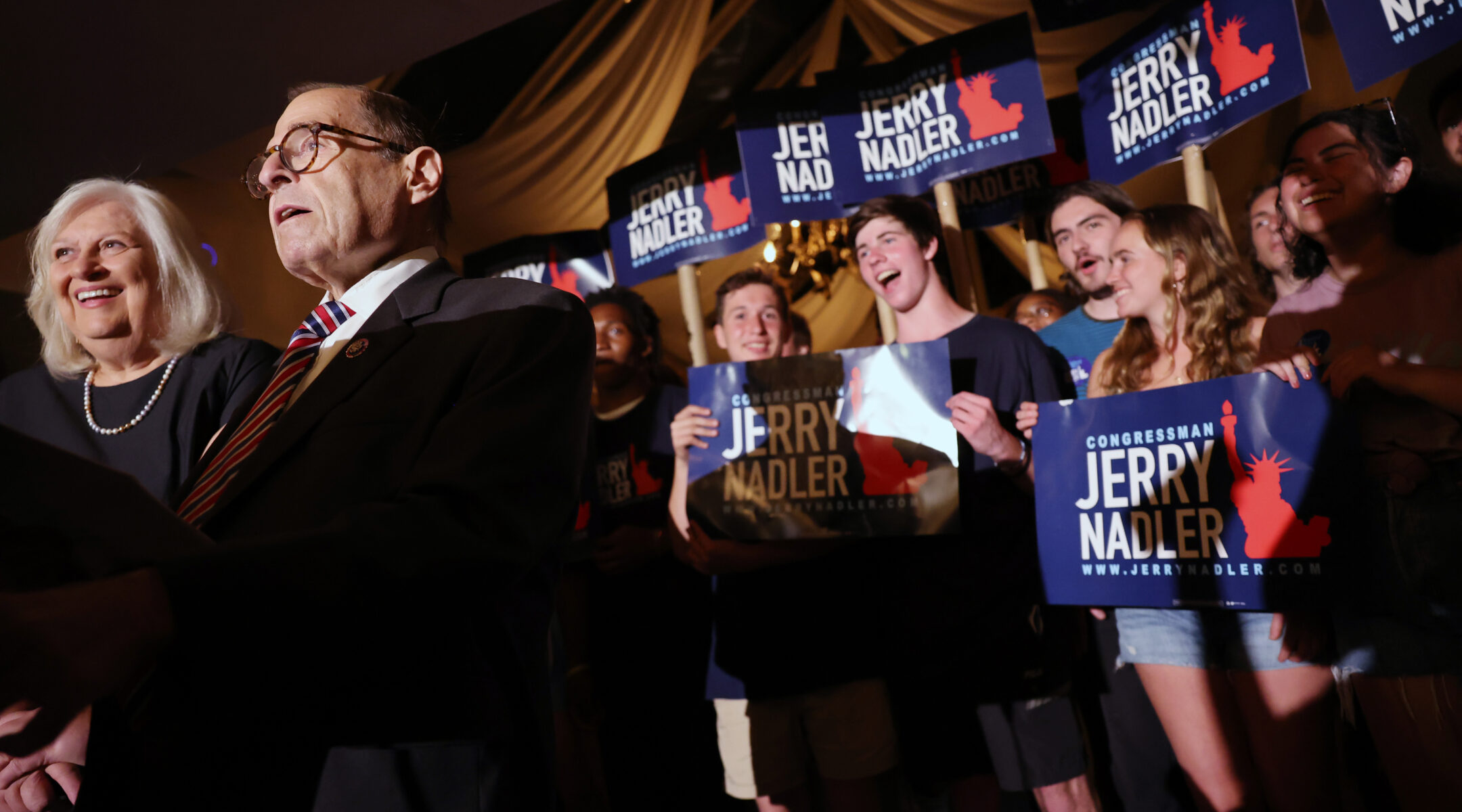 (New York Jewish Week) —  After a contentious primary season where the fate of local Jewish representation in Congress appeared to be in the balance, there will now still be at least one Jewish member representing New York City in the House, as Rep. Jerry Nadler won the Democratic nomination in New York’s District 12.

Nadler won Tuesday’s primary with 56% of the vote, topping Rep. Carolyn Maloney (24%) and Suraj Patel (10%). Nadler and Maloney, both longtime incumbents, were pitted against each other after redistricting merged their respective Upper West Side and Upper East Side districts, turning decades-long colleagues into enemies on the campaign trail.

Nadler, 75, hailing from the historically Jewish and liberal Upper West Side, campaigned in part as being the last Jewish member of New York City’s congressional delegation, and was buoyed by endorsements from Senate Majority Leader Chuck Schumer and a wave of progressive support.

And Nadler will likely have local company in the Jewish caucus after all, after former federal prosecutor Dan Goldman topped progressive candidate Yuh-Line Niou in District 10. Niou, a State Assembly member, at one point seemed to support the Israel boycott until saying late in the campaign that she doesn’t.

Goldman, who funded his campaign with millions of dollars from his own personal fortune, gained support from multiple Orthodox groups in Borough Park. Niou earned the endorsement of progressives, including The Jewish Vote, the electoral arm of Jews for Racial & Economic Justice.

Two other progressive candidates, Rep. Mondaire Jones and Carlina Rivera, drew sizable vote tallies in the same district, which includes lower Manhattan and parts of Brooklyn, and might have spoiled Niou’s chances to consolidate the progressive vote. Unlike last year’s mayoral election, the primaries were not run according to ranked-choice voting, which might have proved the difference for her. Jewish trailblazer Elizabeth Holtzman’s bid to return to Congress after 41 years fell well short.

In New York’s District 11, Max Rose, the Jewish Army veteran who served one term in Congress before being ousted by Republican Nicole Malliotakis in 2020, secured the nomination in District 11, which includes parts of Staten Island and Brooklyn. He and Malliotakis will now have a rematch in November.

The most surprising win of the night comes from State Senate District 59, where the Democratic Socialist-backed Kristen Gonzalez beat former City Council member Elizabeth Crowley, a resounding show of a force for the progressive wing of New York politics.

Maloney reached out to Rockland County’s sizable Hasidic communities, and was backed by the Democratic Majority for Israel’s political action committee. (It was a good night for the DMFI PAC, which congratulated endorsees Hakeem Jeffries [District 8], Adriano Espaillat [13], Ritchie Torres [15] and Rose.)

Biaggi, whose current district includes the sizable Jewish community in the Riverdale section of the Bronx, had distanced herself from progressives like Rep. Alexandria Ocasio-Cortez, expressing her support for Israel and opposition to the Israel boycott in a statement to the Forward.

If he prevails, Maloney will face a tougher reelection bid in the general election. Michael Lawler, a first-term Republican Assemblyman whose district includes the Orthodox community in Ramapo, recently boasted about an internal poll showing him in a statistical tie for the seat against either Maloney or Biaggi.

Zimmerman aims to succeed the moderate pro-Israel Rep. Tom Suozzi, who is retiring after running  for New York governor in the June primaries.

The primary was moved to Aug. 23 due to redistricting in May, which merged and changed districts across New York State after a court found that Democrats had unconstitutionally redrawn district lines.