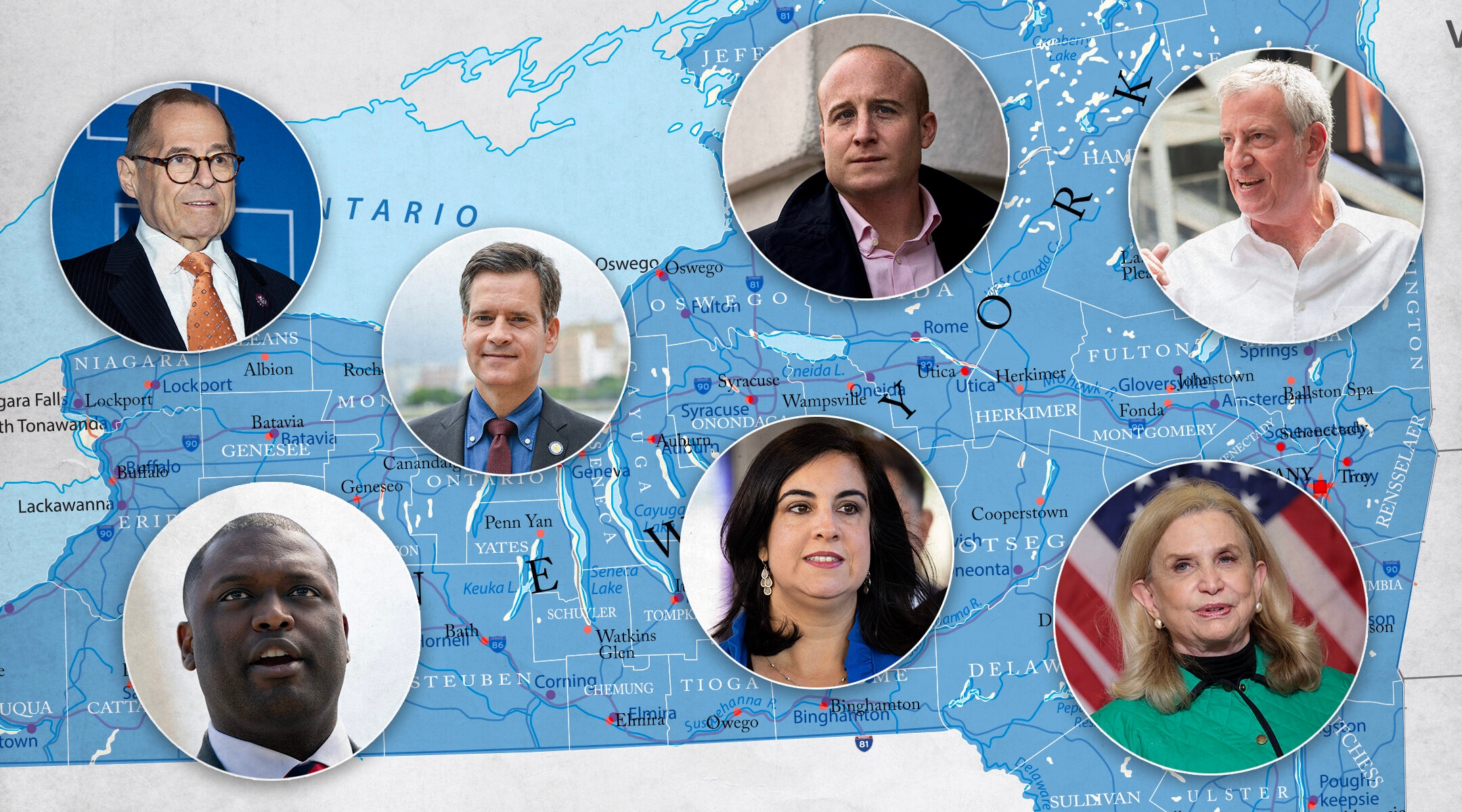 (New York Jewish Week) — The drawn-out redistricting battle in New York finally came to an end on early Saturday morning. As a result, some heavily Jewish electoral districts across the city and state have been split up or merged, and some Jewish politicians will face new reelection challenges this fall.

The new and final maps are the result of a Republican-led lawsuit that challenged the congressional and state Senate lines that were drawn in February. Acting State Supreme Court Justice Patrick McAllister ruled that Democrats unconstitutionally drew lines to their own benefit and appointed Jonathan Cervas, a postdoctoral fellow at Pittsburgh’s Carnegie Mellon University, to redraw the map.

The Jewish Community Relations Council of New York sent McAllister a letter expressing its dismay with some of the new lines. “We find many problematic issues that will be raised by our colleagues in other Jewish organizations,” the letter said, signed by President Cheryl Fishbein and CEO Gideon Taylor.

Among the concerns they cited: The Orthodox community of Borough Park, Brooklyn, was split over two districts, diluting the organizing power of voters there, and a new district combines the Upper West Side and Upper East Side, which previously had been in separate districts.

The new maps, which went into effect immediately, have shaken up many Democratic strongholds and will have a ripple effect across the national political landscape, potentially opening a window for Republicans to take over the House of Representatives.

So just what do these redistricting changes mean for New York’s Jewish voters? With primary elections for statewide offices and state Assembly seats coming up on June 28, followed by state Senate and congressional seats on August 23, here are five races and politicians to keep an eye on.

1. As the UWS and UES unite in a single district, it’s Jerry Nadler vs. Carolyn Maloney.

A showdown between veteran members of Congress is shaping up to be a blockbuster election as Jewish Rep. Jerry Nadler, 74, will run against incumbent Carolyn Maloney, 76, in the newly drawn District 12.

The new districts have lumped the Upper West Side and the Upper East Side together, forcing the two career politicians — who have served 30 years in Congress in their respective districts — to face off against one another.

The JCRC letter argued against this split, saying that “East Side Jews can be clearly differentiated from West Side Jews.”

It continued: “Rarely do the East Side Jews belong to a synagogue located on the West Side or vice versa.”

Nadler is the only Jewish member of Congress to have attended Jewish schools, and his previous district, NY-10, encompassed the most Jews in New York, stretching from the Upper West Side to Brooklyn’s Borough Park. (Rep. Hakeem Jeffries, a Democrat, panned the redistricting for “severing the historic connection” between the two Jewish neighborhoods.)

“I look forward to running in NY-12 — which includes my longtime residence and many communities I have represented throughout my entire career in public service,” Nadler said in a statement. “I say this, even as I remain concerned that this map engenders constitutional flaws.”

Maloney, for her part, is committed to maintaining her seat. “Too often qualified and accomplished women have been told to stand aside for the sake of men’s egos,” she wrote on Twitter. “But I have a lifetime of experience standing up to powerful men.”

Both Maloney and Nadler are Democrats who have passed legislation that have fought for liberal issues over the course of their long tenure in Congress, which makes these new lines a fierce blow to both the politicians and Democrats as a whole.

2. Brooklyn’s Orthodox bloc gets chopped, then taken off the chopping block.

In an earlier version of the contentious redistricted maps, the predominantly Orthodox Brooklyn neighborhoods of Borough Park, Midwood and Flatbush were divided into two districts, the 9th and 10th.

This led Assemblymember Simcha Eichenstein and Councilmember Kalman Yeger to write McAllister a letter last week requesting that the district be “expanded slightly” to include all parts of the bloc.

The final maps appeared to have taken that feedback into account, but not completely: Borough Park remained divided, albeit somewhat less drastically than in the earlier versions.

However, some of Borough Park remains in District 10, which leads us to the return of a familiar face…

3. The return of de Blasio

Even before the new district maps were finalized, former New York City mayor and occasional corn dog eater Bill de Blasio said he will be running for Congress in District 10.

The onetime presidential candidate made the announcement last week on MSNBC’s “Morning Joe,” where he has a history of chumming it up with hosts Joe Scarborough and Mika Brzezinski.

“This is a unicorn,” said de Blasio, a Democrat. “A brand-new congressional seat that no one has ever seen before that has no incumbent.”

District 10 stretches from de Blasio’s home in Park Slope to Lower Manhattan and includes a chunk of Orthodox voters in Borough Park.

This was a problem for the JCRC, which argued in their letter that “Borough Park’s interests are distinct from the Jews of Lower Manhattan, Park Slope, Windsor Terrace and Brownstone Brooklyn,” which make up District 10.

By the end of de Blasio’s stint as mayor, he wasn’t the most beloved figure in the Orthodox community, as his handling of the pandemic created a rift near the end of his second term.

It won’t be an easy race for de Blasio: Rep. Mondaire Jones (NY-17), who is a rare pro-Israel progressive, said he will put his name in the ring for District 10, after upheaval in his Westchester district.

Meanwhile, Rep. Jamaal Bowman, who has been an outspoken critic of Israel in NY-16, will now run to represent a district that has been stripped of its most densely Jewish areas in the Bronx.

4. Nicole Malliotakis prepares to face off against Max Rose, again.

In the 2020 election, former NY-11 Democratic Rep. Max Rose lost his seat to Republican Nicole Malliotakis by six percentage points. Rose, who is Jewish and grew up in Park Slope, is now seeking a rematch after a stint working for the Biden administration.

As the district maps were first being drawn, Democrats fought to include liberal Park Slope in the Staten Island-focused district, which would have given Rose a shot at winning. Instead, the new NY-11 lines — which encompasses all of Staten Island and parts of South Brooklyn, including the Republican stronghold of Bensonhurst — favor Malliotakis.

Malliotakis, naturally, was pleased by this, telling the Brooklyn Eagle that “democracy was preserved” by the new lines.

“The heavy hand of one-party Democrat rule in Albany was rejected by the courts,” said Malliotakis, who voted against certifying the results of the 2020 election following former President Donald Trump’s false claims of a stolen election. “And now the people of our state can choose their elected representatives, not the other way around.”

Malliotakis has strong ties to Israel through her congressional seat. She has made two trips there, and met with prominent leaders such as Israeli Prime Minister Naftali Bennett and Palestinian Authority President Mahmoud Abbas.

The most noteworthy element of redistricting in Long Island for the Jews is that Rep. Lee Zeldin, one of just two Jewish Republicans in Congress, is vacating his seat to run for governor.

The new district lines on the eastern part of Long Island where Zeldin is based — and where former president Donald Trump received 52% of the vote in 2020 — give Republicans an advantage.

Long Island’s population is about 12 percent Jewish, with some 46,000 of them living in the area of Oceanside, Long Beach, Valley Stream and West Hempstead. A large portion of these communities are part of District 4, which is represented by Kathleen Rice, a Democrat who is not running for reelection.
This puts her seat up for grabs in a suburban area that’s home to a swath of Republican Jewish voters. Last year, in a sign of how right-wing the local Jewish population leans, the 5 Towns Jewish Times published a photo of a columnist at the January 6 insurrection at the Capitol.

An investigative piece by Haaretz in 2019 showed that hard-right Orthodox leaders still maintain control over a large majority of the population, which means there is a chance that Rice’s Democratic seat could turn red.