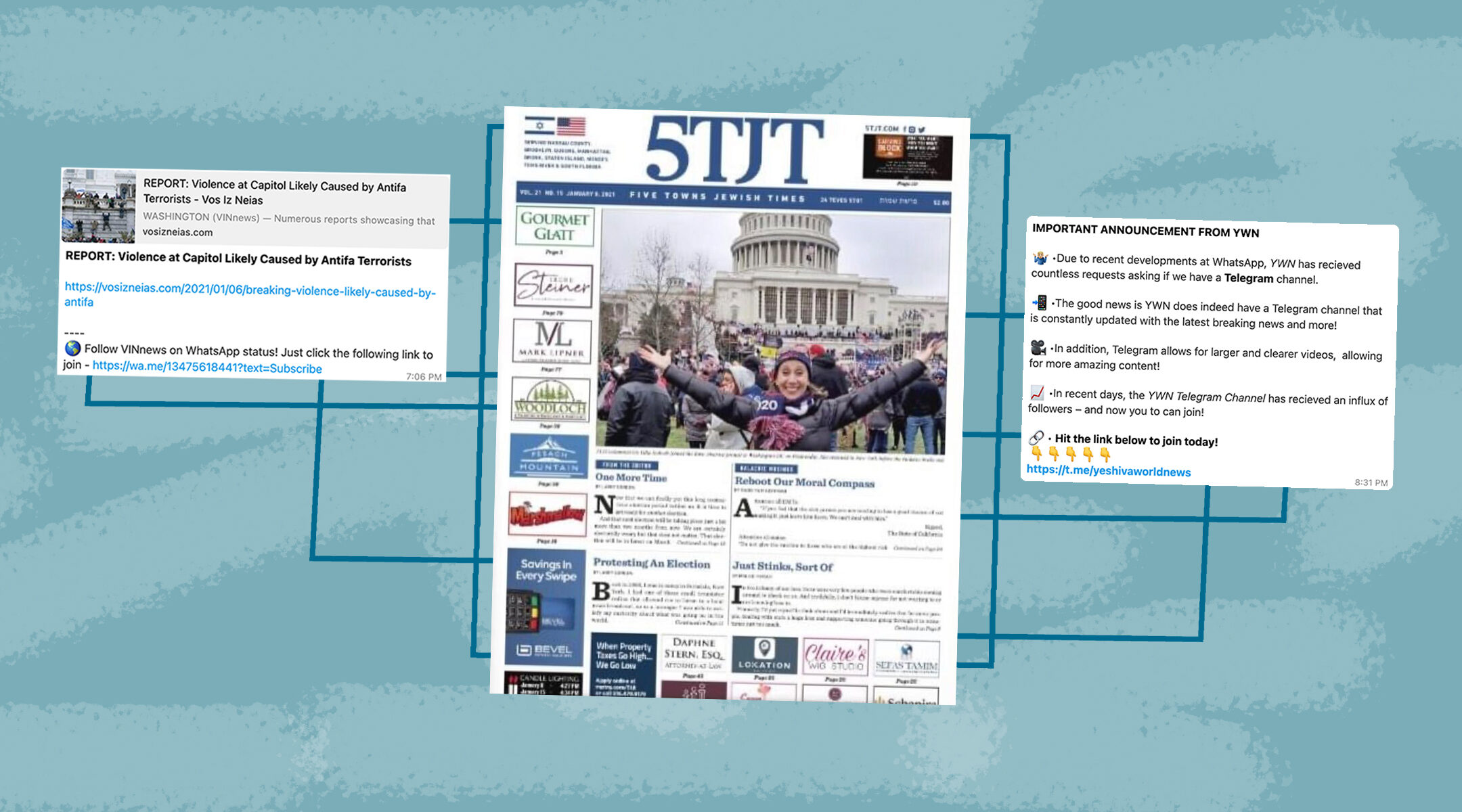 After years of positive coverage of Donald Trump, some Orthodox publications condemned the violence at the Capitol but declined to blame it on the president. (Illustration by Grace Yegel)
Advertisement

(JTA) — On Jan. 7, one day after a pro-Trump mob stormed the Capitol, the 5 Towns Jewish Times, a weekly newspaper catering to the large Orthodox community in Nassau County on Long Island, ran a photo of one of its columnists posing triumphantly in front of a sea of protesters.

“5TJT columnist Dr. Gila Jedwab joined the Save America protest in Washington DC on Wednesday. She returned to New York before the violence broke out,” the caption read.

Reaction was swift and angry. By Friday afternoon, two local Orthodox synagogues were refusing to allow the paper in their buildings because it appeared to glorify the day’s events. On Sunday, the editor of the 5 Towns Jewish Times had apologized for running the photo, saying it spread “a terrible damaging message.”

By Monday morning, one staffer had resigned in protest of the paper’s handling of the front page. Marcy Behrmann Farrell, the online editor, wrote in her resignation letter that she could not work at a publication “that places so little value on respect and sees no value in our laws.”

The dustup appeared to be a rare moment of pushback at a publication serving the Orthodox community, whose media tend to lean conservative and have often embraced President Donald Trump. Since the election, Orthodox papers debated the merits of the Trump campaign’s claims of election fraud, even as those claims were disproven in court.

In the wake of the violence that left five people dead, one Orthodox publication gave credence to right-wing conspiracy theories blaming leftists for the siege. Others seemed to diminish the gravity of the Capitol mob’s actions by comparing them to violent incidents during Black Lives Matter protests over the summer.

A review of the Orthodox media’s coverage of events that have led to bipartisan calls to censure Trump suggests that publishers, editorial staff and readers are unshaken in their commitment to a president they say delivered the goods on Israel, church-state issues and the culture wars, even if they condemn the violence committed by some of his supporters.

After the riots and before Congress members returned from hiding, readers of Vos Iz Neias, an online publication that focuses on the haredi Orthodox world, could read a piece claiming baselessly that Antifa — a loose collection of leftist anti-fascists — was responsible for the violence at the Capitol. (Vos Iz Neias and 5 Towns Jewish Times are paid subscribers to JTA’s syndication service.)

Yeshiva World News took most of its coverage from the mainstream Associated Press, even running one piece with the headline ‘No Surprise: Trump Left Many Clues He Wouldn’t Go Quietly,’ but its chat rooms were full of debates over the role of Antifa in the violence and claims of election fraud.

Ami Magazine, a politically right-wing magazine catering to haredi readers, did not publish anything about the mob at the Capitol on its site, which is not updated daily. Instead it tweeted a photo of American flags flying over the Capitol with an anonymous aphorism: “Ships don’t sink because of the water around them; ships sink because of the water that gets in them. Don’t let what’s happening around you get inside you and weigh you down.”

By Friday, the publication was tweeting about an alleged attack on free speech by the social media companies that had banned Trump for incitement. In a show of solidarity with the president, Ami pinned a now deleted tweet from Trump — an endorsement of a poll conducted by Ami showing broad support for him in the Orthodox community — to the top of its Twitter profile.

Ami’s Jan. 12 issue featured essays by Alan Dershowitz and Wisconsin Gov. Scott Walker that “reflect on the Capitol Hill riots, on Trump’s legacy and on the left’s suppression of free speech,” according to the magazine’s Twitter account.

Vos Iz Neias and Yeshiva World News, in their WhatsApp groups, promoted alternative social media sites, including Gab and Parler, favored by Trump supporters in the days after the riots.

A number of right-wing Orthodox influencers also migrated to alternative platforms as a result of the news.

Michal Weinstein, a pro-Trump influencer who co-organized a pro-Trump rally in Woodmere, Long Island, with Jedwab in October, stopped posting new Instagram stories over the weekend, instead switching to the messaging app Telegram. Another account, lifeandfoodwithmimi, run by an Orthodox Instagram influencer who posts about food and politics and has over 16,000 followers, plugged her Parler page.

Before the violence broke out Mishpacha, a weekly print and online magazine catering to the Orthodox world, had published a roundtable of four writers debating the question of whether Republicans were right to question the legitimacy of the election. The roundtable went online the same day that protesters were gathering at the Capitol for the pro-Trump rally that preceded the violence. Three of the four participants wrote approvingly of members of Congress who intended to challenge the results of the election.

“Attorneys have uncovered a massive amount of fraud during this election,” Yochonon Donn, a writer for Mishpacha, wrote in the roundtable. “Whether or not you believe it to be true, tens of millions of people deeply believe that Biden’s victory is tainted. It is certainly the prerogative of their elected officials to vote for a two-hour debate on the election, even if it doesn’t affect the outcome.”

In a tweet after the violence broke out, Donn called it “a dark, dark day for those of us who believed in Trump and the power of his being a voice for the voiceless.” But in a message Monday to the Jewish Telegraphic Agency, Donn said he didn’t regret supporting Trump after what happened at the Capitol.

“I don’t consider it an ‘insurrection’ or a ‘coup,’” he said. “I’m very disappointed that his plan to remain in office was through undemocratic means. He lost and he should accept it and move on. I thought he would stick to the legal front. He didn’t.”

Gedalia Guttentag, another writer for Mishpacha, called the events at the Capitol a “display of mob rule” in a Jan. 7 piece and called for repentance “on behalf of the vocal minority in our community who have supported the conspiracy-theory driven descent into political instability.” Shana Friedman, Mishpacha’s managing editor, said this week’s issue would include two opinion pieces with a “strongly negative” view of Trump as well as a piece by a rabbi about “how frum [Orthodox] Jews shouldn’t be finding heroes in politicians.”

While condemning the violence at the Capitol, Larry Gordon, the editor and publisher of the 5 Towns Jewish Times, told JTA that he did not regret his vote for Trump in 2016 or 2020.

Gordon said he wasn’t aware of the violence at the Capitol at the time he chose the photo of Jedwab and sent the issue to the printer on Wednesday night at around 6 or 7.

In the apology posted to the publication’s website Sunday, Gordon condemned the violence at the Capitol and said the photo was not intended to glorify violence of any kind.

But even with that apology, Farrell said she had to resign.

“There have been incidents where I’ve been very disappointed in the take that 5TJT has had on current events,” she said.

Jedwab, a dentist, has written over a dozen columns for the paper, with some casting doubt on the need to wear masks to prevent the spread of COVID-19. In June, a Jedwab column questioning mask wearing and advocating instead for greater trust in God prompted a number of letters of complaint to the editor from local doctors. In October, at the pro-Trump rally she helped organize in Woodmere, one rabbi’s speech against mask wearing caused Dov Hikind, a longtime New York state assemblyman, to stalk off in anger.

For Farrell, putting Jedwab on the weekly’s cover on the same day that Trump supporters stormed the Capitol in a bid to overturn the election results showing Joe Biden as the winner was the last straw. She said Orthodox publications were partially responsible for promoting the idea that rebellion was the only remedy to losing an election.

“I enjoyed the work I did as the online editor for 5TJT.com and thank you for the opportunity. But I cannot continue to work for someone who thinks a violent assault on the Capitol is a lead-in to ‘debate our political and philosophical differences in a civil and peaceful manner,’”  Farrell said in her letter of resignation, referring to Gordon’s apology. “It’s a shanda.”