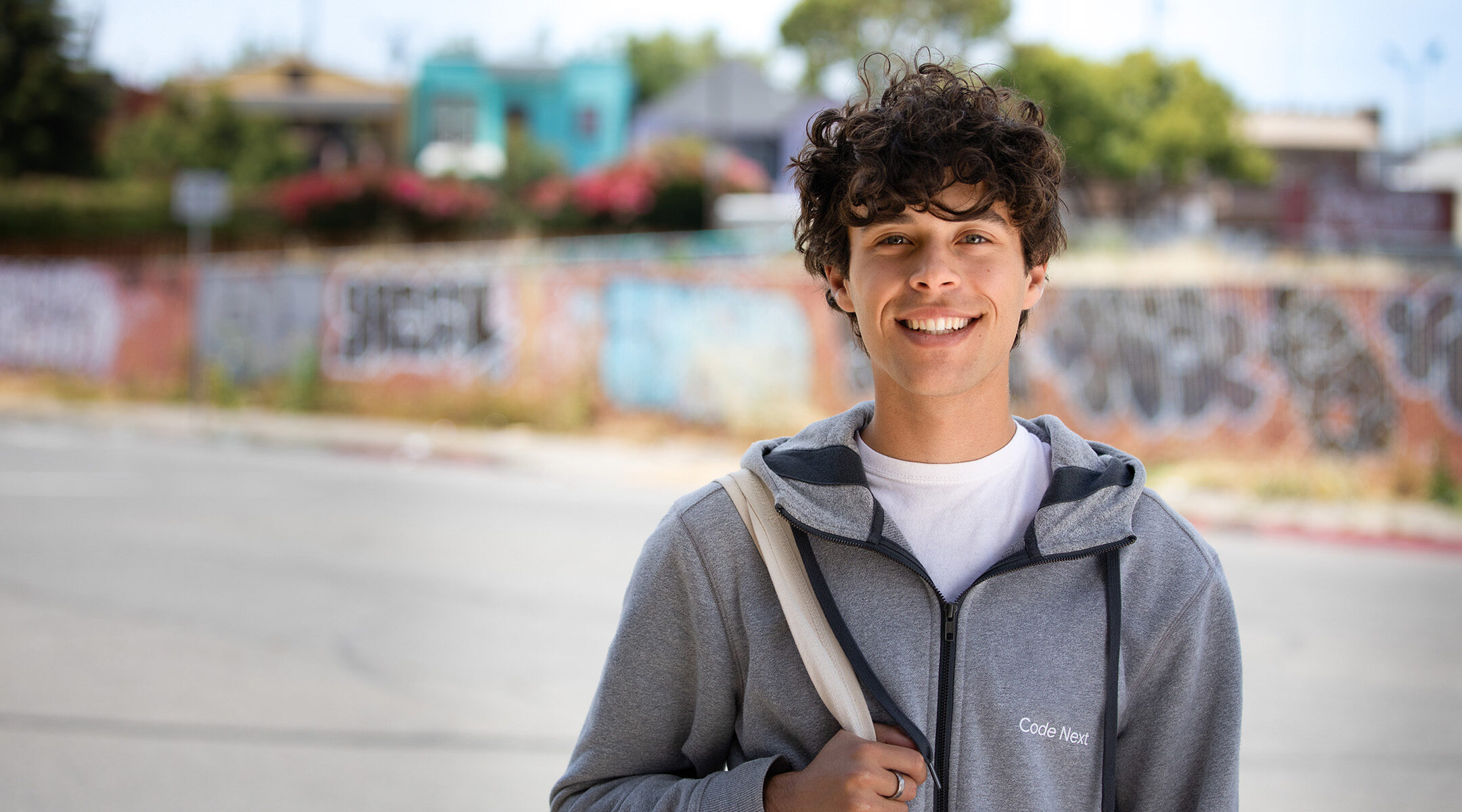 Gideon Buddenhagen, a 17-year-old biracial Jew of color from Oakland, California, has tried to live his life by the guiding principle of tikkun olam — the Jewish value that translates as repairing the world.

“I interpret that to mean repairing my community,” he said. “One way I try to do that is by creating equitable systems that help to uplift marginalized people of color.”

When he was sitting in computer coding class one day in the ninth grade at Oakland Technical High School, Gideon was struck by an idea. He had been serving as a volunteer tutor to a third-grade student of color who had no awareness of computer science. Why not help create a pathway to leadership and success for middle school students of color?

“I saw how I was benefitting from the technology field by taking this class called Google Code Next at Google’s office in Oakland,” Gideon said. “The class is directed towards high school students of color and teaches coding, technology — a whole range of subjects related to computer science. It is funded by Google and run by Google staff, who are usually of color.”

Gideon figured it could be transformative to provide computer technology classes to middle school students of color who generally had no knowledge about computer science.

“I wanted to offer opportunities to learn about computer science as a pathway out of poverty and show these students cool, smart role models who look like them,” he said.

Working with professionals at Google, Gideon created a program to do that. Called Leadership in Motion, it’s now being adopted by Google.

The initiative also earned Gideon the distinction of being one of 15 extraordinary teenagers nationwide to be selected as a recipient of the 2022 Diller Teen Tikkun Olam Award, a program of the Helen Diller Family Foundation. Gideon applied for the award after reading about it in a newsletter from his synagogue, Kehilla Community Synagogue in Oakland.

Receiving the Tikkun Olam Award “helps me accelerate my education and deepens my connection with the Jewish community in a way I might not have had without it,” Gideon said. “It gives me the ability to meet so many teen leaders and to connect with a network of amazing people who do wonderful things in the world and are eager to help uplift and support one another.”

The $36,000 award was founded in 2007 by Bay Area philanthropist Helen Diller to recognize socially committed young leaders whose dedication to volunteerism exemplifies the spirit of tikkun olam. This year’s awardees addressed such societal challenges as climate change, the need to support veterans, refugees, and senior citizens.

Google staff were supportive of Gideon’s idea when he broached it at a Google Code Next class he took in 2020. One staff member worked with him to figure out how to actualize it and build a curriculum. While the COVID pandemic raged, Gideon spent much of 2020 and 2021 developing connections to local nonprofit organizations with after-school programs.

One was Bridge the Gap College Prep in Marin City, which offered a program specifically directed toward area students of color often underrepresented in professional fields and without access to the meaningful opportunities that white students usually receive, Gideon said.

In the fall of 2021, Gideon and three other volunteer high school students did a pilot project with middle school students of color from Gap College Prep, teaching them about computer science. The classes all were held virtually because of the pandemic.

Last spring another pilot program was held for Bridge the Gap’s sixth-grade students.

That one-hour-a-day, eight-week program proved successful. Last July, two groups of middle school students of color met in person at the Google Code Next lab in Oakland for a two-hour day of learning at which Gideon and a friend served as mentors.

“It proved you can teach that many students, and we learned that having more mentors might be helpful,” Gideon said.

A second summer program was scheduled for this summer with a group of middle school students of color from a different after-school program in Oakland. These students were scheduled to attend for two hours every Tuesday and Thursday for four weeks.

“There is supervision from Google from time to time, but it is entirely run by the high school-age mentors,” Gideon said.

After graduating high school with honors, Gideon is now looking forward to replicating Leadership in Motion on the East Coast, where he will be attending Brown University this fall. He already has spoken about it with Google, which plans to adopt it for its Google Code Next office in New York City.