In an effort to reach young families, Temple Emanu-El opens an outpost in Chelsea 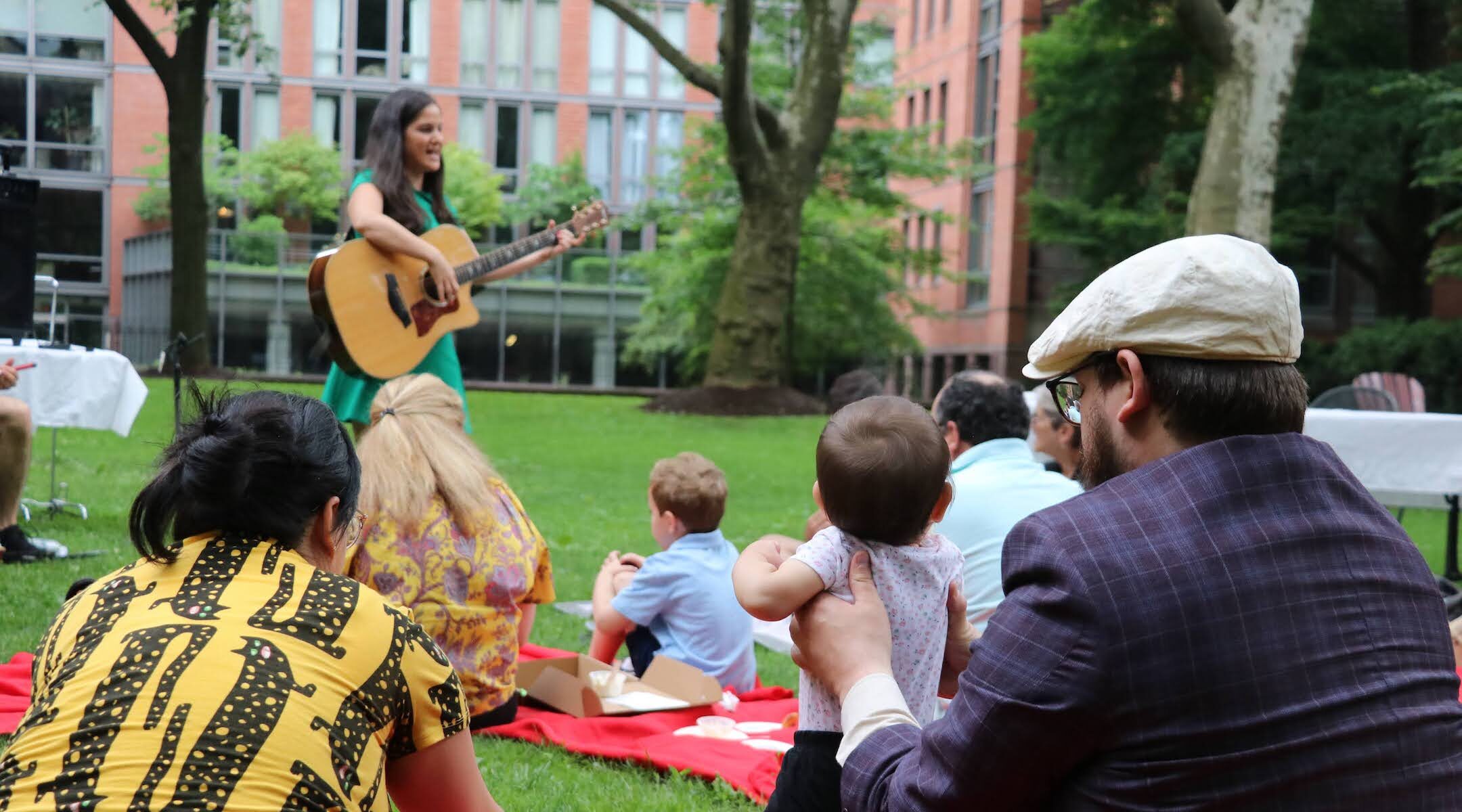 Temple Emanu-El has opened a campus in West Chelsea with programming curated for families with children under 3. (Temple Emanu-El)
Advertisement

(New York Jewish Week) – For most parents with young children, getting around the city during rush hour — which usually coincides with dinnertime and “baby witching hour” — can be a monumental journey. For parents raising Jewish kids in downtown Manhattan, getting to the Upper East Side or even Midtown for Friday evening Shabbat services is a non-starter.

This summer, Emanu-El announced a new downtown pilot program, designed to meet the increasing need for Jewish programming in an area of the city where there are few non-Orthodox synagogues. Located inside the General Theological Seminary, a historic institution at 440 West 21st St. that’s affiliated with the Episcopal Church, Emanu-El Downtown, as it is called, will host programming for families and young children five days a week, including a Friday morning pre-Shabbat celebration.

“You can’t expect people to come to you, you have to go to them,” said Rabbi Joshua Davidson, who has been at the helm of Emanu-El’s clergy for nearly a decade.

The idea for additional Jewish programming below 30th Street came from “recognizing there were a great many individuals and families of the younger generation living downtown, and also recognizing that we want to grow that population within the congregation,” said Davidson. He said he’s been working on an idea for a downtown campus for more than five years, though the pandemic delayed many of the plans.

For parents in Chelsea like Jennifer Marks, who’s lived in the neighborhood for eight years, Emanu-El’s new campus means she’ll be able to give her 1-year-old, Henry, the Jewish experiences that she always wanted for him without having to move uptown or out of the city to find it.

When they do get to services, Marks’ family heads to the East Side to a different Reform Synagogue where Henry’s grandparents belong. But that involves heading uptown on the subway during rush hour, packing dinner plus copious amounts of snacks, and racing home in order to make Henry’s bedtime.

“The timing for our family is really perfect,” Marks told the New York Jewish Week. “I grew up going to the JCC for preschool, so I was really hoping that we could kind of have a similar experience for my son, Henry, but there were really no [Reform] synagogues that are close to us.”

“I’m excited for [Henry] to be able to have a little bit of the Jewish flavor to some of his activities, because he hasn’t had that yet and I have really wanted that for him,” she added.

For now, Emanu-El Downtown will focus on programming for families with children under 3. The aim is to “create a space where families can connect with each other and enjoy doing Jewish with each other,” said director Dina Mann.

Emanu-El Downtown is launching into its first year of programming with a free New Year Festival on Sunday, Sept. 18. With over 200 people registered, prospective families will be able to meet each other and learn more about upcoming programming, as well as attend a workshop by children’s book illustrator and author Ann Koffsky and a musical performance by Ramblin’ Dan’s Freewheeling Band.

“We’re asking, ‘What are the cool things that are happening outside of the Jewish space that people enjoy doing? What stores do they go to? What other programs do they attend? How can we bring all these interesting people in New York City into the space and create dynamic programming?’” Mann said of the programming philosophy.

The focus of the downtown location will not be worship, said Mann. Instead, the lineup of workshops and classes throughout the fall includes a twice-weekly playgroup for 2-year-olds, support and skills groups for new parents and a weekly Hebrew music class. The programs are open to current members of Temple Emanu-El as well as non-members, for now.

In addition, the Chelsea campus will host an after-school religious and Hebrew school for elementary school-aged students, including  transportation from the nearby public elementary schools.

For Jen Gellar, who lives in Chelsea, the Hebrew school option fit exactly what she was looking for for her 6-year-old daughter. “I’m really excited that she has a group of her friends who she’s going to be doing this with every week,” Gellar, who said that her daughter has several Jewish friends from her local public school.

For this school year, tuition is $1,925 for members and $2,950 for non-members. However, the school is committed to not turning any student away for financial reasons and is offering scholarships, Mann said.

“Temple Emanu-El is an inclusive space and we’re looking to just duplicate that inclusivity,” said Mann of the new space. “Additionally, because we’re downtown, there is more of a creative, edgy community here, and we want to create programs that are exciting and dynamic.” 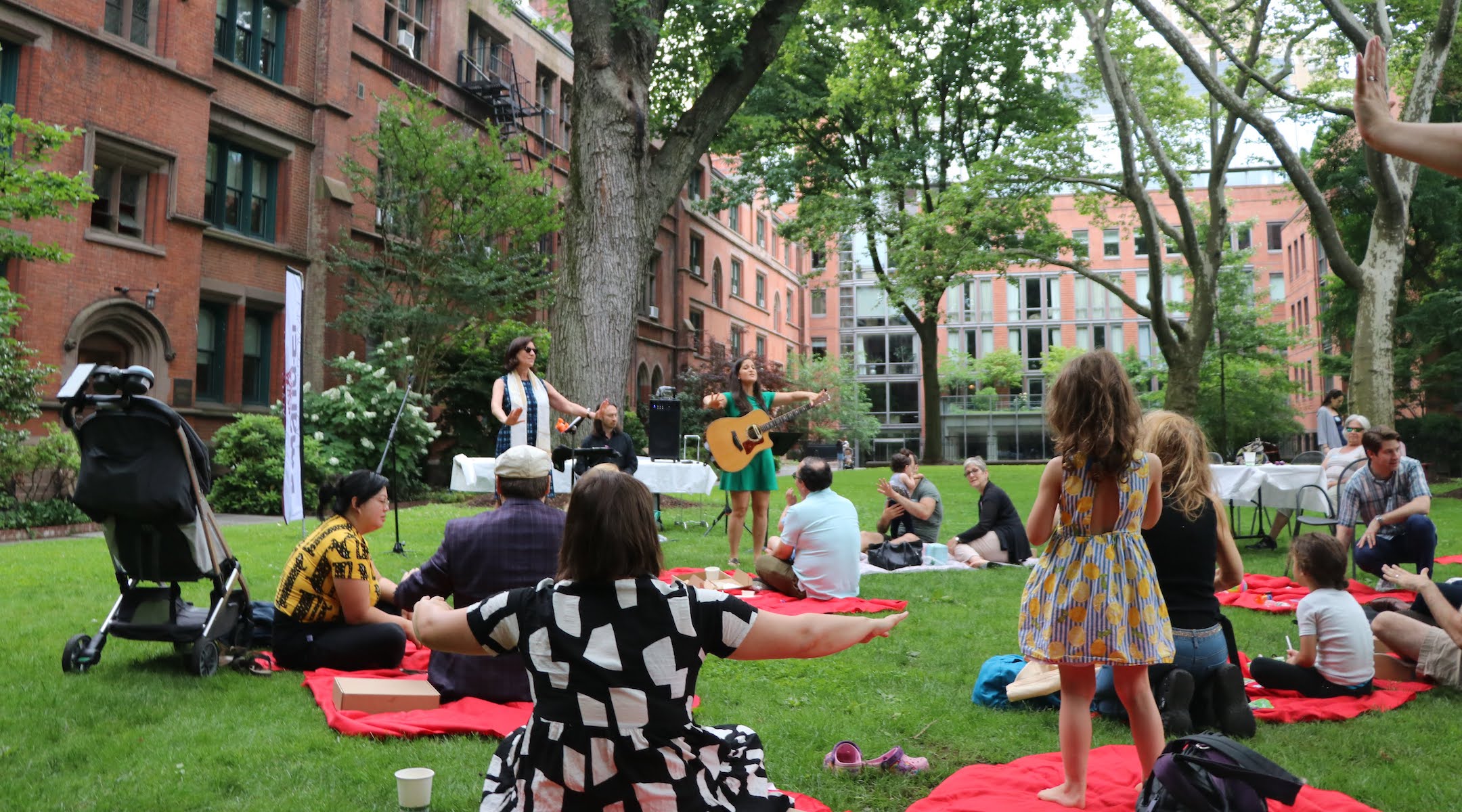 The campus is being leased from the General Theological Seminary at 440 w 21st St. (Temple Emanu-El)

To find a location for the new outpost, Emanu-El hired Cohen Center for Modern Jewish Studies at Brandeis University to survey Manhattan neighborhoods and identify where Jews were living who might be well served by new Jewish programming. The survey, which was conducted in 2020, found that there are 94,000 Jewish people below 59th Street, including more than 8,000 Jewish children — about 15% of the total population.

The survey also found a dearth of Reform congregations in Chelsea and Flatiron, in particular, which also happened to have a perfect space for a new campus at the General Theological Seminary, which Davidson said has been a partner from very early on. Located in a historic Gothic Revival building almost a full city block long and more than 200 years old, with an impressive interior courtyard and manicured gardens, its grandeur might be one of the only places in the city that can compare with the dramatic sanctuary in Temple Emanu-El’s 65th Street location. For at least this first year of programming, Emanu-El is leasing the space from the seminary.

The opening of the downtown campus is in line with Temple Emanu-El’s mission to reach different demographics. “It’s the same ideology that lies behind the Streicker Outreach Center,” Rabbi Davidson said, referring to its wide-ranging program of public events and classes. “We’re approaching three groups: young professionals, unaffiliated families, and people of any generation who are just trying to learn about and explore Jewish life.”

The downtown campus was made possible by “generous philanthropy of members who support the vision,” he added, and was raised through a special gifts campaign. He declined to specify how much money was raised.

As for the long-term plan for Emanu-El Downtown, “We’re going to have to see where it goes,” Davidson said. “My intuition is that there’s a population out there that will embrace increasing numbers of opportunities.”

“I’m excited to find ways to serve those within the Jewish community who have not attached themselves yet to one organization or another,” he added. “Some of these folks will become members, some of them won’t. But one way or the other, they are seeing the institution and the Jewish community as an important touchpoint in the education of their children.”