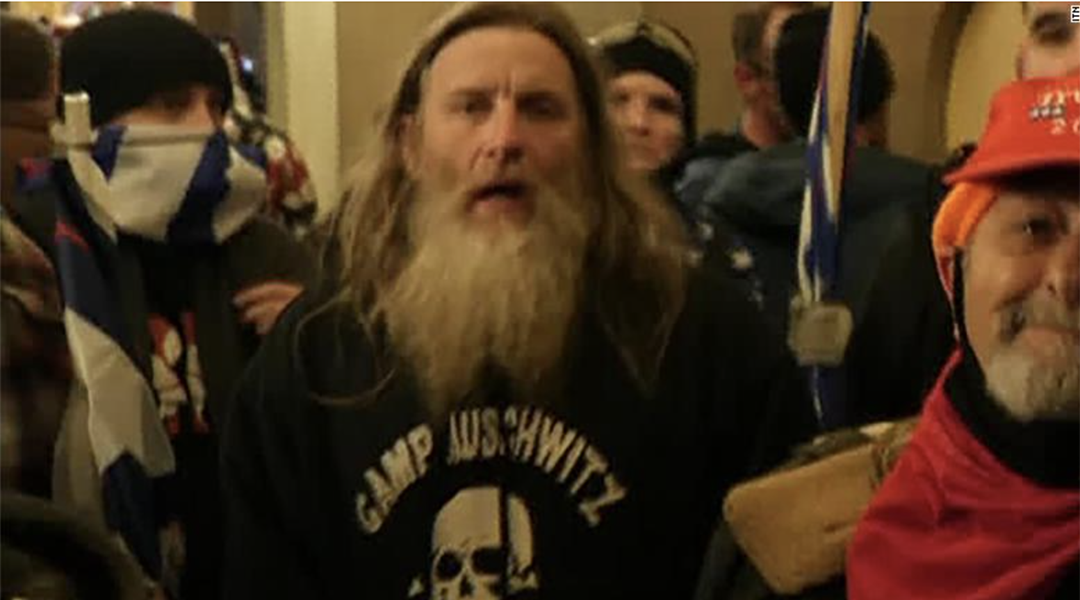 Robert Keith Packer was seen at the Capitol Hill riot and insurrection wearing a hoodie with the words, "Camp Auschwitz" on it. (Screenshot)
Advertisement

WASHINGTON (JTA) — Robert Keith Packer’s sister asked people not to judge him by his cover, a “Camp Auschwitz” sweatshirt. A prosecutor said he was wearing a Nazi SS T-shirt underneath.

The revelation of what Packer, a 57-year-old Virginia pipefitter, was wearing on Jan. 6, 2021, came Thursday when a federal judge sentenced him to 75 days for his role in the deadly riot at the U.S. Capitol spurred by former President Donald Trump’s false claims that he had won reelection.

The sweatshirt, which became a symbol of the rioters’ ties to white supremacist movements, was “incredibly offensive,” U.S. District Judge Carl Nichols said before handing down the sentence.

“It seems to me that he wore that sweatshirt for a reason. We don’t know what the reason was because Mr. Packer hasn’t told us,” Nichols said.

When the FBI asked Packer why he had worn the sweatshirt, he said, “Because I was cold.”

Packer’s lawyers have said he was entitled to free speech and noted that he was not involved in violence. He has pleaded guilty to “parading, demonstrating or picketing in a Capitol building,” an offense that carries a six-month maximum sentence. He will also pay $500 in restitution.

Packer’s sister, Kimberly Rice, had pleaded for leniency, asking the court not “judge a book by its cover,” referring to the Camp Auschwitz sweatshirt.

A prosecutor said at the hearing that Packer did not need to explain why he was wearing the sweatshirt, because what it was covering made it obvious.

“Mr. Packer showed the world who he was on Jan. 6 by both his deeds and his actions,” Assistant U.S. Attorney Mona Furst told the court Thursday. “He posted his belief on his clothing that day.”