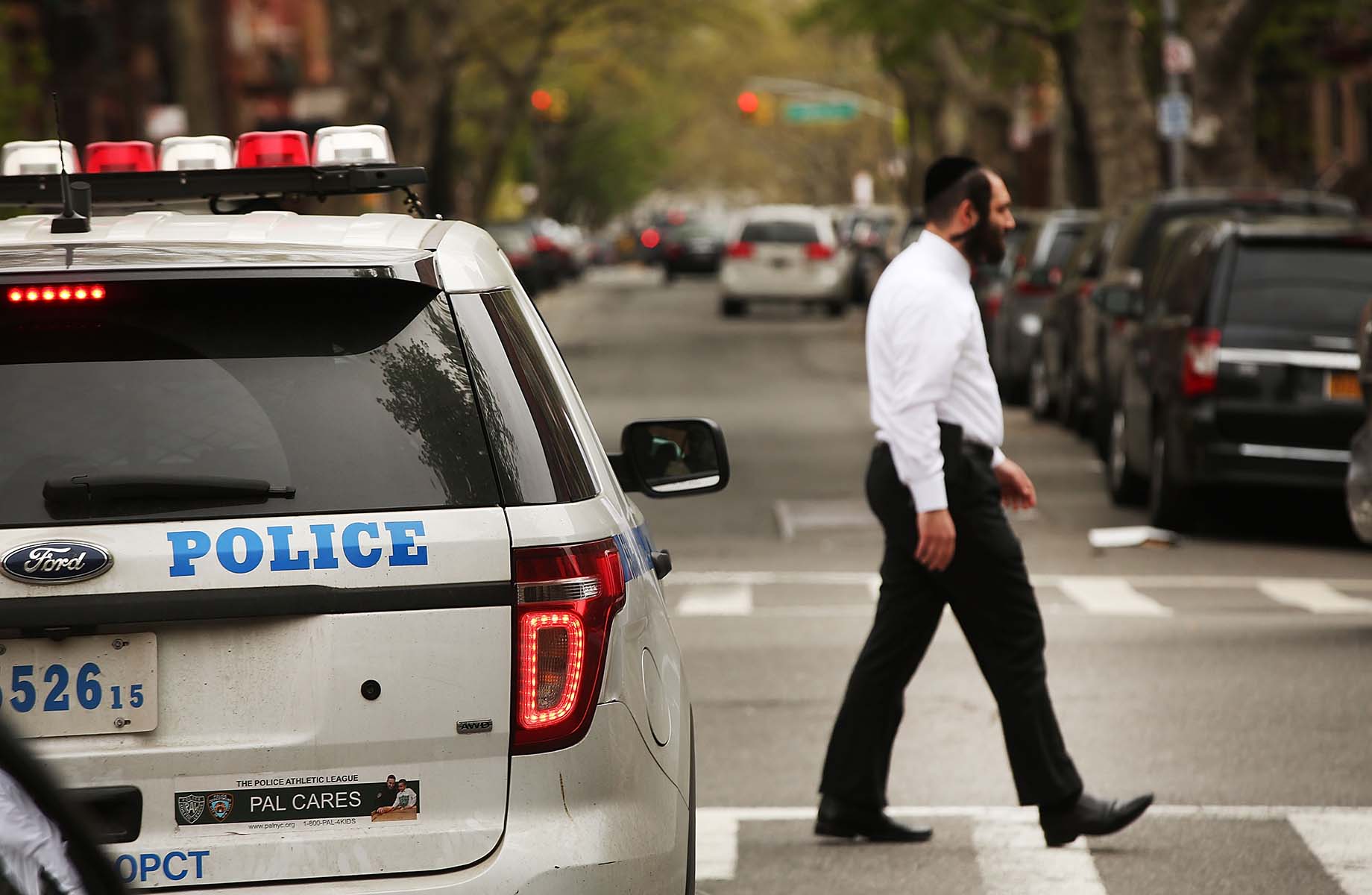 A Hasidic man walks by a police car in a Jewish Orthodox neighborhood in Brooklyn, April 24, 2017. (Spencer Platt/Getty Images)
Advertisement

Called “Understanding Jewish Experiences and Antisemitism,” the initiative from the City’s Commission on Human Rights (CCHR), which enforces New York City’s Human Rights Law, aims to educate New Yorkers about their Jewish neighbors — and therefore decrease hate as a whole across the city. The training initiative received a brief mention in City Hall’s Mayor Management Report which was released on Friday, Sept. 16.

The 500-page report gave updated numbers on an assortment of city agencies and programs, including those addressing crime, pandemic response and education. Among the key findings were that hate crimes had risen by 35%, which the report said was “partly due to an influx of incidents during the ongoing COVID-19 pandemic, and amid heightened racial and political tensions across the country.”

This rise is one of the reasons the new antisemitism training was developed, Jonah Boyarin, a CCHR Jewish community liaison, told the New York Jewish Week.

“Our hope for this training is that everyday New Yorkers can become empowered to understand their Jewish neighbors better and to look out for them, to interrupt antisemitism when they see it in everyday life,” Boyarin said.

He added that another goal is to build cultural competence among New Yorkers interacting, living and working with everyday Jewish New Yorkers, “including Orthodox and non-Orthodox communities.”

“The training is grounded in a human rights lens and addresses antisemitism and its harmful impacts on our society, particularly on Jewish New Yorkers,” the report said about the Jewish-oriented program. It is administered by the Community Relations Bureau (CRB), the educational wing of the CCHR.

Boyarin did not provide specific numbers on individuals who have received the specific training on antisemitism, but said it has been presented to multiple New York City agencies, community-based organizations and houses of worship. According to the latest City Hall report, 107,136 people have received CRB trainings, 4.9% more than 2021. The CCHR held 1,794 conferences, workshops and trainings, an increase of just over 6.5% from 2021.

Boyarin said the trainings will be presented this fall to public school students, though details are “still in the works,” he said.

“It’s a new training, but we’re already seeing high demand for it,” Boyarin said. “We’re glad to see that. We’re here to meet that demand.”

He added that many Jewish organizations were included in the development of the training to make sure all Jewish viewpoints were represented.

A spokesperson from United Jewish Organization of Williamsburg, an organization that advocates for the Satmar Hasidic community in Brooklyn, told the New York Jewish Week the group “reviewed the training and edited parts of it.”

“We strongly feel that it’s important,” the spokesperson said. “It was to help people understand us and our customs.”

A spokesperson from the Jewish Community Relations Council told the New York Jewish Week that they were “consultants on the report” but declined to comment further.

The training, which was developed by the CCHR in conjunction with Staten Island’s Wagner College Holocaust Center, was quietly launched in April 2022, according to a city press release. Mayor Eric Adams said in the press release that the new training “will help us develop a stronger cultural competence and understanding of New York’s diverse Jewish communities.”

The training will be offered by the CCHR upon request.

That desire likely stems from continued attacks on visibly Jewish people in New York City, with a recent spate of reported attacks in Brooklyn, where the majority of Orthodox Jews live. In August, the NYPD announced more patrols in Williamsburg due to the frequency of antisemitic attacks there.

Another day and another disturbing incident in #BoroPark. This despicable incident happened this afternoon but thanks to our volunteers, she was caught and subsequently arrested by @NYPD66Pct. @NYPDHateCrimes pic.twitter.com/kCEfFpqbrb

Over the weekend, yet another video of antisemitism went viral, this time showing a woman accosting an Orthodox man knocking his kippah and shtreimel, a fur cap, off his head. The video was released by the neighborhood watch group Boro Park Shomrim, who added that the woman was arrested.

The video drew a response from elected officials, including Mayor Adams, who said on Twitter on Sunday that “these outrageous attacks on our Jewish community won’t be tolerated, not in our city.”

Gov. Kathy Hochul also shared the video, saying that “acts of antisemitism are abhorrent and unacceptable.”

“I am respectfully asking the Civil Rights Division of the Justice Department to consider investigating New York’s systematic failure to police and prosecute hate crimes and to issue recommendations to reform,” Torres said.

Torres’ letter also referenced a story in the online Jewish magazine Tablet showing that hate crimes committed against Jews in New York City since 2018 rarely result in punishment or conviction.

Boyarin recognized the rise in antisemitism and said the agency’s function is “helping the city be its best self.”

“We hope through this training that New Yorkers will be ever more understanding and respectful of the rich diversity that Jewish New Yorkers, along with all other New Yorkers of all backgrounds, bring to the city,” he said.