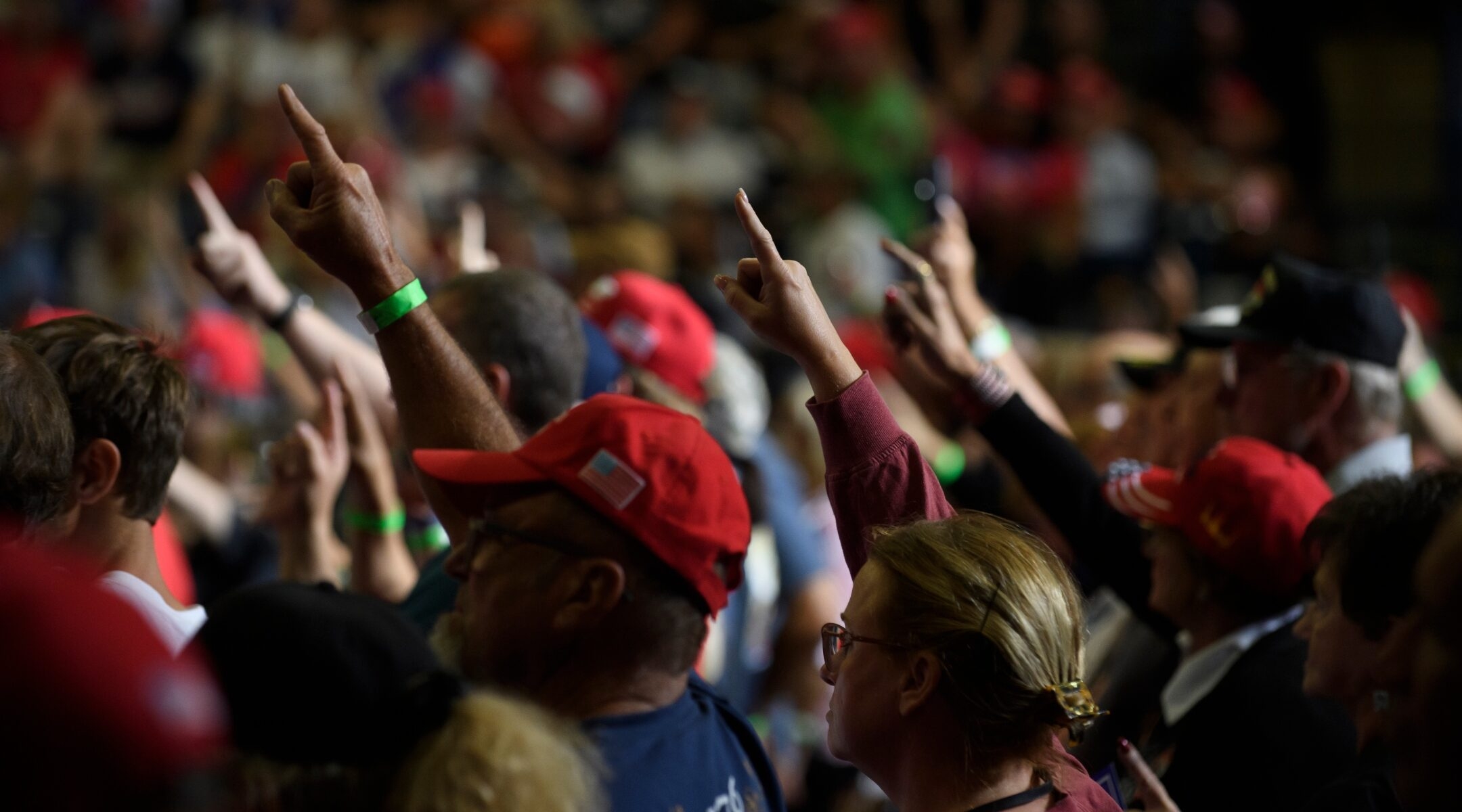 (JTA) — Crowds at separate rallies headlined by former President Donald Trump and his favored nominee for Pennsylvania governor, Doug Mastriano, raised their right hands in unison, creating images that critics of the two politicians compared to the Nazi salute.

“Last night at a rally held by the former President, and today at a political rally held by a candidate for Governor of Pennsylvania, supporters were urged to hold up their right hands in a unified salute that should shock the conscience of every American for its remarkable similarity to the ‘Heil Hitler’ salute used by the Nazis,” Kaplan wrote. “I call on these campaigns to immediately end the use of this shocking salute in their rallies.”

A speaker at a Mastriano rally on Sunday in Chambersburg, Pennsylvania, asked the crowd to raise their right hands as he likened Mastriano’s gubernatorial bid to a bloody Civil War battle in nearby Gettysburg.

“Can you say what they said at Gettysburg when you see us lined up, as one! Sweep down the hill to victory,” the speaker said. The crowd raised their arms and the speaker counted down from three; on the count of “one,” the crowd brought their hands down at the same time and cried out “AS ONE!”

The Lincoln Project, an organization of former Republicans who oppose Trump, posted a video on Monday intercutting the Chambersburg rally with footage of Nazi rallies featuring the “Sieg Heil” salute.

Mastriano has drawn criticism, including from some Republicans, for his associations with the far-right social media platform Gab, which is known as a haven for white nationalist, antisemitic and other extremist content.

Trump spoke rally on Saturday in Youngstown, Ohio, where the former president was campaigning for Senate hopeful J.D. Vance. As Trump listed what he said were catastrophes besetting America, rallygoers raised their right arms and index fingers in a salute as a song almost identical to one identified with the QAnon conspiracy theory movement played, The New York Times reported. The index finger could have been a reference to the numeral 1 in name of the song, “Wwg1wga” — an abbreviation of the QAnon phrase “Where we go one, we go all.”

The QAnon movement has, among other things, accused Democrats and other liberal figures of pedophilia and power-grabbing, while incorporating some antisemitic conspiracy theories into its worldview.. The Trump campaign denied any connection.

New York Magazine compiled analysis that suggested the salute could have other origins, including other groups on the far right, or evangelical Christians.

Prominent commentators compared the salutes at both rallies to the infamous Nazi gesture.

The display bore an uncanny resemblance to the infamous Nazi salute. The incitement and zombie-like response should put to rest the notion that Biden should be “reaching out” to these people. They are unreachable, and pretending otherwise misleads voters. https://t.co/jf5pnPpn20

Yes, this is a Nazi salute, at a Doug Mastriano campaign event in Pennsylvania. In 2022.

Democracy is literally on the ballot in November.