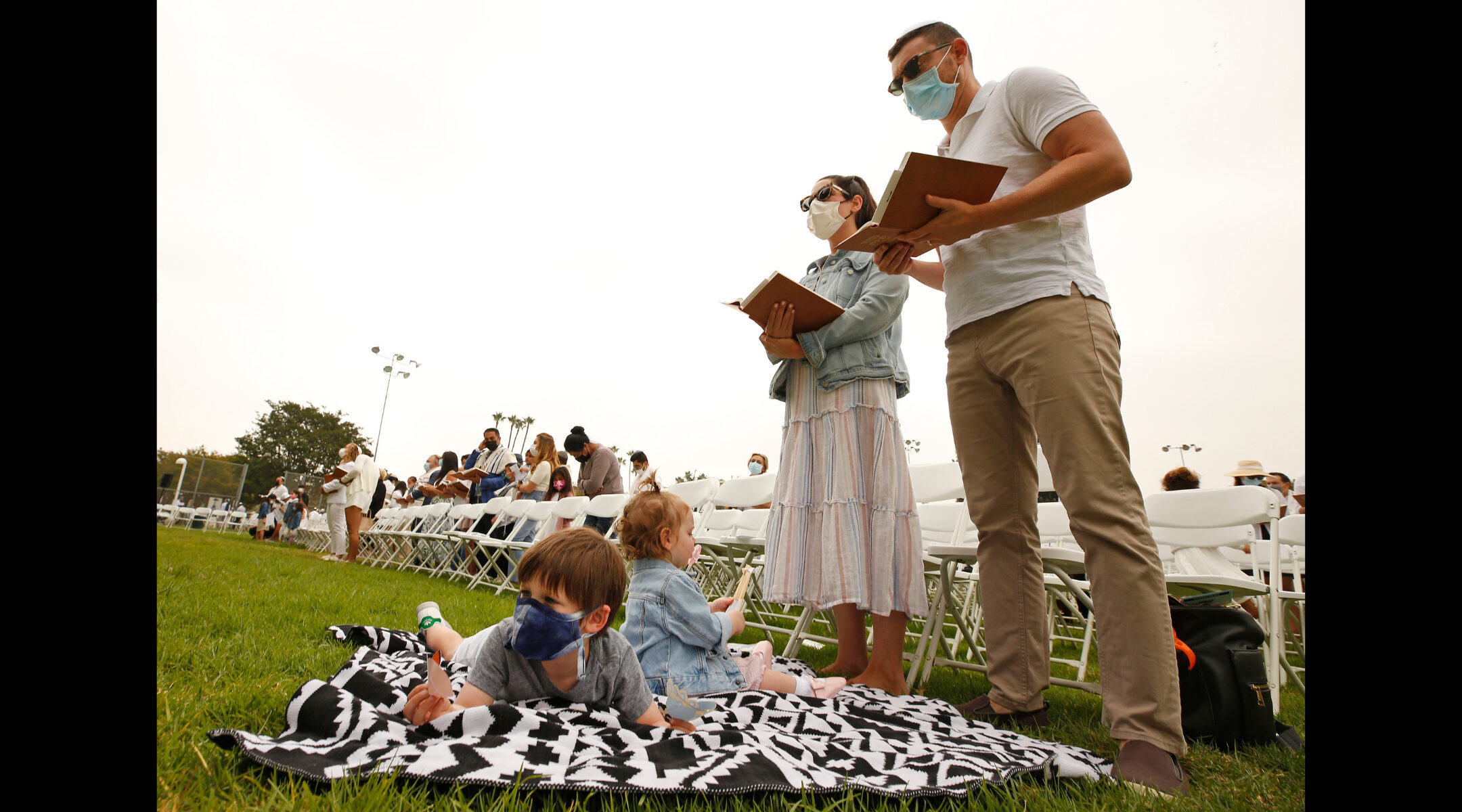 (JTA) — The kids are coming back inside for Rosh Hashanah services at Temple Shir Shalom, a Reform synagogue in suburban Detroit.

Last year, in a concession to COVID-19, the congregation held its family services on a football field. This year, the services will take place inside Shir Shalom’s West Bloomfield, Michigan building, where other changes are happening, too. Masks are recommended but no longer required, and a vaunted dessert reception is returning for the first time since 2019.

Two miles down Walnut Lake Road at Temple Israel, a slate of services has been tailored to give options to congregants depending on how much COVID risk they’re comfortable taking on. A masks-optional service on the first day of Rosh Hashanah will take place only after a first, otherwise identical service where masks are required. Later, a third service will take place outdoors, for families and people who aren’t comfortable with indoor events.

The range of options on one stretch of road in a single suburb in Michigan underscores the state of play at synagogues across the United States on the eve of the third High Holidays of the COVID-19 pandemic. As in other parts of civic life, predictable guidelines have given way to a patchwork of approaches. At the same time, pre-pandemic practices have largely returned, reflecting an acceptance of COVID-19 as here to stay that is widespread, though certainly not universal.

Until this summer, Congregation Beth Sholom in Teaneck, New Jersey, had barely held Shabbat services indoors since before March 2020, opting instead to hold services almost exclusively outside. (It also ended its Shabbat livestream in March 2022, citing Jewish law concerns.) Now, it will hold Rosh Hashanah services both in its massive auditorium and in its parking lot. Children’s services and programming will be held indoors, with air purifiers.

“Certainly the feeling is that we are another step closer to a more normative, let’s say, High Holiday experience,” Beth Sholom’s rabbi, Joel Pitkowsky, who will lead the outdoor service, told the Jewish Telegraphic Agency.

But what is normal? More than two years into the pandemic, there is little consensus anymore about what adjustments communities should make, if any, to accommodate the still-spreading but less deadly virus. Instead, each community is making its own call, taking into account local case rates, community members’ risk tolerance, the availability of resources and Jewish law.

The result: Some synagogues are requiring attendees to show proof of vaccination while others have dropped that requirement. Some are requiring masks for indoor worshippers, while others are recommending them or just leaving the choice of whether to wear a mask up to individuals. Some are holding services partly or fully outside to reduce risk, while others say everything is back inside this year.

In all cases, plan Bs are getting made — what if a rabbi tests positive before the holiday starts, or cases tick up after Rosh Hashanah?

“The hardest thing about planning is that the ground keeps shifting,” said Melissa Balaban, the CEO of IKAR, a “post-denominational” congregation in Los Angeles. “Every event we plan now, there’s the event and then the three contingencies.”

In 2020, when one of IKAR’s rabbis tested positive, she was able to Zoom in from home to give a sermon. That won’t be possible this year, as services are taking place in person, with streaming to viewers at home. But the synagogue has options: In the case that one of the rabbis or the cantor at IKAR tests positive, the other three members of the prayer leadership should be available.

IKAR is keeping some of the changes it made because of COVID-19. Last year, the congregation offered an outdoor Neilah, the last part of the Yom Kippur service, as the sun went down.

“Being outside was really extraordinary,” Balaban said. “So I’m very excited that we’re able to do that again.”

Many synagogues do not have the luxury of a deep bench of rabbis and others who can lead the complicated, lengthy prayers for Rosh Hashanah and Yom Kippur. Some rabbis have opted to reduce their personal risk in the days leading up to the holidays to lessen the possibility of having to stay home.

But others say they’re relatively unconcerned, in part because the endurance of streaming and Zoom services means they can join from home if needed. “That’s not one of the nightmare scenarios that keeps me up at night,” said Rabbi Michael Farbman of Temple Emanuel in New Haven, Connecticut, about testing positive for COVID-19 before the holiday.

Farbman is much more worried about incidents like the one that took place last year when he was streaming services from inside Temple Emanuel, a Reform synagogue, to congregants at home. During the last 15 minutes of the Yom Kippur morning service, with more than 160 people signed in, the live stream crashed from the synagogue’s end, and the service leaders in the sanctuary disappeared from the congregants’ screens.

They soon realized what had happened: A technician had accidentally cut the synagogue’s Internet connection while replacing a cable along the street. Farbman had to log into the Zoom from his phone and run between the cantors to finish up the service.

“We don’t actually have the ability to plan for everything,” Farbman said. “I’m kind of hoping that of all the things that can go whichever way this year, at least we’re not going to suddenly just disappear from the service.”

Non-Orthodox synagogues such as Farbman’s have used streaming and Zoom meetings since the beginning of the pandemic to engage congregants at home. (Two years ago, when Rosh Hashanah followed Shabbat and required streaming for longer than Zoom allowed, a Zoom employee even created a synagogue-friendly three-day streaming option.) But Orthodox synagogues have never permitted the use of electronics on Shabbat, and most moved away from major concessions to the pandemic some time ago.

The Jewish Center, a Modern Orthodox congregation on Manhattan’s Upper West Side, polled members last month on whether to offer a rooftop service, which it had offered for the past two years. Not enough people asked for the outdoor option to offer it, according to Rabbi Yosie Levine.

Instead, the synagogue is placing a mechitza, or partition used to separate men and women in Orthodox congregations, in what is usually the women’s balcony and requiring masks there, creating a space for both men and women who want to take precautions against COVID-19.

“On the one hand, we want to be as accommodating as we can be so that people who have more of a COVID-cautious streak feel comfortable participating in our services,” Levine said.  “And at the same time, we’re trying to kind of get back to normal. And sometimes, those two things are in conflict.”

As the new normal sets in, communities and their rabbis are still grappling with how to make sense of the pandemic, and the changes to Jewish communal life and worship that have been wrought as a result.

“We are not the same people we were two and a half years ago,” Pitkowsky said, adding that figuring out “how to provide a religiously inspiring setting for that new version of ourselves is a challenge.”

For now, though, there’s a set of holidays to get through and communities to reconvene.

“People have been craving opportunities to gather together,” said Rabbi Daniel Schwartz of Temple Shir Shalom, back in West Bloomfield. “Just being able to see people face-to-face again and continuing to build those relationships has been wonderful.”