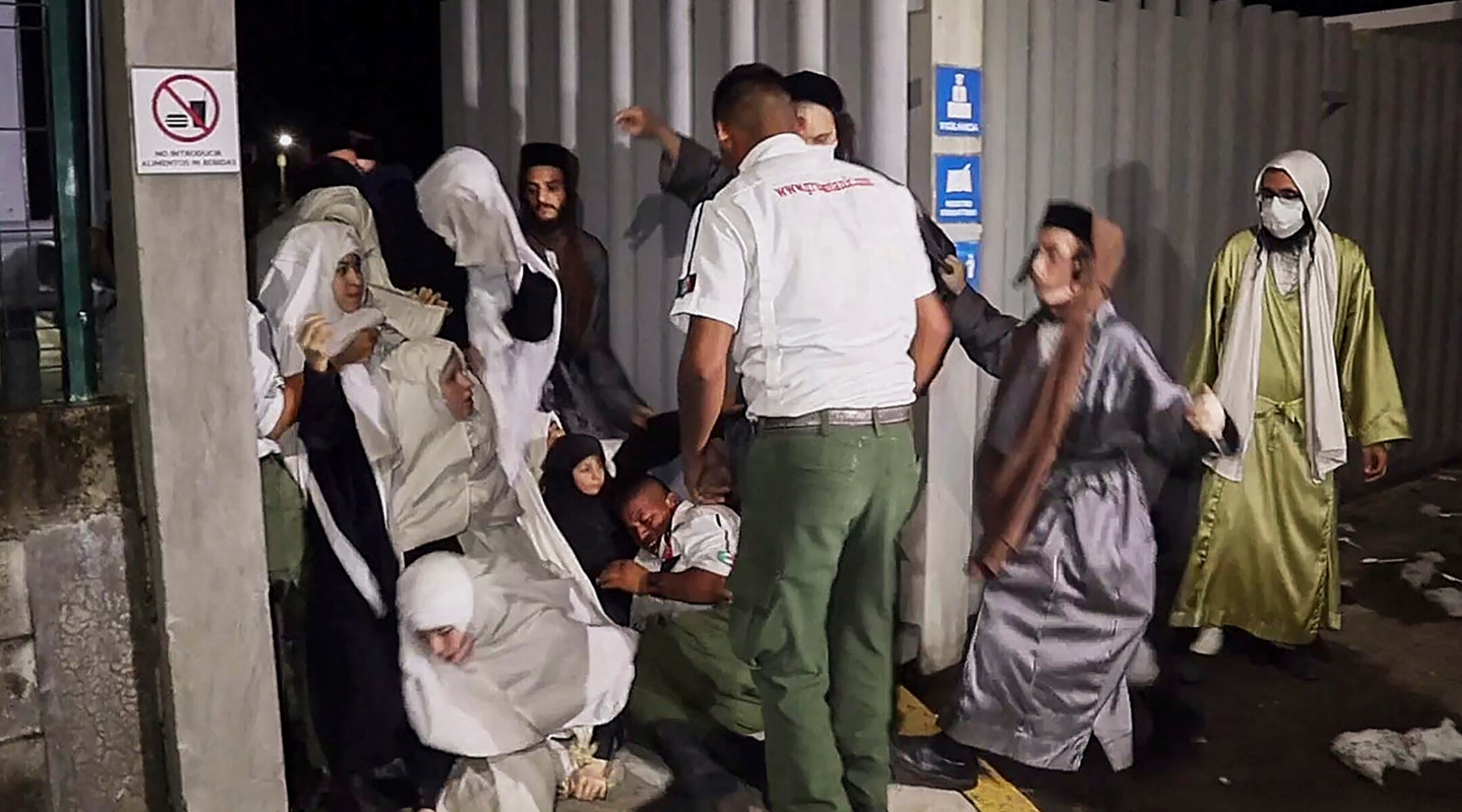 This grab from an AFP video shows members of the Jewish Lev Tahor sect trying to escape from a detention shelter in Huixtla, Mexico, Sept. 29, 2022. (Benjamin Alfaro/AFP via Getty Images)
Advertisement

(JTA) — As the Jewish new year was coming to a close Tuesday afternoon, Mexican Authorities raided a compound on the outskirts of Tapachula, a city on Mexico’s pacific coast about six miles from the Guatemalan border.

There they arrested 26 members of the Lev Tahor Hasidic sect, which has widely been considered a cult around the world.

The members, including a leader, Menachem Endel Alter, were arrested on charges of being part of a criminal organization, along with human trafficking, the Associated Press reported.

The group, whose name means “pure heart” in Hebrew, was founded in 1988 by an Israeli rabbi, Shlomo Helbrans. They follow an extreme interpretation of Hasidic Judaism, requiring women to be covered from head to toe. They also eat a diet of mostly fruits and vegetables, considering almost everything else not sufficiently kosher, and they eschew all Jewish texts beyond the Torah and Helbrans’ own books. According to one former member of the group, Helbrans and later his son Nachman held almost complete control over the lives of its 300 or so members.

By 1990, Helbrans and his followers had relocated to Williamsburg, Brooklyn. There, Helbrans served prison time for abducting a boy who had been sent to study with him as a bar mitzvah student. After their troubles in New York, they relocated to Canada. But in 2014, after allegations of child abuse and neglect, most of the group fled to Mexico and Guatemala.

Helbrans reportedly died in Mexico in 2017, drowning in a river he was using as a mikvah for ritual immersion, leaving the group in the hands of his son Nachman.

Tuesday’s arrests weren’t the first run-in they had with Mexican authorities. In 2018, Nachman Helbrans and his right-hand man Meyer Rosner were arrested in Mexico and extradited to the United States, where they were convicted by a U.S. court in November for a scheme in which they tried to force a 14-year-old girl into a sexual relationship with a 19-year-old as part of an arranged marriage.

Since then, several Lev Tahor leader’s have been bouncing around the world, touching down in Bosnia, Macedonia, Iraqi Kurdistan and even Iran, trying to find a more amenable home for their community.

During the raid, women and children connected to the group were removed from the compound and taken to a shelter, Mexican authorities told the AP.

However, as many of Lev Tahor’s members, such as Alter, are Israeli citizens, the raid was conducted with the cooperation of Israel’s consulate in Mexico, The Times of Israel reported.

Working alongside Mexican police was an ex-Mossad member, Danny Limor.

“The cult members of course did not agree to be arrested and protested this,” he told the Israeli news outlet Ynet. “They did not receive us happily.”

Also on hand during the raid was Israeli consul, Lior Batzov, to make sure that the members were not treated violently. Family members of Lev Tahor’s adherents, such as Israel Amir, who escaped the community years earlier, had urged Israeli authorities to take action, arguing that many members, especially minors, were there against their will.

“Another important goal was to rescue as many children as possible, belonging to families who managed to escape the cult and asked us for help,” Amir said.

His three-year-old son, who had remained with the community, was among those taken by police during the raid, and the two were reunited.

“We’ve been following the cult ever since we identified its location in Guatemala,” Limor added. “We’ve managed to build a case against the cult in recent months, while cooperating with Mexican authorities. This led to the eventual raid to arrest some of the cult’s senior members.”

However, he stressed that Lev Tahor communities still existed in Guatemala and Mexico.

“This isn’t over. There’s another branch of this cult in Guatemala, as well as in other places. But the cult’s members now lack leadership,” Limor said.