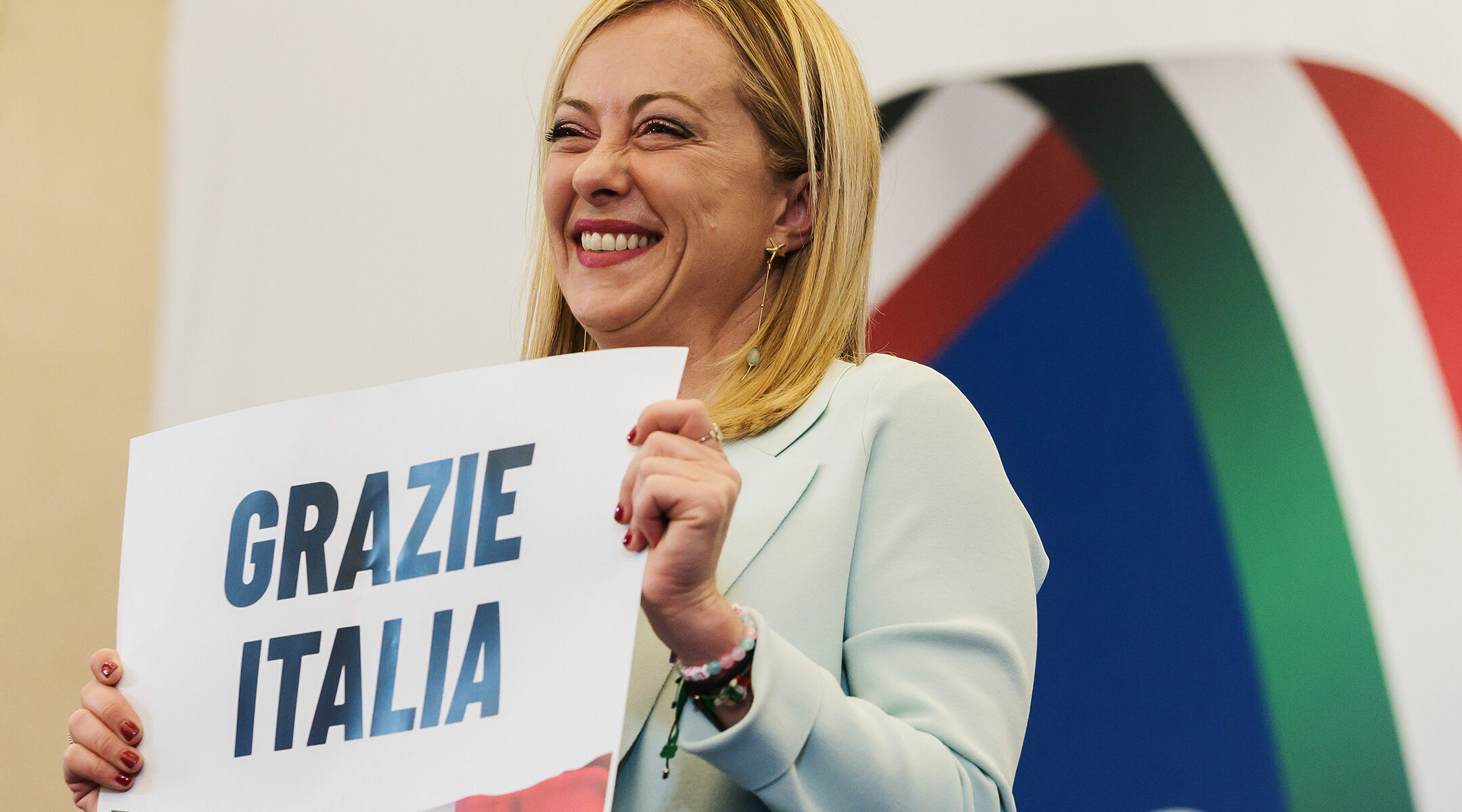 (JTA) — The success of Giorgia Meloni’s Brothers of Italy party in Italy’s national election last week means the country is poised to have its most right-wing government since World War II, when Italy was Hitler’s staunchest ally in Europe.

The prospect has unnerved many Italian Jews, even as several of their leaders appear to be taking a wait-and-see approach to Meloni’s leadership, refraining from making public statements about the results.

“Faced with the prospect of a prime minister that is affiliated with a party that ideologically is the heir of the Italian Social Movement, a good part of Italian Jews are concerned,” David Fiorentini, president of Italy’s Jewish Youth group, told the Jewish Telegraphic Agency.

Meloni’s first stop in politics was in the youth movement of the Italian Social Movement, known as MSI, a neofascist party founded in 1946 by people who had worked with Hitler and Benito Mussolini, Italy’s fascist leader from 1922 to 1943. Brothers of Italy is closely tied to the group, even housing its office in the same building where MSI operated and using an identical logo, a tricolor flame.

Fiorentini also cited as causes for concern “the party’s bombastic tones,” “unfortunate episodes at the local level” and the revelations last year that party leaders were closely tied to a convicted fascist and his followers.

“As long as the party does not distance itself from these factors, it is only natural that many Jews don’t feel represented,” Fiorentini said.

The party does boast some Jewish supporters and members. One of the party’s newly elected members of parliament, Ester Mieli, is a former spokesperson for the Jewish community of Rome and the granddaughter of a Holocaust survivor, with whom she co-wrote a book about his survival in Auschwitz. Mieli said that “each candidate represents themselves and not the community to which they belong.”

Meloni’s sharp rise — her party got 26% of the vote, compared to 4% four years ago — reflects the rightward shift across much of Europe as more populist, right-wing parties have gained popularity in recent years. Poland’s Law and Justice party and Hungary’s Hungarian Civic Alliance have been notable examples, and in Sweden, too, a far-right party looks poised to lead a government coalition after its strong performance in this month’s election.

In part by tamping down some of the extremist rhetoric from within the party, Brothers of Italy was able to persuade more moderate right-wing parties to enter a coalition with it. Together with the right-wing coalition, Meloni received almost 44% of the overall vote, enough to form a government, which she is likely to lead as Italy’s first-ever female prime minister.

The Brothers of Italy, whose motto is “God, homeland, family,” espouses firmly conservative, anti-immigration and Eurosceptic views. Meloni’s rallying cry during the electoral campaign became a quote from a speech, in which she declared “I’m a woman, I’m a mother, I’m a Christian.” Her party opposes same-sex marriage and adoptions, abortion, euthanasia and the legalization of cannabis. However, unlike some of her ideological counterparts in other countries, Meloni has come out in support of Ukraine and NATO during the ongoing Russian invasion.

On the campaign trail, Meloni’s opponents portrayed her party as fascist, hoping the movement’s roots would discourage some Italians from supporting it. In 2014, one of the party’s newly elected members of parliament published a Facebook post praising Adolf Hitler as a “great statesman.” After the Italian press unearthed the post this week, Meloni’s party distanced itself from the candidate, but it was already too late to remove him from their list.

Stefano Jesurum, author and former board member of the Jewish community of Milan, said some Italian Jews are willing to overlook the fact that far-right leaders are “intrinsically fascist,” focusing on their parties’ championing of Israel.

“To these voters, the important thing is that the [far-right parties] say that they are unconditionally aligned with Israel,” Jesurum said.

Meloni visited Yad Vashem, Israel’s Holocaust memorial and museum, in 2009, when she served as youth minister in Silvio Berlusconi’s last government. She cited the visit as “a conscience-shaking experience” in a recent interview with Israel Hayom, an Israeli newspaper.

Meloni says she is fully committed to Israel’s security. “Israel represents the only fully-fledged democracy in the broader Middle East, and we defend without any reservations its right to exist and live in security,” she told Israel Hayom. “I believe that the existence of the State of Israel is vital, and Fratelli d’Italia will make every effort to invest in greater cooperation between our countries.”

But Meloni has not always portrayed herself as a staunch supporter of Israel. In 2014, she praised Hezbollah, the militant group based in Lebanon that frequently attacks Israel, for defending Christians there. She also lamented “another massacre of children in Gaza” that year on social media, an apparent criticism of Israel though she did not mention the country by name.

Only after the installation of the new parliament in mid-October, and after both chambers elect their respective presidents, is Meloni likely to be appointed by Italy’s president to form a new government and appoint its ministers.

So did Noemi di Segni, president of the Union of Italian Jewish Communities. She instead referred JTA to her official Rosh Hashanah message, published on Sunday before the election.

In that message, she offered a plea to the victors of the looming election.

“We ask [our elected leaders] to address the issue of hatred and antisemitism in a united manner. You don’t pick a piece of ‘Jewish hatred’ or ‘Israeli hatred’ and defend it with a flag of political prowess,” Di Segni wrote.

She added a warning that could be seen as applying to both Meloni and the Italian Jews di Segni represents. The number of Italian Jews is estimated to be around 24,000, the majority of whom are concentrated in the communities of Rome and Milan.

“The memory of the Shoah, the responsibilities of Fascism, and the existence of Israel as a light among the nations are one and the same; they are not isolated issues that can be discussed as if the rest were superfluous or could be denied,” Di Segni wrote. “If our values are neglected due to a lack of interest or to benefit the individual’s interests or the interests of a specific party, the risk is really high. It will not be enough to say ‘let’s see’ and ‘let’s hope.’”