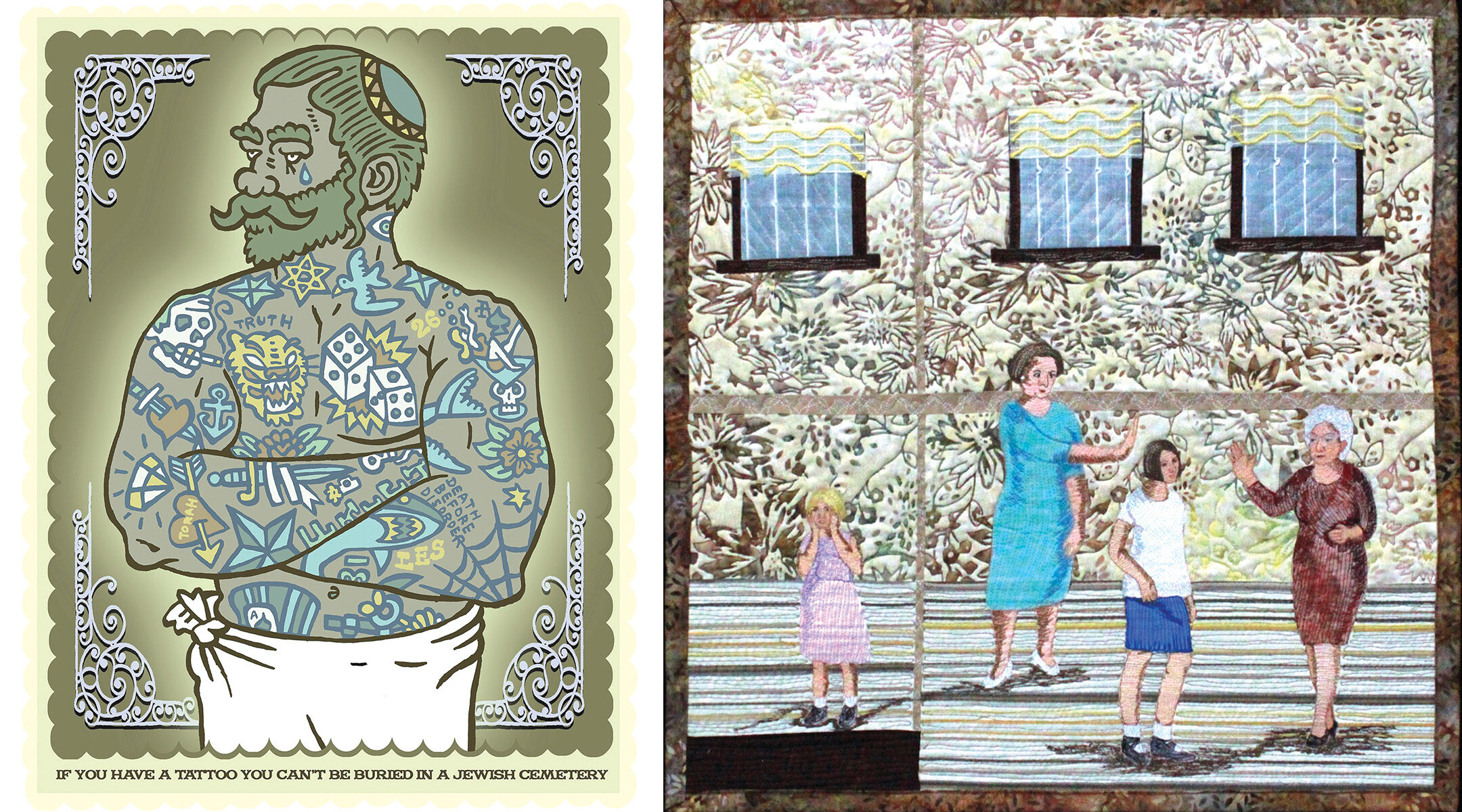 Steve Marcus' "Consequences," left, and Maxine Hess' "The Slap," are two of the 50-plus artworks on view at the current exhibit at the Dr. Bernard Heller Museum at Hebrew Union College-Jewish Institute of Religion. (Courtesy of the artists)
Advertisement

(New York Jewish Week) — If you take the Torah’s word for it — not to mention generations of rabbinical literature — astrology, witchcraft, ghost-busting and the like are expressly forbidden in Judaism, and have no place in Jewish practice or culture.

And yet, as the current exhibit at the Dr. Bernard Heller Museum at Hebrew Union College-Jewish Institute of Religion highlights, the occult has always been an integral part of Judaism — and continues to be today.

“In every civilization there’s evidence of belief in superstition, mystical characters that can both protect and harm or rituals that can ward off evil,” Jeanie Rosensaft, the museum’s director, told the New York Jewish Week. “It’s just a fascinating thing, and we wanted to investigate.”

For the exhibit “Magical Thinking: Superstitions and Other Persistent Notions,” Rosensaft and her curatorial team put out an open call to hundreds of contemporary Jewish artists for artwork exploring Jewish superstitions. The result showcases the work of more than 50 artists in a range of mediums — including oils, watercolors, acrylics, collage, paper cuts, multimedia and photographs.

From hamsas to “the menstrual slap,” the artworks grapple intimately with Jewish practices that have been both painstakingly preserved across the generations and, at the same time, discounted as merely “old wives’ tales.”

Taken as a whole, however, the aesthetic diversity of the pieces reflect the complicated reality of Jewish tradition: encompassing many varying and sometimes opposing perspectives that nonetheless remain in conversation.

Inspired by the exhibit, which is on view through Jan. 5, 2023, the New York Jewish Week chatted with Rosensaft, participating artists and other scholars in the field of Jewish material culture and demonology about the place of the occult in Jewish culture, both past and present. They helped us debunk five critical misconceptions.

1. The occult has no place in Judaism.

One of Rosensaft’s favorite quotes from the 13th-century Sefer Chasidim — an ethical and legal guide to Jewish daily life in medieval Germany — perhaps best encapsulates Judaism’s true approach to the occult: “One should not believe in superstitions, but still it is best to be heedful of them.”

In other words, just because the Torah prohibits belief and participation in the occult, that doesn’t mean that you should look a gift golem in the mouth.

According to Sara Ronis, author of the recent book “Demons in the Details: Demonic Discourse and Rabbinic Law in Late Antique Babylonia,” the supernatural has actually long been a meaningful and powerful element of Jewish life. “Many Ashkenazi Jews today have an understanding of Judaism as highly rational, scientific and spiritual more than material,” she told the New York Jewish Week. “That understanding emerges out of particular conditions of 19th-century western Europe, and is an important part of Jewish history. But it’s not the only part.”

“[Even] the rabbis of the Talmud recognized that the world was filled with phenomena beyond their understanding,” she added, “and demons and other intermediary beings play important roles in rabbinic narrative and law.”

The truth is, from the first mention of the demon Lilith in the Book of Isaiah to the red strings sold at the Western Wall today — presumably to ward off ayin hara, or the evil eye — the occult has a long history in Judaism. 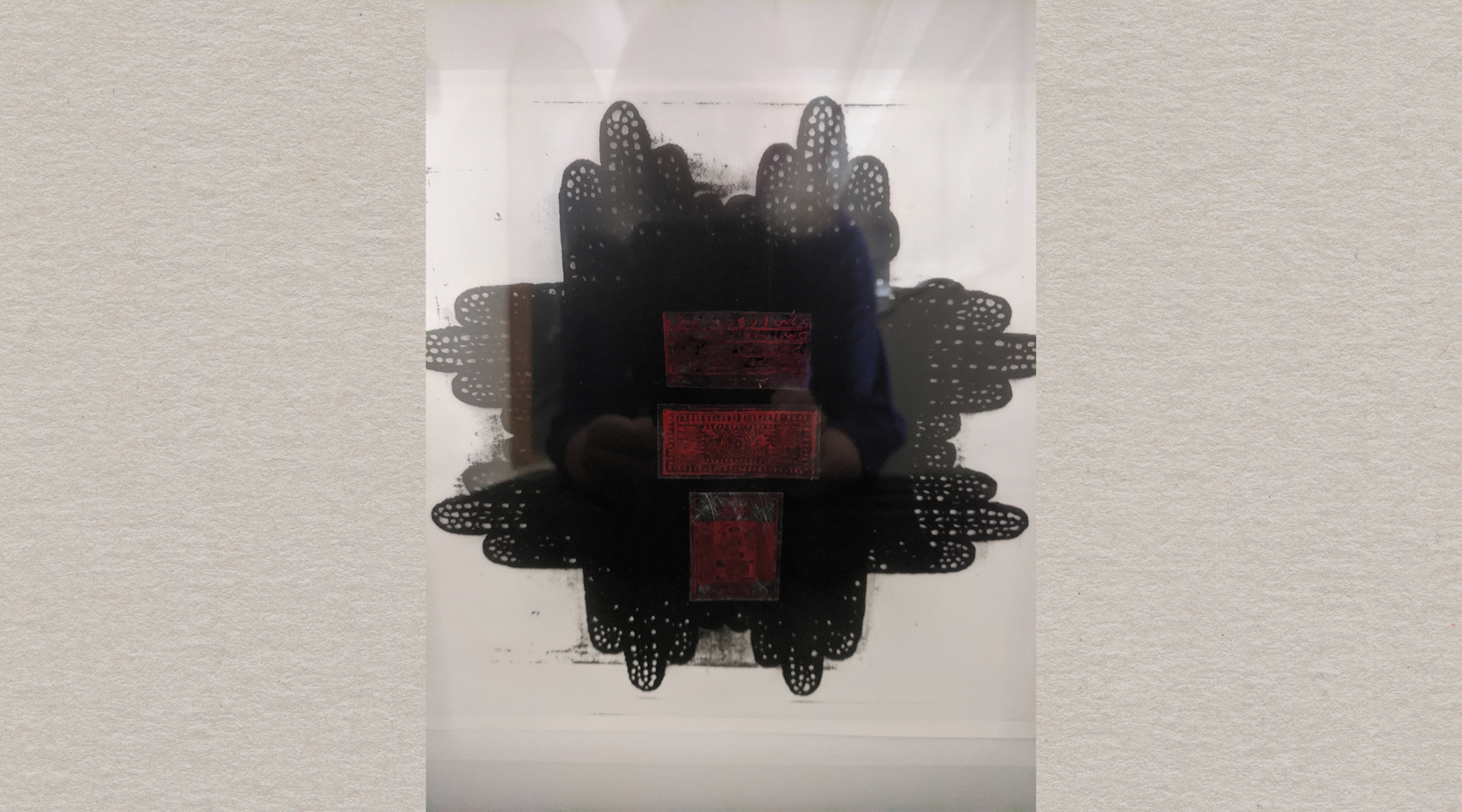 Claire Jeanine Satin’s mixed-media work, “Hamsa,” is one of many on view at the exhibit “Magical Thinking: Superstitions and Other Persistent Notions.” (Courtesy of the artist)

PSA: Old wives’ tales — bubba meises, as they are known in Yiddish — are a derogatory term for the carefully preserved and transmitted traditions and material culture of Jewish women (you know, half of all Jews).

These customs and traditions — preserved and transmitted from one generation to the next over the course of centuries — are actually very significant. From this perspective, a hand-shaped hamsa amulet could hold the same religious significance as a kiddush cup or prayer book.

According to Noam Sienna, author of “A Rainbow Thread: An Anthology of Queer Jewish Texts From the First Century to 1969,” “reading” objects (aka examining Jewish material culture) in addition to Jewish texts is crucial to painting an inclusive image of Jewish tradition.

“Reading objects is a way of giving voice to subjects perhaps otherwise denied the ability to speak through the textual tradition — women, artisans, farmers, practitioners of folk magic — and making room for experiences and perspectives not expressed by the literary record,” he said.

The hamsa, as well as other amulets and incantation bowls, are also deeply tied to that textual tradition: “For a Maghrebi [North African] Jewish viewer, the hamsa hand conjures up a dense web of Biblical and rabbinic associations all centering around the twin concepts of protection and blessing — warding off bad energy and attracting good energy,” Sienna said.

3. If you have a tattoo, you can’t be buried in a Jewish cemetery.

While many are quick to dismiss the role of superstition in Jewish practice and tradition, the opposite can also occur: Sometimes a superstition becomes so embedded in Jewish culture and imagination that it’s mistaken for fact.

When illustrator Steve Marcus received the exhibit prompt, he immediately thought of the widespread belief that tattooed Jews could not be buried in a Jewish cemetery. That’s what inspired his piece in the exhibition, “Consequences,” which depicts a heavily tattooed man in a kippah, crying.

The truth is, while the Torah does include a proscription against tattoos (Leviticus 19:28 states: “You shall not make gashes in your flesh for the dead, or incise any marks on yourselves: I am the LORD”), it does not actually prevent Jews from being buried with their community.

“The misconceptions I wanted to convey in this piece are beyond superstition,” Marcus told the New York Jewish Week. “No matter what kind of Jew one is and what choices they have made, they are Jewish. They are Jewish regardless of race, whether they’re kosher or shomer Shabbat or if they are tattooed or not.” 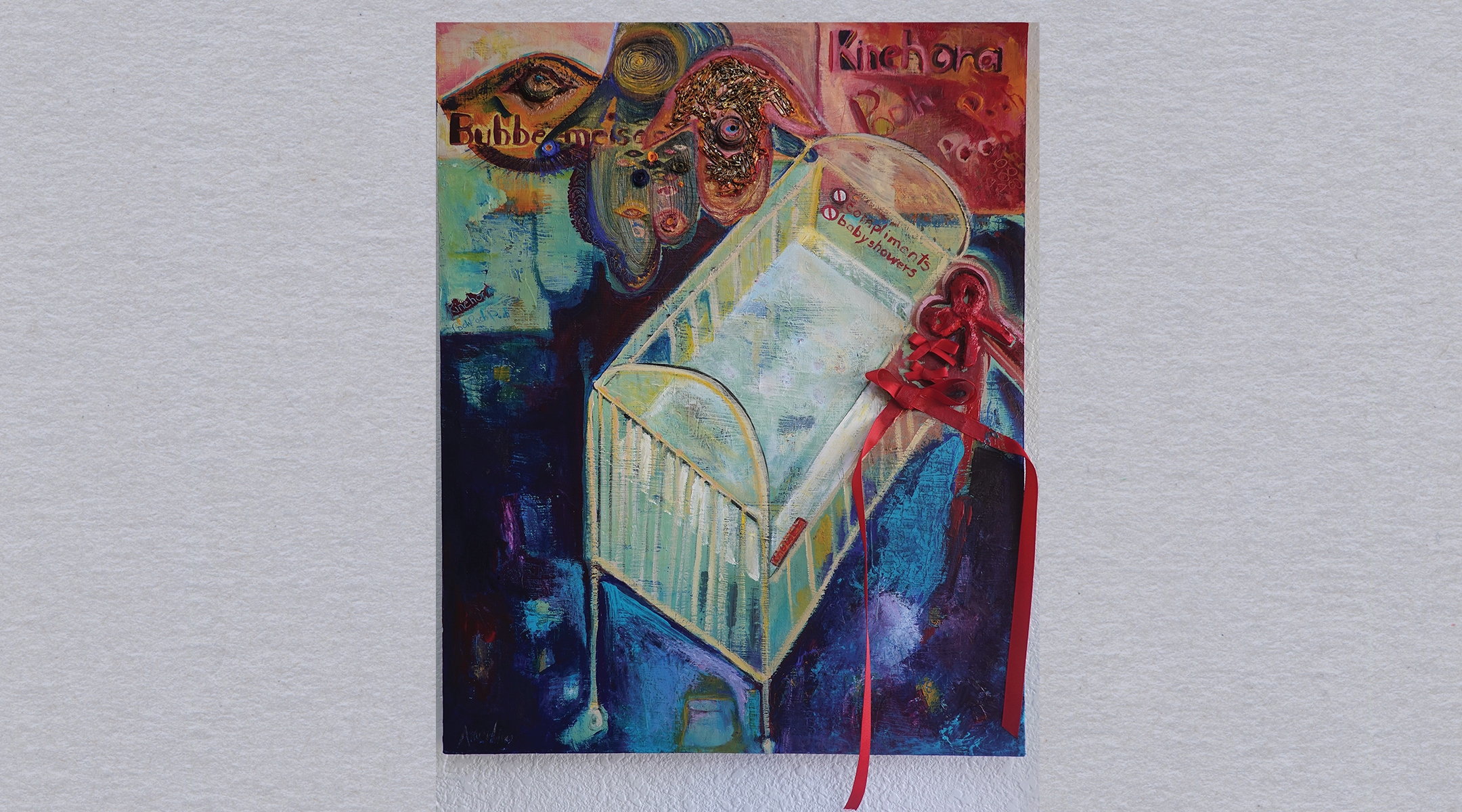 Deborah Ugoritz’s “Bubba Meises” is one of the many works on view as part of “Magical Thinking: Superstitions and Other Persistent Notions.” (Courtesy of the artist)

Deborah Ugoritz’s collage “Bubba Meises” combines the traditional elements of a Jewish birth amulet (intended to protect a mother and her newborn from the demon Lilith, who might take the child away), but also adjusts the tradition to a contemporary setting.

“Ugoritz celebrates the role of women as artists and activists and includes the name of Ruth Bader Ginsberg, calling upon her as a kind of protective force for our present, for our future,” said Rosensaft.

While Ugoritz said she doesn’t believe in these Jewish superstitions, she does believe in their transmission — she didn’t have a baby shower either. “I am not religious,” she said. “I don’t believe in superstition, but it can’t hurt. I feel like I’m honoring my parents so I continue the traditions.”

5. This exhibit caused the COVID-19 pandemic.

Rosensaft was working on the catalog for “Magical Thinking: Superstitions and Other Persistent Notions,” when the pandemic hit. Originally set to open in May 2020, the museum postponed the show because of COVID-19 until fall of 2022 — next in line after an exhibit honoring the 50th anniversary of female rabbinical ordination.

Which sort of makes us wonder: Just like the infamous hoard of mummies excavated in Saqqara in 2020 had some wondering if the curse of the Pharaohs had something to do with the COVID-19 pandemic, did this exhibit accidentally attract the evil eye?

Rosensaft argued that perhaps the opposite is true: the pandemic has actually  reignited our relationship with the occult. “I think that the experience with COVID has made it clear to us that there are limits to human understanding,” she said. “Human beings want to find meaning or solutions, or remedies for the things that are literally plaguing us. And I do believe there is this undercurrent of superstition, a belief in magical thinking. Humanity longs for a sense of protection and safety.”

That “Magical Thinking” ended up perfectly aligned with this societal sentiment — not to mention the current season to be spooky — was just a lucky coincidence.

“Magical Thinking: Superstitions and Other Persistent Notions,” is on view at the Dr. Bernard Heller Museum at Hebrew Union College-Jewish Institute of Religion, 1 West 4th St., through Jan. 5, 2023.