Cora Wilburn, an early American Jewish novelist, gets a bridge named for her in her Mass. town 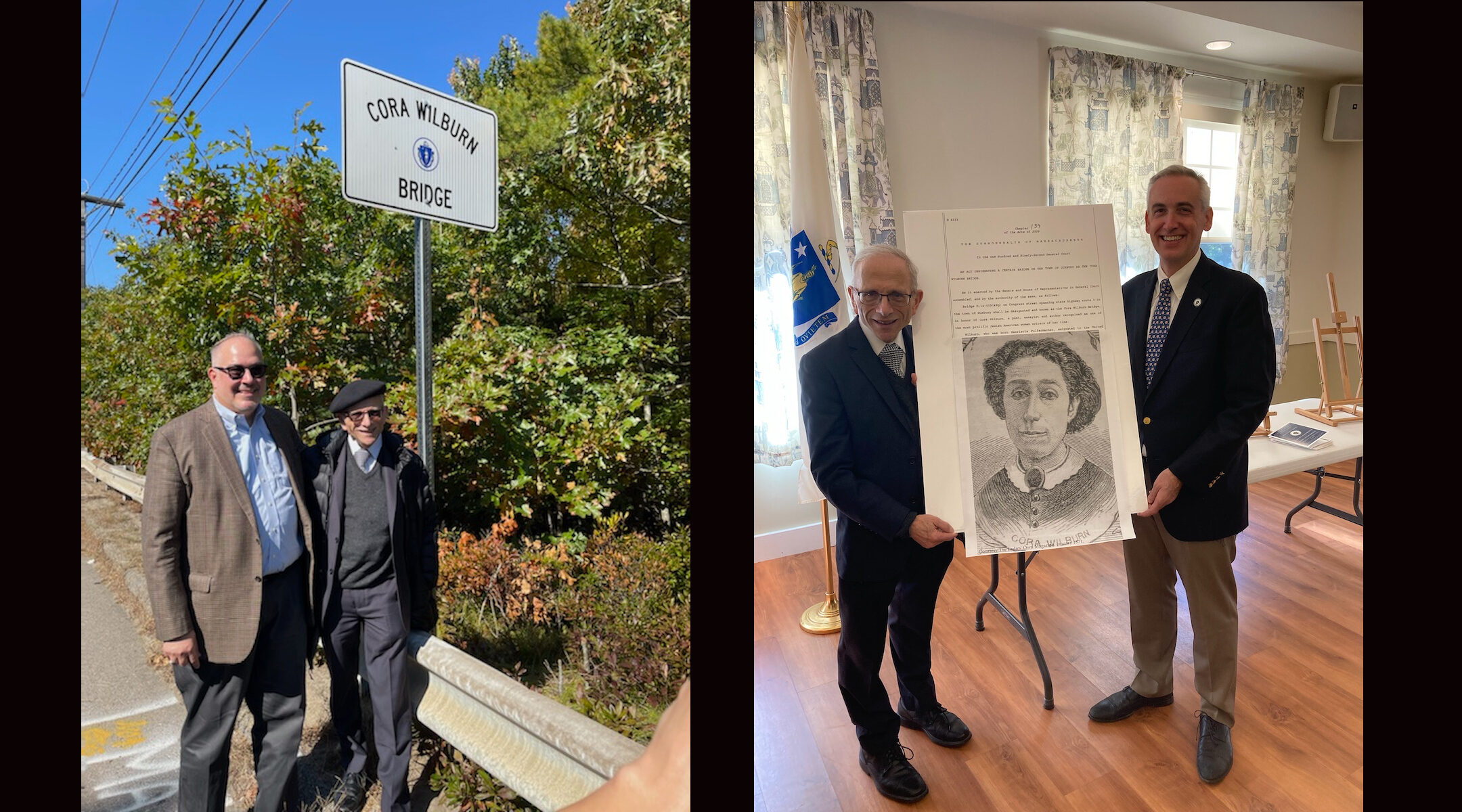 BOSTON (JTA) – A Massachusetts town at the center of a high school antisemitism scandal last year has just renamed a bridge in honor of a pioneering but little-known Jewish woman writer who lived there during the 19th century.

Cora Wilburn, whose autobiographical novel “Cosella Wayne” is likely the first novel published in English by a Jewish woman in America, settled in Duxbury, south of Boston, as an adult and lived there under her death at age 82 in 1906.

Now, 116 years later, the town of Duxbury has dedicated the Cora Wilburn Bridge in her honor, renaming “Bridge D-14-009(49Q)” in tribute to the trailblazing resident whose novel and widely published poetry and essays left a mark in religious circles across the country from Spiritualism to Judaism.

“Cosella Wayne” was republished recently alongside a scholarly essay about her by Jonathan Sarna, a Brandeis University professor of history who was present at the dedication ceremony Wednesday. He said a bridge was an appropriate tribute to Wayne, who was known for making relationships with people different from herself.

“How very fitting that we now remember this bridge builder with this bridge,” Sarna told the Jewish Telegraphic Agency.

Duxbury is where a high school football team was revealed last year to have used the terms “Auschwitz” and “rabbi” as football calls. The coach was fired and the town commissioned an investigation that found evidence of longstanding antisemitism in the team culture.

Last fall, as the town reeled from the revelations, Josh Cutler, a Duxbury native who represents parts of the town in the Massachusetts legislature, approached the local historical society with an idea to identify and recognize influential past residents who were not widely known or were from populations traditionally underrepresented in historical stories. This year, he filed legislation to recognize Wilburn, and Massachusetts Gov. Charlie Baker signed off in August, giving her name to a previously anonymous bridge at a highway interchange between two bogs.

Cutler said he was drawn to Wilburn because she was a “staunch advocate for social justice who gave a voice to the impoverished.”

Wilburn was born Henrietta Pulfermacher in 1824 in Alsace, France, in a Jewish family whose father was a dishonest gem merchant, an alcoholic who was known to be abusive. Always on the run from creditors and the law, he dragged his family, including his daughter, to far-flung locales across the globe.

At age 24, after her father’s death, the penniless Henrietta emigrated on her own from Venezuela to the United States where she first worked in Philadelphia as a low-paid house seamstress, often for well-off Jewish families. A few years later, she embraced a literary life and began writing and took the name Cora Wilburn.

Her autobiographical novel revealed the darker side of Jewish life, exposing poverty and domestic abuse and class divides that contrasted starkly with the images portrayed in Jewish literature of the time. She also wrote on women’s rights and spiritual exploration.

Drawn for many years to Spiritualism, a religious movement popular during the Civil War, Wilburn later publicly reaffirmed her Jewish faith, comfortable with the liberal tenets of Reform Judaism. She wrote poetry and essays for several Jewish publications.

Wilburn’s fierce passion for equality crossed race and religion, according to Sarna, who read at the bridge-naming ceremony from a letter Wilburn wrote just three years before she died, to Lilly Harris, a 19-year-old Black woman who had lived near her in Duxbury. Harris worked as a servant for a local family.

“Notwithstanding the 60 years that divided them, and their manifest differences in religion and race, Cora Wilburn addressed Lilly Harris as an equal,” said Sarna.

A second bridge, the Lewis Sisters Bridge, was dedicated Wednesday in honor of Ella Lewis Woodbury, Lillian Mae Lewis Hayes, and Beulah Lewis Fogg, three Black women who, in the 1930s, established and ran a residential camp in Duxbury for Boston’s Black youth. The expanded camp later attracted vacationing Black Americans from across the country.

Speaking at the ceremony, Jeremy Burton, executive director of the Jewish Community Relations Council of Greater Boston, commended Duxbury’s elected and community leaders for their vision in recognizing the diverse parts of their town’s history.

“As we celebrate the dedication of the two bridges, we celebrate the commitment to build bridges between communities and toward a better future,” said Burton, in remarks he shared in an email.