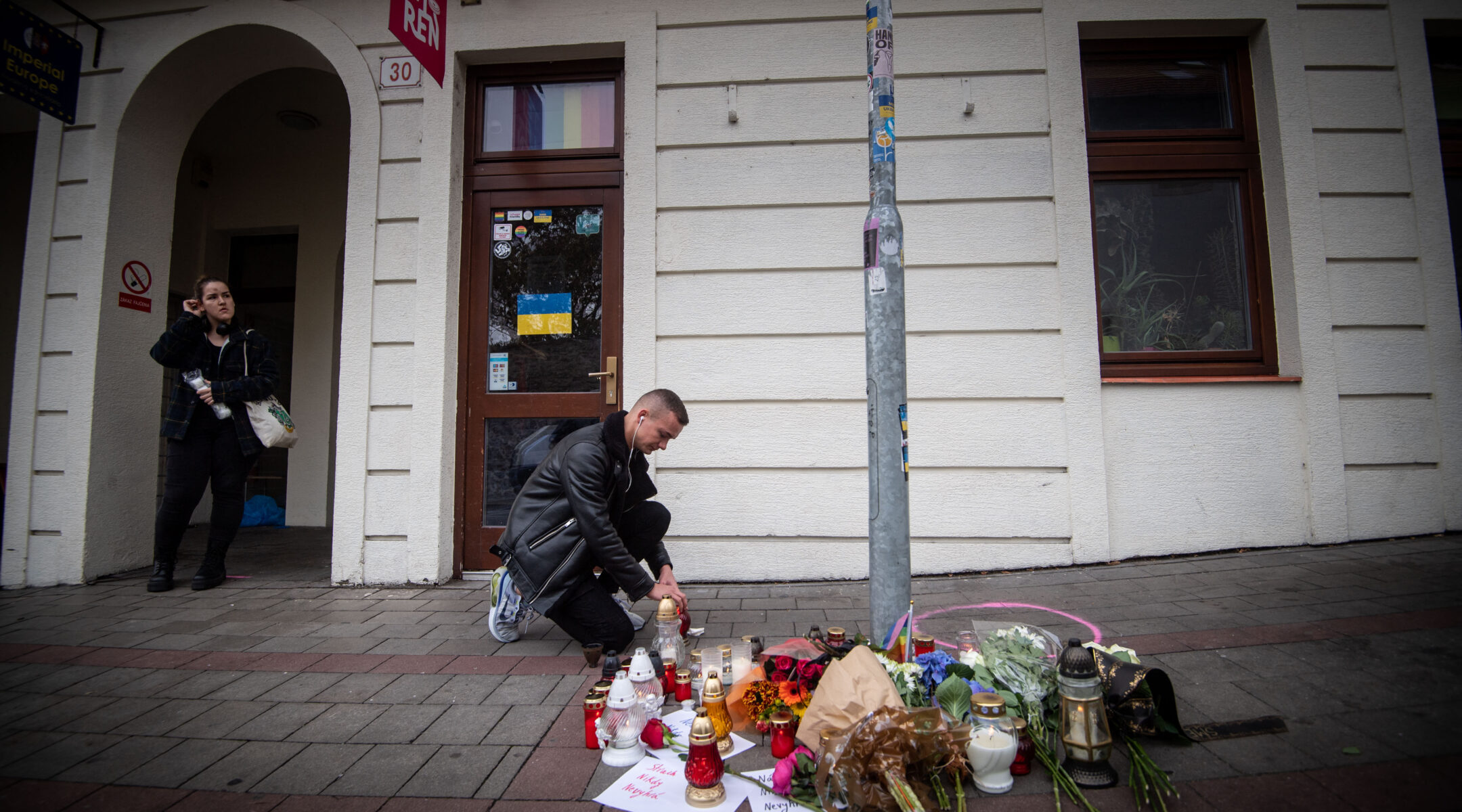 A man places a candle on the pavement at Zamocka Street in Bratislava after a "radicalized teenager" murdered two men there, Oct. 13. 2022 (Photo by Vladimir Simicek/AFP via Getty Images)
Advertisement

(JTA) — The man who opened fire outside of an LGBTQ bar in Slovakia on Wednesday was animated by the same ideas, including antisemitic beliefs, that have spurred multiple mass murderers in recent years.

The shooter, who killed two people and injured a third outside the Tepláreň bar in Bratislava, the country’s capital, was a “radicalized teenager,” according to the Slovakian president. He released a manifesto prior to the shooting and also outlined his beliefs on Twitter, where extremism watchdogs said he had been active for more than a year.

The shooter’s track record on Twitter “raises questions about the effectiveness of Twitter’s content moderation and the platform’s role in spreading white supremacist content,” the Anti-Defamation League’s Center on Extremism wrote in an analysis published Friday of the shooter’s manifesto and online profile. The analysis noted that the shooter, who was found dead on Thursday, had tweeted both about his plan to carry out an attack and to brag about having done so.

In the manifesto, the ADL said, the shooter expressed hatred for LGBTQ individuals, saying that they “groom” children, and support for “great replacement theory,” the idea that Jews are orchestrating a campaign to “replace” white people with people of color. He also used multiple phrases coined by neo-Nazi groups and called for the genocide of Jews, according to the ADL’s analysis.

The manifesto and its contents add the Bratislava shooting to a growing list of attacks that follow a similar playbook. Replacement theory has inspired multiple antisemitic and extremist attacks, including the 2018 Pittsburgh synagogue shooting in which 11 Jews were murdered; the 2019 attack on a New Zealand mosque that killed 51; the 2019 massacre at a Texas Wal-Mart that targeted Hispanic immigrants; and the murder earlier this year of 11 Black shoppers in a Buffalo, New York, grocery store.

“The Bratislava shooter’s writings demonstrate how well versed he was with American white supremacists,” tweeted Oren Segal, director of the ADL’s Center on Extremism. “White supremacy is a global terrorist threat.”

The attack has prompted recriminations and protests in Slovakia, where shootings are rare and murders hover around 60 per year, in a population of nearly 5.5 million. Thousands of people joined a rally in Bratislava’s picturesque old city to show support for LGBTQ Slovakians on Friday.

“We politicians are responsible for every single word we say. Yet so many here ruthlessly fill the space with hate,” wrote Slovakian President Zuzana Caputova on Facebook. “It makes me angry that even some prosecutors and judges don’t value verbal crimes and find them dangerous. I have been saying for three years and I warn you that it does not have to end in just words.”

“I strongly condemn a murder of two young people shot dead in Bratislava last night by a radicalized teenager,” tweeted Prime Minister Eduard Heger. “No form of white supremacy, racism and extremism against communities, incl. LGBTI, can be tolerated.”

Slovak media said the killer was the 19-year-old son of a one-time political candidate from the far-right anti-immigrant Homeland party and said police were investigating whether the gun had come from his father. The shooter communicated online on Twitter and 4chan, a message board frequented by extremists, after the incident, according to local media reports.

There, the ADL says, he appears to have found a warm reception.

“Already, violent extremists have begun lauding the Bratislava shooter as a ‘saint,’ equating him to earlier white supremacist terrorists — the very ones that he had admired,” the group wrote in its analysis.