When the Torah cycle ended, their Russian-American romance began 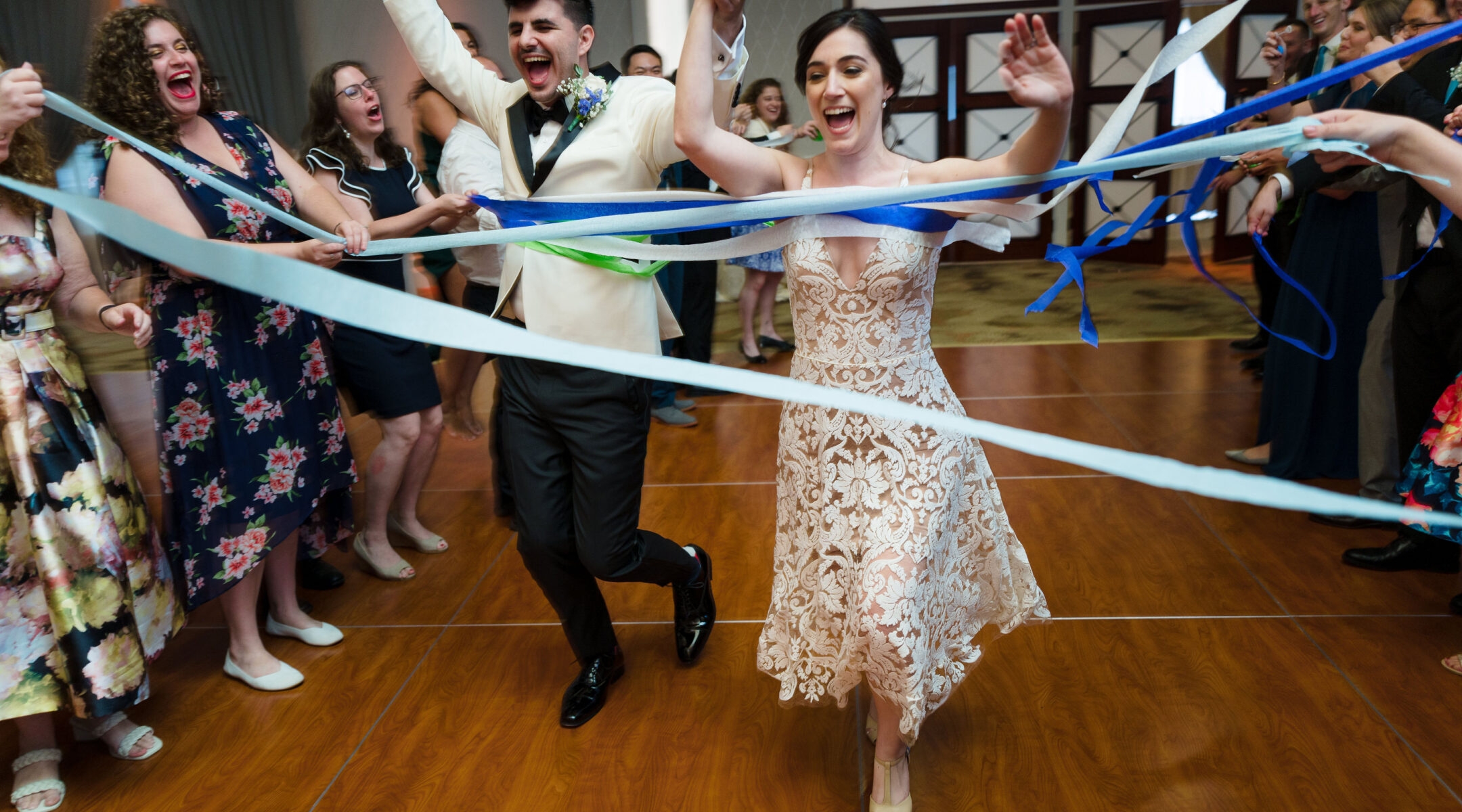 (JTA) — Tamar Caplan knew Alex Zeldin was the one when, a few months into dating, he asked if she knew why pigeons bob their heads.

“He had looked up the reason,” Caplan recalled. “I thought to myself, ‘I love that this is someone who is always wanting to learn about things he doesn’t know and share them with me.’”

Pigeons don’t actually bob their heads; instead, their heads stop while their bodies catch up — something of a metaphor for Zeldin and Caplan’s early relationship, when their friendship raced ahead of their romantic involvement.

The two first met through a web of mutual friends on the Upper West Side of Manhattan, and Zeldin had even attended a Shabbat dinner at Caplan’s apartment. But when, inspired by a shared conversation about ethical representation in science fiction, he proposed a date, Caplan turned him down.

“I believe I said, ‘I’m not emotionally prepared for that,’” Caplan recalled. She had recently ended a long-term relationship, and was dealing with a bout of depression; the timing felt wrong.

Then the pair reconnected at a Simchat Torah event at B’nai Jeshurun, a nondenominational synagogue in their neighborhood that celebrated the completion of a year’s Torah reading with a massive celebration.

“We started having these really remarkably in-depth conversations for people who weren’t dating,” Caplan said. Still, she continued to turn down his invitations to go out. 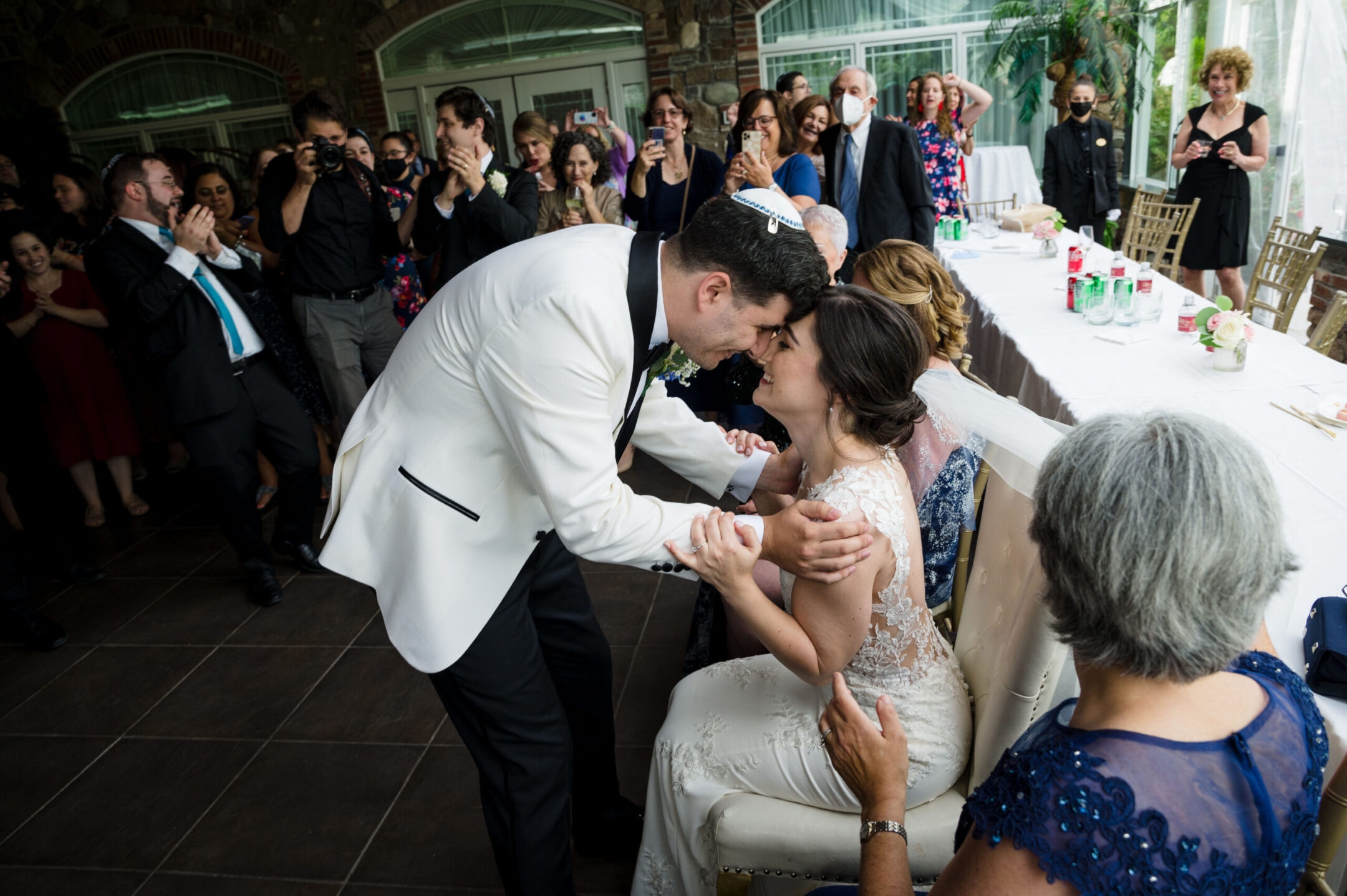 Tamar Caplan, seated, gazes into Alex Zeldin’s eyes during a ceremony that was part of their wedding. (JC Lemon Photography)

Finally, Zeldin told her he was going to start seeing other people, and he set up a date with someone else. That was enough for Caplan to give him a chance.

The other date never happened. Instead, in June 2017, he and Caplan went on their first date.

“I knew from the beginning” this would be the relationship worth waiting for, Zeldin said. “That’s why I was remarkably patient.”

In addition to their shared interest in sci-fi and other cultural issues, Caplan and Zeldin shared a commitment to Jewish life. Both keep kosher and observe Shabbat, and were active in the Upper West Side’s community of young religious Jews.

Zeldin, 31, had become more observant while a student at Rutgers University and developed his religious practice particularly while studying in Israel during college. He is now a contributing columnist for the Forward and a public speaker on Jewish identity and American foreign policy. Caplan, also 31 and an engineer who studied at Columbia University, grew up in the heart of the Conservative movement of Judaism, where her father is a cantor.

As they began dating more seriously, the one sticking point was finding a synagogue where they both wanted to pray.

Caplan, who grew up in New Jersey, where she was involved in a variety of Conservative Jewish institutions, prefers to pray in “traditional egalitarian” congregations such as Kehilat Hadar on the Upper West Side, where both men and women lead prayer and there is no mechitzah, or divider, separating the sexes.

But Zeldin finds it hard to follow along at places like Hadar, which assume a high level of Hebrew and ritual fluency. He prefers synagogues like the ones that embraced his family upon their arrival in the United States from Belarus when he was a toddler. Growing up in New Jersey, he attended Orthodox synagogues, many of them led by Chabad rabbis, that specifically welcomed an influx of Russian Jews whose knowledge of Jewish practice had been weakened by decades under Soviet rule.

“Coming from a Soviet background, many shuls are not intended to be a space for us,” Zeldin said. “Often, when Russian Jews do go [to synagogue], we’re watching other people, and we’re not actively involved with it. It’s not a thing we often feel welcome into.” 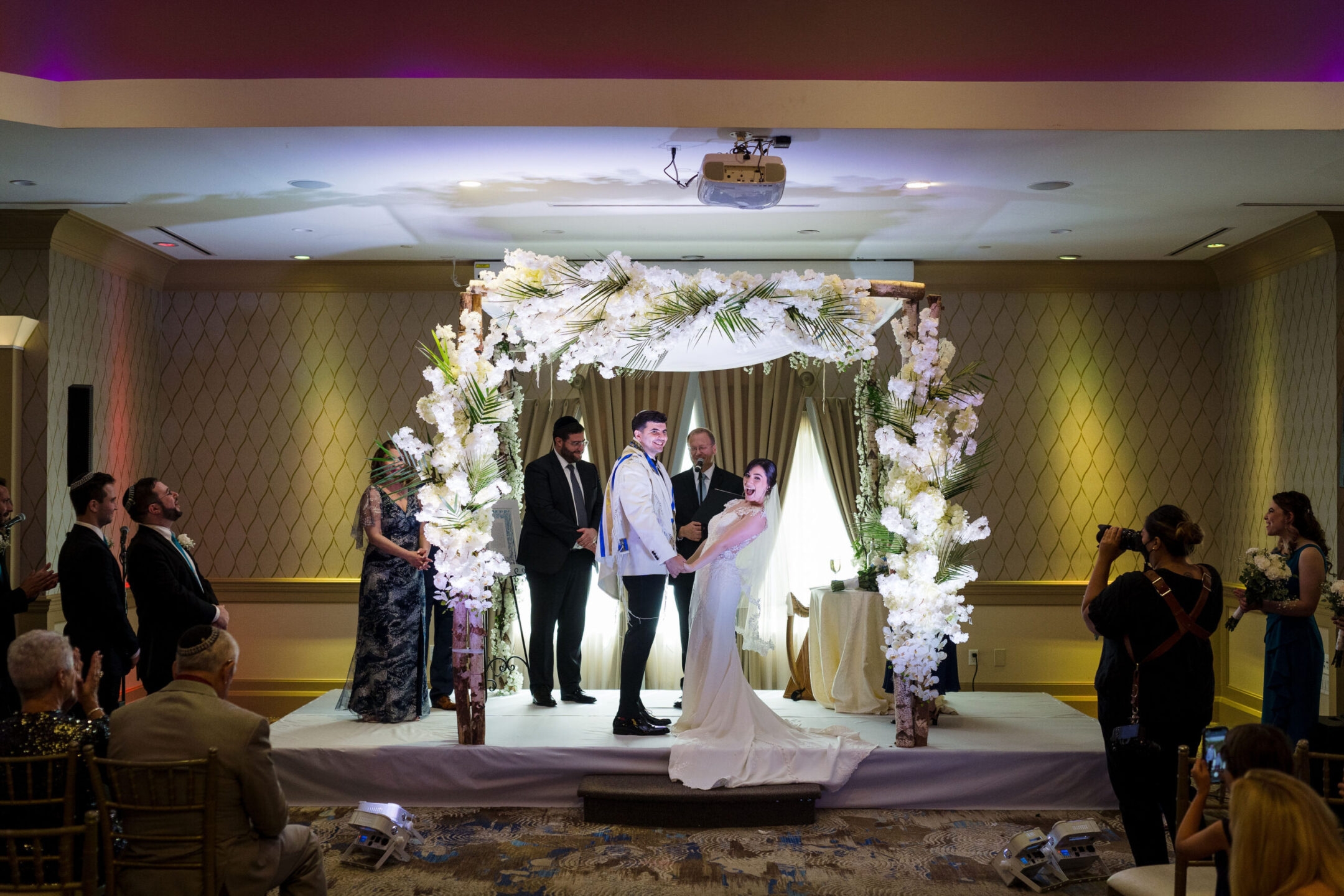 Tamar Caplan and Alex Zeldin stand under the chuppah at their wedding, with Rabbi Benjamin Goldschmidt and Caplan’s father, Joel Caplan, joining them. (JC Lemon Photography)

Though Zeldin appreciates how communities such as Hadar include full participation for women while Orthodox synagogues do not, he sees gender restrictions as just one of several barriers to synagogue inclusivity.

“This is my male privilege, but I don’t think of it in denominational lines,” he said. “I think of it as ‘where are Russian Jews welcome’ kind of lines. And very often, that’s in Orthodox spaces because they do more targeted outreach.”

As they navigated these different cultural vantage points, they began to realize their Jewish values overlapped far more than they diverged. In September 2021, Zeldin asked Caplan’s boss to ask her to do a site visit at B’nai Jeshurun, the synagogue where they first connected. When she arrived, he was waiting for her in the sanctuary, where he proposed.

Their religious differences began to feel more like preferences and less about an actual difference in values. “It is more about logistics than actually finding a middle ground,” Caplan said.

Those logistics helped set the stage for their Aug. 21 wedding at The Marigold, a venue in Somerset, New Jersey. Caplan’s father, Joel Caplan, who is the cantor at Congregation Agudath Israel in Caldwell, New Jersey, participated, but the officiating rabbi was Orthodox. The pair selected Rabbi Benjamin Goldschmidt, founder of the Altneu congregation, which serves, among others, a Russian-speaking community in New York City. 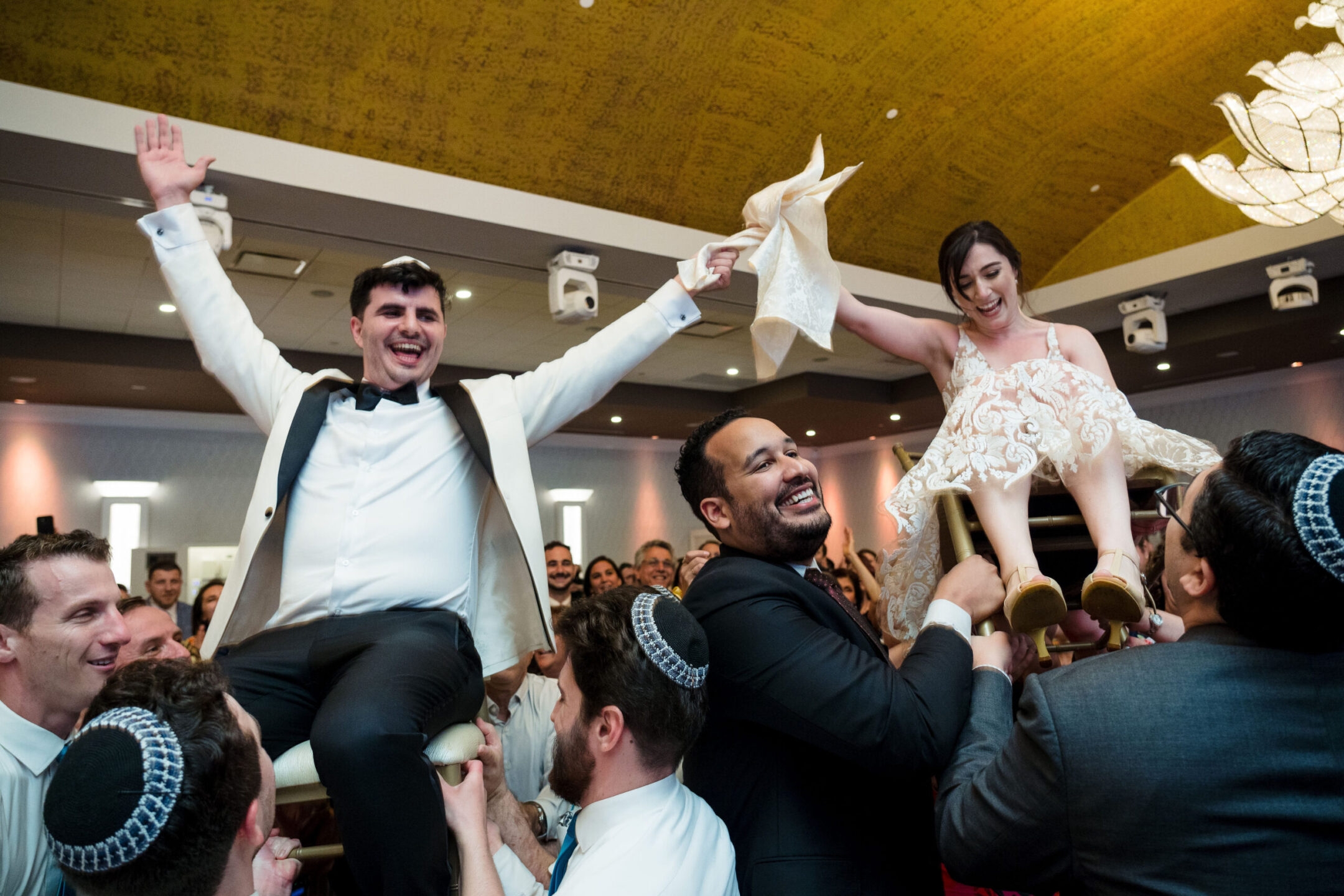 Alex Zeldin and Tamar Caplan are lifted on chairs during their wedding reception. (JC Lemon Photography)

Goldschmidt was ideal, Zeldin said, because he could communicate with the Russian-speaking guests, and because as an Orthodox rabbi, his oversight would reliably be respected by religious authorities in Israel. During his time studying in Israel, Zeldin said he saw firsthand how hard it was for some family members and friends from the former Soviet Union to prove their Jewish identity to the Israeli rabbinate, and he wanted to avoid any openings for future doubt.

The wedding reflected the Jewish values they have developed together, and the communities they hope to include in their lives.

“[The rabbi] spoke in Russian at the tisch and chuppah and explained to my family why we were doing what we were doing, and how wonderful it is for FSU Jews to be able to reclaim our heritage,” Zeldin said a few days after the wedding. “It brought my family to tears.”