As Russia scales back in Syria, Israel says it still won’t give Ukraine weapons 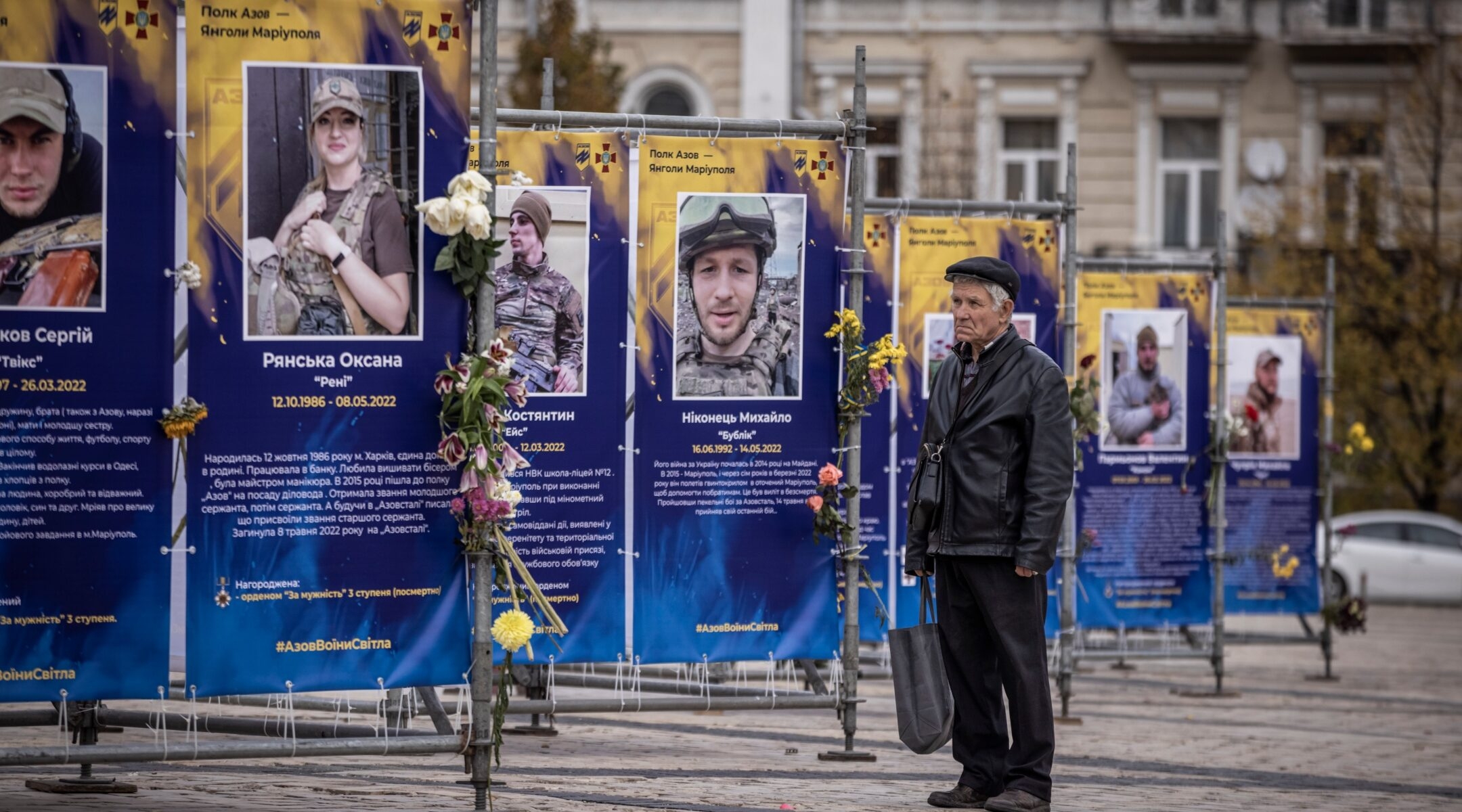 People walk past and look at an exhibition in Sophia Square of photographs of Azov battalion soldiers killed at the siege of Mariupol, in Kyiv, Oct. 19, 2022. (Ed Ram/Getty Images)
Advertisement

(JTA) — Intelligence officials say Russia has removed troops and an air defense system from Syria, removing a factor that until now has inhibited Israel from assisting Ukraine in defending itself from Russia’s war against the country.

Israel has delivered substantial humanitarian aid to Ukraine since the war’s launch but has resisted calls from the West and from Ukraine to provide defensive weapons. A main reason is that Russia has for years effectively controlled Syrian air space, making cooperation essential if Israel is going to continue conducting air raids there aimed at stemming the transfer and stockpiling of weapons likely intended for use against it.

“All the experts and ministers and the leaders of the state are explaining to me again and again that we have our challenge in Syria,” Natan Sharansky, a former Israeli minister who has been critical of his country’s approach to Ukraine, told the New York Times in April. “Unfortunately, the West gave the keys to the skies of Syria to Putin. And because of this we have no choice but to come to a strategic understanding with him.”

Now the airspace monitoring system that Russia had been using in Syria has been removed, according to a New York Times report citing an Israeli intelligence official and two Western diplomats. Russia has also removed at least 1,200 troops from Syria, according to the report, and both the soldiers and the equipment are believed to be rerouted to Russia’s war against Ukraine.

Ukraine’s Jewish president, Volodomyr Zelensky, has repeatedly called on Israel to provide the kind of missile interceptors that have successfully protected Israel during periodic outbreaks of violence with its neighbors.

The pressure has intensified in recent days as it appears that Iran is supplying Russia with weaponized drones and missiles; Israel’s defense industry is focused particularly on designing defenses against weaponry designed by its deadliest enemy in the region.

The Biden White House organized a call with reporters on Thursday to describe what it said was the escalating Iranian contribution to the Russian war effort, including the placement of Iranian weapons trainers in Russian-occupied Crimea.

“We assess that Iranian military personnel were on the ground in Crimea and assist Russia in these operations,” National Security Council spokesman John Kirby said referring to drones, or unmanned aerial vehicles. “The fact is, Iran is now directly engaged on the ground, and through the provision of weapons that are impacting civilians, and civilian infrastructure in Ukraine, in fact, that are killing civilians and destroying civilian infrastructure in Ukraine.”

Kirby said in response to a reporter’s question that the Biden administration would not pressure Israel to sell weapons to Ukraine.

“Israel should have the right to speak to what they’re willing to do or not willing to do without judgment, because it’s got to be a decision that they make, and we want to respect that process,” Kirby said.

Benny Gantz, Israel’s defense minister, on Thursday reiterated Israel’s position that it would not provide weapons to Ukraine.

“Our policy vis-a-vis Ukraine will not change,” Gantz told ambassadors from European countries in a meeting. “We will continue to support and stand with the West; we will not provide weapon systems. We have asked the Ukrainians to share information regarding their needs, and offered to assist in developing a life-saving early-warning system.”

Nonetheless, Gantz made it clear that Israel was closely watching the delivery of Iranian weapons systems to Russia. “We are following Iran’s involvement in the war in Ukraine,” he told the European ambassadors. “We see that Iran provides UAVs and in the near future may also provide additional advanced systems.”

The Biden administration would not pressure Israel into delivering weapons systems, John Kirby, the spokesman for the National Security Council, said Thursday in a conference call with reporters which he called to