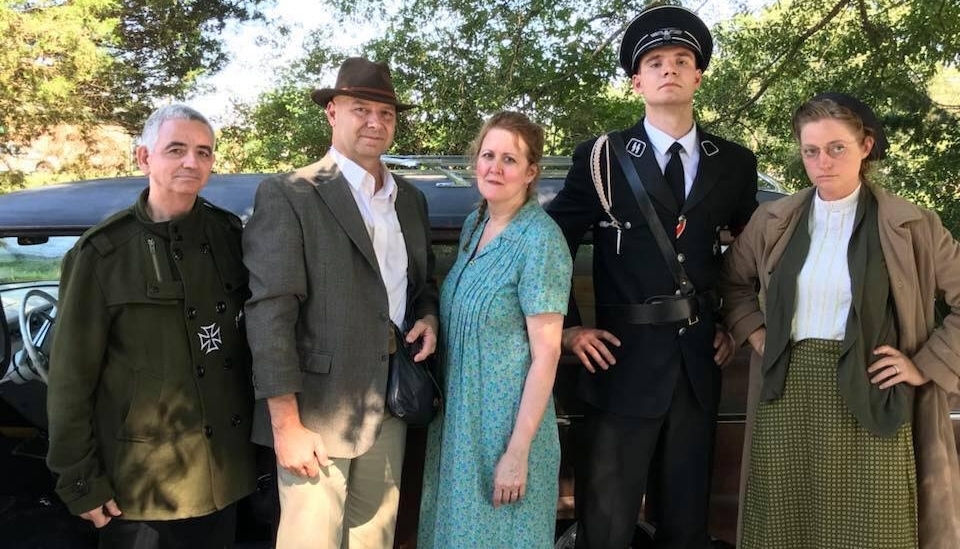 (JTA) — Doug Mastriano, the Republican nominee for governor in Pennsylvania who has drawn scrutiny for his association with antisemites, acted in a 2019 film about the rescue of Jews that has drawn criticism from Holocaust scholars — and from its Jewish star — for Holocaust distortions.

The New Yorker and The Washington Post this week both reported on “Operation Resist,” which purports to depict the rescue of Dutch Jews by American spies. Mastriano plays an American spy and also helped finance the movie.

The film, which is fiction, operates from a thesis that abortion and gun control pave a path to Nazi-like control. It begins with an effort by liberals in the present day to remove Holocaust education from a school board curriculum, then flashes back to the rescue of a Dutch Jewish girl, Miriam.

At the end, the film returns to the present, in which a Holocaust survivor who attends a meeting of the school board explains that Miriam is his sister, and uses her experience to decry abortion, gun control and government overreach.

“How about the millions of babies today whose lives are snuffed out before they’re even born because they are inconvenient. It’s time to say never again!” the fictional Holocaust survivor says. Some conservatives have invoked the Holocaust to decry policies that permit abortion and restrict gun sales, a practice that Holocaust scholars have decried as a manipulation.

Mastriano said at the time the movie was made that he and his family were “blessed” to be involved by fundraising for the movie. “This exciting movie grapples with sacrifice and heroism during the horrors of the holocaust,” he wrote on Facebook.

Multiple family members also appeared in it, Mastriano as an American spy and his son a Nazi whom his character chokes into losing consciousness. “When you wake up Fritz, tell Hitler he’s next,” Mastriano’s character says.

Matsriano has drawn scrutiny for his association with Andrew Torba, the antisemitic founder of Gab, a social media platform favored by many far-right extremists. He has also been criticized for calling his opponent, Pennsylvania Attorney General Josh Shapiro, an elitist for sending his children to a Jewish say school.

The Washington Post screened the film for four Holocaust experts, who all hated it. “It is offensive to weaponize the Holocaust for political ends, yet that is what this film does and quite proudly,” Neil Leifert, the director of the Center for Holocaust and Jewish Studies at Penn State, told the newspaper.

The film also gets Jewish ritual wrong as well as details of the Holocaust; it imagines an impossible meeting of the fictional Miriam, Anne Frank and Audrey Hepburn. It depicts Nazis slaughtering Jews through mass shootings, when most Dutch Jews were deported to death camps.

Ashleigh Burnette, who plays Miriam, is Jewish and was unsettled by the overt Christianity on the set, where days would start with Christian prayer, and in the movie, in which rescuers would declaim about their Christian belief while carrying out the rescue.

“Maybe the movie was really about shedding light on Christianity? That a great Christian lady was helping me, so bless the Christians?” she told The Washington Post.

James Moran, the film’s director, blamed inaccuracies on his tight budget — he made the film in his native South Carolina — and said that he hoped Burnette and her mother, who accompanied the actress, would have corrected any errors he made in depicting Jewish ritual.

But Moran said his film’s analogies to abortion access and gun control were appropriate. He was inspired, he said, by an article in a South Carolina newspaper that reported the removal of Holocaust education from a social studies standards guide.

“My main point in the movie was that the Holocaust has lessons for us regarding today’s environment politically,” Moran told The Washington Post. “Once you start down the trail of whose life matters, you have entered the mind-set of Nazism … and it’s what I saw happening today as people are seen as inconvenient lives and as the government seeks to remove the guns of innocent civilians.”

The article in The State, in 2017, made clear that the omission was an oversight that the state schools chief said would be immediately rectified. There was no indication the removal was driven by liberals, some of whom were appalled at the omission. The only challenges to Holocaust content in schools in recent years have come from the right wing, and most of them have been retracted amid public outcry. Lawmakers on both sides of the aisle have advanced legislation to require Holocaust education in dozens of states.