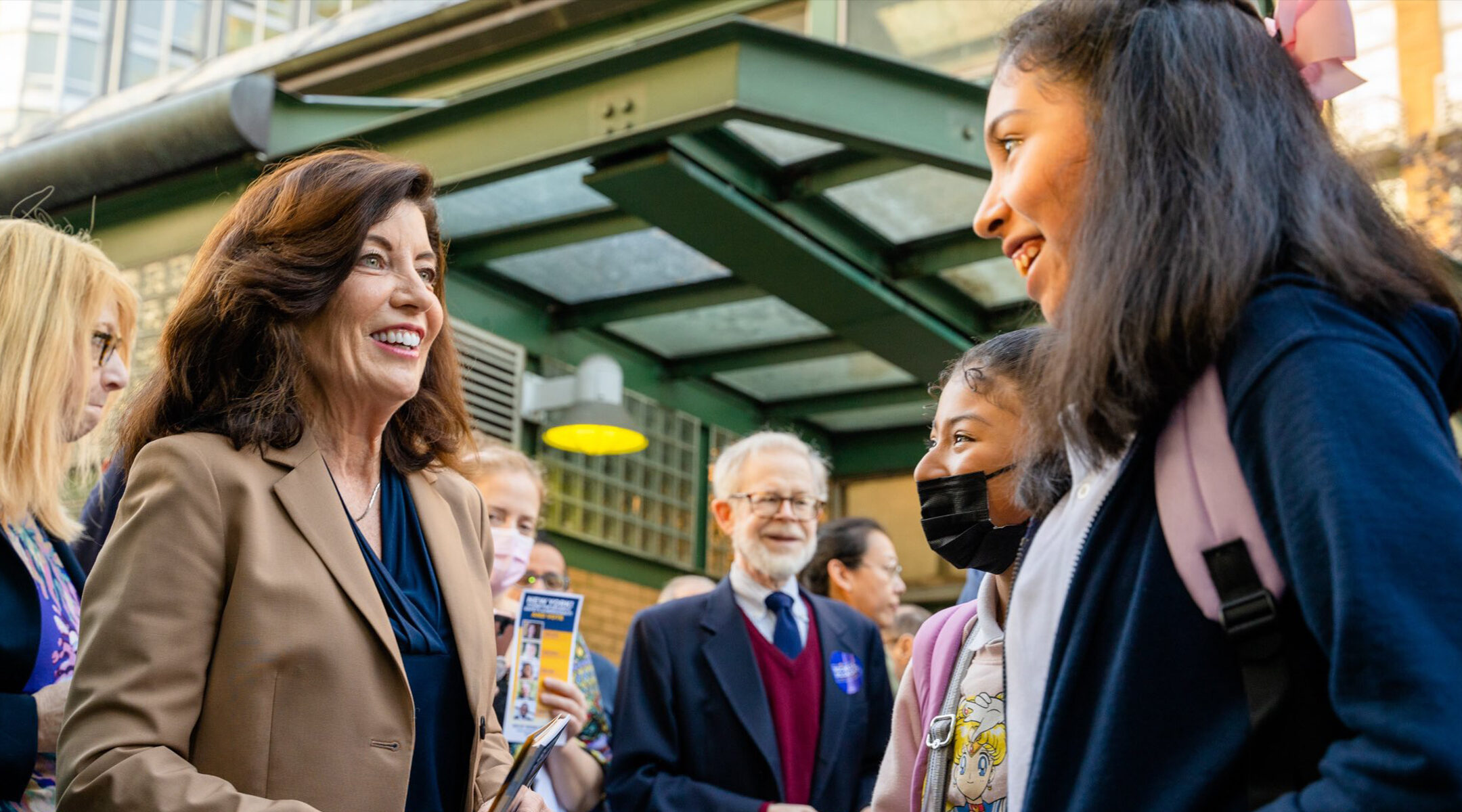 Governor Kathy Hochul campaigning at the 72nd Street subway stop on the Upper West Side, with Assembly member Richard Gottlieb in the background. (Hochul Campaign)
Advertisement

Coming amidst increasing concerns over antisemitism, the announcement represented the kind of advantage that an incumbent like Hochul could use to seal the deal with Jewish voters and other targeted minorities.

The same day, the governor was seen on the Upper West Side, campaigning with notable Jewish politicians such as Rep. Jerry Nadler and Manhattan Borough President Mark Levine in the final hours before Election Day.

But incumbency has its limits, even for a Democratic candidate in a blue state with a gaggle of Jewish political supporters. Hochul is facing a surprisingly strong challenge from Rep. Lee Zeldin, the Long Island Republican who has been hammering her hard on crime and the economy.

On Tuesday, we are going to rise up, march to the polls and send a message to all those who have been knocked down and underestimated: together, we are unstoppable. pic.twitter.com/A36kMrFRDl

In her relatively short time as governor, after having taken over from a disgraced Andrew Cuomo in August 2021, Hochul has been supportive of the kinds of positions important to most Jewish voters.

Gideon Taylor, the CEO of the Jewish Community Relations Council of New York, told the New York Jewish Week in a statement that the organization has worked closely with Hochul on issues “concerning New York’s Jewish community, including hate crimes, antisemitism and the New York-Israel relationship.”

“In fact, the Governor joined JCRC-NY to provide her first public address to the Jewish community, participated in the Shine a Light event against antisemitism in December, and marched in the Celebrate Israel Parade,” Taylor said.

“At our very first event, we had several elected officials there, and she was one of them,” said Matt Nosanchuk, the executive director of New York Jewish Agenda, a  progressive Jewish think tank that was founded in April 2020. “She was lieutenant governor at the time. At that point, no one imagined that she would soon be the governor of New York State.”

Nosanchuk, who said his organization does not endorse candidates, said Hochul is “aligned with the priorities and values of the pluralistic and diverse Jewish community that NYJA represents.” He noted the legislative package she signed to protect abortion, legislation she signed to improve Holocaust education, funding for groups that are at risk of being the target of hate crimes and a package of criminal justice reforms.

Nosanchuk also called Hochul “a strong supporter of Israel,” while saying she also leaves space for open discussion and disagreement in regards to the Jewish state. Hochul extended an executive order issued by Cuomo that prohibits the state government from investing with firms engaging in the anti-Israel boycott — which some progressive groups have challenged on free speech grounds. NYJA does not support the Boycott, Divest and Sanctions movement targeting Israel.

“Free speech rights need to be respected,” Nosanchuk said. “She recognizes that, but she’s navigating between various constituencies around those issues. I think that she’s handled that tactfully as well.”

Nosanchuk also alluded to Zeldin’s advantage with the Hasidic and haredi Orthodox communities, who appear to be energized by his tough-on-crime policies and pledge not to interfere with secular education at their yeshivas. Nosanchuck said NYJA seeks to represent the majority of New York Jews are who not Orthodox.

“That’s the voice we are seeking to amplify,” Nosanchuk said. “We’re not as easily identifiable or organizable. We’re not seen as an easily identified voting bloc.  There is a big, pluralistic, diverse Jewish community that cares about the issues, and they need to show up at the ballot this year.”

Hochul has also gained grudging support from Jewish groups seen as to the left of NYJA, who in turn hope Hochul appreciates the progressives who have campaigned for her.

Rachel McCullough, political director of Jews for Racial & Economic Justice, told the New York Jewish Week that the progressive group first began working with Hochul when she was lieutenant governor on a campaign called Fair Pay for Home Care. It focused on giving raises to homecare workers, who are employed by many Jewish families.

“She herself had been a caregiver and currently is a caregiver for her father who has Parkinson’s disease,” McCullough said. “She had a reputation for being very hard-working and being out there on the trail. People always had positive interactions with her.”

In New York, we can do all three at once by voting on the Working Families Party line. #VoteWFP pic.twitter.com/C0b9dPnA6Q

McCullough said she “was not happy” with some of Hochul’s stances on bail reform and the Buffalo Bills stadium deal. Despite Zeldin’s efforts to portray Hochul as an uncritical champion of efforts to eliminate cash bail, the governor signed on to a budget in April that strengthened bail restrictions and tightened rules for repeat offenders. Progressives also said a $600 million deal for the NFL team came at the expense of spending on the social safety net.

“We’re really clear that we have to defeat Lee Zeldin,” McCullough said. Hochul “could be a really powerful progressive leader for our state.”

Zeldin, meanwhile, hopes that alone is enough to scare off Orthodox Jews, who form important voting blocs in Brooklyn and the Hudson Valley. In Brooklyn, Hochul was endorsed by the Ahronim faction of the divided Satmar Hasidic movement, but she has not been able to capture the same momentum as Zeldin, who has picked up major Brooklyn endorsements, including from the Bobov, a large Hasidic movement in Borough Park.

Last week, the Skver Hasidic sect in New Square, a Hasidic village in Rockland County, did endorse both Hochul and Rep. Sean Maloney, a Democrat who represents New York’s District 17 and is also facing a surprising tough race for reelection.

Before that, the community’s leader, Rabbi David Twersky, received a call from President Joe Biden, who asked Twersky to support Maloney over his Republican opponent, Mike Lawler, a state assemblyman who is picking up steam in the race. The president’s intervention suggests how seriously Democrats are taking the Republican surge in the state and the power of the Orthodox vote.

Hochul also met with Rabbi Aaron Teitelbaum, the leader of the Satmar faction that is centered in Kiryas Joel in Orange County.

Maury Litwack, the managing director of the Orthodox Union’s public affairs operations, told the New York Jewish Week that Kiryas Joel is one of the most “coveted” voting blocs in the state.

“They have a track record of encouraging voting in their community and taking endorsements seriously,” Litwack said. “Endorsements in these communities mean something. They have a history of turning people out to vote.”

During the primary race for governor, Hochul initially received broad support from the Orthodox community, campaigning on a stronger stance against hate crimes, increased funding for Holocaust survivors and expanding security in non-public schools.

Yet after the New York Times published an expose last month scrutinizing poor secular education standards at yeshivas, Zeldin came out in full support of the Jewish parochial schools, saying in a statement that “New York is wrong for pushing these substantial-equivalency standards” for teaching math, English and other subjects.

“As Governor, I will promote more school choice, not less, and do everything in my power to fight for students first and empower parents to be in control of the family’s destiny in life,” Zeldin said.

Yitzchok Fleischer, a Borough Park political insider associated with Bobov who was close with former mayor Bill de Blasio, told the New York Jewish Week that his group did not have that much of a relationship with Hochul.

“She didn’t come over here much,” Fleischer said. “I’m not against her, but she was really not noticed in our community.”

Litwack disputed that claim, saying that Hochul was “very active” in the community, highlighting an instance in 2017 when Jewish Community Centers across the state were targeted by bomb threats.

“She traveled around to shuls and schools to talk to them about their security needs,” Litwack said. “In the year before she was governor, she visited different communities as much as she could. She was always someone who wanted to get out there as much as possible.”

Another Orthodox source, who wished not to be named, told the New York Jewish Week that Hochul was in the community “frequently” as lieutenant governor starting in 2015.

“She made a very good impression,” the source said.

In comparison, Hochul “never addressed the issue directly,” according to the Orthodox source.

“When she was meeting people, she was always talking very nicely about yeshivas,” the source said. “We heard support a lot of times verbally, but it was more general. It felt like with her position she was saying, ‘it’s not mine.’”

Hochul released a letter demonstrating her support for yeshivas earlier this week, appearing to recognize that it was crucial to her campaign to address the issue. “I will do everything in my power to protect you from evil and hate and will continue to fight for your right to practice your religion and teach your children with your religious education,” she wrote.

However, there was another sentence that seemed to worry some Orthodox voters: “I also fundamentally believe that every school across New York should have the resources to provide a proper education that gives every student the opportunity to be successful, and I remain committed to ensuring that continues to be the case,” Hochul wrote.

“It’s a not too veiled way of her saying, ‘Hey, if yeshivas are good, then I’m ready to fund it,’” Gestetener said. “‘But if you guys have a problem, then nope.’ What’s up with that line?”

Still, Litwack noted that it was not fair to show that a Zeldin surge within the Orthodox community means that their relationship with Hochul is broken.

“In this situation, the policies that Zeldin is promoting are more attractive than the policies that Hochul has been promoting,” Litwack said, referring to Zeldin’s climb in the polls. “But it’s not a product of a bad relationship. It has to do with public policy, that’s where things have shifted.”

In Monday’s announcement, Hochul’s office said the hate crimes security package includes $50 million to strengthen safety and security measures at nonprofit, community-based organizations at risk of hate crimes or attacks because of their ideology, beliefs, or mission, and $46 million in federal funding for 240 nonprofit organizations across the state facing an increased risk of terrorist attacks.

“Hate has no place in New York, and we will continue to support organizations that are most vulnerable to vicious and violent attacks,” Hochul said in a statement.

A PIX11 poll released on Tuesday showed that Hochul has increased her lead over Zeldin by 8 percent. Other polls show the race to be much closer.