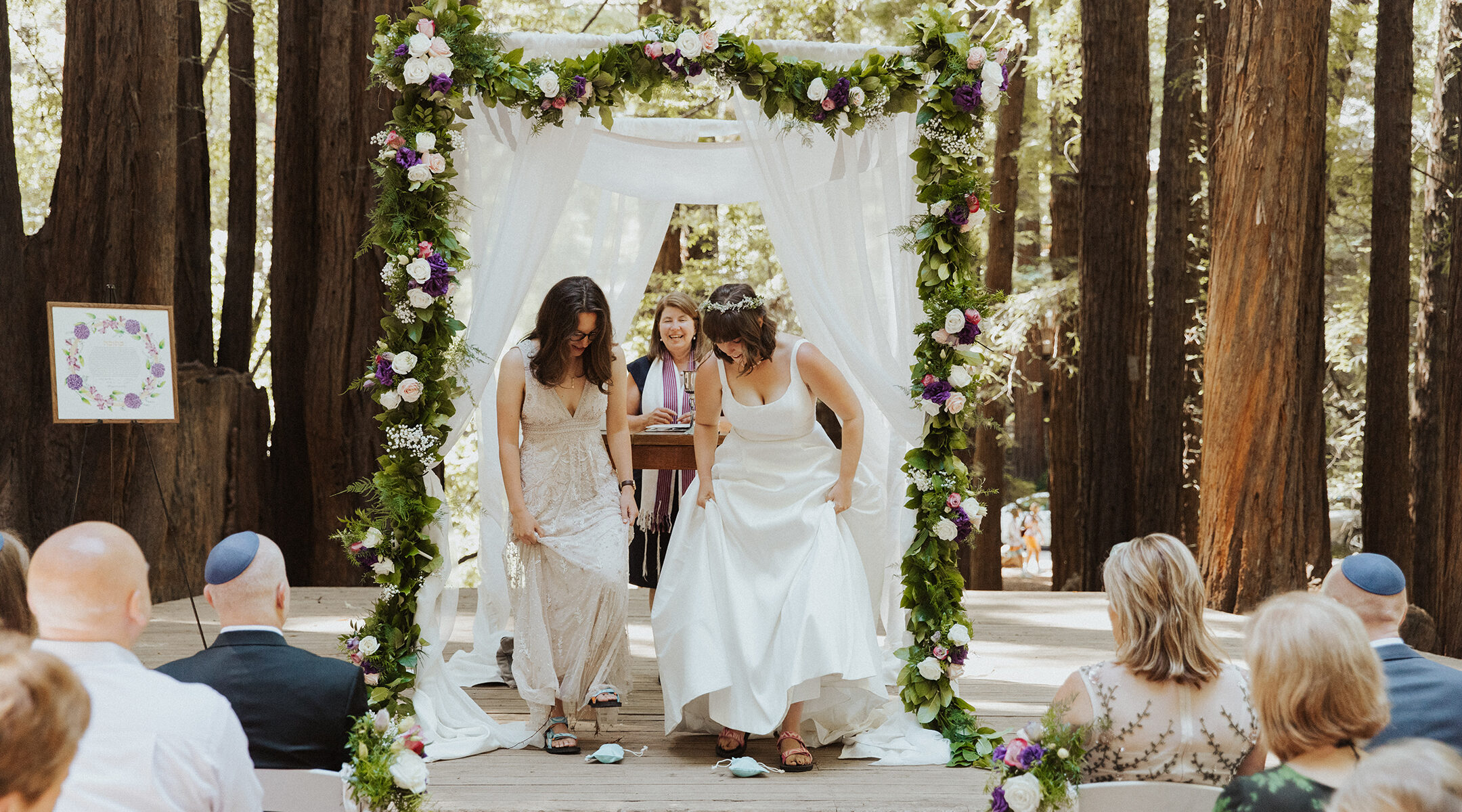 (JTA) — Zoe Dressner and Margeaux Wolberg had just one month free between graduating from college and when they were due in Jerusalem to begin rabbinical school. So, they figured, in addition to packing, finding an apartment and nailing down the logistics of a 6,000-mile move, why not get married?

At 23 and 22, respectively, the women are much younger than the average college-educated brides — but the decision to marry felt like a natural step in the relationship that began just months into college, accelerated because of the pandemic and, they knew, was headed for a shared destination in the rabbinate.

“The only questions left were do we go directly after college or take a year off, and which school do we apply to,” said Dressner. “Luckily, we both felt really attached to the Reform movement, which meant we were both set on attending Hebrew Union College. We’re lucky that it worked out.”

They had been together for less than a year when all colleges and universities in the United States shuttered their campuses because of the descending pandemic.

“We lived with my family and her family. We weren’t in college with our friends anymore,” Dressner said. “We figured that if this is working, then it must be legit, and it was.”

Their love story traversed three of Judaism’s denominations. Both women were first-year students in the joint program between Columbia University and List College, the undergraduate school of the Conservative movement’s Jewish Theological Seminary,when Dressner asked her classmates in an introductory Bible class whether anyone would like to check out a Reconstructionist Shabbat service. She got only one taker: Wolberg. 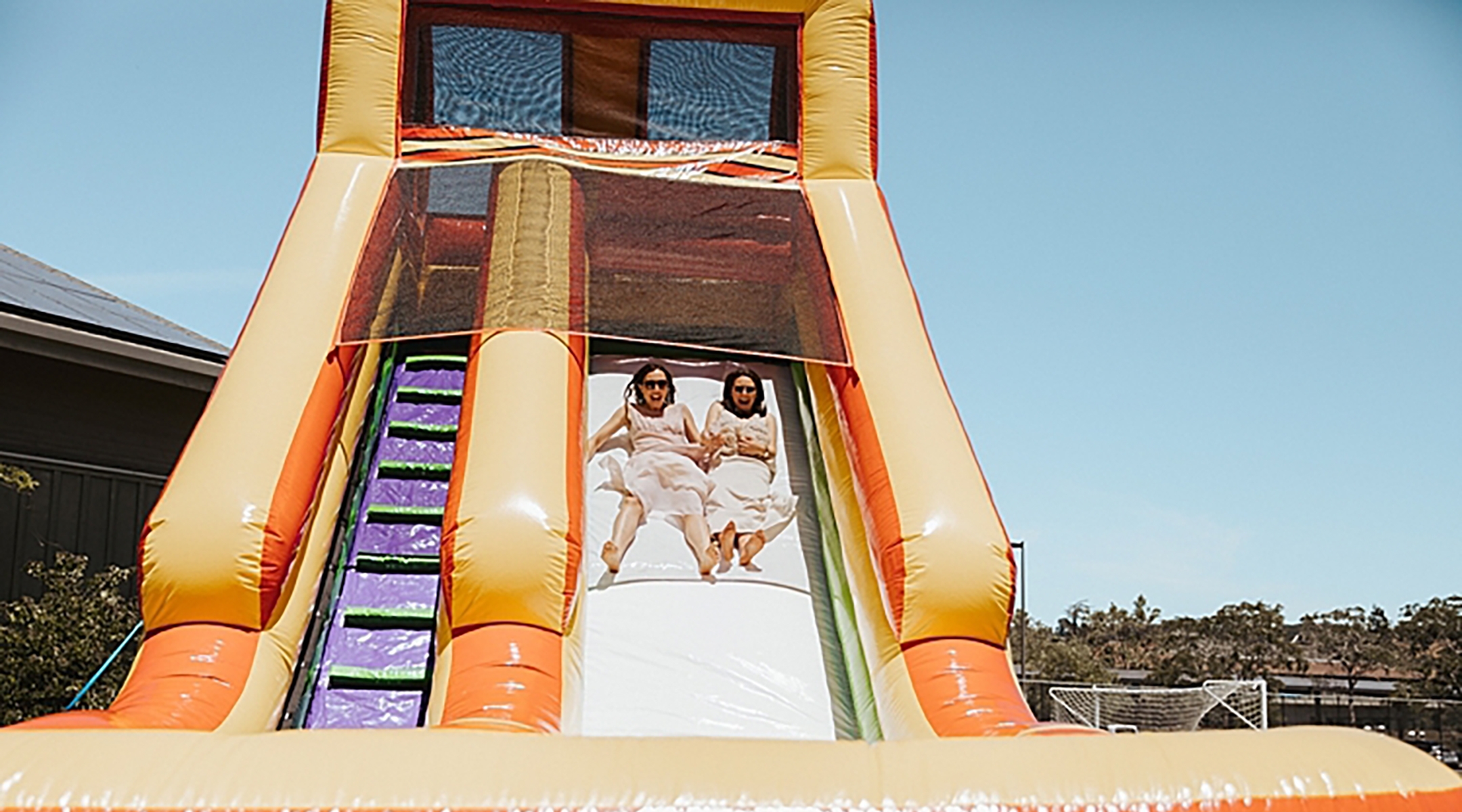 One feature of the wedding stood out: a bouncy house. “I need to be pushed out of my comfort zone,” Dressner said. (Courtesy)

The next morning, on a cold January day, they walked from Morningside Heights to the Society for the Advancement of Judaism, commonly known as SAJ, a Reconstructionist synagogue about two miles south of the JTS campus, and back. As they chatted, they learned they had something in common that was relatively rare for students at List College: Their Jewish passion had been stoked in the Reform movement, through their synagogues and the NFTY youth group — Wolberg in San Francisco and Dressner in East Brunswick, New Jersey.

Three months after their Shabbat morning stroll, the two women opened up to each other that their new friendship was turning into something more.

Neither had ever dated another woman. In fact, Dressner was the first person Wolberg ever dated at all.

“She was my first kiss,” Wolberg said. “And now we’re married.”

Once they planned to wed, they decided it would mostly fall on Wolberg to plan the wedding, while Dressner would plan the proposal. Back in New York, on Dec. 23, 2021, Dressner’s itinerary took them from a light show at the Brooklyn Botanical Garden to sipping warm cider on a rooftop bar to dinner at a kosher steakhouse. They also exchanged rings.

“We started the day by walking around Morningside Heights and recalling special memories together: dates, places we’d lived, etc.” Wolberg said. “I wasn’t surprised that we were getting engaged that day, but the whole day’s plan was a surprise.”

Their wedding similarly packed a lot into a short time. After heading to Calfornia from New York, they had a five-day window in which to marry before leaving for Israel. They set their sights on Sunday, June 12, but their preferred venue could accommodate them only on June 10, the Friday before.

The pair married amid the redwood trees at Old Mill Park in Marin County, holding a daytime reception that reflected a slew of their passions: Mediterranean food, progressive politics (informational posters about same-sex marriage and gun control) and Tevas, the outdoor sandals that both nature enthusiasts have long favored. 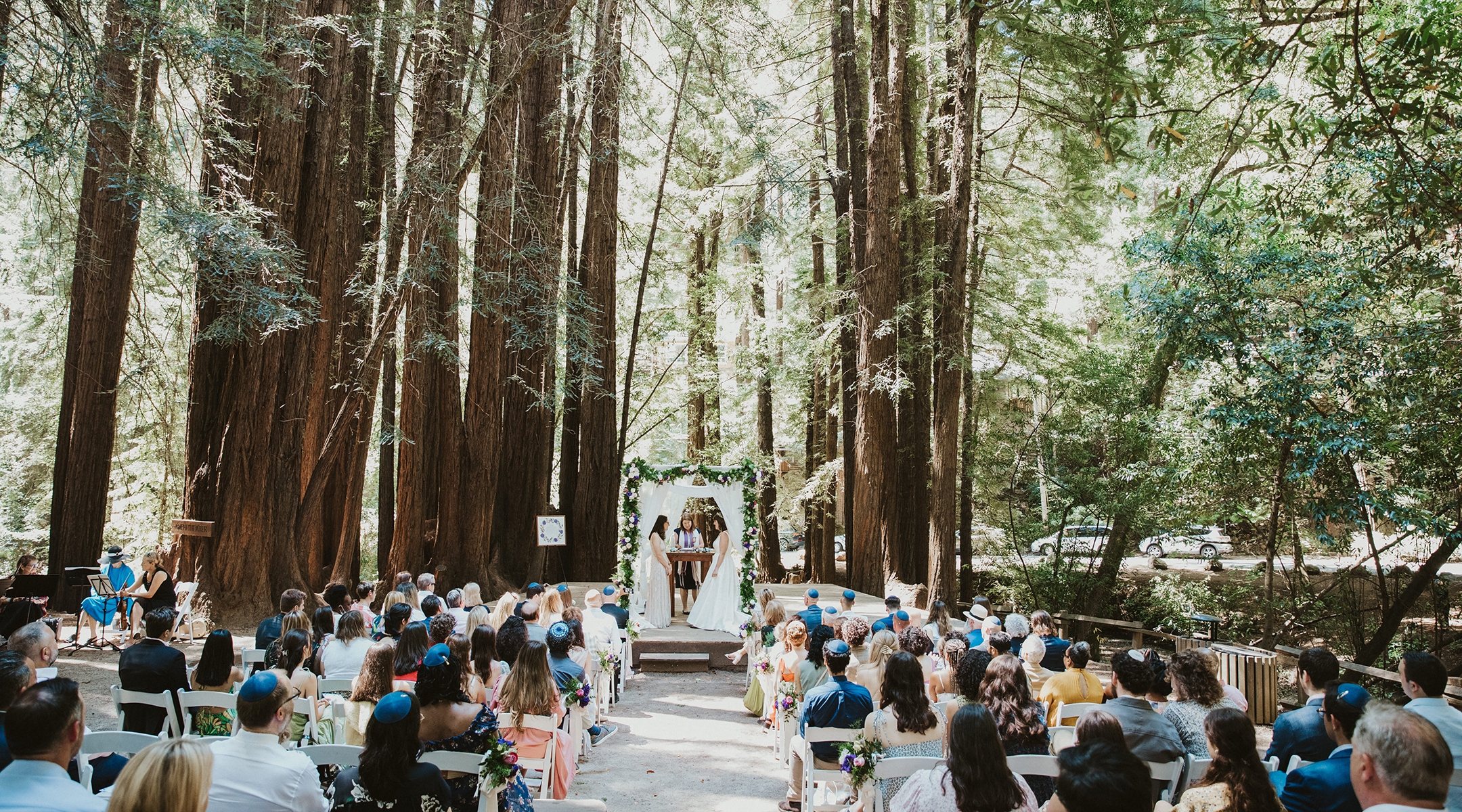 Then the couple headed to Kabbalat Shabbat services at San Francisco’s Congregation Emanu-El. (Beth Singer, Emanu-El’s rabbi, had performed their wedding ceremony after another rabbi and cantor had to cancel.) A catered dinner followed, at which their grandparents and siblings recited the sheva brachot, the blessings said during the first week of a marriage. They went back Saturday morning for services, then headed to Wolberg’s parents’ house for a family lunch. That night, they held a party for their friends.

The couple said they appreciated that Shabbat services became a continuation of their celebration. They also said that one feature of the wedding stood out: the bouncy house.

That was Dressner’s idea. Given their ages, she said, she thought, “Why not?”

But although some of their parents were initially skeptical about it, most of the guests partook. And one could also see the massive inflatable slide that the couple zoomed down together as a metaphor for their relationship.

“I’m much more reserved personality-wise, and sometimes I need to be pushed out of my comfort zone,” Dressner said. “I learn a lot from the wonderful way Margeaux approaches the world so differently.”

Meanwhile, Wolberg said that among the traits she loves most about her partner is that she has long considered herself a bit of an eccentric (her love of Renaissance music was part of what endeared her to Dressner), and thought it might be difficult to find someone who would put up with her many quirks.

“Zoe wholeheartedly accepts me,” she said. “My quirks are the things she loves the most. She’s not just putting up with me, but really loves all of me for exactly who I am.”