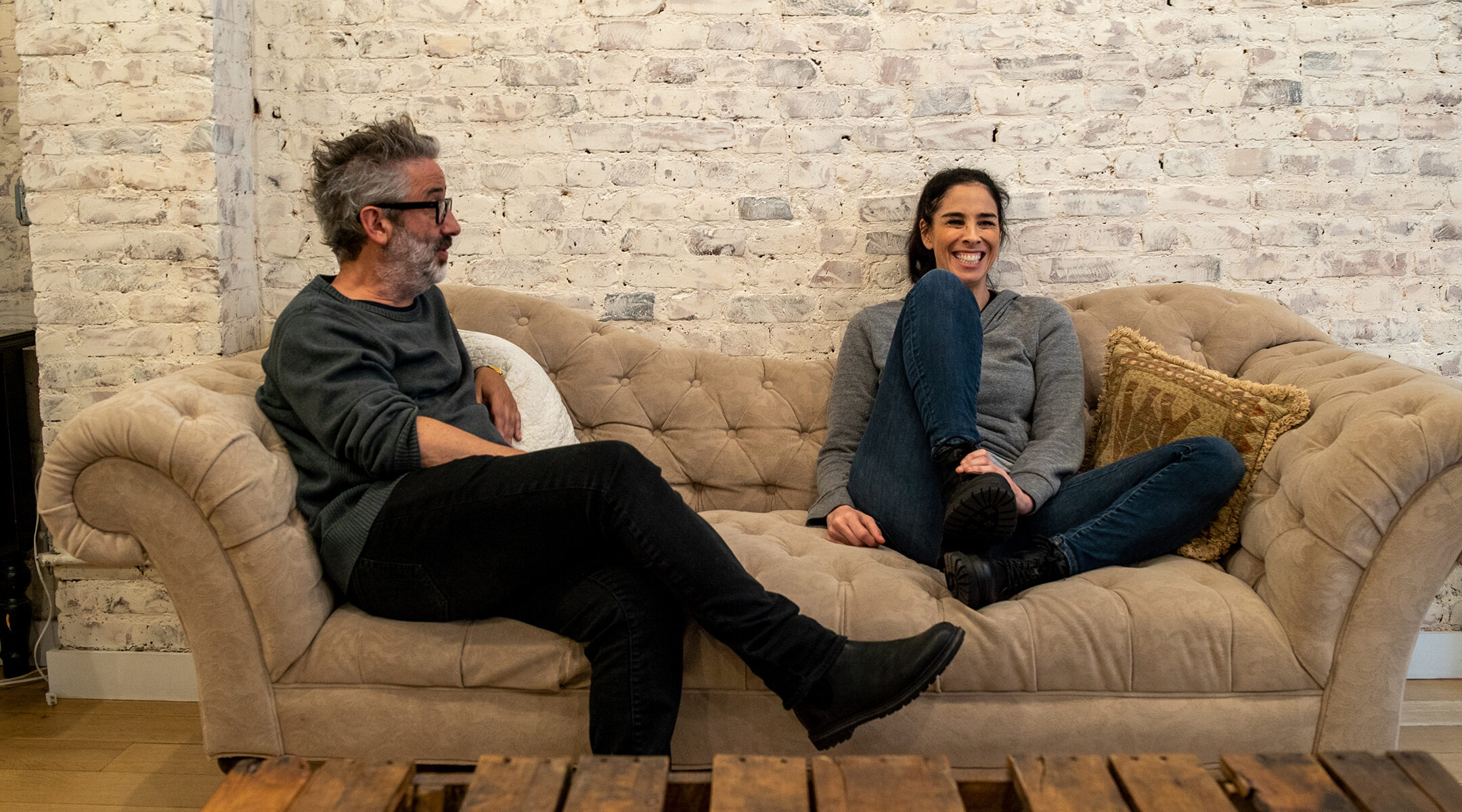 Sarah Silverman is one of several Jewish stars who feature in David Baddiel's documentary, which discusses whether Jews lack allies in progressive spaces. (Channel 4)
Advertisement

LONDON (JTA) — David Baddiel, a comedian-turned-activist against antisemitism who calls himself “one of the U.K.’s very few famous Jews,” was holding court in the basement of one of Britain’s best-known TV studios.

As a reporter headed hurriedly for the exit, Baddiel slouched into his chair, seemingly exhausted by the interview he had just completed about the forthcoming documentary based on his 2021 bestseller, “Jews Don’t Count.”

“I am speaking to many people like the last journalist who had not thought about any of this in their life,” he said.

The “this” Baddiel was referring to was to the idea, outlined in his book, that progressive anti-racists are guilty of hypocrisy towards Jews by not viewing them as worthy of similar protection or championing as other minorities because they are seen as white, privileged and wealthy.

When the book came out last year, it received rave reviews, and Baddiel has since become seen by some as a “voice for Britain’s Jews.” He often litigates the finer points of contemporary antisemitism as a guest on radio and television, and he has been quick to square off with trolls and critics on Twitter.

Now, with the premiere of an hour-long documentary also called “Jews Don’t Count” on Britain’s public Channel 4 network, Baddiel gets a primetime slot to make his case to a bigger audience. Featuring Baddiel’s interviews with Jewish stars of pop culture in both Britain and the United States — ranging from comedian Sarah Silverman to novelist Jonathan Safran Foer to actor Stephen Fry — the film argues that “in a culture where all forms of racism are being monitored, called out and held accountable, one form is apparently invisible.”

“With the intensification of identity politics and concerns about minorities, and offense and inclusion and representation, all that stuff seemed not to be tracking for Jews,” Baddiel explained to the Jewish Telegraphic Agency as the general point of his work. “We seemed to not be part of that conversation. There seemed to be less offense about antisemitism and less inclusion and representation of Jews.”

Baddiel, who shot to fame in the 1990s when he collaborated with fellow comedian Frank Skinner for a BBC sketch show on soccer, is also known as the co-author of “Three Lions,” which has become the de facto anthem for the English national soccer team and has recently enjoyed a revival during England’s tournament runs. He has also appeared on several TV shows and has published several children’s books.

He became a more prominent voice as a campaigner against antisemitism during Jeremy Corbyn’s scandal-plagued tenure as Labour Party leader from 2015 to 2020 — though he is keen to stress that neither the documentary nor his book are about “Jeremy f—ing Corbyn.” His move into documentary making follows his appearance in a well-received BBC documentary, “Confronting Holocaust Denial,” that aired last year.

Baddiel said he cares less about specific arguments under the umbrella of his broader argument. Regarding the “Jewface” debate, for example, over whether or not Jewish actors should play Jewish characters on screen, Baddiel claims he is “not really interested” either way — even though the topic takes up a large portion of his documentary, coming up in conversations with actors such as Silverman, Miriam Margolyes and David Schwimmer.

“Whether it is right or not is not the point,” he added. “They are not saying that ‘it is a Jewish role, so we have to get a Jewish actor.’” 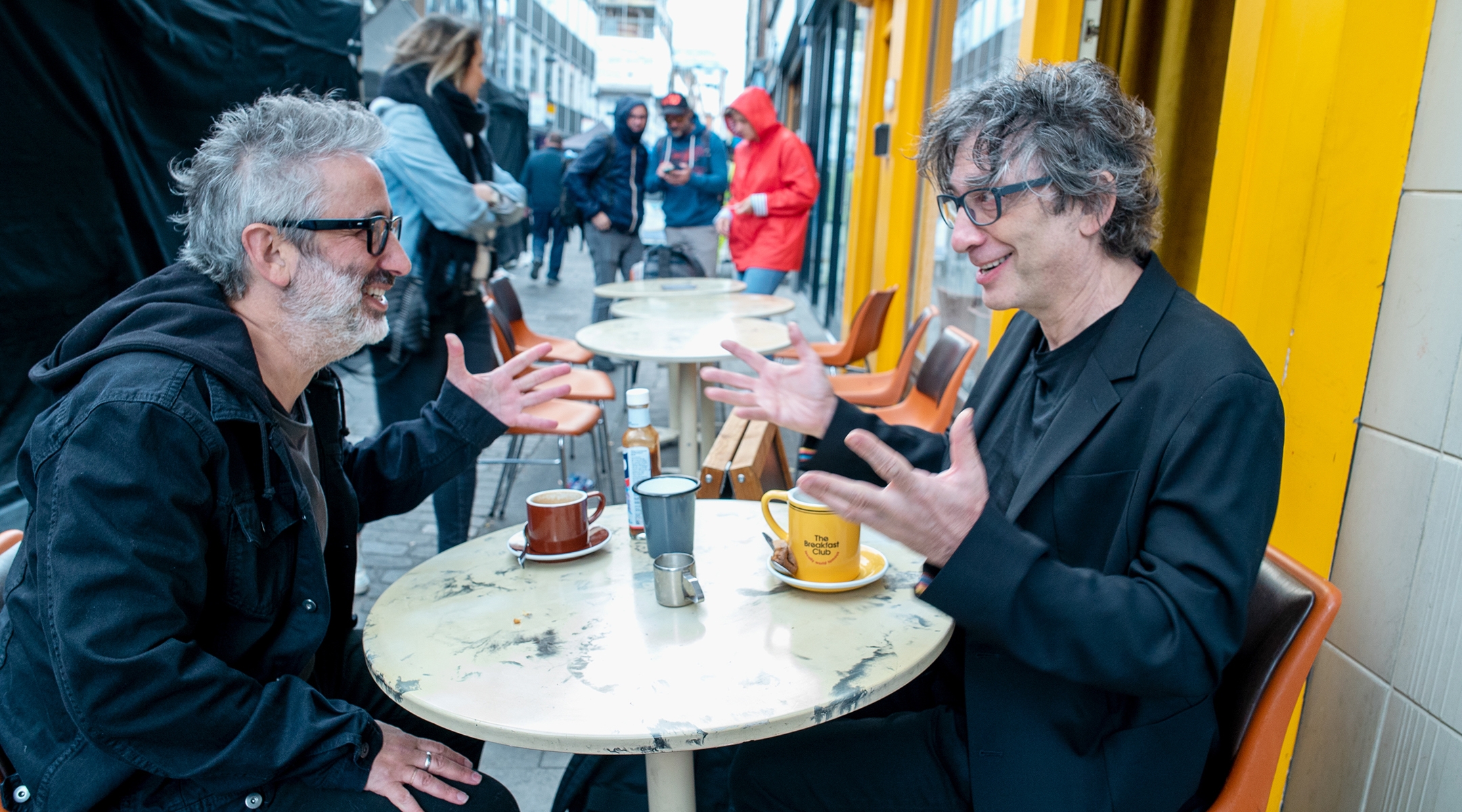 Perhaps controversially, Baddiel — while recognizing that there is a certain privilege in being able to “pass” as white — has argued that being white is more about being “protected because you are a member of the majority culture” than it is about skin color. He says antisemitism is racism, and not about “religious intolerance.”

In the documentary, Schwimmer says, “I have never felt white.”

“I am highly aware that I pass as white and I enjoy a lot of the privileges of being a straight, white, man, able bodied, I get it, I understand, and I am very aware of my privilege,” Schwimmer says before mentioning the murder of two Jewish civil rights activists by the Ku Klux Klan in Mississippi in 1964. “I never felt white, because for me, white means safe.”

Schwimmer, who recently spoke at the Anti-Defamation League’s conference in New York City, goes on to say that while “Friends,” the sitcom he starred in, has been criticized for its lack of diversity, it did include a minority presence. There were multiple Jews, in the form of Schwimmer’s Ross Geller character and his sister Monica, along with Jennifer Aniston’s character Rachel Green.

“You know what would happen if you said that,” Baddiel says in response. “People would get aggressive about it.”

Schwimmer responds: “You’re right, people would just be like: ‘not a real minority.’”

Baddiel is hardly speaking for all British Jews. One case in his book and documentary involves the fact that British Jews are not offered “Jew” as an option on the census when asked to select their ethnicity. (The same issue has been debated in the United States, where white respondents were asked in the 2020 census to write in their racial “origins.”)

“It is othering and alienating” that Jews do not have a distinct option box, Baddiel said.

But the view that Jews should not have an ethnicity option has historically and continues to be the position of the main representative body for British Jews, the Board of Deputies, as well as the Institute for Jewish Policy Research, a think tank that studies the demographics of British and European Jews.

The Office for National Statistics, which administers the census, investigated the possibility of adding a Jewish ethnicity option ahead of the 2021 census in England and Wales. The ONS consulted with the Jewish groups and, in cooperation with polling firm Kantar, concluded that Jews in Britain viewed it “highly unacceptable” given historical concerns about discrimination and “the racialisation of religious groups.”

The ONS and Kantar found that most Jews “did not identify as an ethnicity” and that adding an ethnic option would be counterproductive, as “its inclusion may cause participants to question whether they wanted to complete the census.”

Baddiel questioned the conclusion, arguing that the most recent research was “a long time ago” and that such views were “massively out-of-date notions of what representation and inclusion looks like.” He said he had “certainly” felt demand for a Jewish option “from the people who speak to me.”

Baddiel’s book garnered mostly positive reviews, but Josh Glancy, a British-Jewish journalist, wrote in the Jewish Chronicle that he Baddiel’s ideas implied “emphasising and amplifying every aspect of Jewish victimhood” to a point that would require “a level of self-imposed martyrdom that simply doesn’t align with most contemporary Jewish lives.”

Stephen Bush — a prominent Black and Jewish journalist who conducted a landmark racial inclusivity report for the Board of Deputies last year, and who is interviewed for a few seconds in the documentary — argued in The Times that Baddiel was “so concerned with asserting his own lack of privilege that he forgets his obligations to others: not least to talk and to listen to them.”

Baddiel’s idea that “progressives turn a blind eye to and dabble in just one form of racism, and that the experiences that he grapples with would not occur if he were black, Asian, or from another ethnic minority” would “struggle to survive a conversation with more than three people from any other minority,” Bush argued. 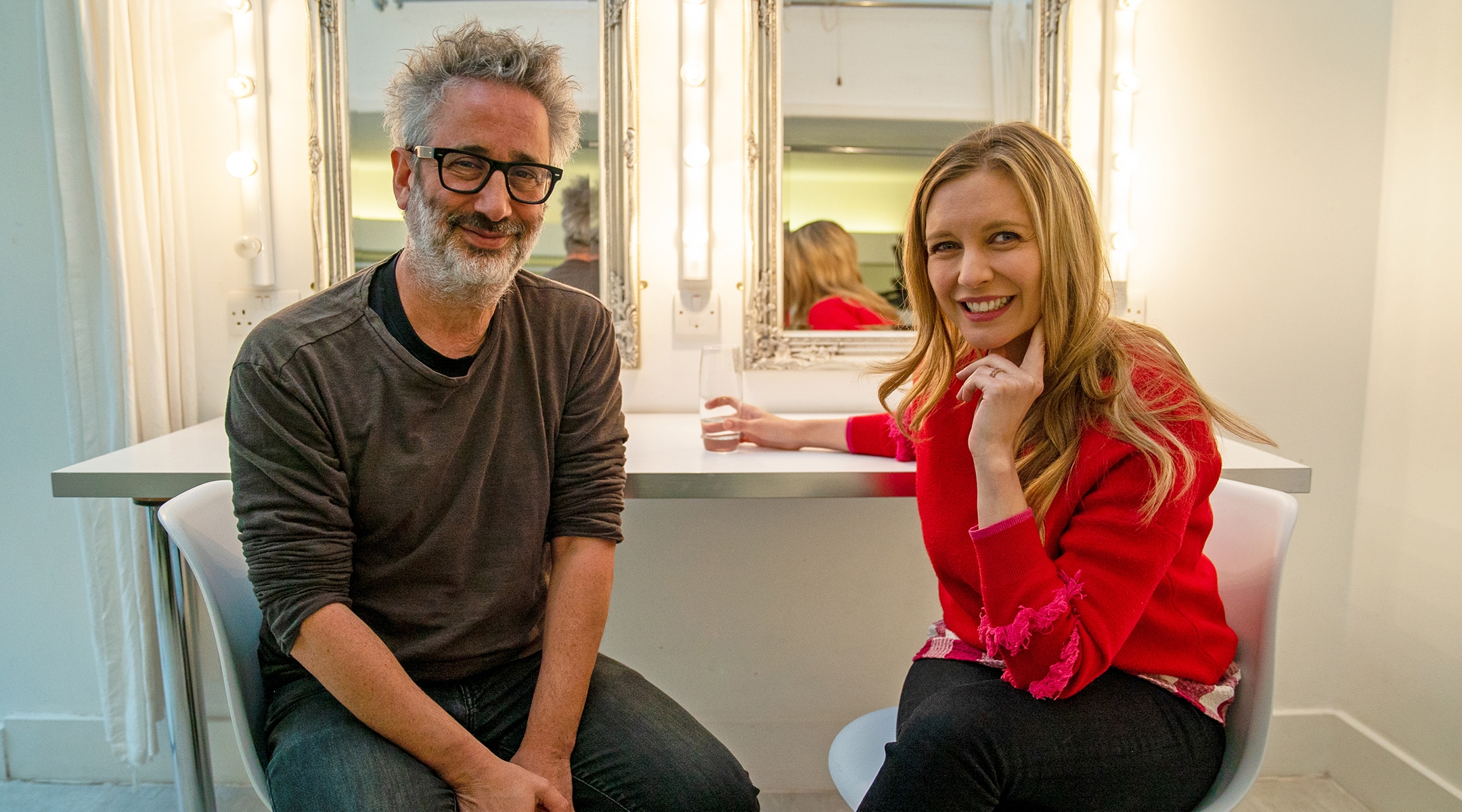 Baddiel said he is “sort of not that interested” in people’s responses, adding, “Glancy is wrong. He doesn’t understand the book.”

In response to Bush, Baddiel said: “That is not something that most minorities are asked to do. I think that most minorities, particularly now, when they present testimony of their lived experience of racism, it would feel racist to say to most of them, ‘why should I listen to this, because you don’t seem to talk about any other minorities.’

“That’s a ‘Jew’s Don’t Count’ phenomenon, what you are talking about,” he continued, “that it is incumbent upon Jews to have to make more space.”

Among the portions of the documentary that have attracted the most interest in Britain is an apology that Baddiel offers to Jason Lee, a former professional soccer player whom Baddiel mocked in blackface for a sketch in the 1990s. Many feel that Lee’s career was negatively affected by Baddiel’s sketch, even though he pushed back on that idea in a recent interview with the Guardian. Baddiel has accepted that his portrayal of Lee was racist.

Lee, who has since gone on to campaign against racism in soccer, was also interviewed in The Times, opening up about how he had felt “violated on so many levels” by Baddiel’s sketch.

For his fellow Jews, Baddiel is less conciliatory. He claimed to not be aware of criticism from within the Jewish community over his theses. “Literally no one” he said had come to him with any concerns, he said. He often feels “whatever the Jewish equivalent of the Bat Signal is” and recalled how a senior Labour Party politician “came up to me yesterday and said: How does it feel to be the person saving the Jews?”

At one point during his JTA interview, Baddiel interrupted a question about why he had not chosen to speak to any visibly Orthodox Jews — despite their presence in the background of several shots in the documentary — by repeatedly asking: “What’s your problem? What’s your problem?”

“I am not really interested in understanding Jews,” he said. “I am interested in the ways that our present way of seeing racism fails Jews.”