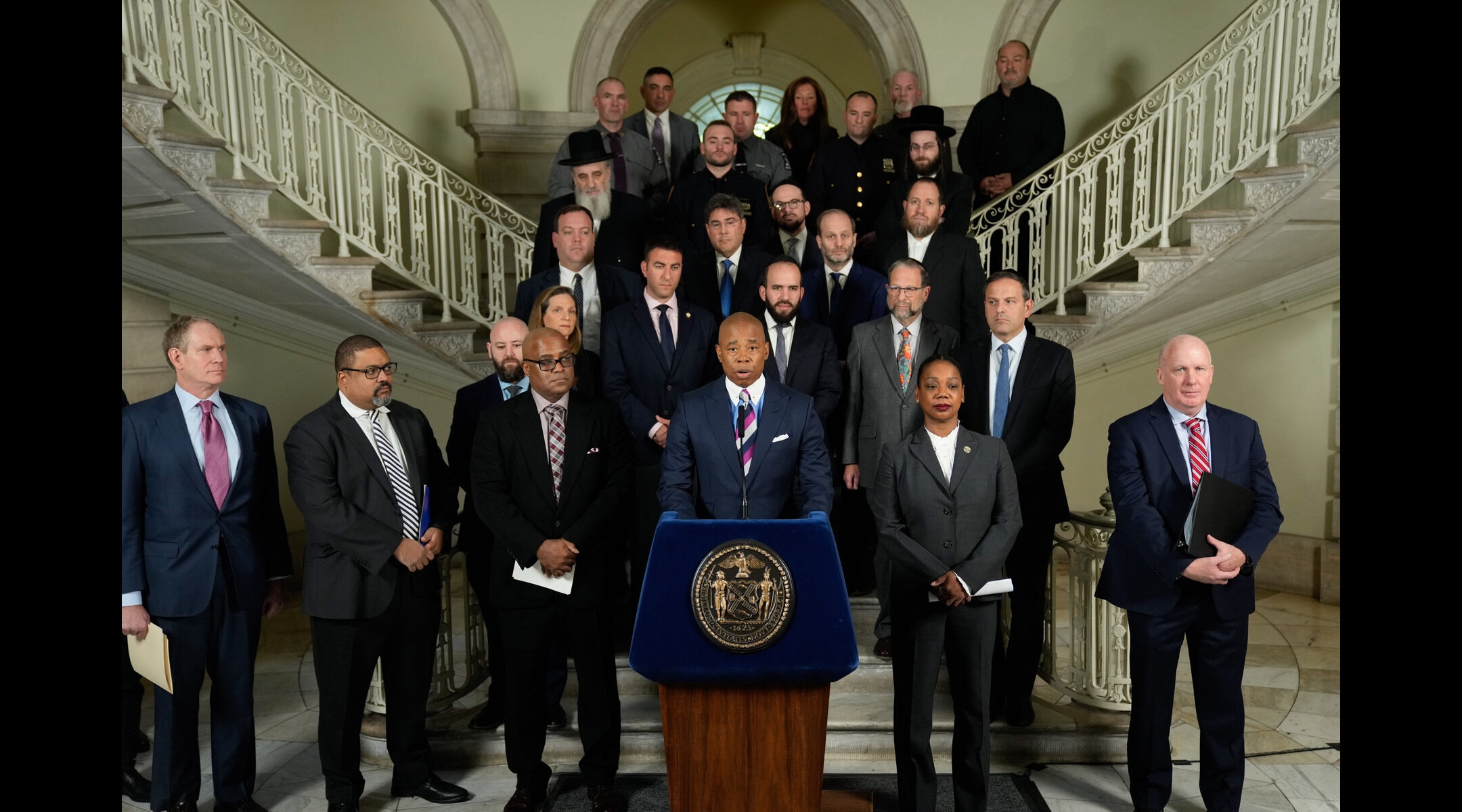 (New York Jewish Week) — As he prepares to head to Greece for a conference on antisemitism, Mayor Eric Adams met with Jewish and other interfaith leaders on Monday to discuss fighting hate in New York City.

Adams gave remarks at an Interfaith Security Council meeting, held over Zoom, to a group comprising of more than 20 faith-based organizations that share best practices on communal security, speak out against extremism and monitor the safety of faith-based communities.

The meeting came a week after two men were arrested and charged with hate crimes for planning an attack on New York synagogues, and days after members of the Black Hebrew Israelite sect marched in Brooklyn chanting antisemitic slogans.

The council was created last year by the Jewish Community Relations Council of New York, the 67th Precinct Clergy Council and the Community Security Service.

Adams “doubled down on his pledge to make sure there are resources” for communities to fight hate, Rabbi Bob Kaplan, executive director of the JCRC’s Center for Community Leadership, told the New York Jewish Week.

“He spoke about making sure that we all know how to effectively work together because this is an issue that everyone is affected by,” Kaplan said.

Kaplan said the mayor brought up an initiative called “Breaking Bread,” created in 2020, that brings together leaders and community members for community meals.

“He was doing this as [Brooklyn] borough president,” Kaplan said. “He wants to have hundreds of them around the city.”

Kaplan added that “the full breadth of faith leaders” took part in the call, including representatives from the Buddhist, Hindu, Sikh, Jewish, Christian and Muslim communities.

“We had people who are often not represented at these kinds of meetings,” Kaplan said. “It’s not just one community’s responsibility. I think that was the main mantra to come out of this.”

A portion of the meeting was dedicated to training houses of worship in applying for new security grants from the city and state.

Earlier this month, the state made $50 million available to strengthen security measures at organizations at risk of hate crimes, as well as $46 million in federal funding for 240 such organizations across the state.

“These grants are extremely important,” Kaplan said. “They can harden the necessary equipment you need, like bulletproof glass, make sure you have the right locks on the doors or equipment for surveillance to make your place safer. In some cases, paying for guards to be on duty.”

“These grants have really helped many synagogues and many houses of worships upgrade to the kinds of secure methodology that they need,” he said.

UJA-Federation of New York also announced at the meeting that it will be offering micro grants of up to $5,000 to New York organizations that are interested in fostering interfaith and intergroup relations, according to a UJA spokesperson.

Evan Bernstein, CEO of the Community Security Service, who attended the meeting, told the New York Jewish Week that the meeting shows how far the Interfaith Security Council has come since it was created in 2021. Similar groups “are created in the moment and they just meet once for the optics,” he said. “We really were serious about making this something that was consistent, ongoing and beneficial for the members. We have accomplished that.”

He added that having the mayor on the call was “a huge win” for the group. “It was a really big moment for us,” Bernstein said. “It was great that people had a chance to hear directly from the mayor in a semi-intimate setting, not just at a press conference.”

The mayor is heading to Greece Wednesday for the 2022 Mayors Summit Against Antisemitism. The second annual event is organized by the Combat Antisemitism Movement, a global coalition of 65 Jewish and interfaith organizations.

The Anti-Defamation League counted 2,717 antisemitic incidents across the country last year, a 34% increase from the previous year, and the highest since it began tracking in 1979.