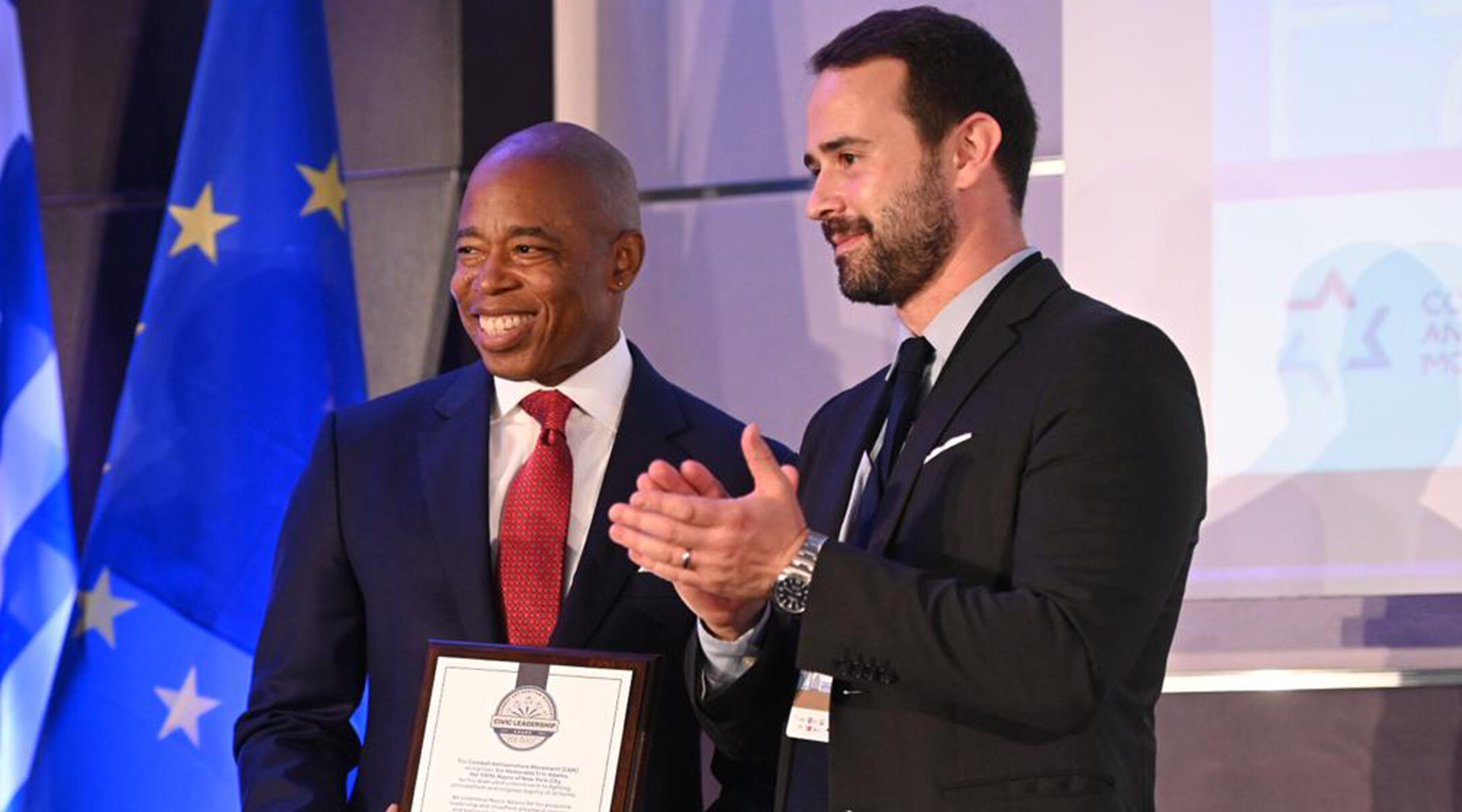 (New York Jewish Week) — Likening the growing threat of antisemitism to a frog that’s slowly boiled alive, New York City Mayor Eric Adams spoke about the dangers of hate during his speech at the Mayor’s Summit Against Antisemitism in Athens, Greece.

The two-day summit, which began Wednesday, is a gathering of more than 50 mayors and municipal leaders from across the globe. It was created in partnership with the Combat Antisemitism Movement, a global coalition of 65 Jewish and interfaith organizations; the Center for Jewish Impact, an Israeli relationship-building organization, and the Jewish Federations of North America.

“We have never had so many local and municipal leaders in one place, sharing best practices and learning from each other on how to fight Jew-hatred,” CAM CEO Sacha Roytman Dratwa said in a press release.

During the first day of the conference, Adams was presented with the CAM Civic Leadership Award for “his dedicated commitment to fighting antisemitism and religious bigotry of all forms,” according to a press release.

In a video of his acceptance speech obtained by the New York Jewish Week, Adams cited the parable of the frog — which he said he remembered as a science experiment from his school days — in which a frog would immediately jump out of water that was too hot. However, if a frog was in water and the temperature rose gradually, it “would stay there until it boils itself to death.”

“That is where we are right now with antisemitism and hate that is pervasive across not only our country in Amerrica, but across the globe,” Adams said. “The temperature is just increasing so slightly that we’ve allowed it to normalize in every part of our lives. We’ve been accustomed to it.”

In Athens, Greece on Wednesday, @NYCMayor Adams spoke about how the temperature of antisemitism is 'increasing so slightly that we've allowed it to normalize in every part of our lives.'

'We've been accustomed to it,' he said. 'It has become popular.' pic.twitter.com/eKgTjRLq6q

He also called social media “the flame that continues to fuel the hatred that you are seeing.”

“Those who hate no longer are isolated in the corners of their bedrooms or homes or in their clubs,” Adams said. “They have now combined together to create the hate that we are experiencing.”

“Those who are perpetrating hatred should not have five million followers on social media,” he added, “and those of us standing up for what’s right only have 100,000.”

Adams also shared another childhood anecdote about how he used to box as a kid. He said he would do well during training but often get beaten up in the ring. His coach told him that he leaves his “best fight” in the gym.

“This is the gym,” Adams said, referring to the room, whose audience included the mayors of Vienna, Albuquerque, Richmond and other municipal officials. “This is not the ring. The ring is on the ground in our communities.”

Adams also talked about how the Community Security Initiative, the Jewish security organization, helped lead to the arrest on Nov. 20 of two men who wanted to shoot up a synagogue in New York City.

“It was due to a Jewish organization that was monitoring the social media channels and chatter that they were able to give an early warning sign to connect with the law enforcement community,” Adams said. “That’s the coalition and coordination that we need.”

He also spoke about how his “Breaking Bread” initiative — in which people from different ethnic groups sit down for dinner together — can be used to fight hate. Adams brought the program up last week in a closed-door meeting with New York City’s Interfaith Security Council.

Referring to New York’s large Jewish population, he referred to the Big Apple as the “Tel Aviv of America.”

He added that the key to success in fighting hate “lies with the mayors.”

“Mayors are the cities,” Adams said. “We solve the national problems on the local level. This award is just the beginning of what I want to show in my accomplishmen as the mayor of the City of New York on how we fight and defeat antisemitism, and all of the anti-hate that we see in our lives now.”

On Thursday, Adams is scheduled to visit the Beth Shalom Synagogue in Athens, lay a wreath at a Holocaust memorial and meet with the city’s Chief Rabbi, Gabriel Negrin.