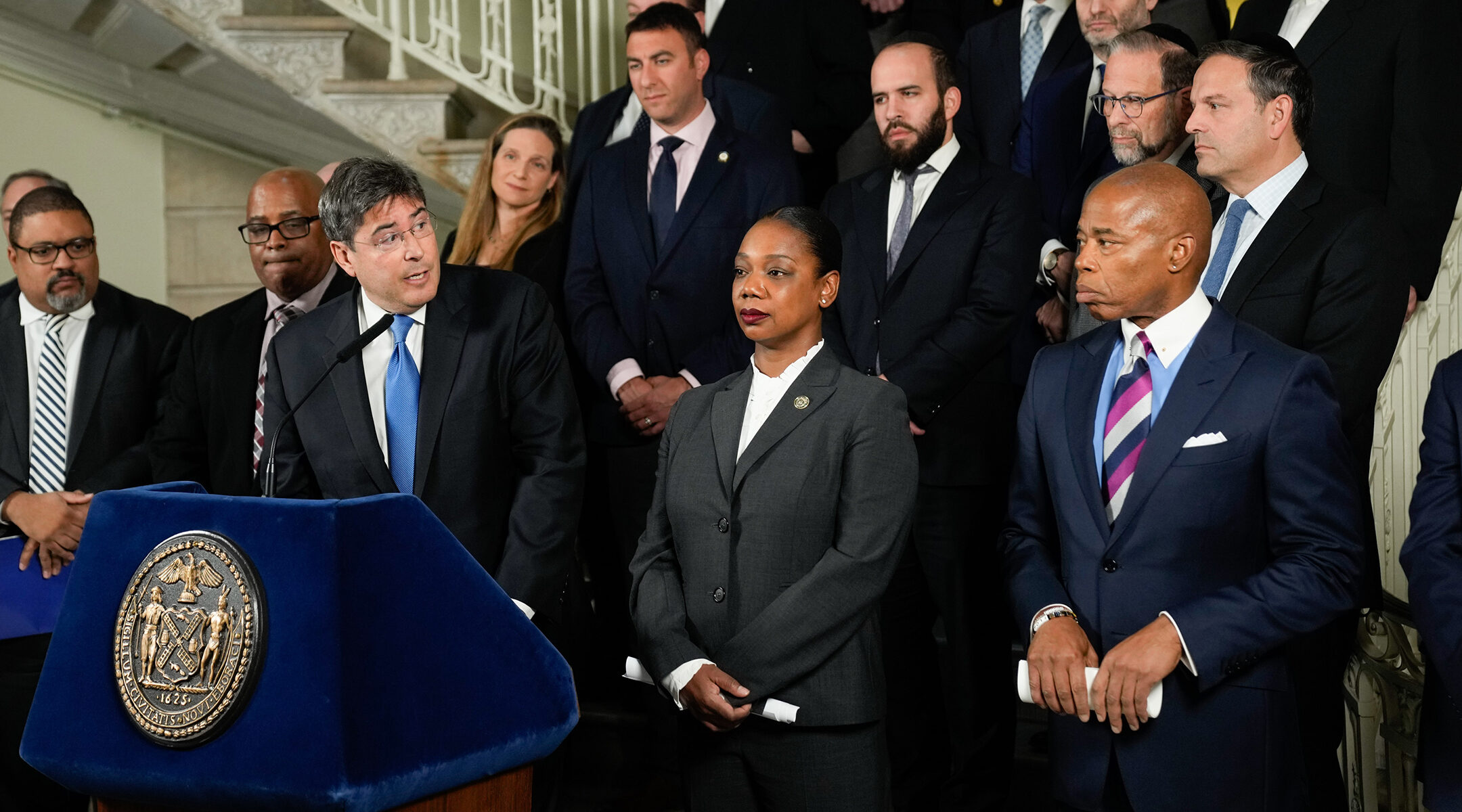 (New York Jewish Week) — A tip from a Jewish security organization helped lead to the arrest of two suspects Saturday in connection with online threats to attack a New York City synagogue.

The Community Security Initiative, a group created by UJA-Federation of New York and its affiliated Jewish Community Relations Council, discovered threatening tweets on Friday morning and brought the information to law enforcement, according to a UJA spokesperson.

In a news conference at City Hall on Monday, UJA CEO Eric Goldstein said that after they shared the lead with the New York Police Department and the Federal Bureau of Investigation, law enforcement “immediately sprung into action.”

New York City Mayor Eric Adams said during the news conference that Metropolitan Transit Authority police officers arrested the suspects — Christopher Brown, 21, of Aquebogue on eastern Long Island and Michael Mahrer, 22, of Manhattan — at Penn Station, adding that they had “an alleged plan to murder members of the Jewish community in our city.”

“This was not an idle threat,” Adams said. “This was a real threat.”

Join me, @NYPDPC Sewell and other law enforcement leaders at City Hall to discuss the efforts that stopped a potential attack on the Jewish community in New York City this past weekend. https://t.co/WyVz2qe44Q

Adams added: “Hate is on the rise in America. This hate cannot be allowed to take hold and build and gain further ground. We must reject the hate and the division that drives it.”

On Sunday, Gov. Kathy Hochul, responding to the arrest and Saturday night’s deadly shooting at an LGBTQ nightclub in Colorado, said state police would increase surveillance and protection efforts at synagogues and other vulnerable sites.

Steve Weill of Flatbush Shomrim, a Jewish community watch organization in Brooklyn, said at the press conference that he received a call on Friday night from NYPD Inspector Ritchie Taylor, an Orthodox Jew, who advised him that there was “a credible threat to the community.”

“We put a plan in place where hundreds of trained volunteers would reach all the synagogues and all the houses of worship in the areas and warn them,” Weill said.

The suspects were caught before that plan was implemented. Weill added that the Jewish community has “an unprecedented relationship” with Adams.

“The information that flows is incredible, that we can get such sensitive information and that they can have the trust in us to relay that to the community in a calm and professional manner,” Weill said.

The Daily Beast reported that the NYPD intelligence division had become aware of Brown’s tweets talking about “shooting up a synagogue and dying.” MTA police, state police, the NYPD and the FBI Joint Terrorism Task Force worked together on the investigation, according to Hochul’s office.

According to the Daily Beast, the hunt for Brown led police to an apartment on West 94th St. in Manhattan, where his acquaintance Mahrer was said to live with his parents. Neither Brown nor Mahrer were at the apartment, but detectives found a backpack with a Glock semi-automatic pistol and ammunition . In an intelligence alert, police said Brown had “a history of mental illness.”

What police described as a white supremacist Twitter group operated by Brown was taken down. After being caught, Brown was held on a weapons charge, and Mahrer was charged with illegal weapons possession. Each pleaded not guilty to state charges and are scheduled to appear in court on Nov. 23.

The New York Post reported that Mahrer is Jewish and the grandson of a Holocaust survivor.

UJA-Federation of New York and the JCRC of New York created the Community Security Initiative after the deadly attack on the Tree of Life Synagogue in Pittsburgh in 2018. CSI helps provide protection and safety training to Jews and Jewish institutions in New York City, Westchester and Long Island.

The arrests come just weeks after the FBI warned synagogues in New Jersey about a “credible threat” made to them; the NYPD heightened security at city synagogues as a precaution. The FBI later announced that a 19-year-old man who said he had sworn allegiance to ISIS had been arrested for making the threat.

The arrests also come a time of heightened anxiety about antisemitism in New York City and beyond. The NYPD has recorded an increase in the number of reported antisemitic incidents.

Meanwhile, celebrities Kanye West and Kyrie Irving have ignited concerns about antisemitism with their comments and tweets, and turmoil at Twitter has fueled a rise in hate posts, including about Jews, according to watchdogs who monitor the social media platform.