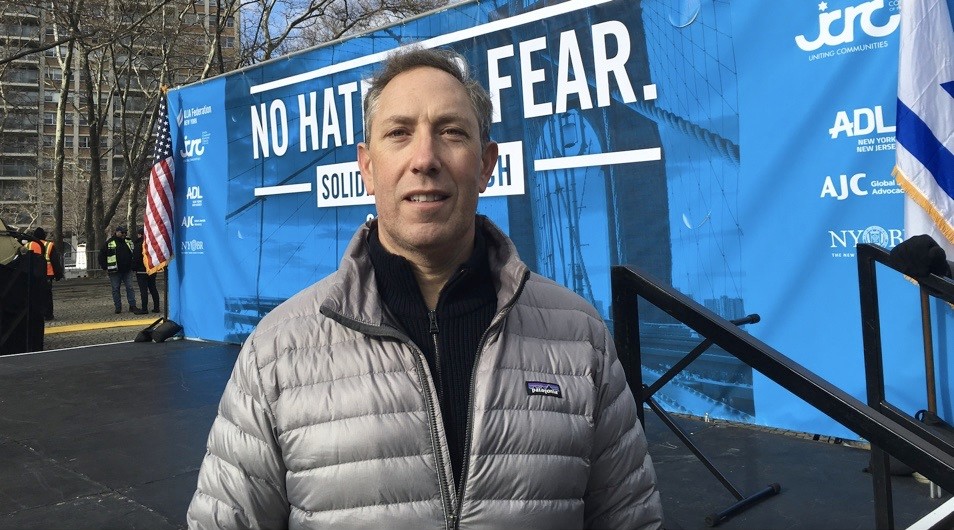 Mitchell Silber is the executive director of the Community Security Initiative of New York Jewry. (Courtesy of Silber)
Advertisement

In October 2018, intelligence analyst Mitchell Silber was in Ukraine on a job assessing security threats to Jews around Europe when the United States experienced the country’s deadliest-ever anti-Semitic attack.

A gunman forced his way into the Tree of Life synagogue in Pittsburgh, killing 11 people.

“Suddenly the problem was a lot closer to home,” said Silber, who was working as a private security consultant after serving as director of intelligence analysis for the New York City Police Department.

Not long afterward, UJA-Federation of New York and the Jewish Community Relations Council of New York announced a new $4 million plan to help secure local Jewish institutions in the region. Silber was hired as executive director to lead the effort to safeguard local Jews, the Community Security Initiative.

Since then, Silber has been leading a team of security professionals who help provide protection to Jews and Jewish institutions in New York City, Westchester and Long Island. They not only develop security infrastructure, but also conduct trainings, work with local authorities and strengthen community networks.

These days, with Jewish leaders around the country again alarmed by a sharp increase in anti-Semitic activity sparked in part by the recent conflict between Israel and Hamas in Gaza, Silber has been very busy.

We interviewed Silber recently about what he and others at the Community Security Initiative are doing to try to keep Jews safe. This conversation has been lightly edited for length and clarity.

Tell us about the last few weeks, since the outbreak of fighting in Israel and Gaza.

As has been widely reported, on the periphery of some pro-Palestinian demonstrations in Manhattan there were a number of violent and threatening acts directed at Jews, including a firecracker thrown in the Diamond District toward scores of people and an attack on a young man wearing a yarmulke who emerged from the subway.

While much of our work is done to harden targets like schools, Jewish community centers, camps and museums, here were some incidents that didn’t occur at institutions but rather at Jews who happened to be at the wrong place at the wrong time. It was street violence.

How do you guard against such incidents?

We can’t personally protect every one of the 1.5 million Jews who live in the greater New York area. However, one of our roles is to be the interlocutor with law enforcement. In the wake of these violent assaults, we had some very frank conversations —specifically with the NYPD — about resources and preparation. We felt that the violence that happened in midtown Manhattan after the May 20 protest was intolerable and could have been prevented.

That transitioned into a broader and deeper conversation on how the Community Security Initiative could be better integrated with NYPD and its deployment of services in order to more accurately direct them where we think there is a need for both protection and deterrence.

How could the violence surrounding the protests in midtown Manhattan been prevented?

You had a pro-Israel demonstration in Times Square and an unlawful pro-Palestinian counter-demonstration showed up. So just by virtue of having a demonstration that was authorized by the city, NYPD should have had significant resources there and might have anticipated that there would be violence

How did the NYPD react to your feedback?

Very positively. They acknowledged that some mistakes were made and that they would have done it differently, and they invited the Community Security Initiative to interact with their field commanders so that we might better coordinate going forward, everything from my team sharing intelligence with them to potentially directing them or pointing out places where we think additional coverage might be helpful or necessary.

Are you doing anything differently at the Jewish institutions you oversee given the rise in anti-Semitism?

During COVID, the process of implementing many of the security enhancements that we wanted to put in place slowed down — partially because some of the institutions were closed, partially because there wasn’t as much of a focus on physical security. Everyone was focused on health security.

I think now, in the wake of those two weeks of protest activity and the violence that spun off it, we are seeing a much greater level of interest in institutions making security enhancements, and they’re scrambling to get them done before the High Holidays.

What sort of security enhancements?

Hardening the doors, making more sturdy entrances, having shatterproof film on the windows, reviewing their operating procedures in case of an active shooter, discussing their security guard situation — whether they have them, where they should be, how many.

What recommendations do you have for Jewish institutions in other parts of the country?

It’s the same as I recommend for New York. They need to review their security protocol. They need to have professionals come and visit and walk through the location and think through the different scenarios — including active shooter. Use this time between now and the High Holidays in September to try and enhance security.

Do you think people will feel safe attending synagogue on the High Holidays?

I hope they do. I think there is going to be a certain level of anxiety to do much of anything after more than a year of not being in person. Plus, unfortunately, anti-Semitic violence has happened over the last year and a half, so I’m sure that is going to be in the back of those people’s minds.

Has the wave of anti-Semitic incidents ebbed since Israel and Hamas reached a cease-fire?

We have an intelligence analyst who is monitoring the deep and dark web and anti-Semitic threats against the community, and I would say that since the beginning of June the temperature and volume of hate has definitely come down.

The Community Security Initiative and the Hebrew Free Loan Society (also a partner of UJA-Federation of New York) offer interest-free bridge loans to Jewish institutions that have been awarded government security grants. How does that program work?

One of the things that complicates the enhancement of the security of a location is the funding stream. The Department of Homeland Security requires institutions to lay out the money first and then you get reimbursed. The Hebrew Free Loan Society can bridge the gap for institutions that don’t have that cash available. That eliminates a stumbling block.