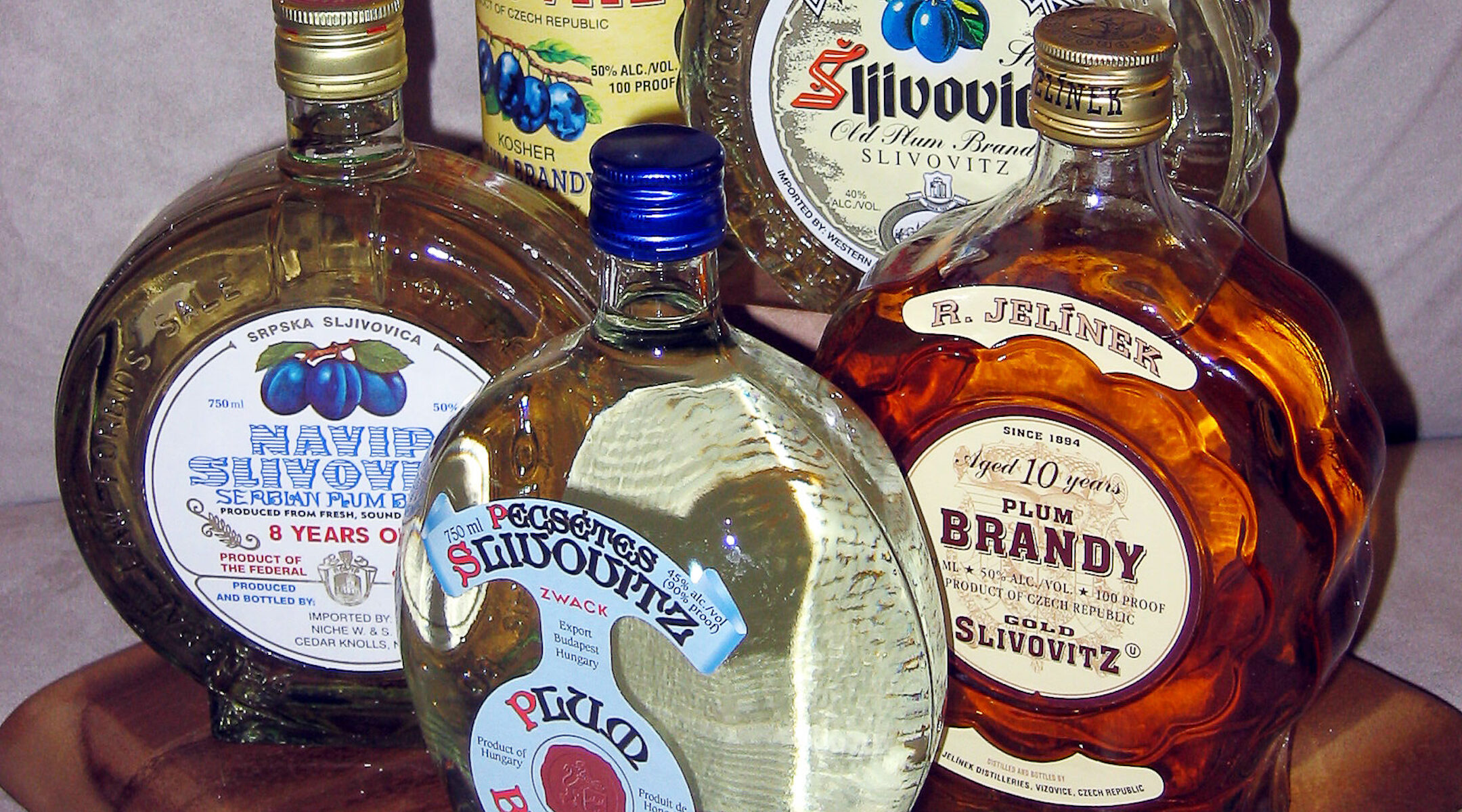 Bottles of slivovitz, some kosher, show off the varieties available of the newly UNESCO-recognized plum brandy beloved by many Jews. (Wikipedia)
Advertisement

Slivovitz, a plum brandy traditionally associated with Passover by many Ashkenazi Jews, has been added to the United Nations’ list of items with “intangible cultural heritage.”

The decision was made at UNESCO’s conference in Morocco this week where France successfully campaigned for the inclusion of the baguette on the list, a complement to the regular tally of physical sites that the agency seeks to preserve.

It wasn’t Jews leading the charge for the hard-burning brandy, but rather Serbia, where the spirit is a mainstay, as it is across much of the Balkans, Eastern and Central Europe.

That’s where Jews first got turned onto the drink, according to Martin Votruba, a Slovak studies professor whose research included the history of slivovitz and who died in 2019.

“Jews would acquire this local drink after moving into European kingdoms,” Votruba told Moment magazine in 2014. “They would simply pick it up as part of the culture.”

The spirit became particularly associated with Polish Jewry in the 19th century, as Jews became prominent in the field of alcohol production and the running of inns and taverns. They found special utility in slivovitz when it came to maintaining the Jewish laws around keeping kosher.

Unlike wine, traditional brandy and some types of vodka, being made from plums (the root “sliva” means plum in several Slavic languages) meant that slivovitz was not subject to the same stringent rules that apply to grape-based alcoholic beverages. And unlike beer, whiskey and other types of vodka, it had no wheat or other grains, so it was acceptable for consumption on Passover. It was also relatively inexpensive.

As a result, the Slow Food Foundation for Biodiversity at Italy’s University of Gastronomic Sciences wrote in a primer on the drink, “the Polish Orthodox Jews adopted the plum brandy as [their] festive spirit,” which in some cases became known in Polish as Śliwowica Paschalna or literally Passover slivovitz. 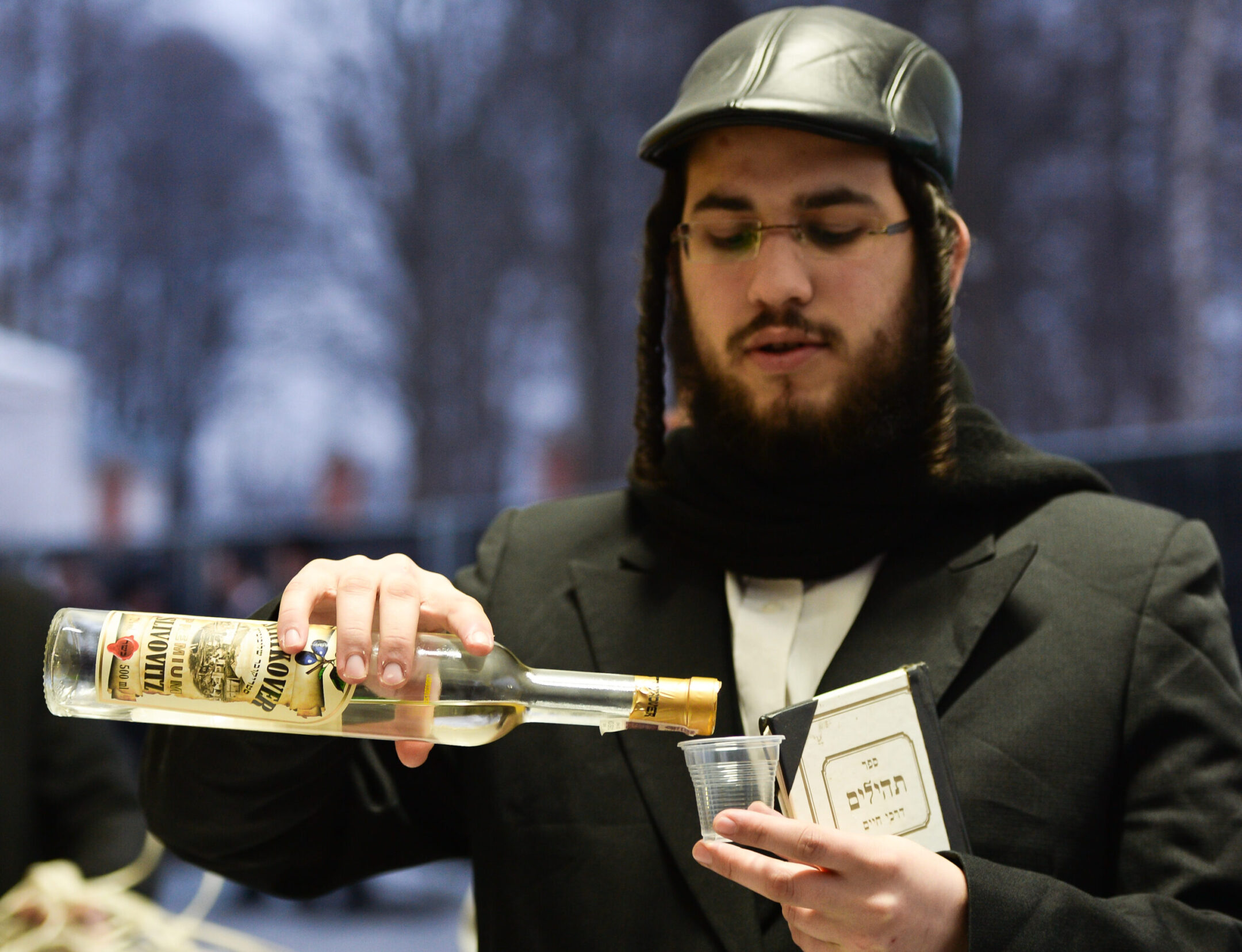 A Hasidic Jew tastes slivovitz during a 2015 pilgrimage to the grave of Tzadik Elimelech Weissblum in Poland, March 2015. (Artur Widak/NurPhoto via Getty Images)

When masses of Polish Jews arrived in America, they brought slivovitz with them, and it quickly became associated with the Jewish community. Today, much of the slivovitz sold in the United States is marketed to Jewish consumers, typically around Passover each spring.

Though its popularity has waned, it can still be found on some synagogue kiddush tables, and remains in the cultural memory of American Jewry.

Author Michael Chabon chose it as the spirit of choice for his hard drinking, Yiddish-speaking detective, Meyer Landsman in “The Yiddish Policemen’s Union,” a crime novel set in an alt-history Jewish state in Sitka, Alaska.

Meanwhile, the 1990 Barry Levinson film, “Avalon,” which tells the story of a family of Polish Jewish immigrants in the United States, presents it as the drink of choice of the main character’s father in the old country.

“He never drank water. And oh, boy, could he drink! What was that stuff called he always used to drink?” one character asks. Another answers, “Slivovitz. Slivovitz. He used to call it ‘block and fall.’ You have one drink of that, you walk one block and you fall!”

Slivovitz gradually gave way to other favored spirits as Eastern European immigrants, Jewish and otherwise, assimilated in the United States. But the drink is having a bit of a nostalgic renaissance: It’s on the menu at several swanky bars in New York City, such as the Second Avenue Deli’s Second Floor Bar & Essen, which makes Jewish themed cocktails with both Manischewitz and slivovitz, as well as Kafana, a high-end Serbian restaurant in Alphabet City.