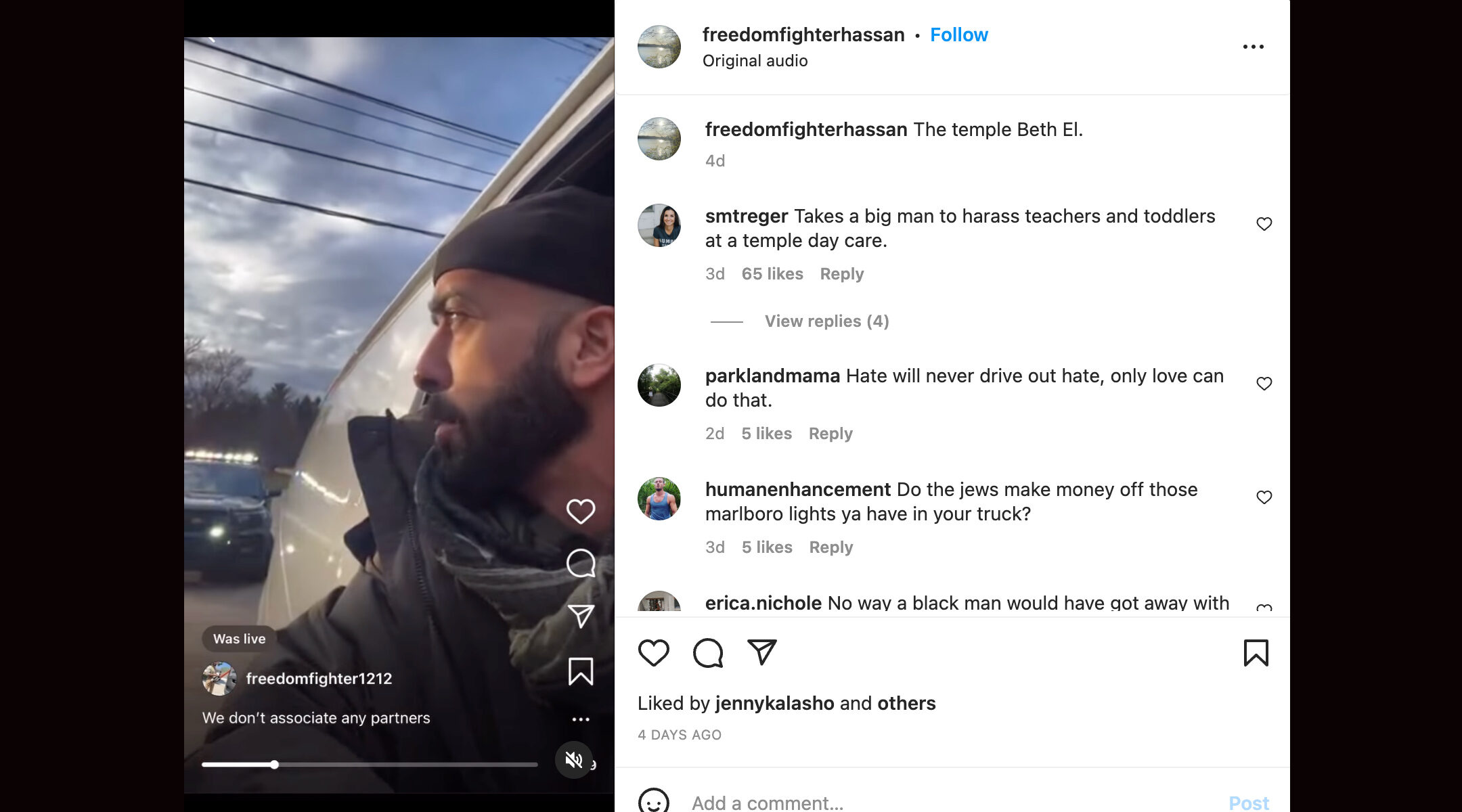 Hassan Chokr filmed the traffic stop where police questioned and released him after he left Temple Beth El in Bloomfield Hills, Michigan, where congregants alleged that he threatened them. (Screenshot from Instagram)
Advertisement

(JTA) – A Michigan man who allegedly threatened and harassed congregants at a Detroit-area synagogue uttered antisemitic slurs at the magistrate who arraigned him on Monday.

Meanwhile, the synagogue where the incident took place is planning events to help community members process both their trauma and their concern about how local police handled the incident.

Hassan Chokr, a Dearborn resident, remained in custody in Bloomfield Township after being arrested on Sunday, two days after he yelled antisemitic and anti-Israel invective outside Temple Beth El while parents were dropping off their children at its early childhood education center. After the incident drew widespread attention, including because of a video apparently filmed by Chokr of his conversation with police immediately following his departure from Beth El, he was arrested at his home and charged with two counts of ethnic intimidation.

As Magistrate Julie Nelson-Klein set a bond of $1 million for his release on Monday and outlined conditions if he is able to meet it, Chokr called her a “Jewish b—-_” and “Zionist b—-,” the Detroit Free Press reported. (Nelson-Klein is Jewish.) Court officials frequently muted Chokr, who appeared via video, as he ranted about God punishing the magistrate.

Chokr, who pleaded not guilty, had told congregants they were going to die, witnesses from Beth El reported. He also had delivered a string of profanities to families as he demanded to know whether they supported Israel, saying, “Do you support Israel? How dare you. F— Israel and Jews,” and hurled racist language at a member of the synagogue’s security staff who tried to get him to leave.

Temple Beth El Rabbi Mark Miller has been counseling families since the incident. He told the Jewish Telegraphic Agency that “there is a mixture of anger and sadness” within the congregation.

Since Chokr’s harassment of the synagogue, he said, some of the children who were present saw a white truck parked outside and asked their parents, “Is that that man again?”

Chokr’s next hearing related to his actions outside Temple Beth El is set for Dec. 15. He also has an extensive criminal record and is also in the middle of prosecution in another case, where he has been charged with assault with a dangerous weapon and assaulting or obstructing a police officer, according to the Free Press. His Instagram page, which indicates that a previous version had been removed, contains multiple videos showing him making antisemitic comments; a highlight is called “F— the Jew.”

Miller said he and others in the congregation remained concerned about how the local police had handled the incident. Police officers had initially engaged with Chokr in a friendly manner and let him go free from a traffic stop even after he said he was heading to another synagogue — behavior that was captured on video and shared online by a prominent antisemitism watchdog. He was not arrested for two days.

“I have a hard time wrapping my head around the idea that, after what this guy did and said, he shouldn’t have been immediately in custody,” Miller said. “It makes me uncomfortable.”

The Bloomfield Township Police Department has defended its actions, saying in a statement that officers had deployed tactics meant to de-escalate conflict and “were able to assess that subsequent to the traffic stop the subject would not be an imminent threat to the community.” But a top lieutenant also acknowledged that locals were unnerved by the video and the police practices it captured, telling the Free Press on Sunday, “There are some concerns about that.”

Miller said his congregants have “some residual anger at the police” because of the traffic stop video, even now that Chokr is in custody. “Whether the police process was right or wrong, it feels really bad.”

Temple Beth El plans to hold a parent forum with a trauma and resiliency expert this week. Following that, Miller said, there will be a community-wide forum about law enforcement’s response to reports of antisemitism.

Miller took stock in the fact that the Jewish community has shown “resiliency” throughout the ordeal. “The same day that this happened,” he said, “we had an incredible Shabbat with a musical guest.”