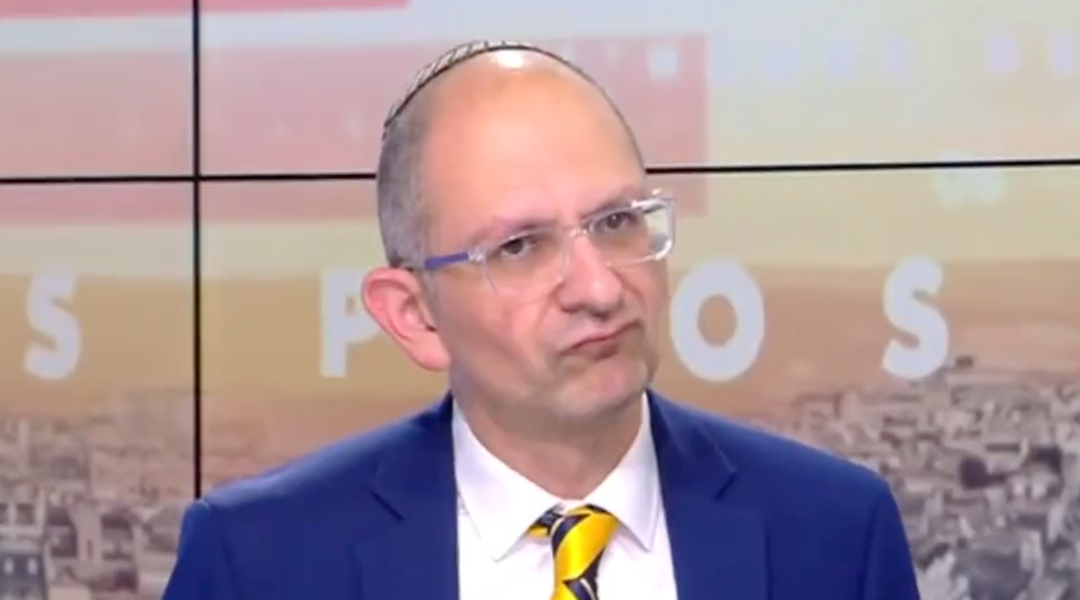 (JTA) — An Israeli professor was asked by the host of a French TV news show why he publicly identifies his religion by wearing a kippah in a clip that went viral on Wednesday.

“Many people are asking, why a professor wears a religious symbol in our studio,” the host of CNews pressed Dr. Cyrille Cohen, head of immunology at Bar Ilan University, who was invited to discuss vaccine effectiveness against the COVID-19 virus.

“For transparency, I wear it everyday, I did not put it on especially for this show,” he responded with an air of confusion.

But French-Jewish journalist Elisabeth Levy, who was also a guest on the panel, pushed further.

“You understand, don’t you, that our non-religious way of life is discrete. It’s not against religion, but you should keep your religion to yourself,” she said.

“My name is Cohen! Why would you want me to ‘keep my religion to myself’? I’m coming from Israel,” Cohen responded in exasperation.

A clip of the video drew quick condemnation on Twitter. “Is this 1930s Europe?” tweeted Israeli journalist Emily Schrader.

Though brief, the exchange illustrated the starkly different perspectives on religious expression in France, the United States and elsewhere in the western world. “Laicite,” or secularism, rather than religious freedom, is enshrined in the first article of the French constitution, which also protects the free exercise of religion. The term has long been understood to imply a strict separation between the private sphere, where religion is accepted, and the public, where it is discouraged.

Religious minorities have complained that French secularism is often gentler with displays of Christianity, than other faiths.

Since 2004, French public schools have banned all personal displays of religion, including both crosses and yarmulkes. In 2009, debate erupted after a woman was banned from swimming in a public pool while wearing a bathing suit in line with some Islamic interpretations of modesty laws. In 2016, the swimsuit nicknamed a “burkini” was banned by the mayor of Cannes, a beach town.

French Jews also came up against the government’s strict adherence to laicite when a hearing in the trial of suspects involved in the 2015 shooting at a Paris Kosher supermarket, which killed four Jews, was scheduled on Yom Kippur. The French judiciary refused to change the date after requests by the families of the victims, citing laicite.