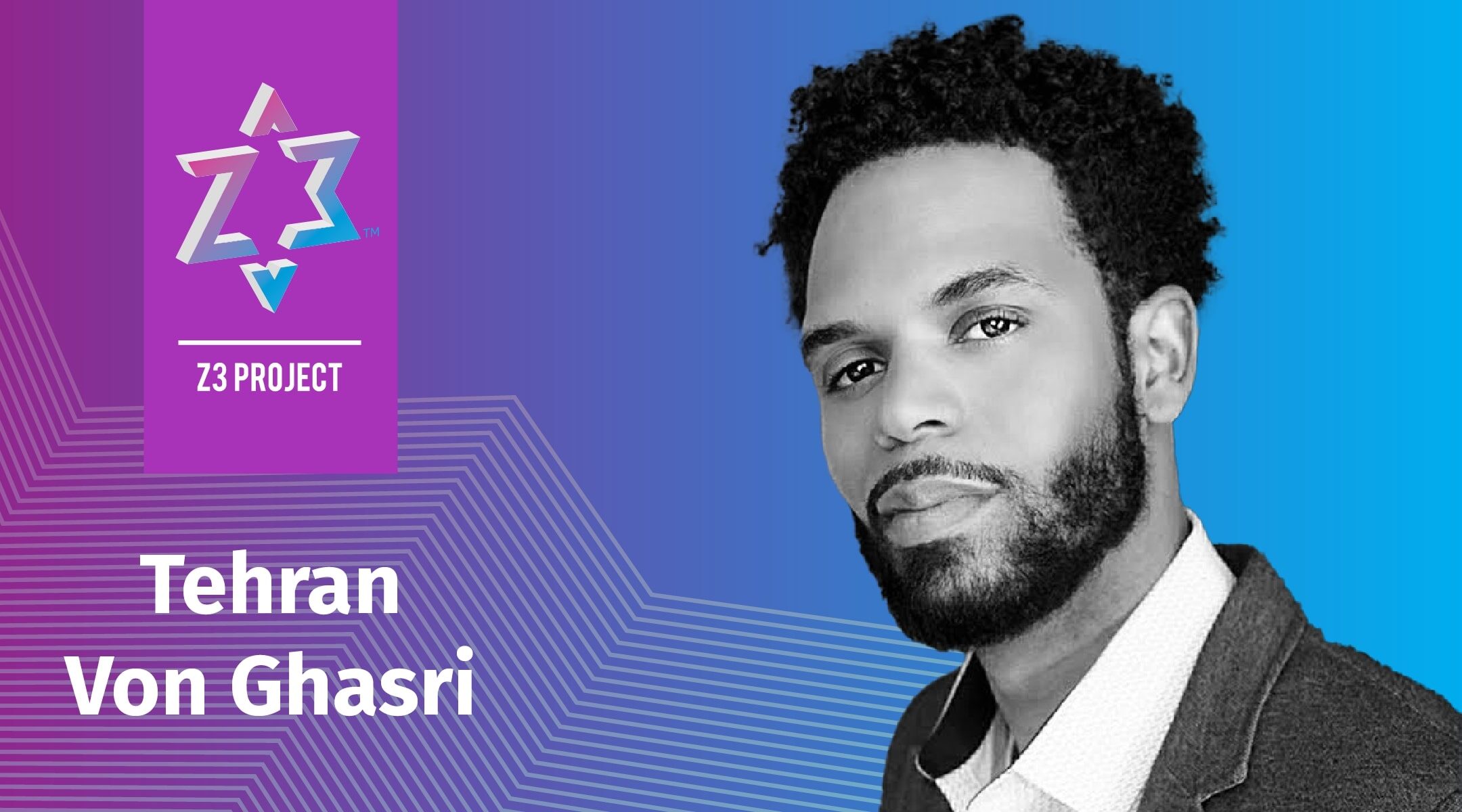 Tehran Von Ghasri is the son of an Iranian-Jewish immigrant father and an African-American mother. (Courtesy of the Z3 Project)
Advertisement

For an American Jewish comedian, Tehran Von Ghasri has an interesting story to tell, as his name suggests. The son of an Iranian-Jewish immigrant father and an African-American mother, Tehran’s heritage includes a mix of Jewish, Christian, Muslim and Zoroastrian, and any part of that mix is fair game for Von Ghasri’s standup.

Yet despite Von Ghasri’s many identities, he has a strong sense of self. In our interview, he discusses how young Jews can also navigate through their own multiple identities and come out stronger.

You juggle so many identities. You’re African-American, you’re Jewish, you’re Persian. How do you think of yourself on any given day?

I don’t think about it often because it’s just a natural part of who I am. Everyone else thinks about it way more than I do. I don’t realize that I’m black or Persian or Jewish or not. I just think of myself as a human being. My family’s mixed ethnicities and race and religion becomes a Venn diagram and I’m stuck in the middle. People often ask me things like, “What religion are you?” Very rarely do they ever ask me if I’m just a good person. There are times when it’s almost as if some people don’t see you as black enough. Some people don’t see you as Persian enough. Some people don’t see you as Jewish enough. And the only thing I simply remind myself is that I’m always enough because I’m just always me.

One other thing that you are is a comedian. But some comedians have found themselves in trouble recently because they perpetuate tropes or stereotypes. Does comedy really need to deal in stereotypes of Jews or African Americans?

When the comedians that you’re mentioning get in trouble, it’s honestly not because they perpetuate stereotypes but because they reach for the low-hanging fruit. They use the stereotype in a very negative way. There’s a way to do comedy where you have fun with people. You don’t make fun of people. And there’s a big difference there. Maybe because I have such a unique, diverse background, when I say something, it comes from such a good place that people usually tend not to get offended. They understand I’m speaking about me. And I push the absurdity, so you realize how silly they often are. But pushing these stereotypes? That’s not funny anymore. Boxes are meant for things and not people. Let’s expand, let’s grow.

Let’s talk about one of your identities, which is African-American. There was a time when African Americans and Jews worked together in the struggle for civil rights. Are those days gone? Or is it just that some of the more divisive voices are finding a platform?

What we see is this loud minority who speaks up as if they’re speaking on behalf of everyone else. And it happens all the time. It’s usually the good people who just stay silent. We need to speak up; we need to show that the black and Jewish communities still very much work together. In the ’60s, Martin Luther King was standing side by side with a rabbi. That’s how it worked. Somewhere along the line, we were privileged enough to not think that anymore; we became a little bit divisive. I think future generations are going to be much different. I think that there’s a new generation coming up that’s realizing we all have way more in common.

What about the Jewish part of you? Where is that in your life?

It’s part of me in every way simply because it is a part of who I am. It’s a part of how I grew up. And that’s why it’s so hard to define. I didn’t see it as if it was something I was, for example, programmed to do or was being written into my life. It just became a blanket of things that were. But the biggest thing that my family taught me was respect. It was one of the things of being diverse, that they respected all the parts of me. And they didn’t define one as better or worse.

The Z3 conference is focused on creating a positive Jewish identity. In light of the current rise in antisemitism, how do we achieve this?

There are 15 million Jews in the entire world. Most people, when you go past New York or the West Coast, they haven’t even seen a Jewish person. So, it’s easy to point at the unknown boogeyman. I think that goes to education. When you know better, you do better. For example, Americans who have traveled outside of the United States have a tendency to be way less racist, way less antisemitic.

You have a strong sense of identity. But there are a lot of Jews on campus now who are dealing with issues like taking blame for the Israeli-Palestinian conflict or assumptions about wealth. What’s your advice to Jewish kids in college?

My advice to all the kids in college is to be proud of who you are. Being proud and having pride are two different things. Pride is part of the fall. Having pride means I think I’m good, but you’re bad. But being proud means, “I think I’m good and you can be good as well.” Be proud of who you are, never hide that identity. The fact that this is happening in college institutions is even more sad because that’s where we’re supposed to be enlightened and learn. So, get out there and be part of the outreach. Get to know people, and that’s how we will grow and know the rest of the world. We will make it better. But don’t let the antisemitic bullies bully you. And there should be nothing anti-Palestinian about being pro-Israeli, and there should be nothing anti-Israeli about being pro-Palestinian. If anyone has a conversation with me where they hate the other in favor of one, then already we’ve started off on the wrong foot.

What do you plan on talking about at the Z3 conference?

I’m going to be speaking on my personal experiences of intersectionality and how that plays into the history of Jews, especially Jewish people of color, and we have to remember how important a role we continue to play in the identity of Judaism and what it means for the diversity of Judaism. Because Jewish isn’t just a religion, it’s also an ethnicity and race. And that race, by the way, encompasses people of so many different shades and different looks and different ethnicities. Ultimately, we’re also going to be exploring how comedy plays a huge part in that. Who has taught us more about politics in the last twenty years other than comedians — whether it’s Jon Stewart or Trevor Noah? Who has made us think about race in different ways more than Dave Chappelle, for example, or Wanda Sykes? Who has been the face of Jewish identity more than Larry David? I just want people to realize that, honestly, we’re all in this together. That’s the biggest thing that we can push out no matter what your background is, what your religion is, whoever you are—we are all in this together.