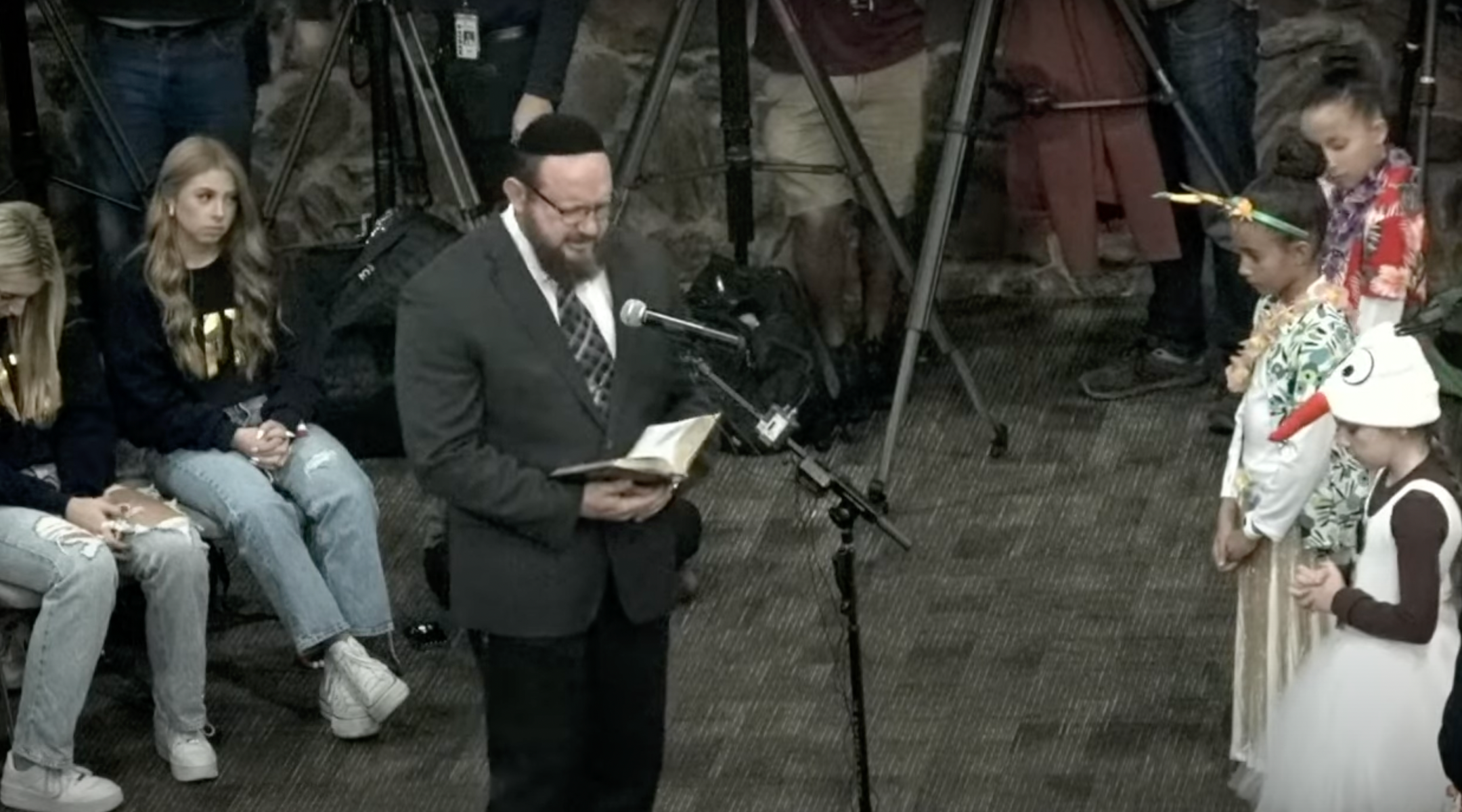 (JTA) – On Monday, the board of Keller Independent School District in Texas introduced that evening’s prayer leader as “Rabbi Griffin.”

A man wearing a suit and kippah then approached the podium and recited the priestly blessing in Hebrew. “Grant us, Adonai, your mind tonight so we can be a blessing to our community, to our children,” he continued. “Bring ‘Shalom,’ nothing missing, nothing broken, to this meeting tonight.”

But this was not an ordinary rabbi, nor an ordinary school board meeting. Keller is the district that, earlier this year, had ordered its libraries to remove all copies of a 2018 graphic novel adaptation of Anne Frank’s diary from shelves. And “Rabbi Griffin” is Mark Aaron Griffin, a Messianic Jew who last year was charged with multiple counts of sexual assault.

“Last night we were shocked but excited when we saw a man who said he was a rabbi come up to pray,” Laney Hawes, a parent in the Keller district who regularly sounds off about the board’s policies, told the Jewish Telegraphic Agency. But, she said, “a quick Google search” revealed Griffin’s true identity.

Griffin, who heads a congregation in nearby Saginaw, Texas, that blends Christian beliefs and Jewish practices, is currently awaiting trial on four counts of sexual assault. According to reports of the indictment, he is accused of using his stature as a “rabbi” to sexually assault a woman in March 2020 after coercing her to become his “concubine” and citing Abraham and Jacob as examples of spiritual figures who enjoyed multiple partners. The victim claimed she had been assaulted in Griffin’s congregation, including in his office, which DNA samples seemed to corroborate, a warrant said.

“After the December 12 Board Meeting, we were made aware of criminal allegations against the individual that a local congregation sent to offer a prayer,” a spokesperson for the district told JTA days after this story was first published. Noting that Griffin had previously worked as a local sheriff’s chaplain, the statement continued, “The prayer was offered without incident.”

The district had ordered the removal of “Anne Frank’s Diary: The Graphic Adaptation” this summer, resurrecting a months-old parental challenge to the book following a new school board election. The new board then launched an effort to revise its policies around book challenges and bans — which have become a major rallying cry among right-wing parent activists in public schools.

Griffin’s congregation, Sar Shalom Synagogue, says its adheres to “Yeshua Centered Judaism,” using a Hebrew name for Jesus. Mainstream Jewish denominations consider the movement to be Christian and hostile to traditional Jewish beliefs, although Messianic Jews often advertise themselves using Jewish signifiers: On its website, Sar Shalom (which identifies “Rabbi Aaron” as its founder) claims to have “the very first kosher mikvah [or Jewish ritual bath] built for a Jewish community centered on Messiah Yeshua in modern history.”

Keller’s board reportedly began its opening convocation policy after its most recent members, several of whom were backed by right-wing groups, were elected in May. According to Hawes, they have never invited spiritual leaders from non-Christian faiths to lead the convocation.

“We then realized why the school board was letting [Griffin] pray, because he was praying to Jesus,” Hawes said. Keller ISD told JTA that the board’s prayer sessions are “pursuant to constitutional law.”

Hawes claimed that after the meeting, she asked two board members if they had known about Griffin’s indictments, and that their response was that he had not yet been convicted.

Hawes also said she asked the board “why they weren’t allowing members of other faiths and beliefs to participate” in the opening prayer, and said she was told that the prayer was intended only for the school board trustees, who all believe in Jesus. (The Keller statement concludes, “While we respect the judicial process and an individual’s presumption of innocence, we will also continue our efforts to ensure that the values of the Keller ISD community are well represented by scheduled speakers at Board Meetings.”)

Later at the same meeting, a Jewish student at Keller High School spoke out against what she said were “rather offensive and antisemitic comments” she received after wearing a Hanukkah sweater to her school’s Ugly Sweater Day.

“Unfortunately, these incidents will only become more common with minority students of diverse backgrounds when you actively seek their removal in educational settings,” the student, who identified herself as Allison Perlman, said while holding a “Nazis Banned Books” sign, accusing the board of “removing all possible books and curricula that don’t align with your narrow-minded Christian nationalist views.”