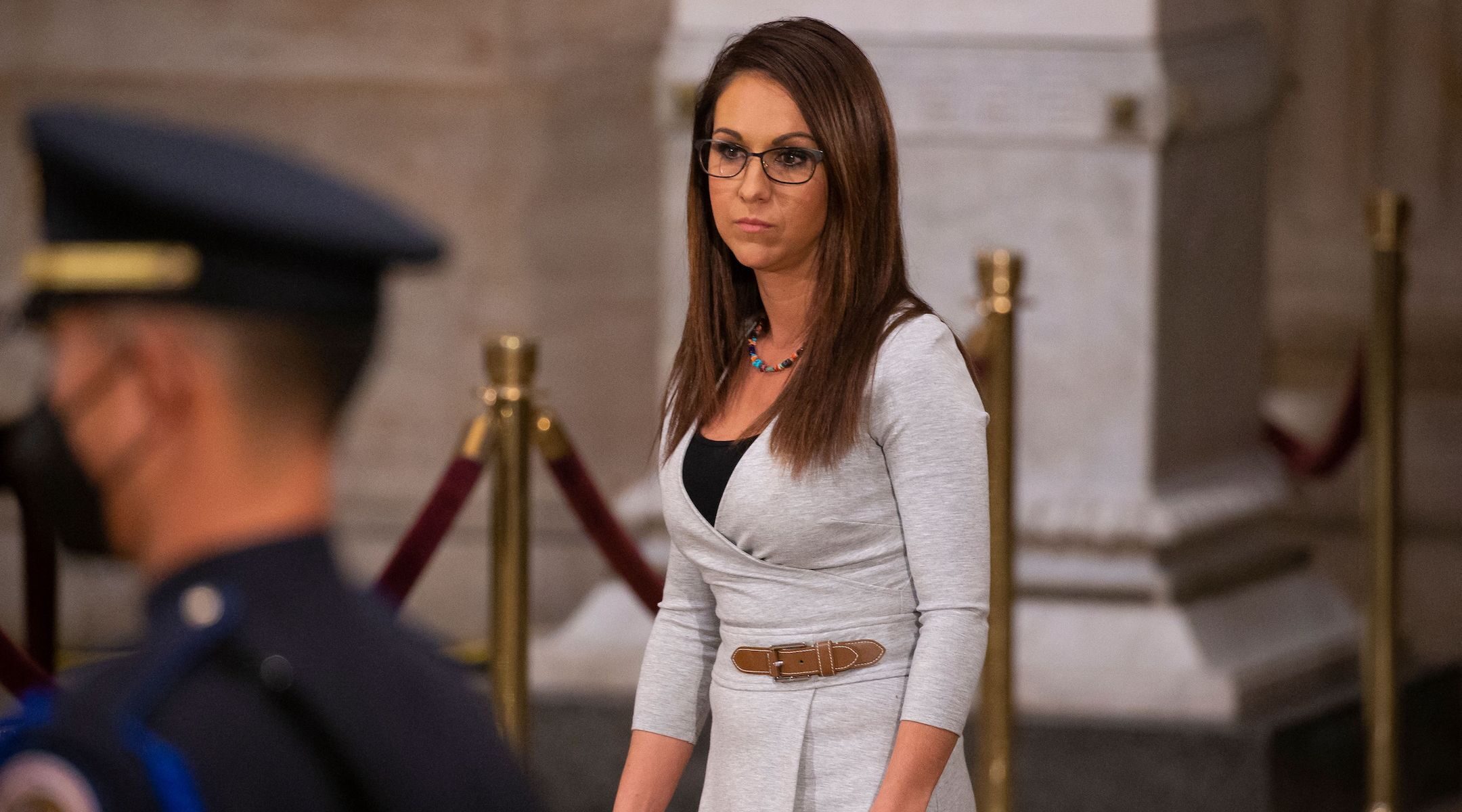 Rep. Lauren Boebert pays her respects at the casket of Bob Dole in the Capitol rotunda, Dec. 9, 2021. (Michael Reynolds/Pool/AFP via Getty Images)
Advertisement

(JTA) – Rep. Lauren Boebert is aligned with Rep. Marjorie Taylor Greene on many issues. Both are right-wing Republican members of Congress who fervently embrace conspiracy theories and joined together in heckling President Biden during his State of the Union address.

But when Boebert wanted to distance herself from Greene over their endorsements for the next speaker of the House, she pulled out an old chestnut: “Jewish space lasers.”

“I don’t believe in this,” Boebert, who represents a district in Colorado, told conservative media personality Charlie Kirk at his PAC conference in Phoenix Monday, referring to Greene’s endorsement of Republican stalwart Kevin McCarthy for House speaker. “Just like I don’t believe in Russian space lasers, Jewish space lasers, all of this.”

The phrase, a clear potshot at Greene, has dogged her ever since she was revealed to have posted Facebook screeds in 2018 implying that a company owned by the Rothschilds, the wealthy Jewish banking family, had started a California wildfire from space. Although the Geogia congresswoman has insisted she never uttered those exact words, her Rothschild comment was just one of her several brushes with antisemitism, which have also included an embrace of the QAnon conspiracy theory and likening Biden to Hitler. Her beliefs have earned her scorn from figures on both sides of the aisle, as well as widespread condemnation from the Jewish community.

Boebert, who last month won re-election by only a few hundred votes, dabbles in her own share of conspiracy theories and inflammatory language with antisemitic undertones. Last year she heckled a group of Jewish visitors to the U.S. Capitol and compared America’s vaccination efforts to Nazi Germany — a move that should have endeared her to Greene, who did the same thing. But Boebert does not support McCarthy’s speaker bid, and wanted to chide Greene for breaking from a caucus of like-minded right-wingers calling for a new face at the top.

In response, Greene struck back at her Colorado colleague. Boebert “childishly threw me under the bus for a cheap sound bite,” Greene tweeted Monday, referring to the swipe as “high school drama.” (Greene accompanied this declaration with a clip of Boebert’s “Jewish space lasers” comment, leaving no doubt as to what had incensed her.)

The two have also been at odds over Greene’s embrace of white nationalist groups, with Boebert getting into a shouting match with her colleague earlier this year over Greene’s appearance at an event organized by prominent antisemite Nick Fuentes. Another Republican member of Congress, Paul Gosar, also appeared at the Fuentes event.