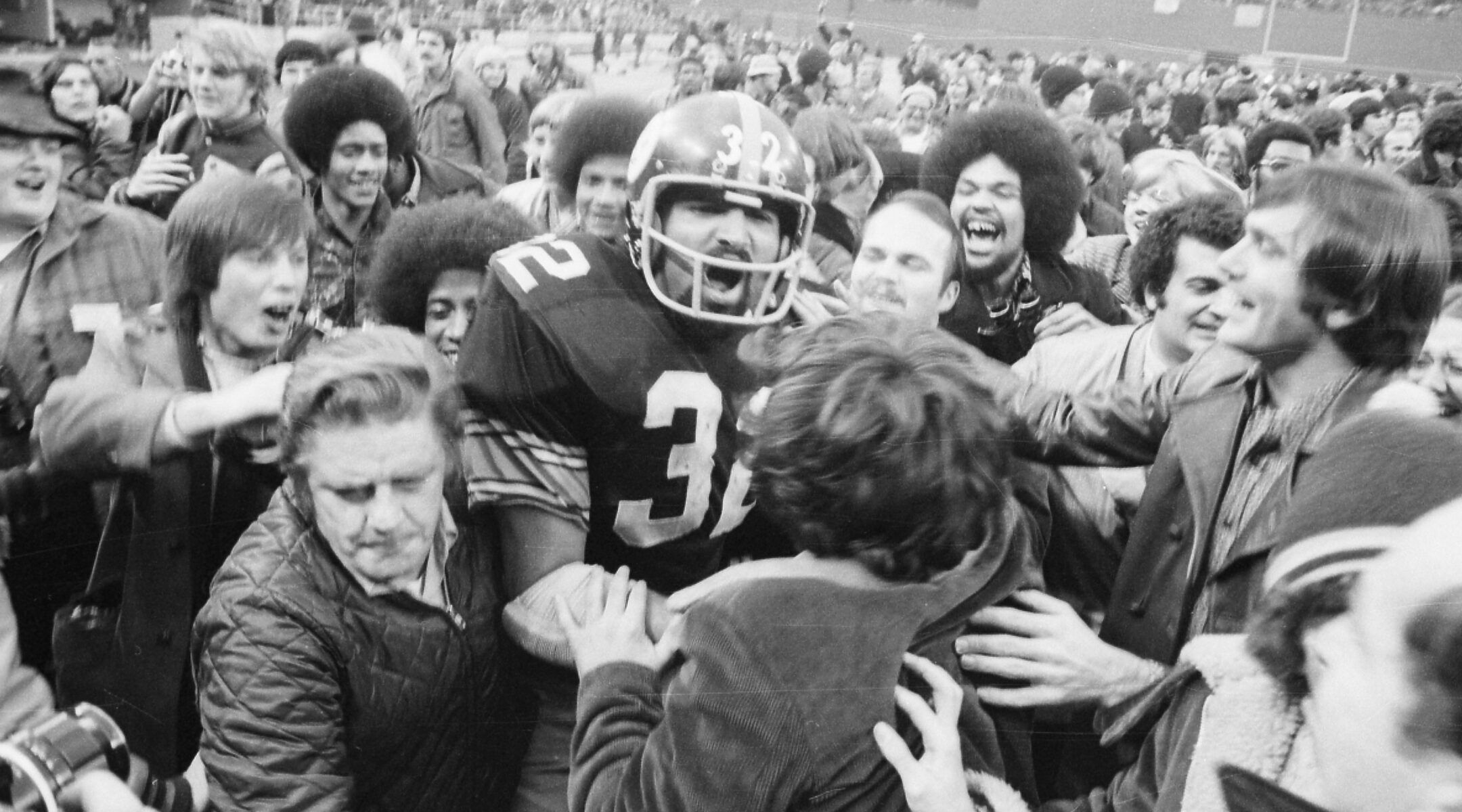 (JTA) — For many Jewish sports fans, major moments in sports history and Jewish milestones are entwined in memory. The Jewish Sport Report, the Jewish Telegraphic Agency’s weekly sports newsletter, is one place where those memories can be explored.

Today, we’re bringing you a recollection by David Eisner connected to Franco Harris, who died Tuesday — three days before the 50th anniversary of a historic catch he made as a Pittsburgh Steelers running back. Long before Eisner was an assistant secretary in the U.S. Treasury, where he worked from from 2018 to 2021, he was the football-obsessed older brother of a boy whose bar mitzvah fell on the same day as a Steelers playoff game.

Here’s what Eisner, who previously served as president of 70 Faces Media, JTA’s parent company, told us about the day that sports fans know as the date of football’s “Immaculate Reception” — a Christmas-season pun on Harris’ feat.

This week was bittersweet for football fans, but especially for Pittsburgh Steeler fans. Legendary Steeler running-back Franco Harris passed away on Tuesday, and Friday marks the 50th anniversary of Franco’s Immaculate Reception, the play that the NFL designated the greatest in its 80-year history.

I was lucky enough to be at Three Rivers Stadium in my hometown 50 years ago to see the game on the afternoon of December 23, 1972.  But my memory of the game — and the catch — are only one of many from that weekend.

First, it was the Steelers’ first playoff appearance in the team’s long (40-year) history. One of the original franchises in the NFL, the Steelers had been, for most of the years since 1932, one of the league’s worst — they had never before reached the playoffs. So, for long-suffering Steeler fans, and especially for longtime season-ticket holders like my family, this game was a very special event.

Game day was also a very special occasion for my family. It was the day of my brother Ken’s bar mitzvah at the Conservative synagogue we attended in Pittsburgh, Beth Shalom. Ken did a great job leading shacharit, the preliminary prayers, and reciting his haftarah. I am sure that no 13-year old ever had to manage the clock with the precision Ken demonstrated that day; there were more than a few in attendance who were keeping close watch, given the 1 p.m. game time.  And, no question, more than one attendee prayed harder for a Steeler miracle than they had ever prayed before.

My father was able to obtain extra tickets for the game from his friend and client, Jack McGinley, brother-in-law of the Steelers’ founding owner, Art Rooney. So immediately following services, a dozen or so male family members (and probably one-third of the rest of the synagogue) had a quick kiddush and headed to the stadium. “Lucky” Ken got to stay behind for lunch with the “ladies,” glued to his radio as home games were then blacked out on television.

One of the reasons Ken has ascribed for his all-star performance that day was the autograph of (none other than) Franco Harris that I slipped into his hand before services. I had obtained that autograph the day before when my father and I went to the airport to greet some out-of-town family and met Harris there; he was there to meet his parents, and graciously penned his signature for us.

I must admit that my memory of the play exists mostly from the 1,000 times I have watched replays. I suspect that, like me, most fans in the stadium that day looked down in disappointment when Raider Jack Tatum violently knocked the ball away from Steeler John “Frenchy” Fuqua and missed seeing Harris’ miracle catch live. I will never forget the joy I felt, however, as I watched Franco sprint into the end zone for the Steeler win, and the excitement we felt when my cousin Cary and I stormed the field with thousands of others to embrace Franco and the other players as they celebrated the victory.

This week, however, as we celebrate the 50th anniversary of Ken’s bar mitzvah, we mourn the loss of the great football player — and man — who turned a special day for our family into a sports history day for the ages. May the memory of Franco Harris be for a blessing. 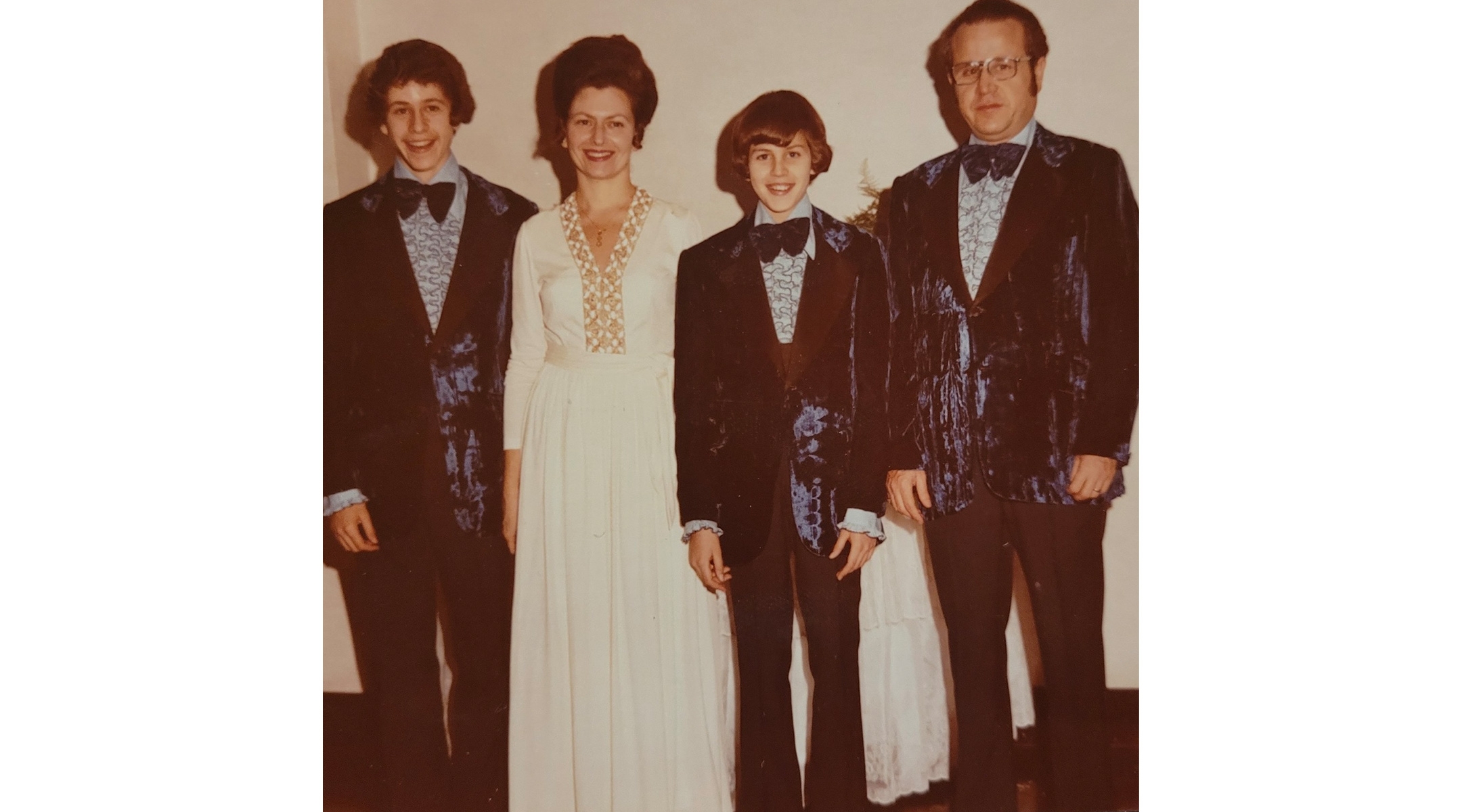 From left to right: David Eisner, his mother Sarita, his younger brother Ken and his father Milton, at Ken’s bar mitzvah. (Courtesy of Ken Eisner)

One interesting side note: The “Immaculate Reception” pun was first uttered on air by a Jewish sportscaster, Myron Cope, who added color to Steelers broadcasts for 35 years. Cope, whose last name was actually Kopelman, was the first football announcer inducted into the National Sports Hall of Fame; his catchphrases included some drawn from Yiddish, including “feh!” and “yoi!”

But Cope did not coin the phrase: A woman called him after the catch but before his broadcast to suggest it, and he credited her by name on air, noting that she was Christian. The woman, Sharon Levosky, was in fact a Presbyterian, but she said many people mistook her for being Jewish because of her last name and recalled more than 20 years ago that Cope had not asked about her religion.

Want to share your own Jewish sports story? Email us at sports@jta.org — and sign up for the Jewish Sport Report, if you haven’t already, to make sure you don’t miss a memory.