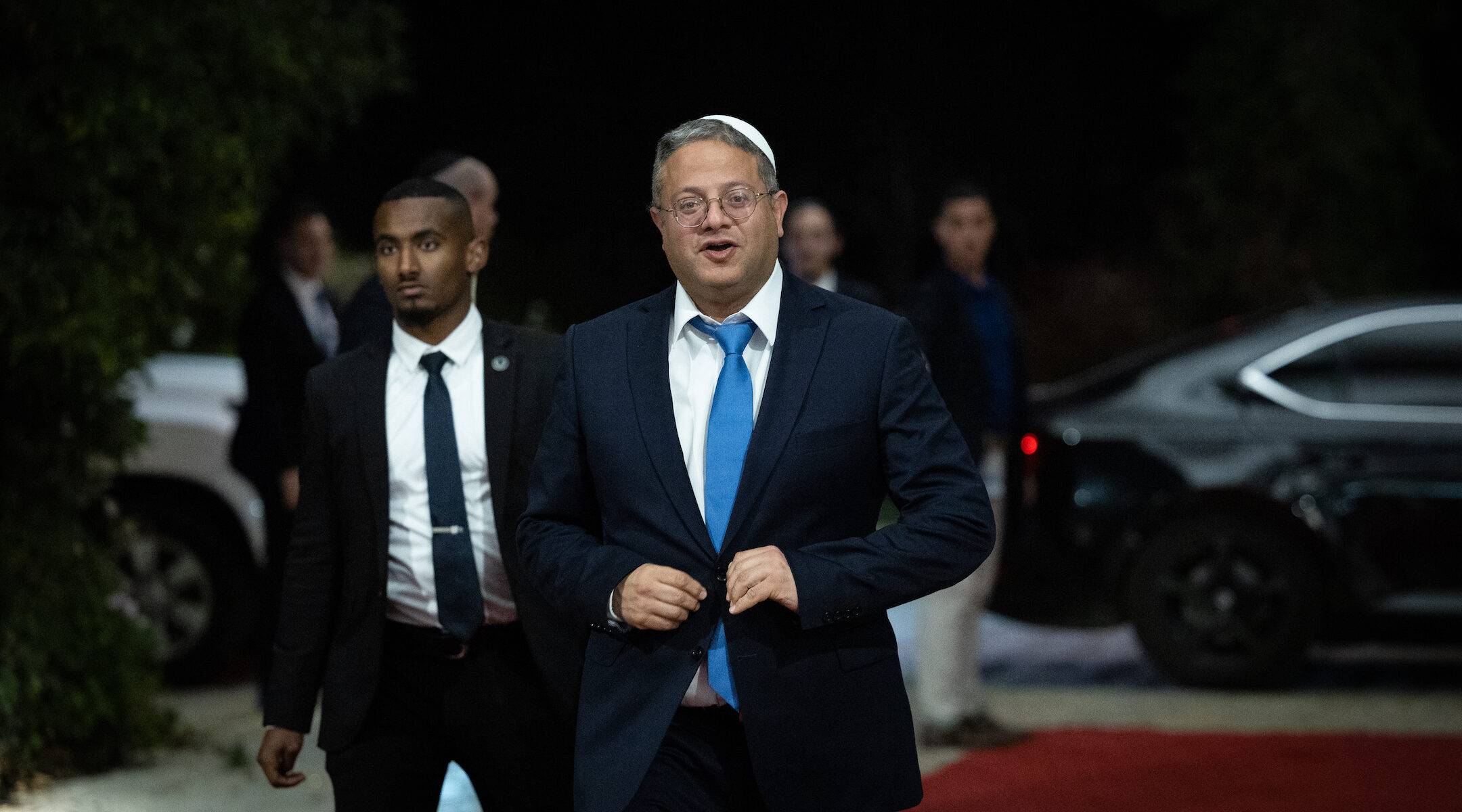 Itamar Ben-Gvir, Israel's minister of national security, arrives for a group picture of the new government at the president's residence in Jerusalem, Dec. 29, 2022. (Yonatan Sindel/Flash90)
Advertisement

The visit to the site, considered the holiest in Judaism and the third-holiest in Islam, was treated as a provocation by the Palestinians and by the Israeli political opposition. Jordan, which considers itself a caretaker of the Al-Aqsa Mosque on the site, accused Ben-Gvir of “storming” the Temple Mount, which has been a longtime flashpoint in Israeli-Palestinian tensions.

Ben-Gvir believes that a “status quo” allowing Jews to visit the site during limited periods but not to pray openly there should be changed to give Jews more access, but he reportedly adhered to the rules during his visit Tuesday.

The visit came shortly after Ben-Gvir said he would continue to visit the site after being sworn in as a high-level minister in Netanyahu’s cabinet, a breakthrough position for him and the Religious Zionist bloc he represents.

“The Temple Mount is open to everyone and if Hamas thinks that if it threatens me, it will deter me,” Ben-Gvir tweeted alongside a picture of himself with security forces. “Let them understand that times have changed.”

Reports in Israeli media on Monday had initially said Ben-Gvir would delay his first visit as internal security minister, which gives him authority over Israel’s police, following the urging of Netanyahu and others.

A visit to the Temple Mount by then-Prime Minister Ariel Sharon in 2000 triggered riots that became the Second Intifada, and Ben-Gvir’s eagerness to visit during periods of unease has fueled criticism of him as a “pyromanic” in Israeli-Palestinian tensions.

Yair Lapid, whom Netanyahu displaced as prime minister, had urged Ben-Gvir and others not to visit the Temple Mount, saying, “People will die” if Ben-Gvir provoked violence there.

Afterwards, the foreign ministry of Jordan, which sees itself a caretaker of the mosque, issued a statement that condemned the visit “in the strongest terms.” The Palestinian Authority called it an “unprecedented provocation.”

Officials with the United States, France and the United Kingdom all issued statements, publicly and to Israeli media, emphasizing the importance of maintaining the status quo when it comes to holy sites in Jerusalem. “It is important that all actors avoid actions at those sites that inflame tensions,” tweeted Neil Wigan, the United Kingdom’s ambassador to Israel.