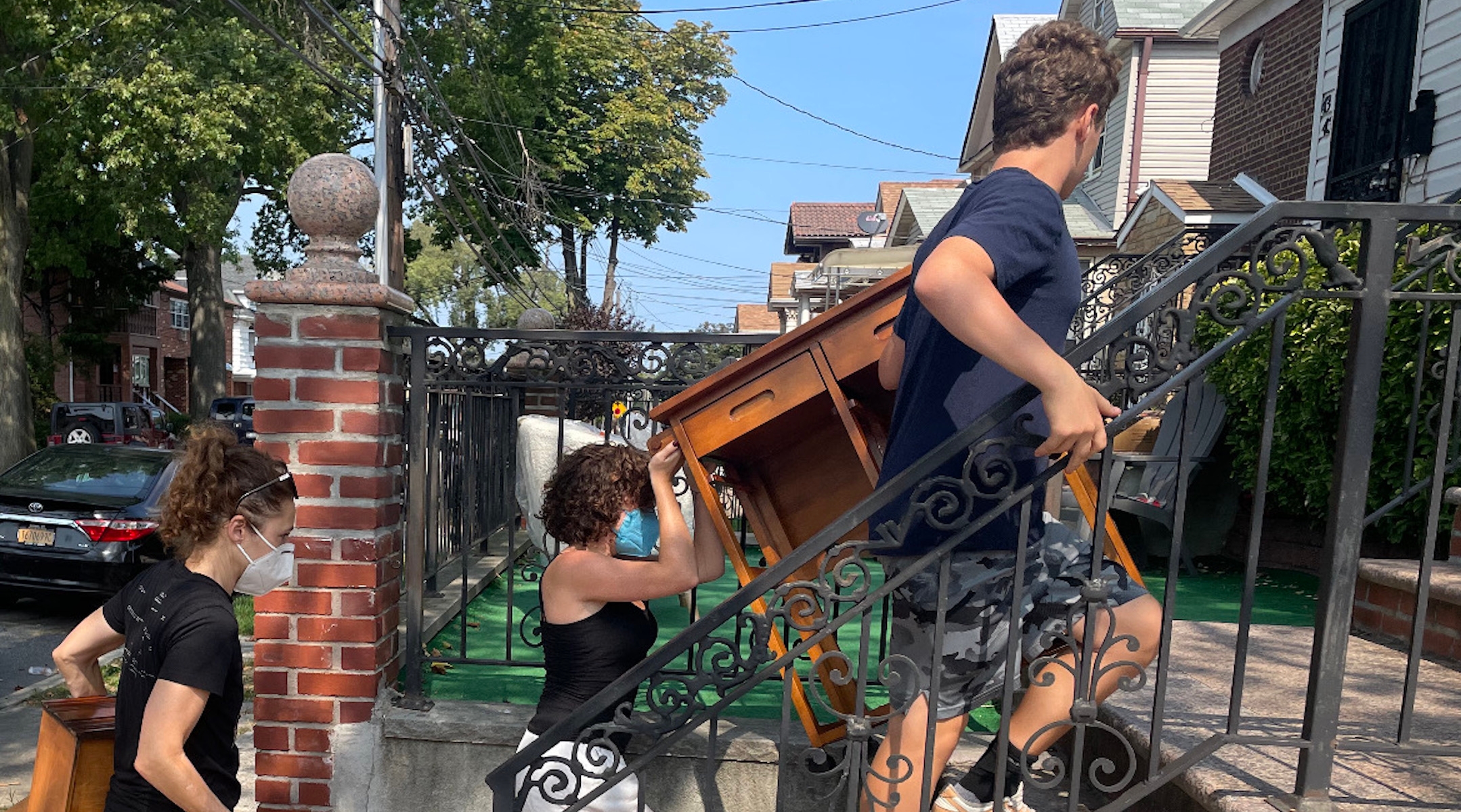 S. had left Pakistan for New York hoping to provide a better, healthier life for her younger brother R., who has Down syndrome. After a year of moving around the city, applying for asylum and trying to get on her feet, S. — who asked that her name not be used while the rest of her family waits for their asylum cases to be approved — found a room in a semi-basement apartment in Jamaica, Queens in March 2022.

But even though they had a roof over their heads, S., 44, and R. hardly had any household items to their names. Instead of beds, for example, they slept on a shared rug on the floor.

Enter Ruth’s Refuge. The Brooklyn-based nonprofit aims to provide New York’s refugee community with items needed to help jumpstart their new lives and fill their homes. The organization helped S. and R. secure many household essentials both large and small, from mugs to furniture.

“It’s one thing if you’re going to drop something on a doorstep; it’s another to bring every single thing into my house and help me set it up,” S. told the New York Jewish Week about the assistance she got from Ruth’s Refuge. “We cannot do much because it’s only me and R. But they did everything — every single thing. To be very honest, I’m really blessed.”

Ruth’s Refuge emerged from a task force at Congregation Beth Elohim in Park Slope that started in 2016 as a response to an influx of refugees fleeing Syria. Since then, they’ve expanded to a team of 120 volunteers and three full-time staff dedicated to meeting the needs of the thousands of refugees arriving in New York — first from Syria, then from Afghanistan, South and Central America and Ukraine. Last year, Ruth’s Refuge furnished over 100 households, providing more than $150,000 worth of furnishings and home goods, mostly accumulated from individual donations.

“I grew up embedded in the Jewish community and very much raised with the concept of ‘never again,’” said Leah Cover, the organization’s founder and executive director. “I always viewed that in a very universal way, that ‘never again’ meant for anybody, not just the Jewish people.”

“The idea that you would have this kind of thing repeating itself when we built the refugee system in response to the Holocaust, primarily, and then to have it just completely break down when it was most needed again was just really horrifying to watch,” she added.

Ruth’s Refuge joins a cadre of other Jewish-aligned organizations that endeavor to create softer landings for refugees in New York. Among them are Masbia, which has been meeting arriving migrants at Port Authority Bus Terminal with shoes, clothing and food, and New Neighbors Partnership, which matches incoming refugee families with small children with a New York-based family to receive clothing, toys and advice. HIAS, one of the largest refugee resettlement agencies in the country, was founded in New York City in 1902 to aid incoming Jewish refugees fleeing persecution and pogroms in Eastern Europe.

Cover said watching the worldwide response to the Syrian refugee crisis animated her to start the refugee task force at the Reform synagogue and eventually found Ruth’s Refuge — named for the biblical figure Ruth, who was welcomed as a stranger and integrated into the community. “One of the very heartening things in starting the refugee task force was just seeing how much the Jewish community wanted to be involved in a response to this and making sure that we lived our values,” she said.

At first, Cover and other volunteers fielded a lot of “ad hoc requests,” she said. Over time, resettlement agencies began to rely upon her team more and more, especially to help with apartment setups — including managing donations of homegoods, renting U-Hauls to transport them and assisting with building furniture.

Ruth’s Refuge became its own independent 501(c)(3) organization in the spring of 2019. These days, they work with a number of resettlement agencies, primarily HIAS, Catholic Charities, International Rescue Committee and Queer Detainee Empowerment Project.

Once asylum seekers have secured permanent housing, Ruth’s Refuge will assign each family a volunteer who acts as a personal shopper. Generally there is no limit to the amount of furniture a family can pick out — as long as it fits in their home, although for certain items like dish sets and TVs, Ruth’s Refuge can usually only provide one per family, Cover said.

The items, housed in storage units in Gowanus, are then packed up and delivered all over the city by teams of volunteers.

Kathy Fennelly, a retired professor of public policy and immigration policy, is one such volunteer. “I’ve worked on advising immigrants on immigration policy for a number of years,” she said. “But this is the first [organization] I’ve ever seen that has such a focused and specific mission to work with immigrants and refugees in order to be sure that they have the basics that they need in their apartments.”

Fennelly has been a part of the organization since it was founded at CBE, and said its mission strongly reflects the Jewish value of welcoming the stranger. “Everyday, I get to say, ‘Welcome to New York. I’m really happy that you’re here,’” she said.

As for S., Ruth’s Refuge helped her and R. secure a hair dryer, soap, towels and a table. Their modest room wasn’t big enough for two beds, so a bunk bed was ordered on Amazon and volunteers helped build the furniture when it arrived. 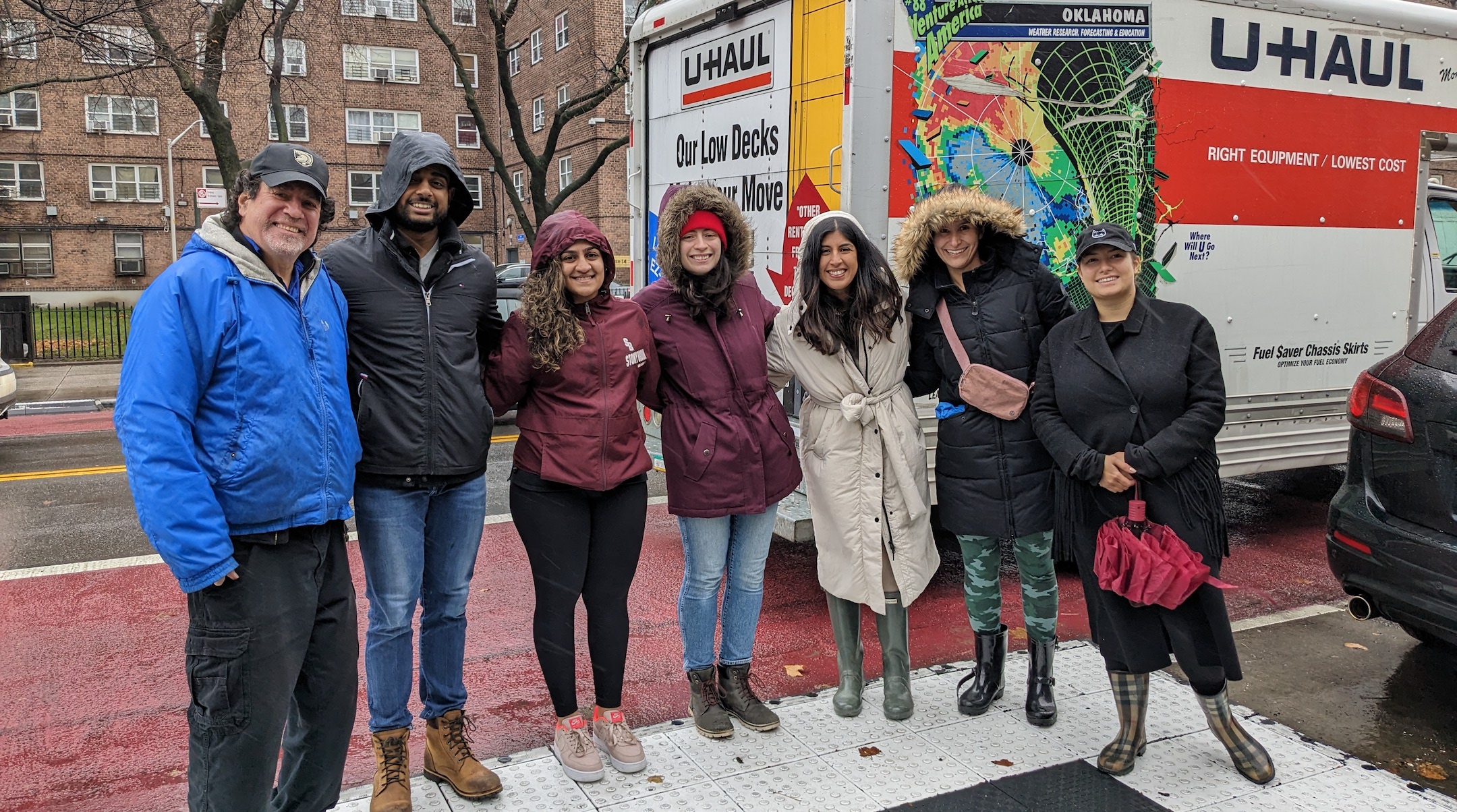 A group of volunteers from Ruth’s Refuge smile in front of a U-Haul van hired to bring furniture and household goods to a refugee family. (Courtesy Ruth’s Refuge)

S. had left Pakistan in February 2021 with R. with the intent to visit Chicago, where her father had relatives, and then New York, which she had visited before. She had planned to stay a few weeks; traveling with her brother, she assumed it would be a harrowing journey —  in Pakistan, she said, her brother’s Down syndrome was often met with contempt, anger and confusion.

Here in the United States, however, S. was surprised by the degree of acceptance, warmth and respect shown to her brother. That’s why she came to believe immigration was necessary: As S. told the New York Jewish Week, she felt her and her brother’s lives were at stake, so she applied for asylum in April 2021.

S. learned their asylum applications were approved at the end of October 2022. Catholic Charities then helped S. and R. get IDs, Social Security numbers and health care, and also provided a few hundred dollars a month to help them get on her feet.

These days, S. works as a home health aide. “It’s becoming home,” she said. “It’s surprising because I was raised in Pakistan, but I never felt like this in my country.”

Left behind in Pakistan are her husband, two other brothers and her 21-year-old son. But her son’s asylum application was approved last month, she said, and she thinks her husband’s will be soon as well, so she’s optimistic they’ll be able to join her in New York later this year.

“I buy things [now] because I can save the money for it,” S. said. “But the first step was Catholic Charities and the second step was Ruth’s Refuge.”